It was going to take something remarkable to overshadow Rafa Benítez's Newcastle United exit. Ayoze Pérez‘s switch to Leicester City is just that.

In what has already been a trying week for long-suffering Newcastle fans thanks to the departure of the hugely popular Benítez, news of Pérez following his countryman out the door has not been well received.

And the exact figure Leicester have paid is believed to be just £16million, per the sign the forward to a four-year deal.

Either way, it is another blow for the Magpies and whoever succeeds Benítez on Tyneside. Thanks to a flurry of goals in the final weeks of the season, Pérez finished with 12 strikes to his name – more than anyone else at St. James' Park.

But why? The 25-year-old has never torn the Premier League apart – Barcelona – and has given little indication he ever will, scoring a respectable but hardly earth-shattering 42 times in 179 league appearances for the Magpies. 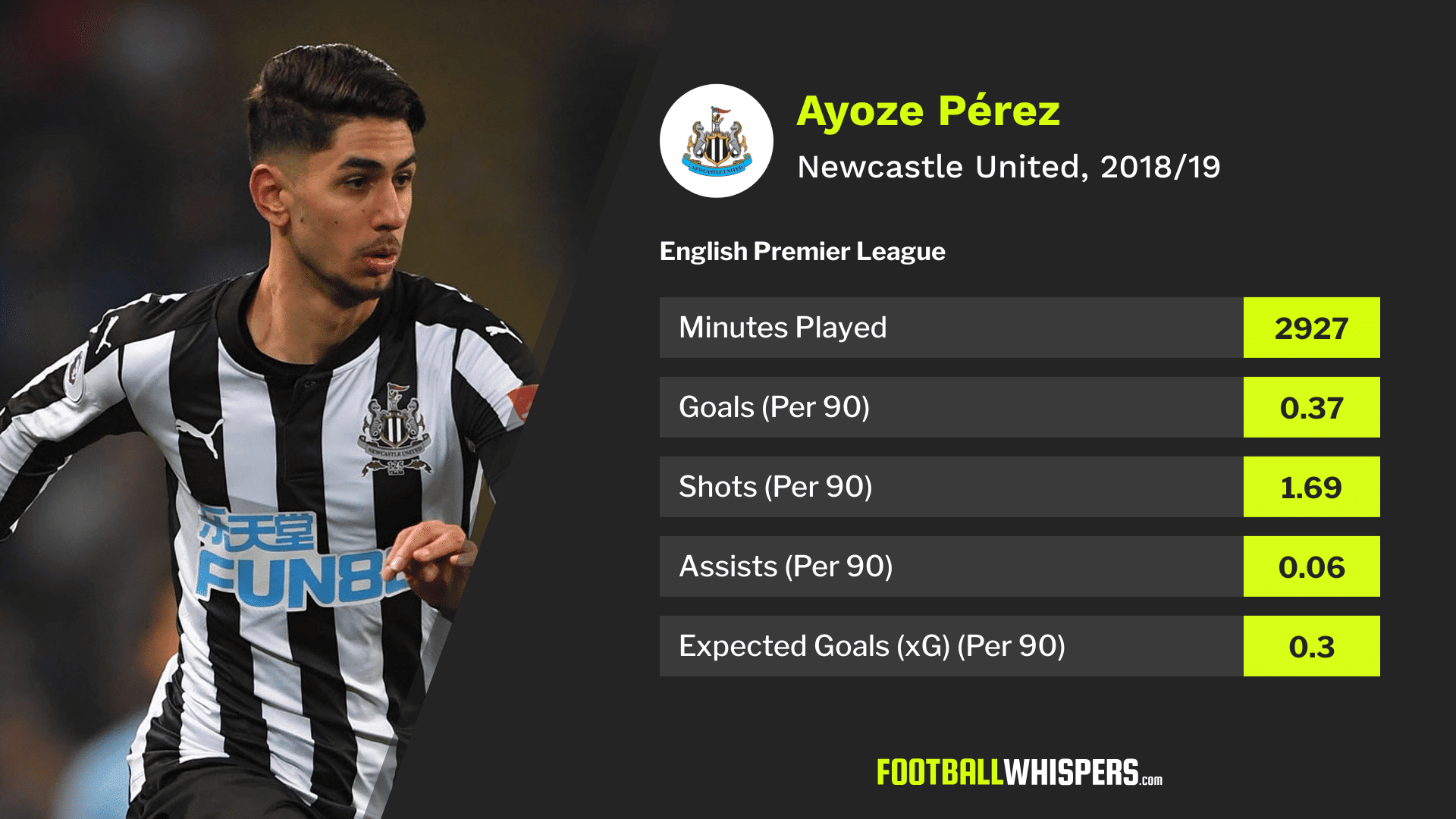 Furthermore, Leicester are hardly light in the final third. Even at 32, Jamie Vardy remains a constant menace and has netted 75 Premier League goals in the last four seasons. Behind him are the young and hungry trio of James Maddison, Demarai Gray and Harvey Barnes. The Foxes arguably have the most exciting attacking quartet outside the big six.

But in Pérez, Rodgers has evidently seen something which will complement what he has at his disposal already. The answer might lie in what the Spaniard does without the ball, rather than with it.

He is a tireless worker when his side don't have possession.

Only one player – Cardiff City's David Hoilett, in almost 800 minutes fewer – managed more interceptions than the workaholic forward last season, registering 1.32 per 90, while Pérez was fifth for attempted tackles (1.87 per 90) among his fellow forwards. 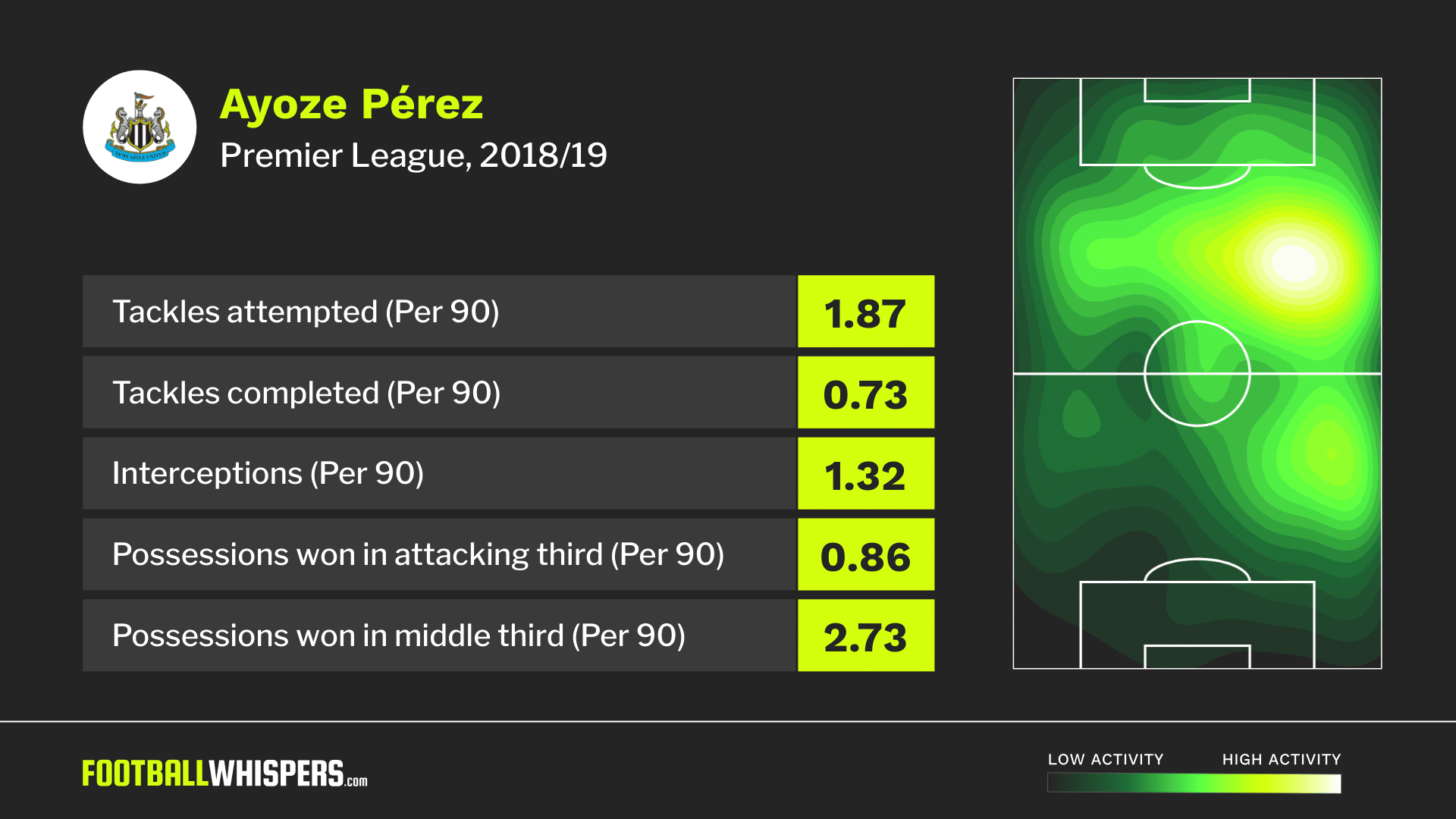 That will come as a surprise given to anyone who has pigeonholed Pérez as a kind of flighty, fleet-footed, work-shy No.10 who only comes alive on the ball. As the numbers above underline, that could not be further from the truth.

If Rodgers' side are to press high, as they have tended to in the past, then a forward like Pérez is a must. For all their undoubted qualities, neither Vardy nor Maddison – the players he could replace directly – are particularly effective or enthusiastic pressers.

The former England international managed 0.19 interceptions per 90 last term and just 0.41 possessions won in the attacking third. Maddison's numbers were 0.41 and 0.44 respectively.

All of which makes for encouraging reading. But it does not answer the question of where Pérez will fit into this Foxes side.

After taking over from Claude Puel on February 26, the Ulsterman oversaw ten Premier League fixtures. After employing a 3-4-2-1 system in his first match in charge, a 2-1 defeat at Watford, he mostly used a 4-1-4-1 system with Maddison, previously deployed as a No.10 by Puel, out on the left. 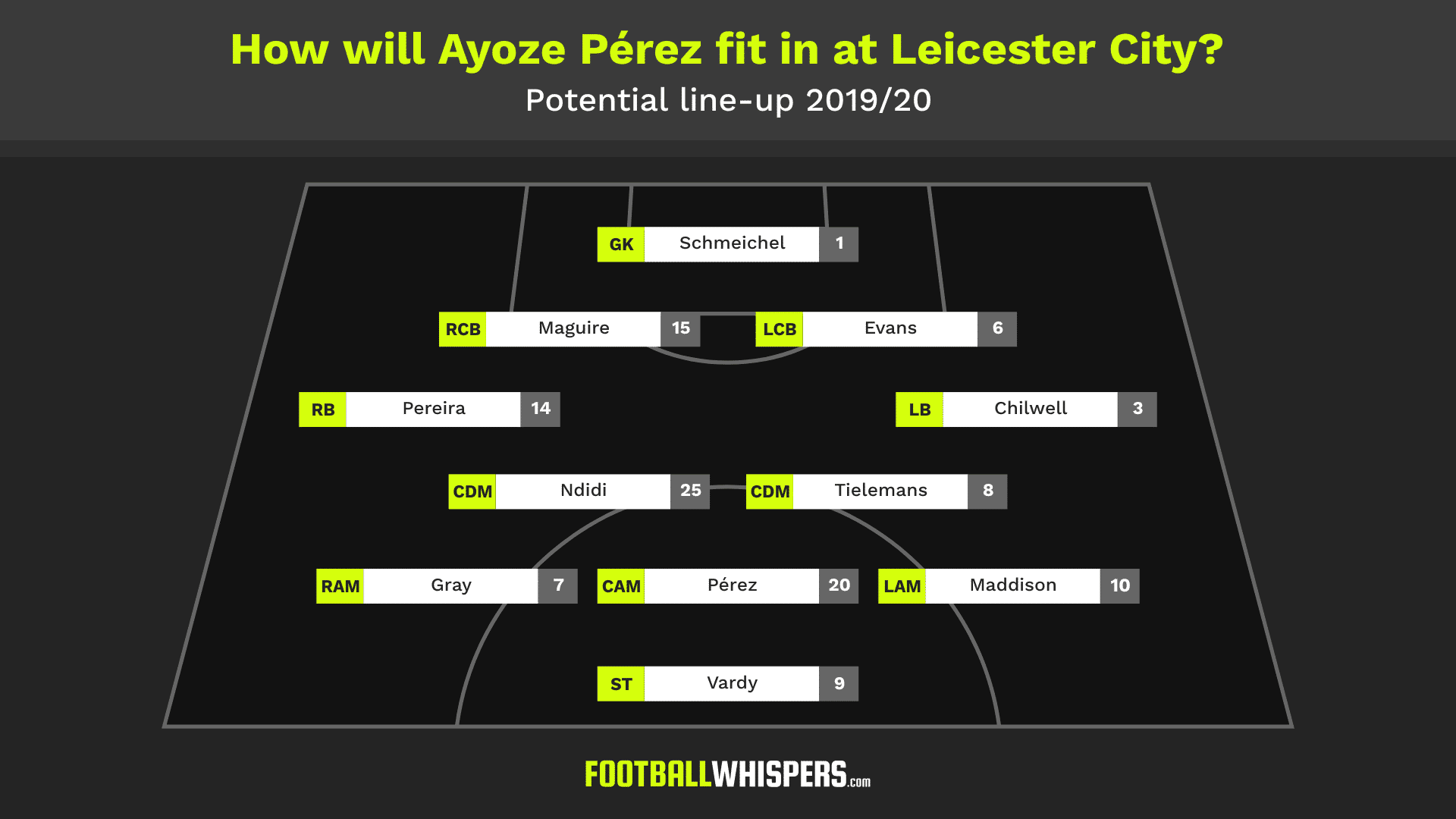 Rodgers has always favoured 4-2-3-1 and so a return to that with Maddison on the left with Pérez at No.10 could be one option. However, muddying the waters further is the impending permanent arrival of Monaco‘s Youri Tielemans. The Belgian shone on loan at the King Power Stadium in the second half of last season and City are expected to pay a club-record £40million to bring him back full-time.

The switch to 4-1-4-1 allowed Tielemans to play alongside someone else in midfield, usually Hamza Choudhury or Maddison, with the insurance policy of the tireless Wilfred Ndidi behind him. However, playing Tielemans alongside the Nigerian at the base of a 4-2-3-1 would not only stifle 22-year-old but leave the Foxes vulnerable.

There is plenty to get excited about at Leicester this summer – even if Harry Maguire eventually leaves for Manchester United or Manchester City. But it is unclear how they will line up and Rodgers will have to use a fox's cunning to crowbar all his attacking talents into a balanced team.