In 1977, Pele famously declared that an African nation would win the World Cup before the year 2000. While those lofty forecasts never quite materialised, the 1990s did see the continent produce its first genuine global star.

In 1995 the sensational George Weah was named FIFA World Player of the Year. Over two decades, the now retired striker remains Liberia’s most recognised and iconic star ever, and is set to conquer the political world by becoming his country's president.

The undisputed king of African sport did not have the easiest of starts, which makes his ascent to footballing royalty all the more fascinating.

Born into poverty in 1966, Weah did not always seem destined for greatness. Growing up in the ghetto of Clara Town, in the suburbs of Liberian capital Monrovia, the youngster could have easily followed a similar path to many others.

Despite unearthing a clear natural talent for football at a young age, a fledging career in his homeland offered no guarantees for the upcoming striker. In fact, through the majority of his early career, the 6ft-tall star had to support his footballing career by working as a switchboard technician.

On the pitch, Weah’s first season as a professional ended with his club side Mighty Barrolle clinching a domestic double, with the youngster playing a key role in both the league and cup triumphs.

A transfer to city rivals Invincible Eleven would bring similar success as the athletic striker’s ratio of over a goal a game fired his new club to the title. During this time, his growing reputation was rewarded with an international debut, in which the striker scored against Nigeria.

In his homeland, he had quickly established himself as the country's finest, but while a career in Liberia would offer continued affection from locals, it could not transform his sizeable dreams into reality.

His first move abroad came via a switch to Cameroonian outfit Tonnerre Yaounde, where he continued to score goals and bamboozle defences for fun. But, like any Liberian footballer, the striker needed a break.

With the scouting networks of European clubs still extremely primitive compared to the modern game, some coaches were ahead of the curve.

Arsene Wenger, then at Monaco, was one of them, and in 1988 the Frenchman brought the promising 21-year-old to the principality club in a move that would serve as a catalyst not only for Weah himself, but for African players in general.

Weah wasted no time in carving out a name for himself in Europe; his first season in France’s top flight produced a total of 17 goals – leading to a first African Footballer of the Year award in 1989.

By his end of his third campaign at the Stade Louis II, the Liberian had been crowned France’s Foreign Footballer of the Year and helped Les Rouges et Blancs to its fifth Coupe de France, scoring five times en route to the 1-0 final win over Marseille.

In four seasons at Monaco, the striker had evolved from prospect to prolific marksman; from local hero to European recognition; from boy to man. Weah had scored over 60 goals under Wenger’s guidance, performing especially well in the club’s run to the UEFA Cup Winners’ Cup in 1991/92. But his next move would be where the superstar would truly start to put Liberian football on the map.

Paris Saint-Germain would be Weah’s chosen destination, and it didn’t take long for the 26-year-old to acclimatise. The Liberian’s first season at the Parc des Princes ended with more silverware as the Parisians beat Nantes to win the Coupe de France, a cup that they would win again just two years later.

Meanwhile, Weah was finding the target with the same regularity seen at each of his previous clubs. Perhaps more noticeably, the dazzling skills and bursts of pace were now complemented by an intense maturity; Liberia’s sporting icon was ready to cement his place among the very best of his generation.

After an eight-year wait, PSG finally clinched the second Ligue 1 title in their history in 1993/94, with Weah’s influence – alongside the likes of top scorer David Ginola – proving pivotal throughout the campaign.

Those individual and team successes helped the Liberian land his second African Player of the Year crown for 1994. By then, though, he was already on his way to achieving arguably his greatest personal accomplishment.

Domestically, Weah was not quite at his best for PSG during the subsequent 1994/95 campaign, although the striker did still register seven Ligue 1 strikes. However, seven was also his lucky number in the prestigious Champions League; his goals fired PSG to the semi-final stage of club football’s greatest competition, landing the Liberian the tournament’s top scorer award and catapulting him into the very highest bracket of 90’s strikers. 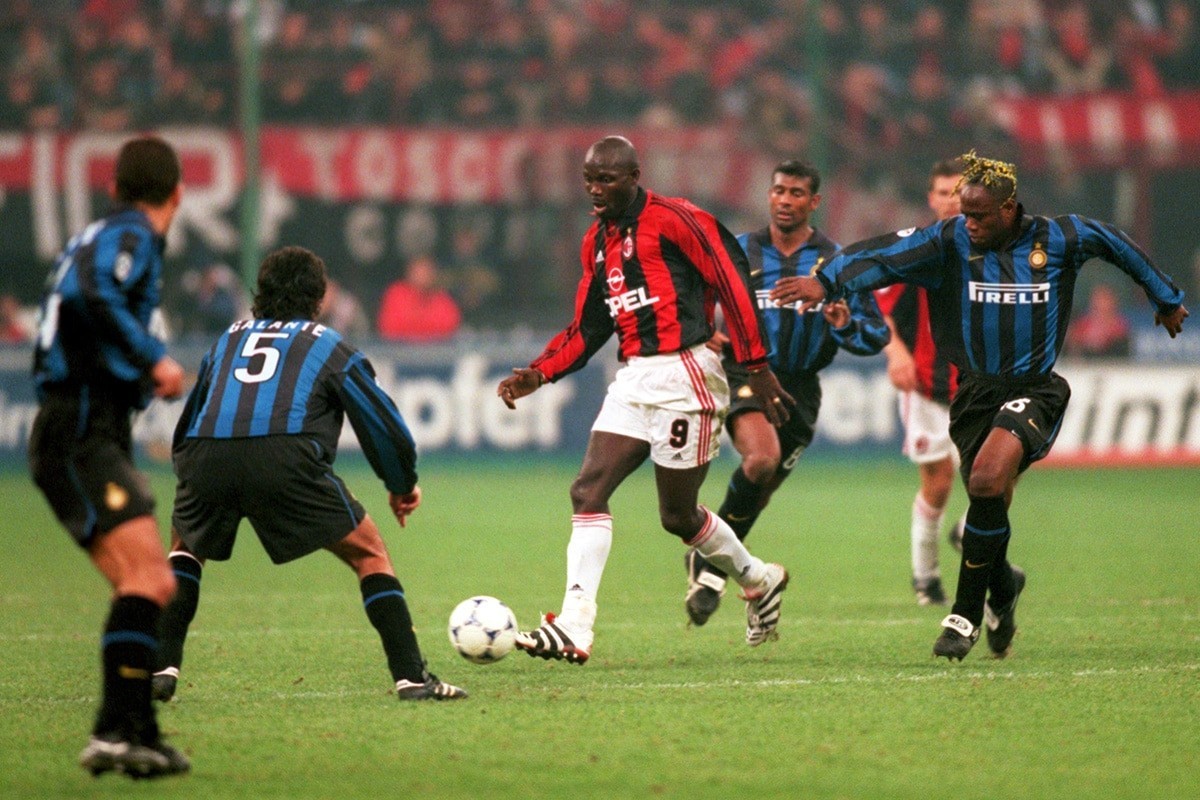 Perhaps more importantly, those Champions League endeavours saw a clasp of Europe’s biggest clubs clamour for the Liberian’s services. At a time when Italian football was considered the pinnacle, Fabio Capello’s AC Milan won the war. Weah traded blue and red for red and black with high hopes of becoming a legend. Within months of his San Siro arrival, his place in history had been assured.

With Gianluigi Lentini blowing hot and cold and the tragic premature retirement of magical Dutchman Marco van Basten, Weah was tasked with firing Milan to silverware. He could not have asked for a better start to his Milan career, netting just seven (that lucky number, again) minutes into his Serie A debut. When a crucial double followed in the early season trip to Roma, the Liberian was well on his way to becoming as popular in Italy as he was in France.

Weah’s calendar year of 1995 could have scarcely gone better: he’d already won two domestic cups and been the Champions League’s top scorer prior to his Milan arrival while his immediate impact in the, at that time, world’s toughest division verified the consensus that the Liberian had reached the very top. After landing another African Football of the Year award, he scooped the BBC’s version of the crown too. But the best was yet to come.

We now regard January 8, 1996, as one of the most significant dates in African sport. After an incredible rise to prominence, underlined by a truly incredible 1995, George Weah was announced as World Footballer of the Year. With over double the voting points of second-placed Paolo Maldini, Weah’s victory was one for himself; for the underdog, and for Africa.

Liberian football was now well and truly on the map, and it couldn’t have come at a more important time. The beautiful game has an unrivalled ability to unite fighting factions. Weah’s continued brilliance on the pitch was one of the few unifying features throughout the civil war of 1989 to 1997, something that clearly mattered to the player himself.

In addition to his influence from abroad, the striker utilised football as a glue for communities back home, launching a club for troubled kids in his war-torn homeland as a way to help them discover a way back into education and normality. Meanwhile, the striker dragged his national team to its first-ever major tournament as they qualified for the 1996 African Cup of Nations and, while Liberia would drop out at the group phase, the national connection served as a key part in the healing process following an initial ceasefire in 1995. 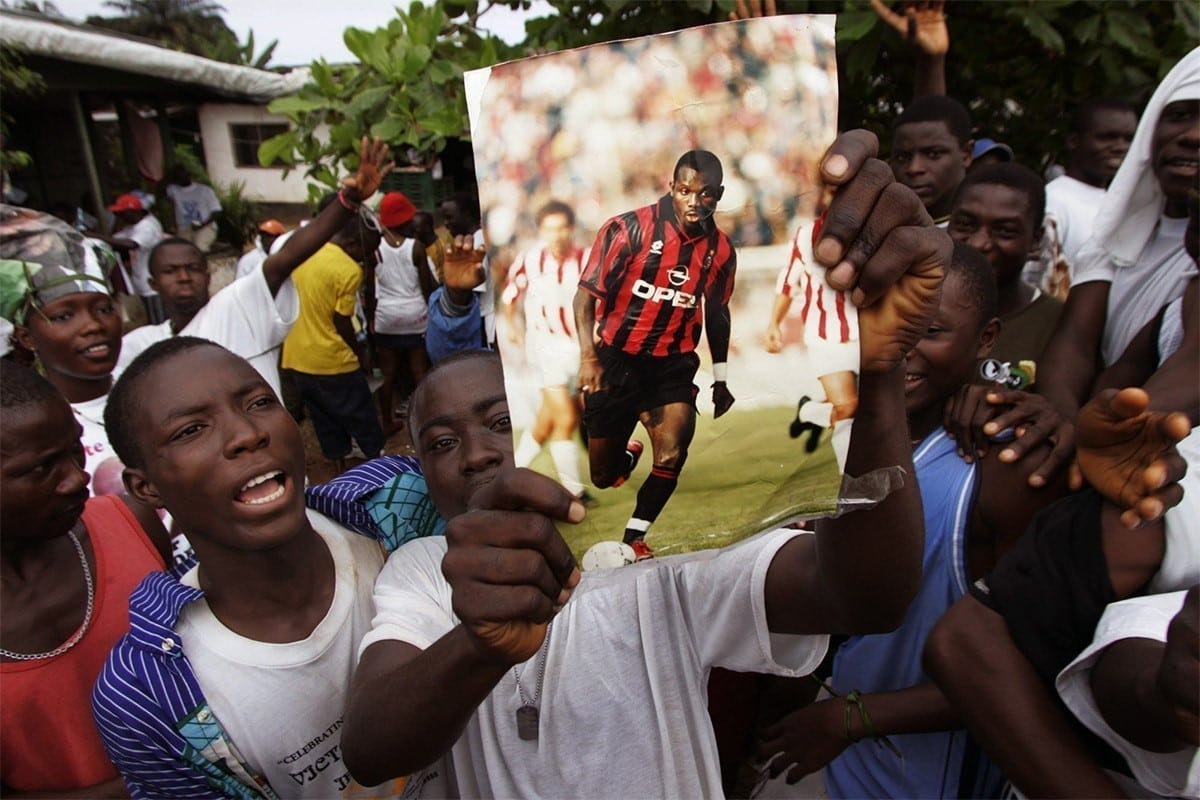 Only a handful of sportsman can claim to have transcended their discipline, but Weah is one. While his impact on and off the pitch had made him a hero back home, Liberia’s most recognisable resident was now a worldwide star. Images of the Liberian’s trademark mazy runs and slotted finishes lit up the second half of the decade particularly as the superstar was often able to step it up against the big boys of the era, with Juventus, Roma, and Lazio all succumbing to his glorious talent.

Perhaps his most iconic Milan goal, however, is etched onto the retinas of all Football Italia fans of the era: after calmly controlling the ball in his own box, Weah embarked on a 100-yard sprint, carving his way through half of the Verona team before coolly slotting past the goalkeeper. A mixture of instinct, athleticism, and mastery, the strike encapsulated everything that made the striker one of the most gifted players of his time.

It took just one season for Weah to lift his first Scudetto. While the team capitulated following the departure of Fabio Capello, missing out on Europe for each of the subsequent two campaigns, the Liberian continued to thrive, finishing each of his first three campaigns in Milan as the club’s top scorer. The striker nearly retained his Ballon d'Or crown too, coming second only to Ronaldo in the 1996 voting. Weah’s final full campaign in Italy ended with another league title.

Despite playing fairly regularly during the first half of the 1999/2000 season, he was loaned to Chelsea in January 2000, becoming an instant cult hero at Stamford Bridge thanks to a memorable debut winner against rivals Tottenham Hotspur. Weah and the Blues went on to lift the FA Cup that year.

Now in his thirties, Weah’s time at the top was slowly coming to an end. Following his release from AC Milan – a club still struggling to recapture the glory days of the Weah era – he had spells with Manchester City and Marseille before heading to the United Arab Emirates with Al-Jazira. Meanwhile, his goals fired his country to another African Cup of Nations appearance in 2002, where he scored the opener in his country’s 1-1 draw with Mali. Liberia did crash out at the group phase again but, with the country devastated by a second civil war, the unity of football served as a sense of escapism for the West African nation.

Since retiring, Weah has shown himself to be equally influential in his homeland, using his presence to help unite Liberia as a senate. Meanwhile, his legend lives on in Europe through son Timothy, who is excelling in PSG’s youth academy and is expected to have a very bright future ahead of him in the game. Eldest son George Jnr also previously spent time playing in France.

Regardless of what Timothy may go on to achieve in the game, nobody could ever replicate the impact of Africa’s first ever World Player of the Year. Not only did the African Player of the Century’s talent paved the way for the continent’s future stars to thrive in Europe’s big leagues – as well as Senegalese Ali Dia, who famously conned then Southampton manager Graeme Souness into signing him by pretending to be Weah’s cousin in 1996!

Weah treated a generation of supporters across the world to some of the best attacking play ever witnessed – he truly was a gift sent from football heaven.

And now, further emphasising his status as a man of the people and hero in his homeland, Weah is on the brink of becoming the next president of Liberia. The former Milan superstar initially ran for office in 2005, but was deemed to lack political experience at the time. Since then, he has become a senator, and polls suggest he is set to take a 70 per cent share of the vote in the upcoming election.