Der Klassiker took on added importance on Saturday with Bayern Munich having the chance to take advantage of Borussia Dortmund’s inconsistent early season form by stretching their lead over their rivals to 9 points. It’s not an exaggeration to suggest, even though we’re only in November, a win for Bayern would have ended Dortmund’s title challenge.

It’s one thing going into a match against a title rival knowing a win gives them an advantage, it’s a completely different feel knowing a loss could end your challenge before the winter break. How would Dortmund handle the latter when they’re so used to the former?

It's by no means an unassailable lead but it would have meant Dortmund not only needed an almost perfect rest of the season but they needed Bayern to lose at least three matches in a league they usually dominate. For added context here, Bayern only lost two league games in the entirety of 2015/16, five league defeats in 2014/15 and two in 2013/14.

There must have been trepidation in Thomas Tuchel’s pre-match build up. Last season he saw his Dortmund side lose 5-1 in the first Klassiker. But at the same time, this isn’t Pep’s big, bad Bayern capable of not just beating a team but dismantling them. There’s a lacklustre feel under Ancelotti and Bayern had already drawn matches that should be a formality for the German giants against Koln, Frankfurt and Hoffenheim so far in the Bundesliga. There are weaknesses in this Bayern side. Tuchel just had to find a way to exploit them.

It’s unlikely Tuchel would have been criticised if he’d have sent his team out to be defensive and looked to take a point off Bayern. Other managers probably would have done that in an attempt to stay in touch with them but credit to Tuchel, he went in with a clear plan on how he was going to win the game.

The Change in Shape.

Tuchel is by no means a one trick pony. This season alone he’s tried a few different systems – 433, 4231 and 343 – but the one Dortmund used against Bayern was a new one. On paper it was a 532 formation similar to the one Hoffenheim have used this season to great success. 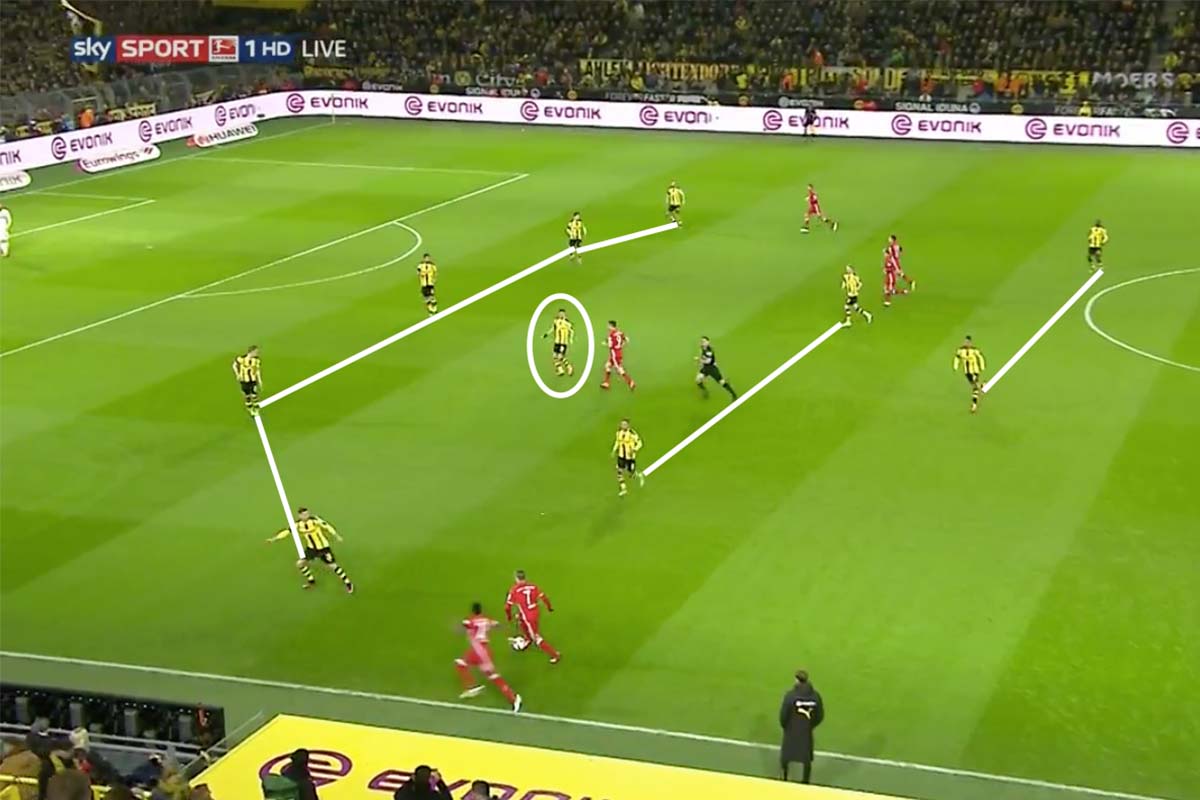 The picture above shows off the Dortmund system. In defence Dortmund had Lukas Piszczek starting as the right wing-back, Matthias Ginter as the right sided centre-back, Sokratis as the middle centre-back, Marc Barta as the left centre-back with Marcel Schmelzer as the left wing-bak. Julian Weigl, circled in the picture above, was the deepest midfielder with Mario Gotze and Andre Schurrle ahead of him. Peirre Emerick Aubameyang and Adrian Ramos were paired as strikers.

The functionality of the midfield three is what was similar to Hoffenheim’s approach and to some extent Liverpool’s new style under Klopp. Weigl would sit in midfield and one of Gotze or Schurrle would play beside him with the other one pushing on to support the front two. Gotze and Schurrle would take turns acting as a box-to-box midfielder and as an attacking midfielder. However when the team is attacking both centre-midfielders will push up to make it a four man attack alongside Aubameyang and Ramos. 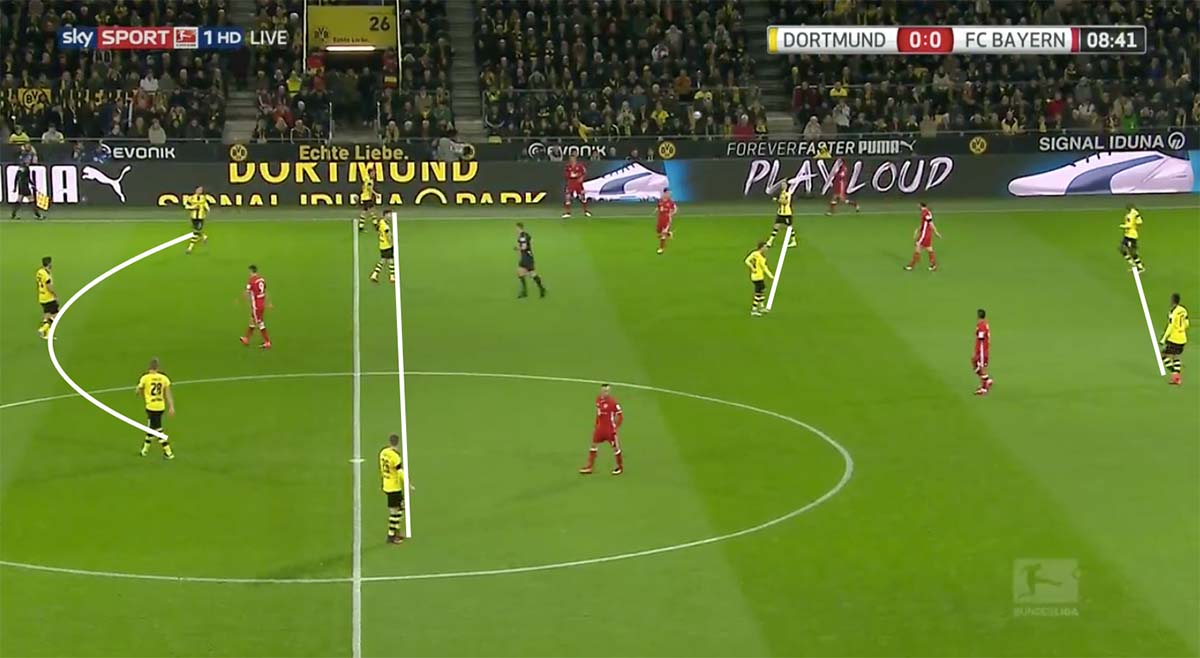 As Dortmund press a little higher as a team the shape evolves into a 3322 formation. The full-backs push on in line with Weigl meaning there are more lines for Bayern to play through and which increases the chances of Dortmund turning over possession and springing a counter attack with the team fairly compact meaning the strikers aren’t isolated. 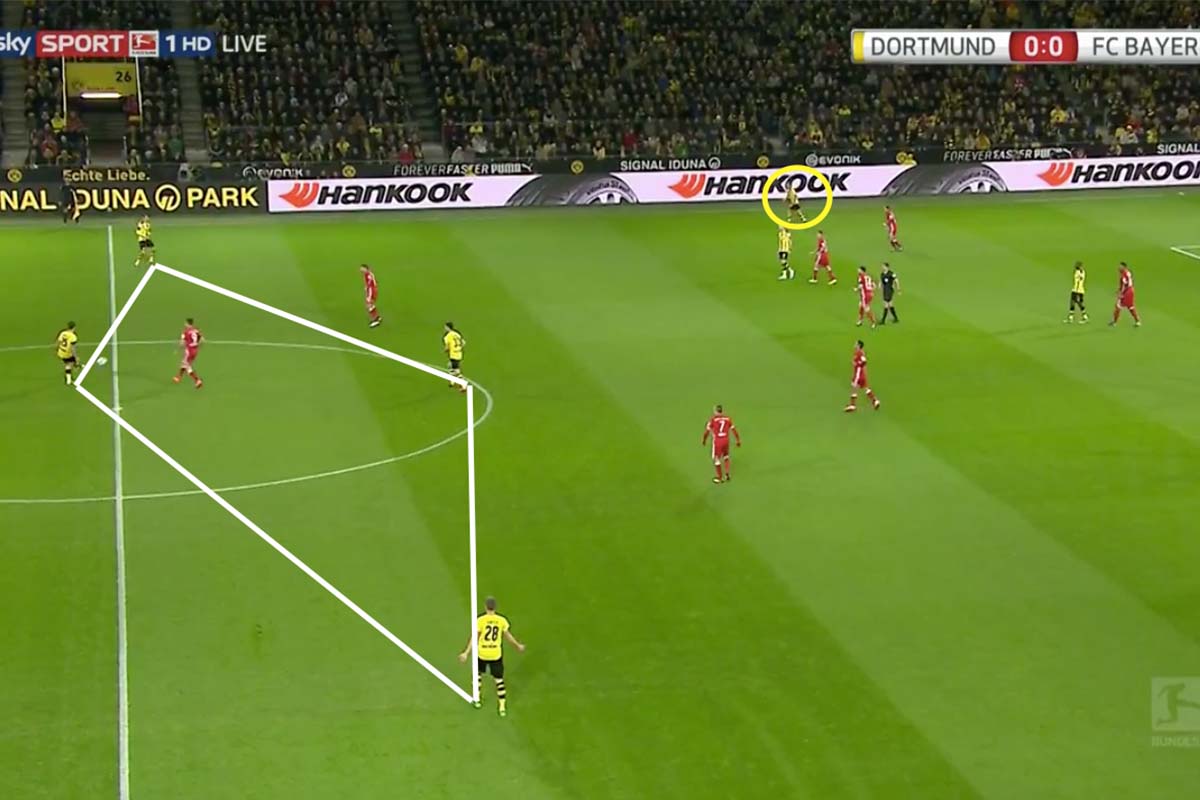 The picture above shows the Dortmund shape when they’re building up from the back. Schmelzer, the left wing-back who is circled in yellow, has pushed up field to take up a position you’d usually expect to see a left-winger in. With both wing-backs being so high up the pitch it creates space out wide meaning there is always space for one of the attacking midfielders to drop into to collect the ball. Bayern can’t dictate it all. The left and right centre-backs have split to take up full-back positions giving Sokratis passing options either side and Julia Weigl has taken up a position which enables him to make up passing triangles with the centre-backs enabling the team to build up from the back instead of going long. It also means there’s a possibility that the centre-backs can carry the ball forward into the space the wing-backs have created . 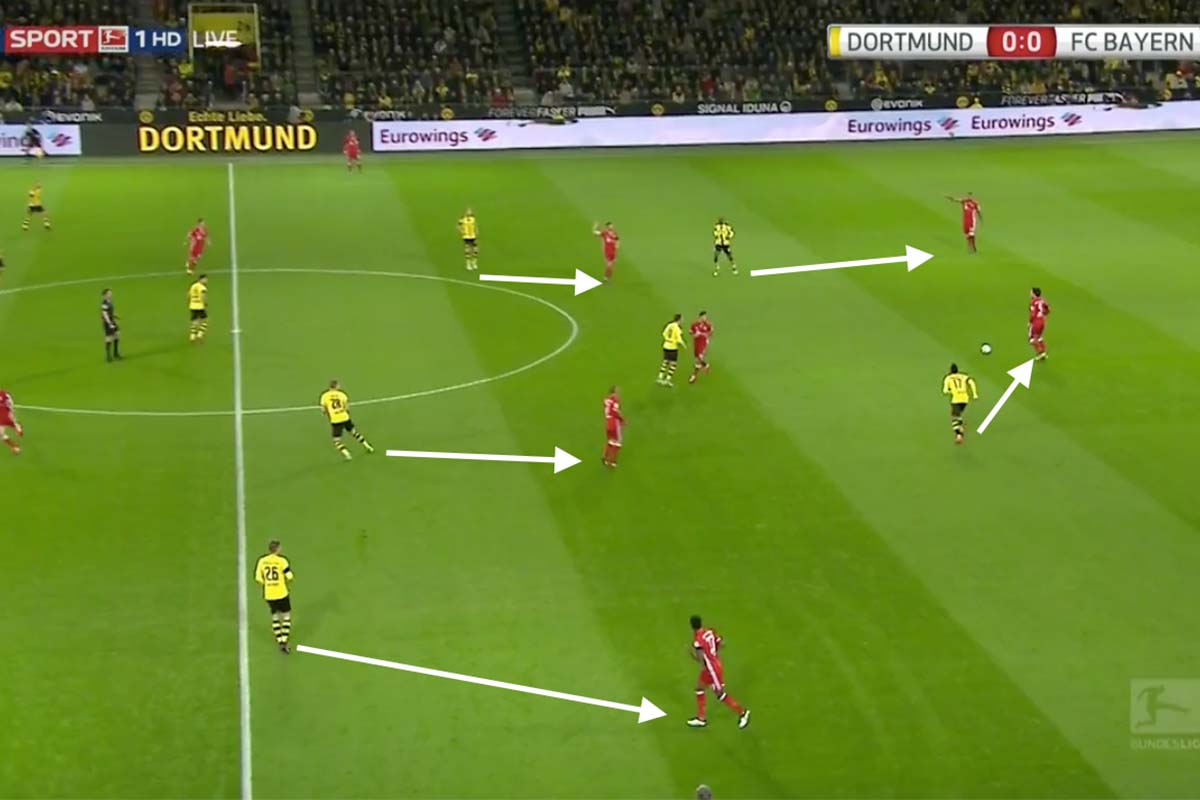 The Dortmund press was in full swing early on in the game as they hunted in packs to force Bayern to play the ball long. In the above picture you can see Aubameyang looking to close down Hummels with Ramos is cutting off the pass to Boateng. Piszczek has pushed on to get close to Alaba, Ginter has tracked Ribery into his own half, Gotze is close to Thiago and Schurrle is taking Alonso out of the equation. 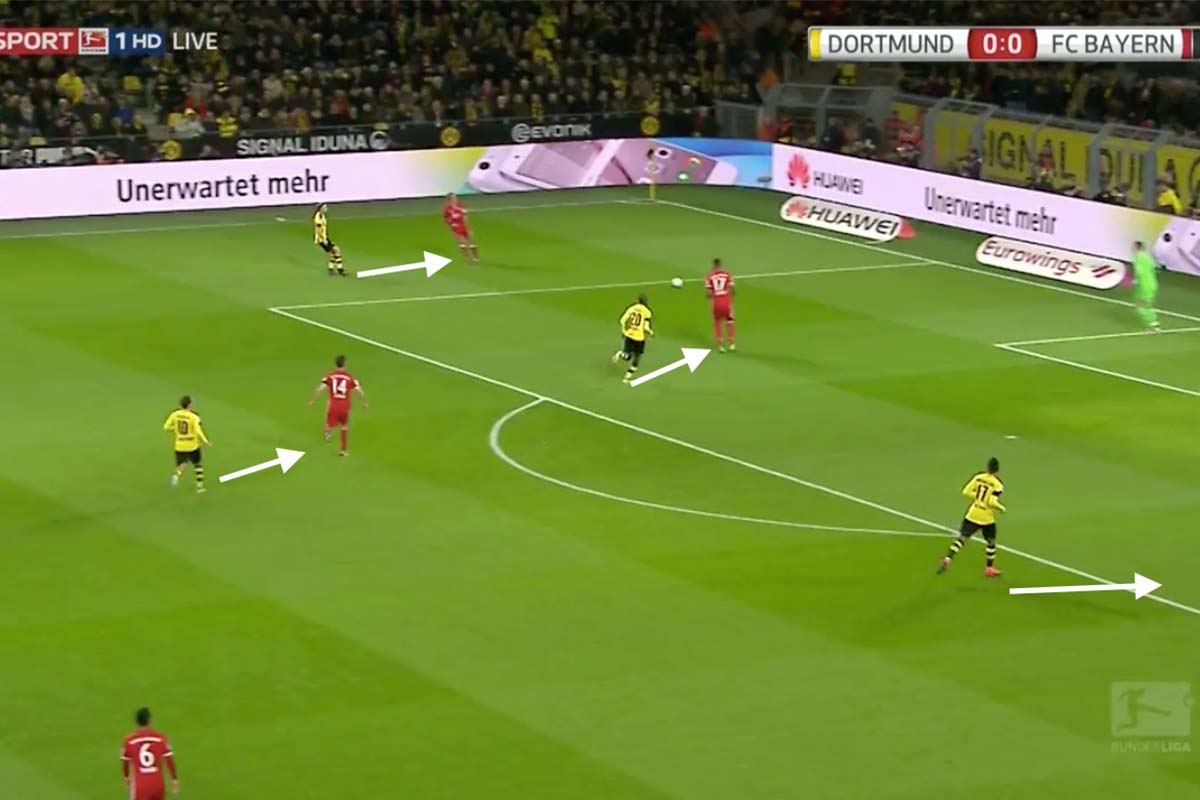 Again Dortmund are in quick to make sure Bayern can’t easily play the ball out from the back. Schurrle closes down the man in possession, Lahm, who is forced to play the ball back to Neuer. Bayern would look to build from the back but as you can see in the picture there’s not really an easy pass on and the German number 1 is forced to go long. Dortmund win possession back and are able to start their attack again.

It was a Dortmund press which lead to the winning goal. 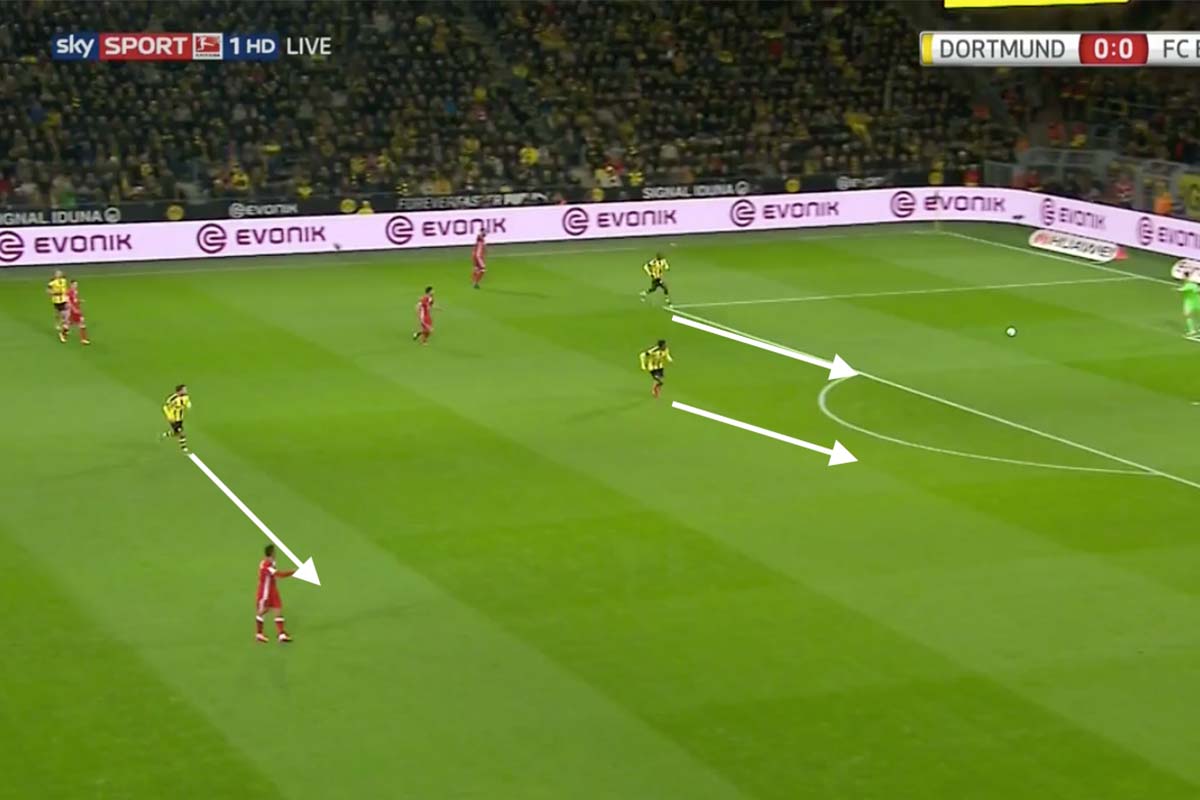 Again you see the ball has been played back to Neuer from the Bayern right and the ‘keeper looks to switch to the left to get Bayern going. Gotze, Aubameyang and Ramos recognise this and move early and quickly in an attempt to get across to Hummels, the likely recipient. 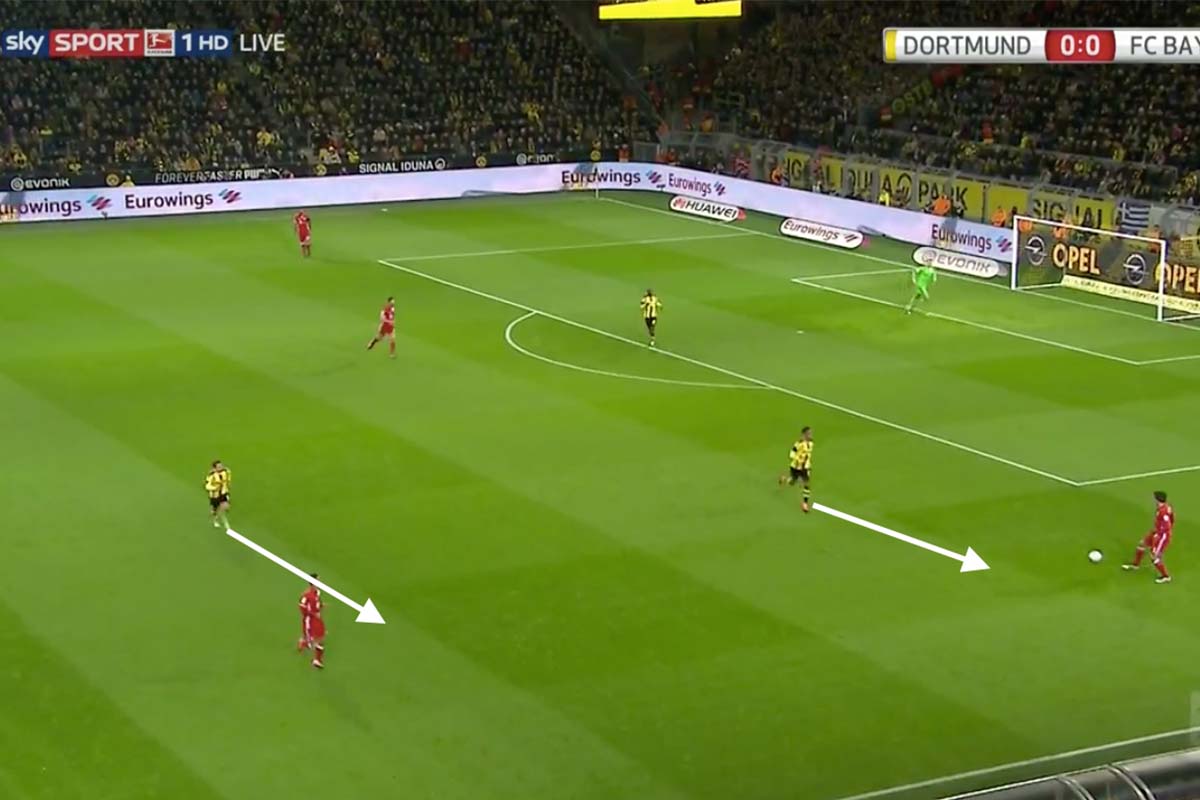 Aubameyang uses his pace to make up the ground and not give Hummels much time on the ball as Gotze gets across to close down Thiago. Ramos has positioned himself between Neuer and Alonso cutting the potential pass to either of those players off. 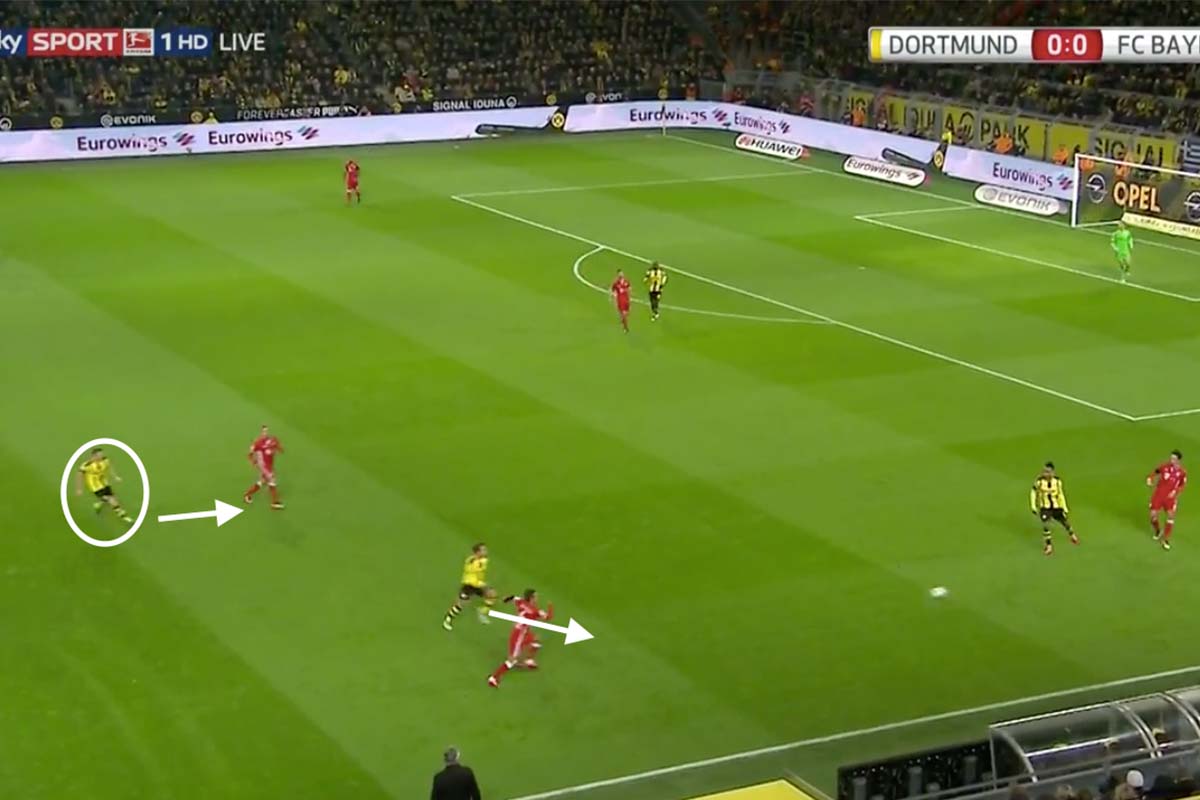 Ribery drops into his own half in an attempt to help build the play but Ginter follows him. Looking at the picture you can see there are two lines of three Bayern players yet only one is unmarked and it’s the one who is unlikely to get a pass. Every other passing option has a Dortmund player close by and the away side are hemmed in. Hummels plays the pass to Thiago but Gotze is quicker than his former Bayern teammate and he intercepts the ball and get’s Dortmund on the attack. 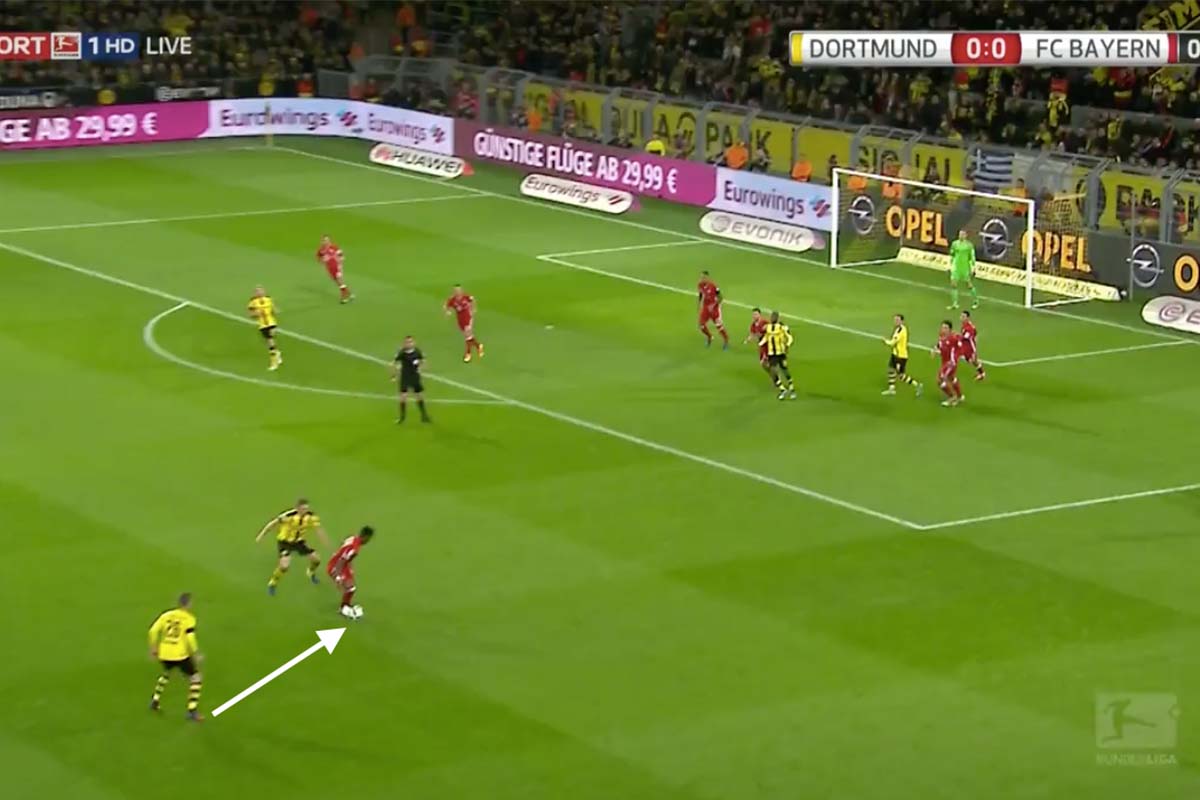 The initial phase of play culminates in a cross coming in from the Dortmund right which is headed away and Alaba picks up the ball. However, the picture above shows before Alaba is even able to set himself he has two Dortmund players on him who eventually win the ball off of the Austrian and Dortmund are able to keep Bayern pinned back. 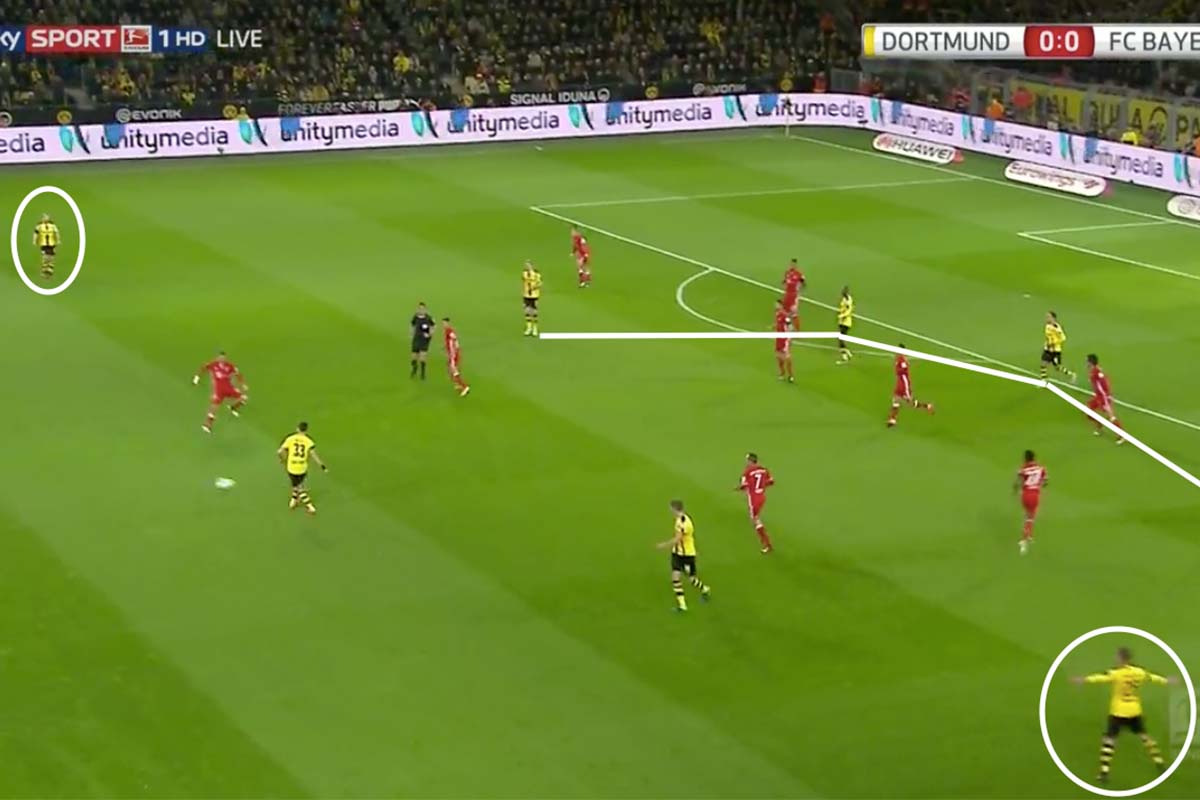 Dortmund regain possession and look to create another chance. You can see in the picture the benefits of Tuchel’s system. Schurrle and Gotze have pushed up alongside Aubameyang and Ramos to make an attacking four. Ginter, who tracked Ribery, is now in a midfield role beside Wiegl with the full-backs offering the width. They’re in an ideal position to not only keep Bayern boxed in but work the ball to create yet another chance. What’s interesting is the press seems to have rattled Bayern who instead of looking at players around them start to ball watch and leave Dortmund players unmarked. 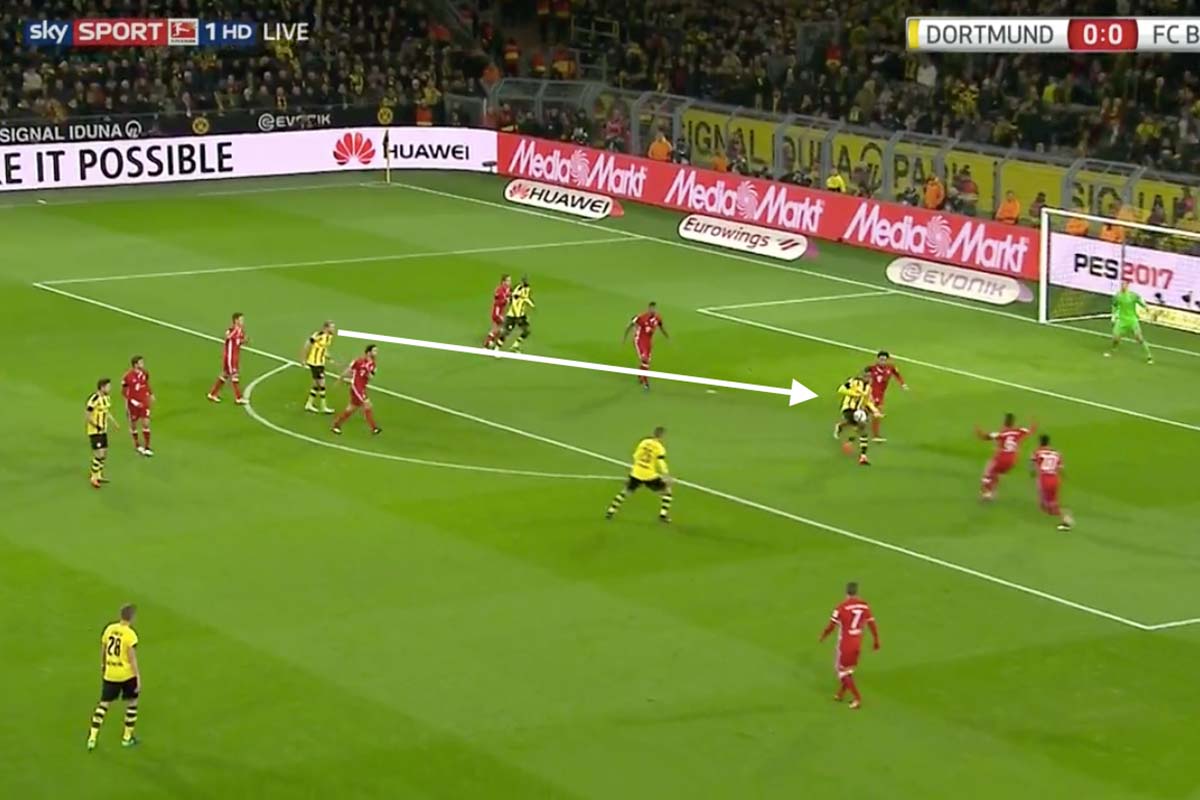 Dortmund get players into the area for a cross which Bayern half manage to clear. The ball goes up into the air as opposed to away and the Bayern players are once again caught ball watching as it falls to Schurrle’s head and he manages to head it down to Aubameyang (shown by the white arrow) who is unmarked in the penalty area. Hummels, Thiago and Alaba all get drawn to Aubameyang and leave Piszczek (edge of the area) and Gotze (to the right of the screen) unmarked. 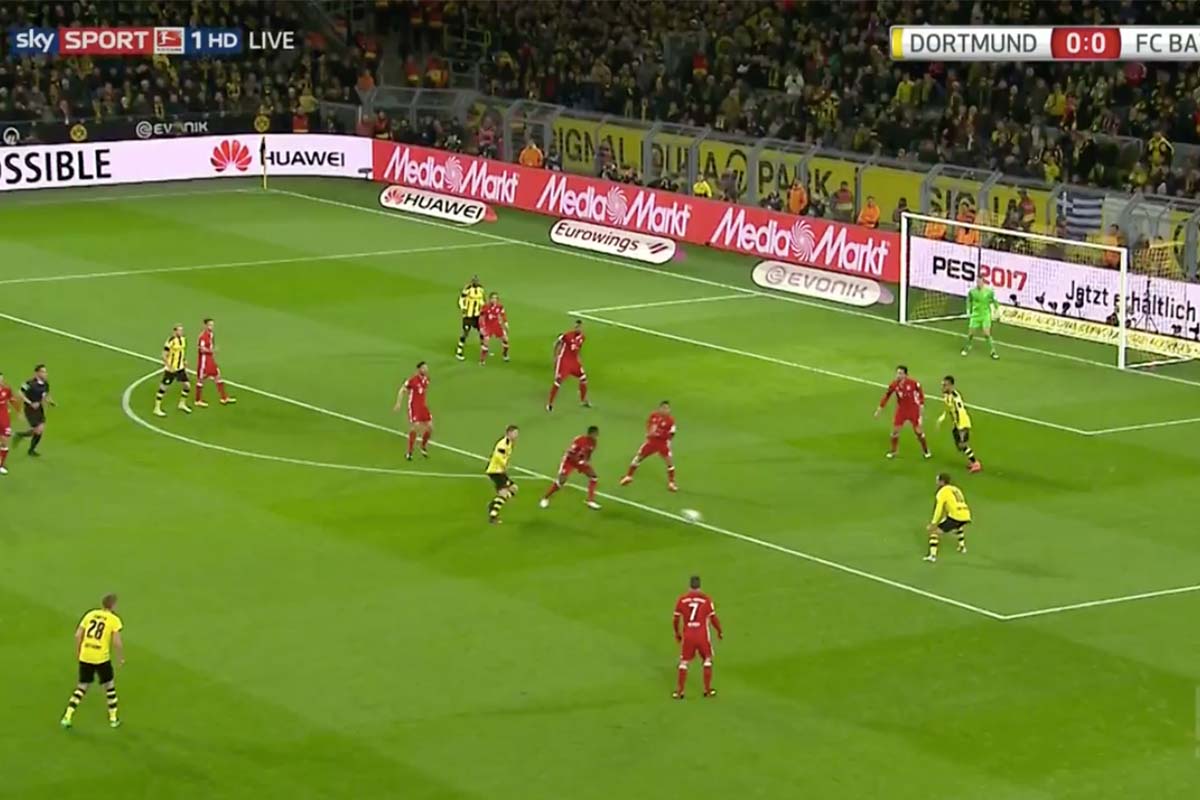 Aubameyang flicks the ball to Piszczek who then plays the pass to an unmarked Gotze after the Bayern players all run out to close down the full-back. Hummels has to square up Gotze which then leaves Aubameyang free in the middle to stab home after Gotze megs his former teammate Hummels. Dortmund’s relentless pressure paid off.

Tuchel’s Use of Dortmund’s Outside CB's 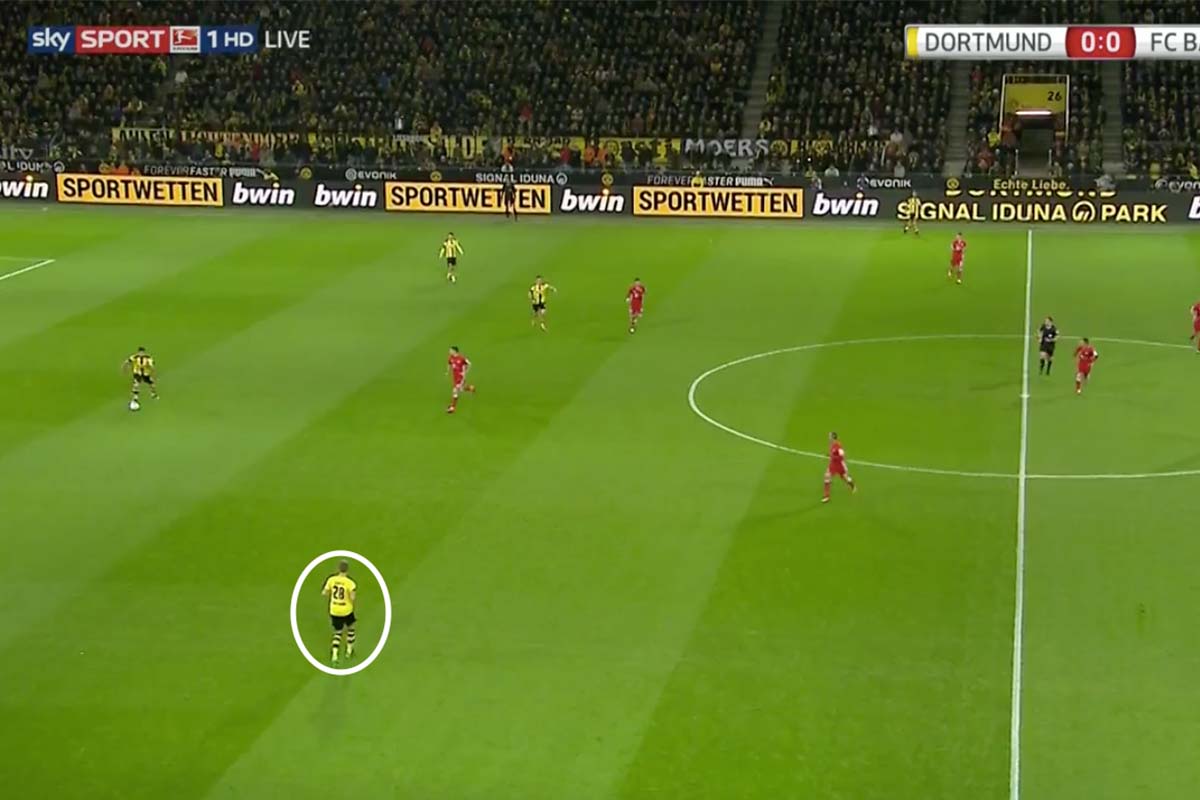 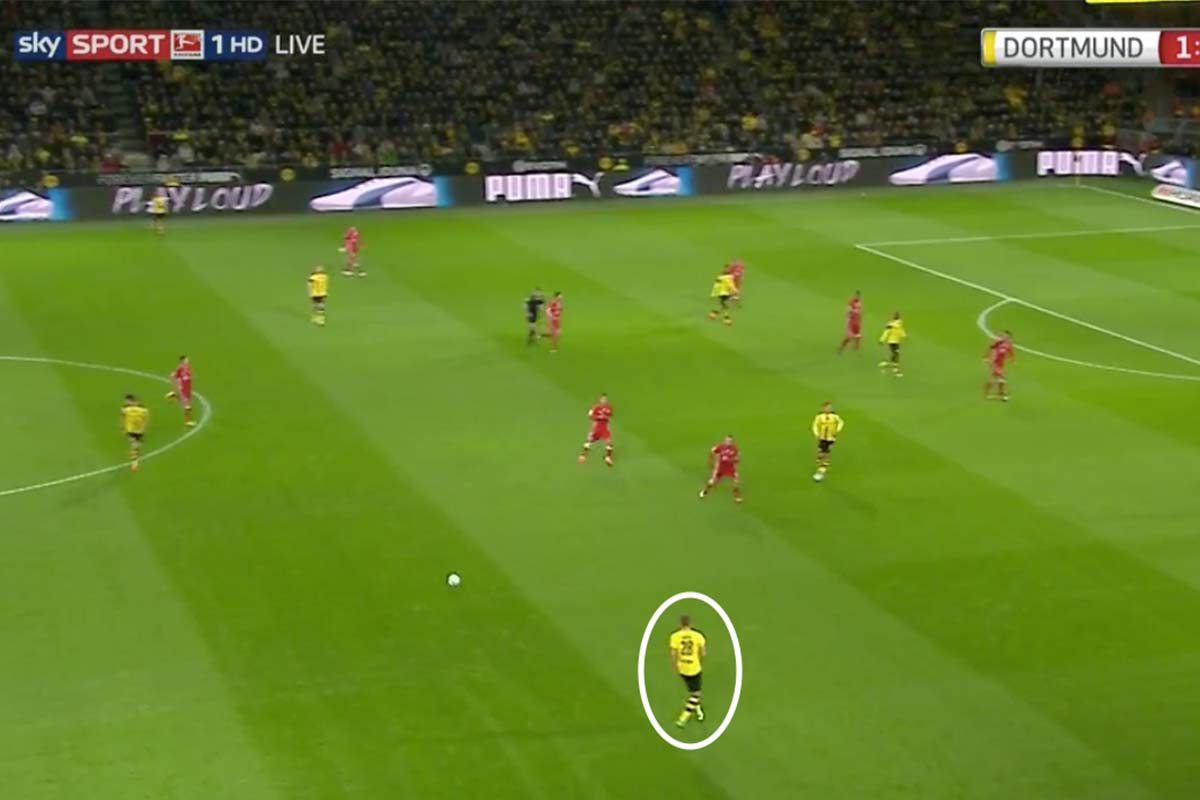 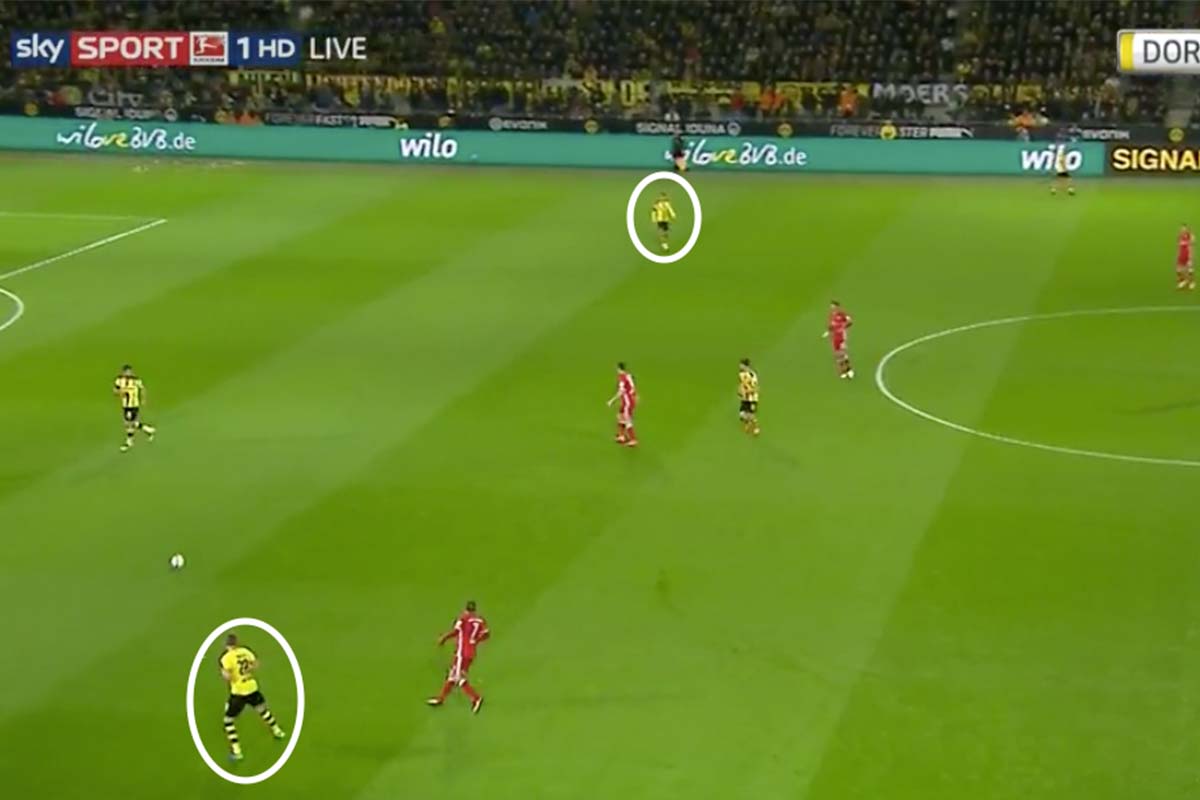 Tuchel’s use of his outside centre-backs is similar to how Antonio Conte uses his at Chelsea. Both managers have their outside centre-backs fill the full-back area, especially their right sided centre-backs. Tuchel makes the most of Matthias Ginter’s versatility and the fact he’s played at right-back in the past. As Piszczek pushes on it’s Ginter who takes up a position what you would usually associate with a right-back.

Tuchel tactically outclassed Carlo Ancelotti in Der Klassiker. It’s no easy feat and people should sit up and take notice. He was brave enough to not only change the system ahead of a big match but to use Andre Schurrle and Mario Gotze in centre-midfield. That takes balls.

Dortmund’s win didn’t just keep their title aspirations alive, it also gave the Bundesliga an unfamiliar look and blew the race for European football wide open. Dortmund, Hoffenheim, Koln, Hertha Berlin and Eintracht Frankfurt are all on 21 points and just the three points behind Bayern Munich. RB Leipzig are out in front on 27 points. European regulars Gladbach, Schalke and Bayer Leverkusen have a lot of ground to make up if they’re to finish in European places. But for a two team league, which many claim Bundesliga to be, it’s awfully tight this year.