Much has been made of Tottenham Hotspur‘s transfer activity this summer. Yet there hasn't actually been all that much of it.

Jack Clarke arrived from Leeds United but was promptly loaned back to the Championship side and 17-year-old forward Kion Etete joined from Notts County to beef up the youth team.

There was the club-record addition of Tanguy Ndombele from Lyon but the French midfielder remains the only first-team addition so far.

So it's hardly been a trolly dash through the well-stacked shopping aisles of European football. It might simply feel like such as Spurs went more than 500 days without a new signing prior to Ndombele's arrival.

There is still time for Spurs to have a big impact on this summer's transfer market, however. Five days remain until the window closes for English clubs; it's at this point Daniel Levy earns his corn.

Tottenham have been linked with two big-money additions. The first is a move for Giovani Lo Celso, the Real Betis midfielder the North London club have pursued throughout the summer.

Spurs have had several bids rejected by the LaLiga side who want a fee close to £65million for the 23-year-old.

The second may prove harder to achieve. According to reports, Tottenham have made a late approach for Sporting star Bruno Fernandes, thought to be on the cusp of a move to Manchester United.

Spurs can match the Portuguese side's £64million valuation and can offer the midfielder something United can't: Champions League football.

That could sway Fernandes. And if the 24-year-old were to make the move to North London alongside Lo Celso, Tottenham would possess one of the most talent-rich midfields in Europe.

In addition to Ndombele, Lo Celso and Fernandes the likes of Harry Winks, Moussa Sissoko, Eric Dier and Oliver Skipp would also be vying for a first-team spot.

There is also Christian Eriksen, who remains a Tottenham player despite his assertion he wanted to move elsewhere this summer.

So how could Pochettino set up his side? We've donned our best suit and made ourselves a cup of mate tea to try to get into the mind of the Argentina tactician. 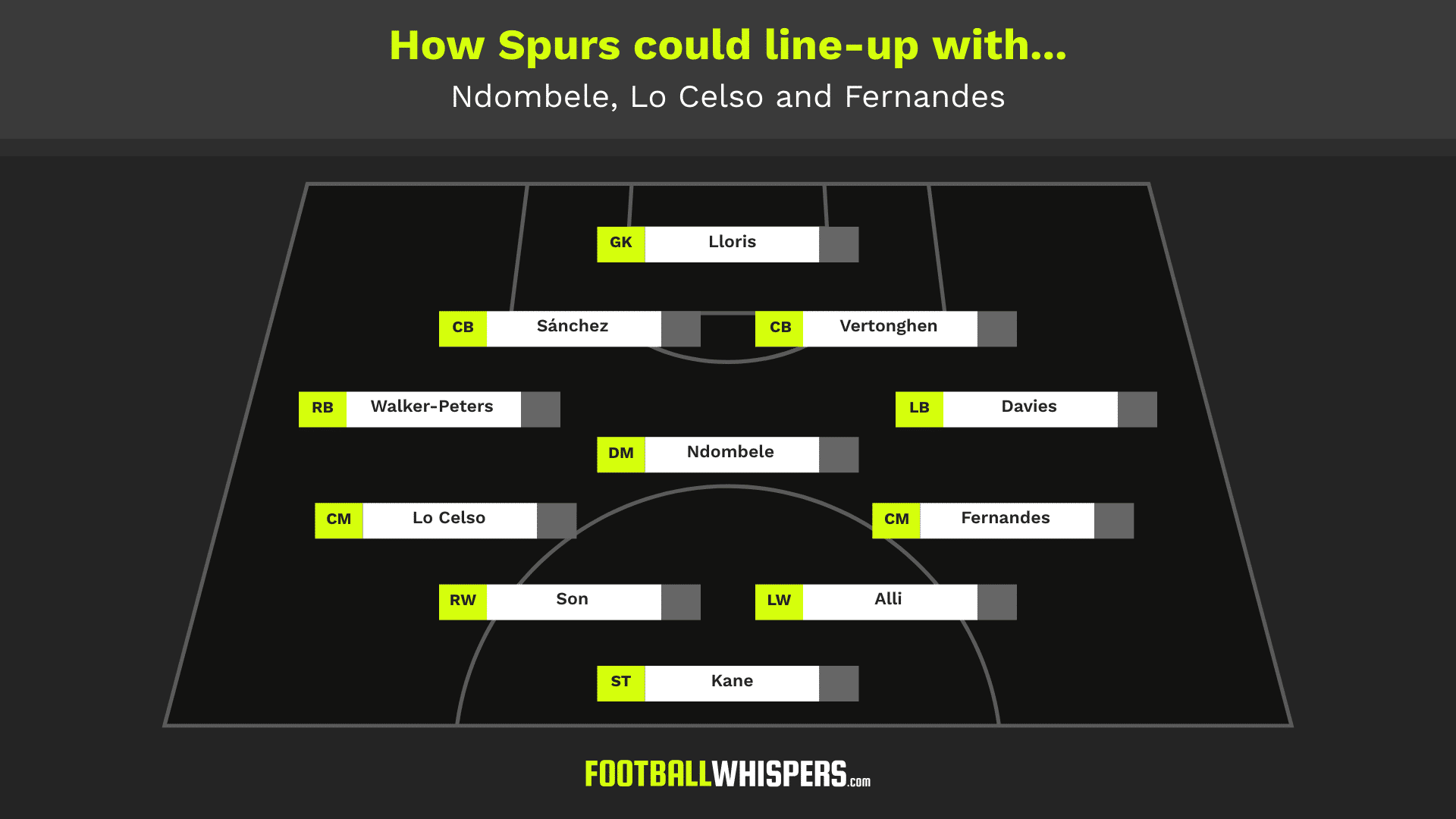 Pochettino is a coach willing to take risks. And going with a whole new midfield would certainly be one.

Ndombele is nailed-on for a starting berth this term. The France international is not only an effective destroyer but also an excellent playmaker – the true heir to Mousa Dembélé in the Tottenham midfield.

Could he screen the back four alone, perhaps against weaker sides. But against the Premier League's best – and in Europe – it's likely Ndombele would be partnered by either a ball protector (Winks) or another defensive-minded player (Dier).

Lo Celso would be given the same box-to-box role he thrived in at Betis last season. The Argentine linked defence and attack effortlessly under Quique Setién and established himself as a threat in the opposition penalty area, scoring 16 times in all competitions.

That output pales into insignificance compared to Fernandes, however. The former Sampdoria midfielder blossomed into one of Europe's finest finishers last term and struck 31 goals.

His repertoire included thunderous efforts from distance, neat penalty-box finishes, and brilliant free-kicks. The 24-year-old could be a similar threat for Tottenham and replace Eriksen's output should he depart.

Fernandes would also take some of the goalscoring pressure of Harry Kane, something which would aid the forward no end. 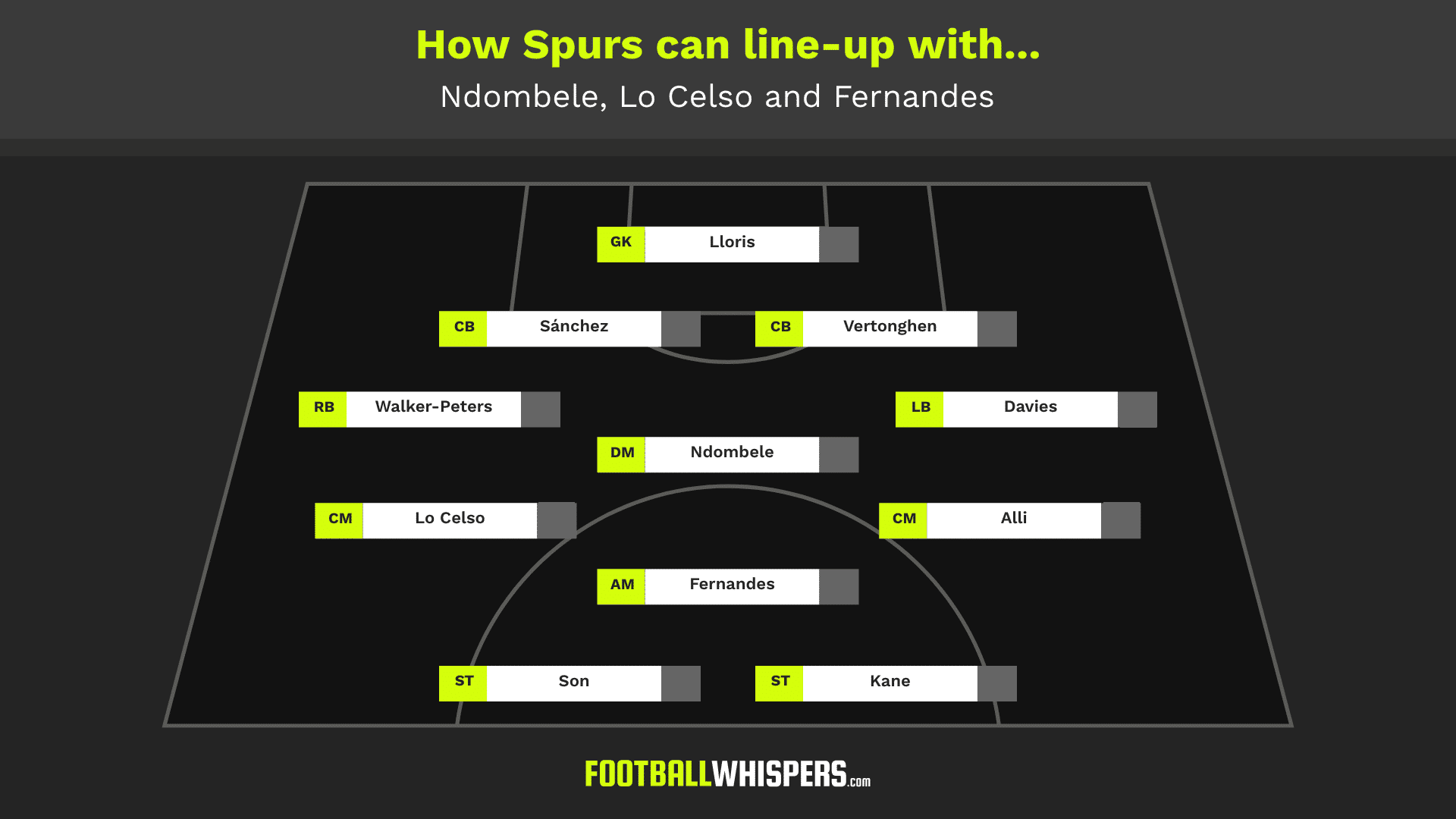 A variation on the above would allow Pochettino to implement a two-man attack, which is something he toyed with last season.

There wouldn't be a big difference in Ndombele's role nor Lo Celso's but Fernandes would be deployed as a No.10 rather than in the three-man midfield.

It would give the Portugal international freedom to roam, a position in which he can find space to create and threaten goal in equal measure. Alli would be more withdrawn and fill the left side of midfield, a role he played last term, while Heung-min Son would be pushed forward to partner Kane. 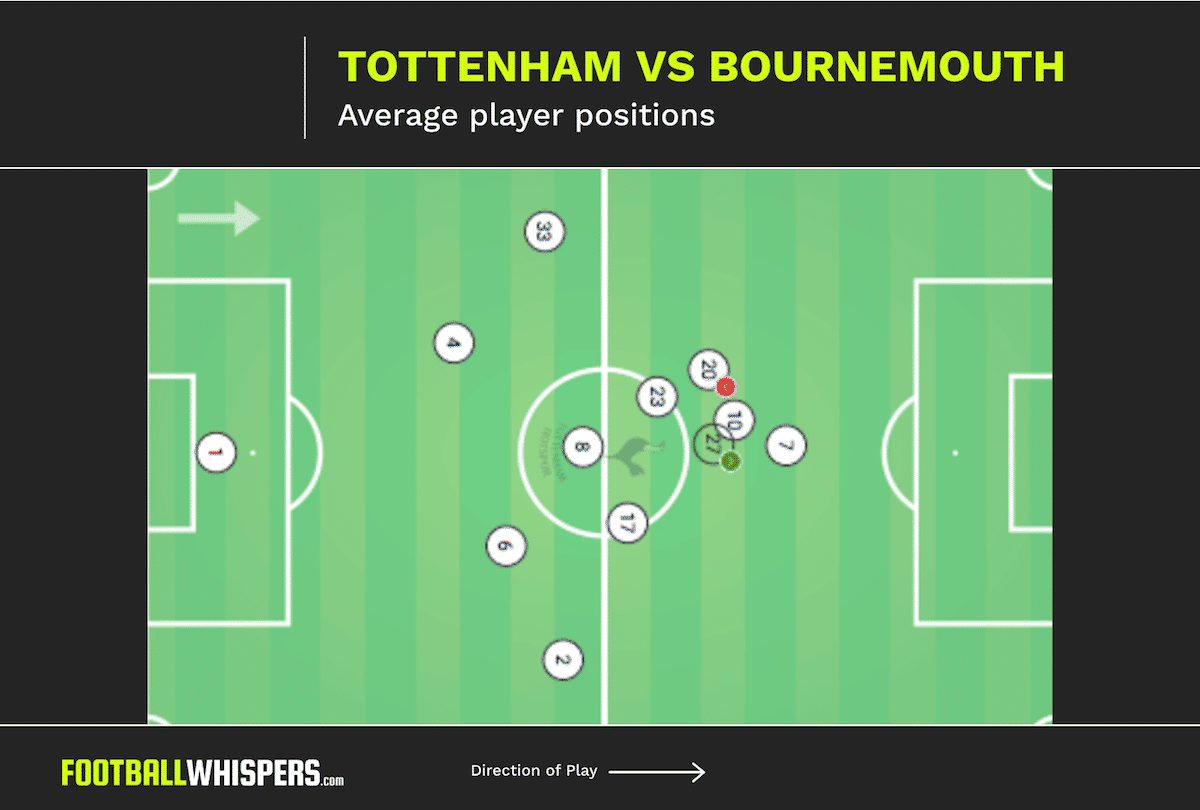 It went largely unnoticed but in several matches last season it was the Korean star who spearheaded the Tottenham attack.

As shown in the average position map above, England's captain (No.10) would drop keep to link possession and Son (the No.7) would be on the shoulder of the last defender, prepared to break in behind.

That enabled Tottenham to stretch opponents and, in turn, created room for Eriksen and Alli to fashion chances. Such a system could be repeated with the additions of Fernandes, Lo Celso and Ndombele, although it would mean Winks and Sissoko are again omitted from the starting XI. 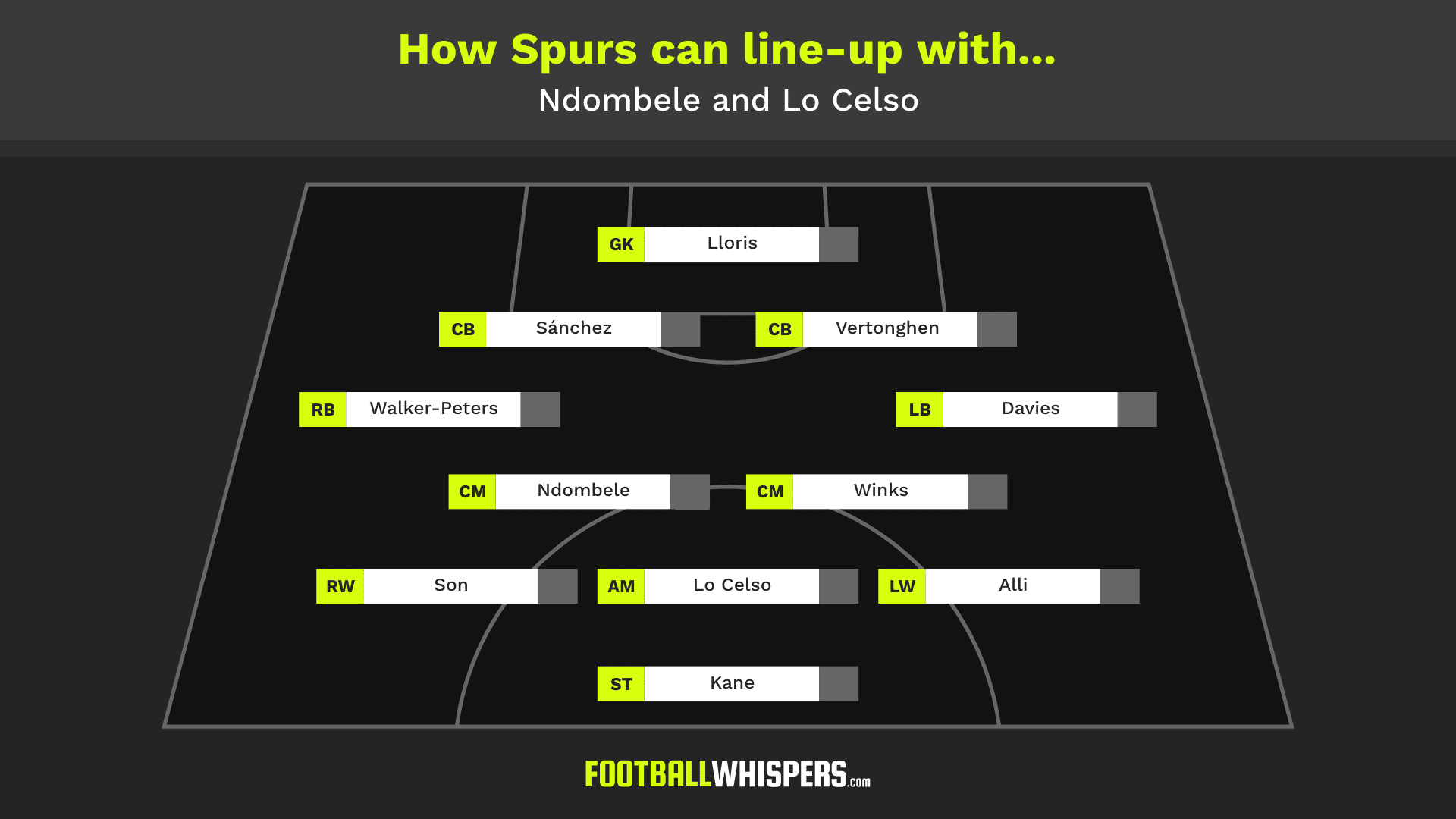 There is a very real possibility Tottenham do not land both Lo Celso and Fernandes. United's interest – and financial clout – may persuade the Portuguese to head to Old Trafford instead of North London.

That would give Spurs a clear run at Lo Celso and would potentially avoid a selection headache for Pochettino. With just the Argentine midfielder to incorporate into his starting XI, Tottenham's midfield looks far more balanced.

In a 4-2-3-1 shape, Lo Celso would likely fill the No.10 position behind Kane. It's a role he featured in for Betis last term and one in which he proved he was far more than the midfield pivot Paris Saint-Germain made him out to be.

With Son out wide on the right flank and Dele Alli playing as an inside forward on the left, Lo Celso would be able to drop deep to collect the ball and bring it upfield.

He averaged 2.43 dribbles per 90 in LaLiga last term – the 12th best figure among midfielders – and that ability would be invaluable to Spurs in breaking deep defensive blocks.

Ndombele, meanwhile, would be partnered by Winks. The two players have dovetailed well in pre-season and are both effective in possession.

With the duo at the base of midfield, Tottenham would be able to control possession against quality opposition but be a progressive, attack-minded side with the ball when up against weaker opponents.