The biggest challenge facing Tottenham Hotspur in the foreseeable future is keeping Mauricio Pochettino's brilliant squad together, and there is arguably no-one more important to the club than Toby Alderweireld.

The 28-year-old has reportedly rejected Spurs' offers of a new contract and his current deal until 2020 includes a £25million release clause that can be triggered from summer 2019.

So impressive has his form been since moving to Spurs, Alderweireld is reportedly a Chelsea transfer target.

Given the paucity of top centre-backs in Europe and the rapid inflation of the market since Alderweireld joined Spurs from Atlético Madrid in 2015, it would be a huge blow if he was allowed to leave for a fraction of his worth.

Alderweireld was a bit-part player in one season at Atlético but now he could play for any of the superpowers, and his performances last season compare favourably to the best centre-backs in the Europe.

Alderweireld's pass completion rate of 83 percent was slightly lower was lower than the other centre-backs compared but this does not tell the whole story. The average length of his passes, 25.77m, was the highest – for Hummels, it was just 18.37m – so it is no surprise that slightly fewer of them found their target. 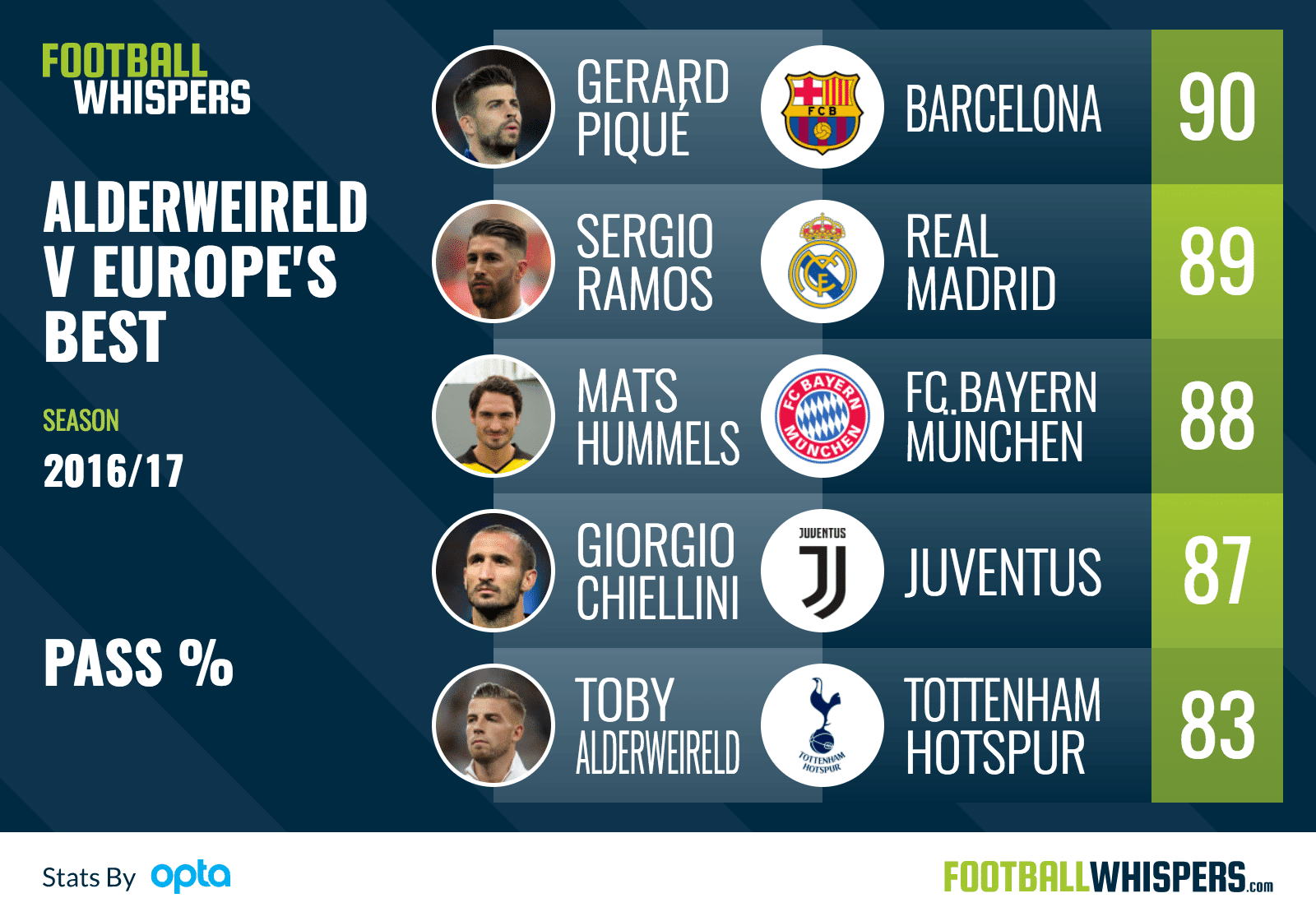 Luiz's passes were about a metre shorter than Alderweireld's on average and the Brazilian had the second lowest pass completion rate, 84 percent, suggesting that longer passes are more risky.

Alderweireld is often tasked with starting attacks for Spurs with pinpoint diagonal balls to the wide players or behind the opposition defence to Dele Alli and Harry Kane. 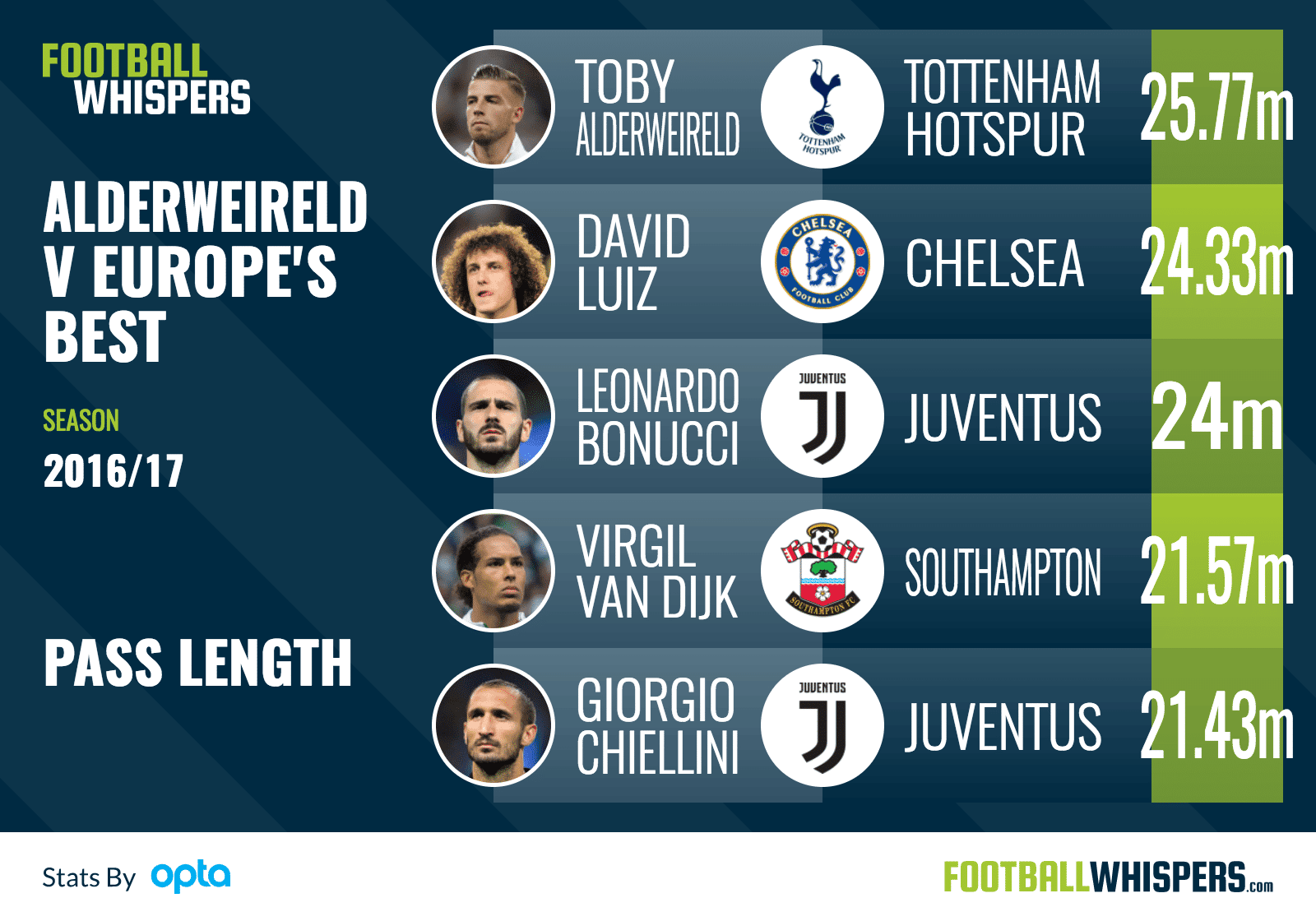 In this respect, he is much more of a playmaker than a centre-back like Piqué, who played far more backward passes in fewer games last season. Although Alderweireld did not record an assist in the league last term, he created 0.24 chances per match, which compares favourably with Piqué and Chiellini.

He is crucial to Spurs' ability to play out from the back – a key principle of Pochettino's philosophy – and it was no coincidence Alderweireld's absence from the team with a nerve injury to his leg coincided with the club's worst run over the course of the campaign, as they won twice in ten matches and desperately struggled to score from open play.

Defensively, Alderweireld's statistics are equally favourable to Europe's best. Last season, he completed an average of 1.07 tackles per game – fewer than Van Dijk, Piqué, Ramos and Chiellini – but, crucially, he lost the fewest tackles of any of the players compared, 30 in exactly 30 appearances. This suggests Alderweireld is as good as anyone at judging when to make a challenge. 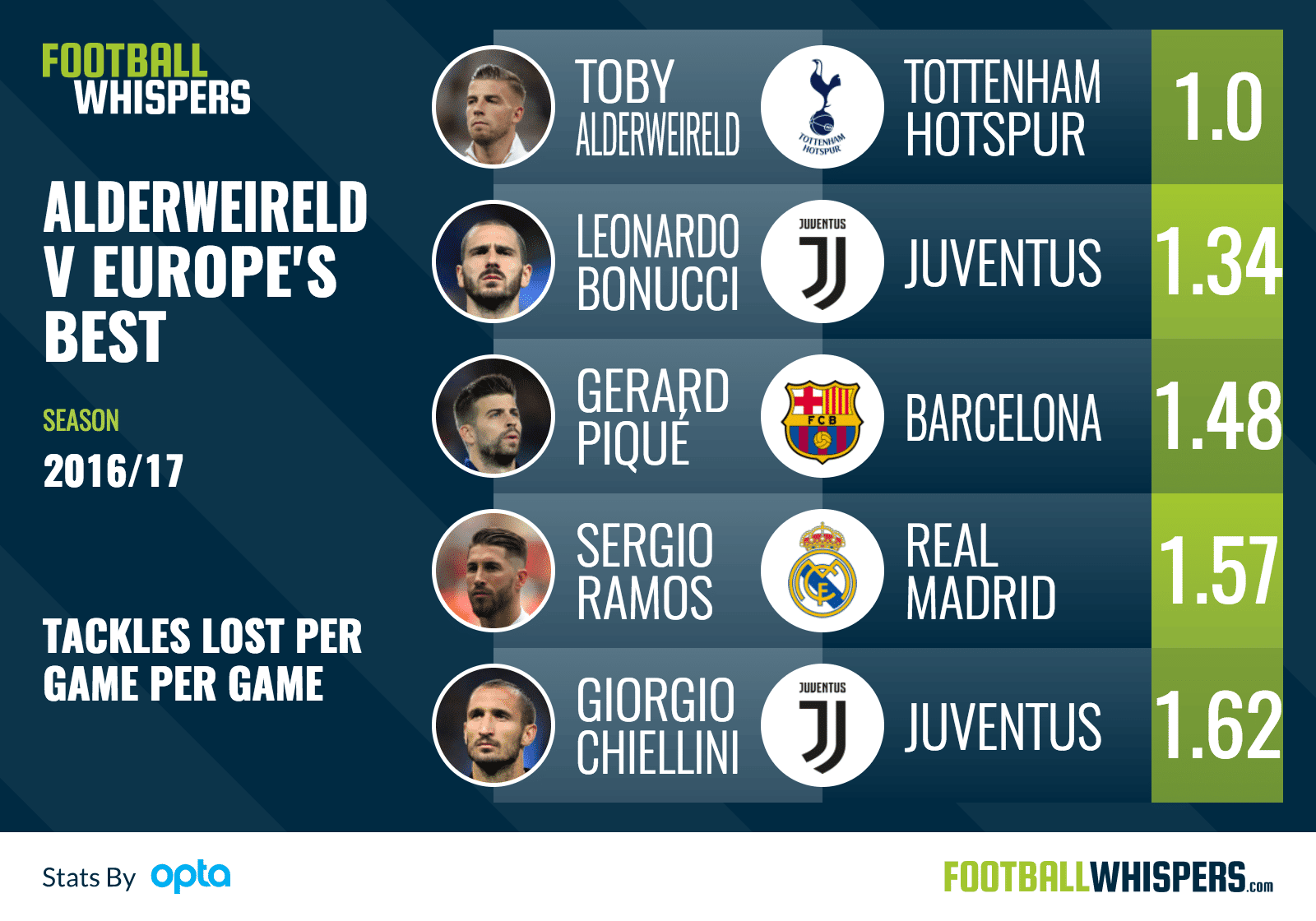 This is also reflected in the number of fouls committed per match, which is the one statistic above all others that sets Alderweireld apart from the continent's other top centre-backs.

He committed just nine fouls in 30 league matches last season or 0.30 per match. Premier League rival Luiz, by contrast, committed 29, while it was 34 for Ramos in La Liga and 29 for Bonucci in the Serie A – both in a similar number of games to Alderweireld. 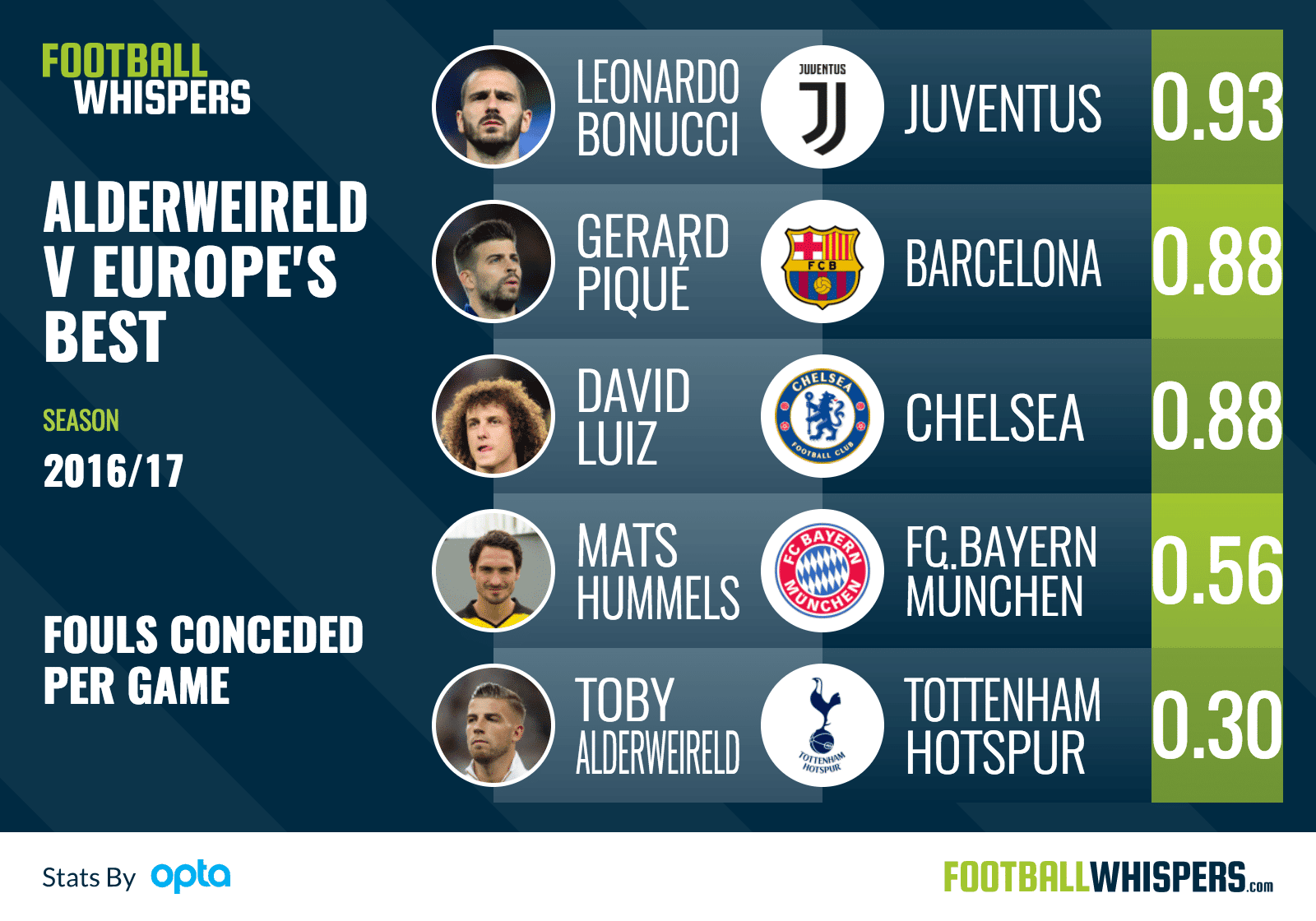 Another area where Alderweireld is top of the pack is in blocks. He completed 0.73 per match last season but he made the fewest interceptions with just 0.80 per 90 minutes.

These two statistics are key to understanding Alderweireld's specific and key role for Tottenham, and help to explain why the Belgian is indispensable. 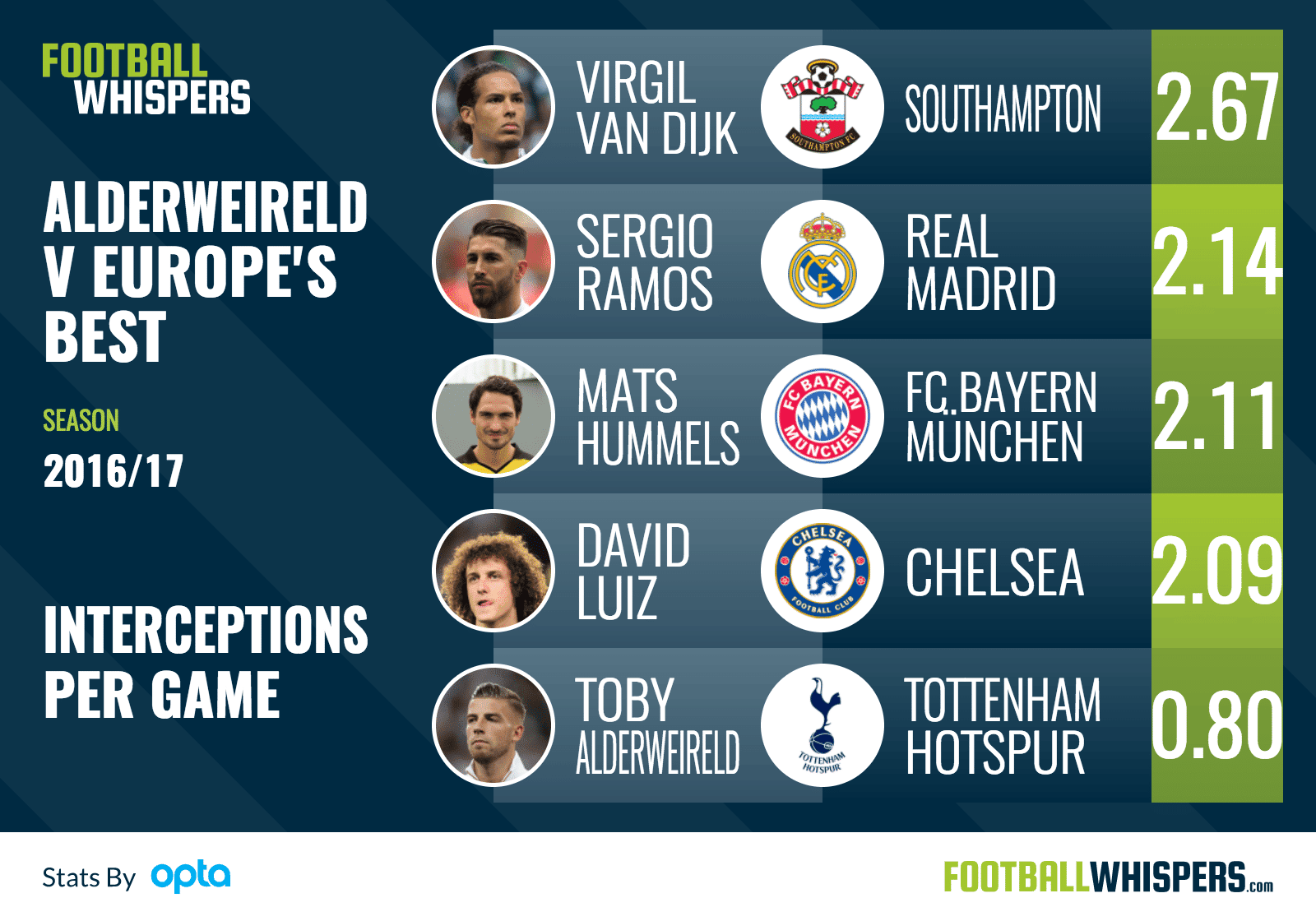 In Mauricio Pochettino's system – which is either a 3-4-2-1 or a fluid 4-2-3-1 with the defensive midfielder dropping into a back three in possession, allowing the full-backs to push forward – Alderweireld is the middle centre-back and always the deepest of the three.

While Jan Vertonghen and Eric Dier push forward aggressively into midfield or onto the wings to tackle and intercept, Alderweireld cleans up behind them like an old-school ‘sweeper'. Vertonghen, for example, has 1.48 interceptions per game, compared to Alderweireld's 0.80. 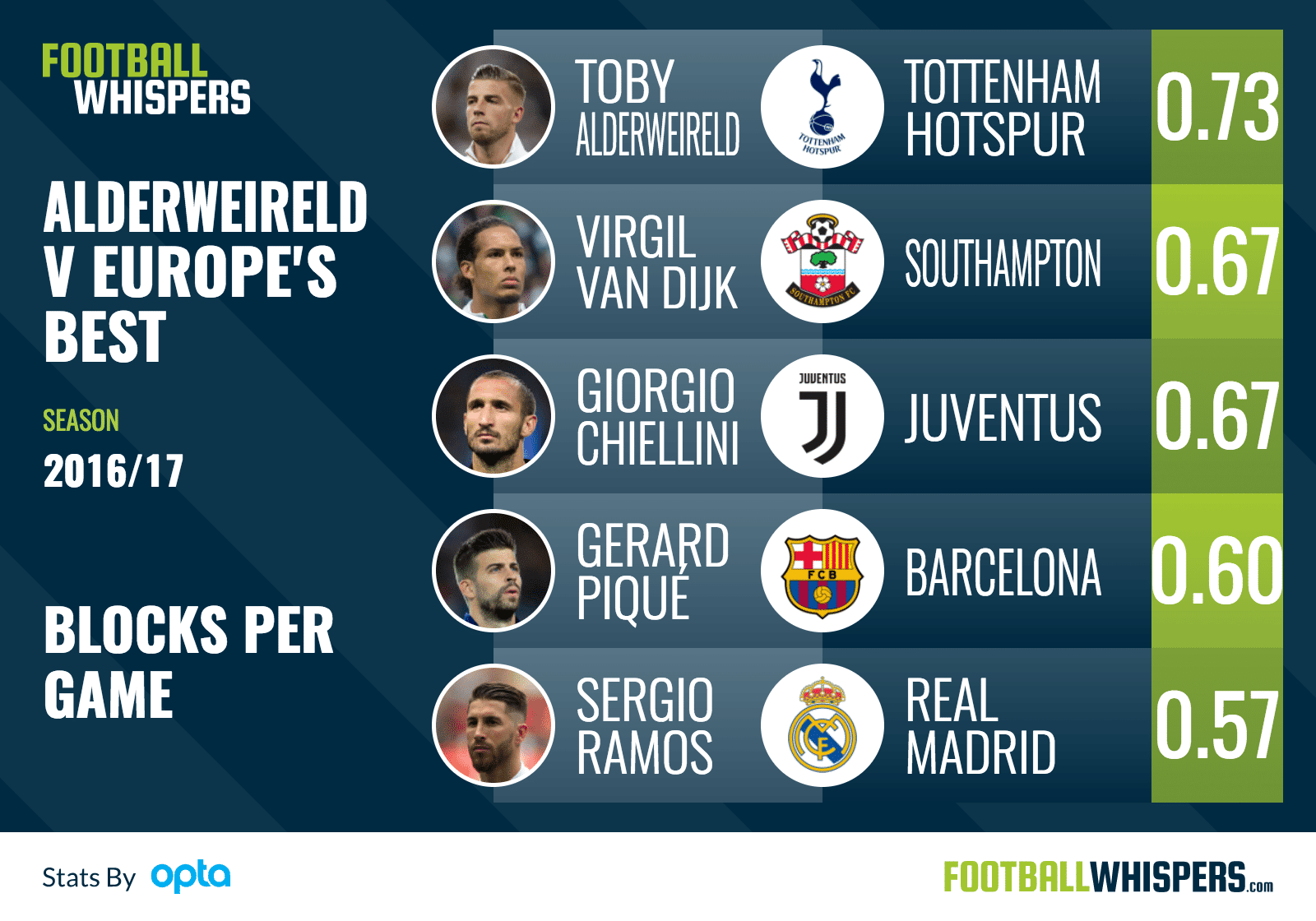 On the rare occasions the opposition are able to break away with the ball they will find themselves one-on-one with Alderweireld, but his greatest strength is his one-on-one defending, staying on his feet, between the ball and goal, never getting turned or drawn into an early tackle.

Alderweireld's position as the last man was also reflected in the number of clearances he made – second only to Van Dijk, who plays for the team that did the most defending last season.

Spurs have signed the highly impressive Davinson Sánchez to play in a back three alongside Alderweireld and Vertonghen, but the former Southampton loanee would be an extremely difficult player to replace while Pochettino remains in charge.

Like all good defenders, Alderweireld often goes relatively unnoticed but the statistics suggest that he is often the club's first line of attack as well as the last line of defence.