Following Euro 2016, João Mário was one of the most sought-after players in Europe. He had just played a key role as Portugal overcame the odds to win their first major international tournament and, having starred at club level for Sporting Lisbon, was a wanted man.

Of all the giants in the continent’s major leagues, Inter Milan were the team to win out. The Italian side paid £36million to secure the player’s signature, making him the second most expensive addition in the club’s history, behind only Christian Vieri.

Expectations were high, but so far the Portuguese has failed to deliver. His maiden campaign in Serie A saw him play frequently, though his impact was minimal. This term he has been unable to assert himself on the first team ahead of Borja Valero, Roberto Gagliardini and Matias Vecino, starting few games.

He started well, picking up four assists in six games, but has only managed once since, finding himself out of the starting XI and on the bench.

Mário’s decreasing stature in Milan has led to interest from abroad. Manchester United and Arenal were both beloved to be keen, but it now seems West Ham United are favourites to sign the midfielder, reportedly ready to take him on loan with a view to a permanent deal in the summer.

WHO IS JOÃO MÁRIO?

After spending time with his hometown club Porto, Mário joined Sporting Lisbon’s famous youth academy in 2004. Following in the illustrious footsteps of Cristiano Ronaldo, Luis Figo and Ricardo Quaresma, he made his way as an attack-minded midfielder with bags of skill.

He made his debut in 2011/12, coming off the substitutes’ bench for a Europa League group stage clash with Lazio, but it took him several years and a loan spell away before he established himself in the first team.

Between 2014 and 2016 he became a regular and an integral member of the side, attracting interest from top clubs around Europe. He also nailed down a place in Portugal’s senior squad – he now has 31 caps and one international goal to his name.

His spell with Inter started promisingly despite the managerial chaos surrounding him as Frank de Boer came and went, the Dutchman being replaced by Stefano Pioli. Mário made 30 league appearances in 2016/17 and showed glimpses of what he could do in various different midfield roles, but he has yet to build on that this season.

One of Mário’s most obvious strengths is his ability to function well in different midfield positions. This is something he demonstrated during Euro 2016 with Portugal, and he has continued to show it in Italy with Inter.

He appreciates being given the freedom of a more attack-minded role, thriving with the responsibility of going from box to box, however he can also sit deeper, play behind the strikers or, if absolutely necessary, shift out to either wing.

While this flexibility gives his team options, however, it has also hampered Mário. He has been unable to prove himself a specialist in any one area, instead being fitted in wherever there is a positional vacancy. For all his talent, there is a danger that he lacks one defining asset.

His technical ability is unquestionable. He glides across pitches, rarely losing control, and is able to pick out a team-mate over most distances. He is also a sound dribbler with a capacity for taking on and beating his man, and is able to link well with his team-mates in tight spaces.

This may be one negative consequence of his aforementioned versatility, as he has been unable to get settled in any one role over time.

If given the chance to play regularly in a central role within a functional side, the 24-year-old could potentially shine. With his ball control and passing proficiency, he could add real value to most teams who look to control possession.

Unsurprisingly, given his reduced playing time, Mário’s statistics have gone down this season. Compared to last term, he makes 0.3 fewer key passes and completes 0.6 fewer dribbles per game, while he also passes, tackles and intercepts far less. 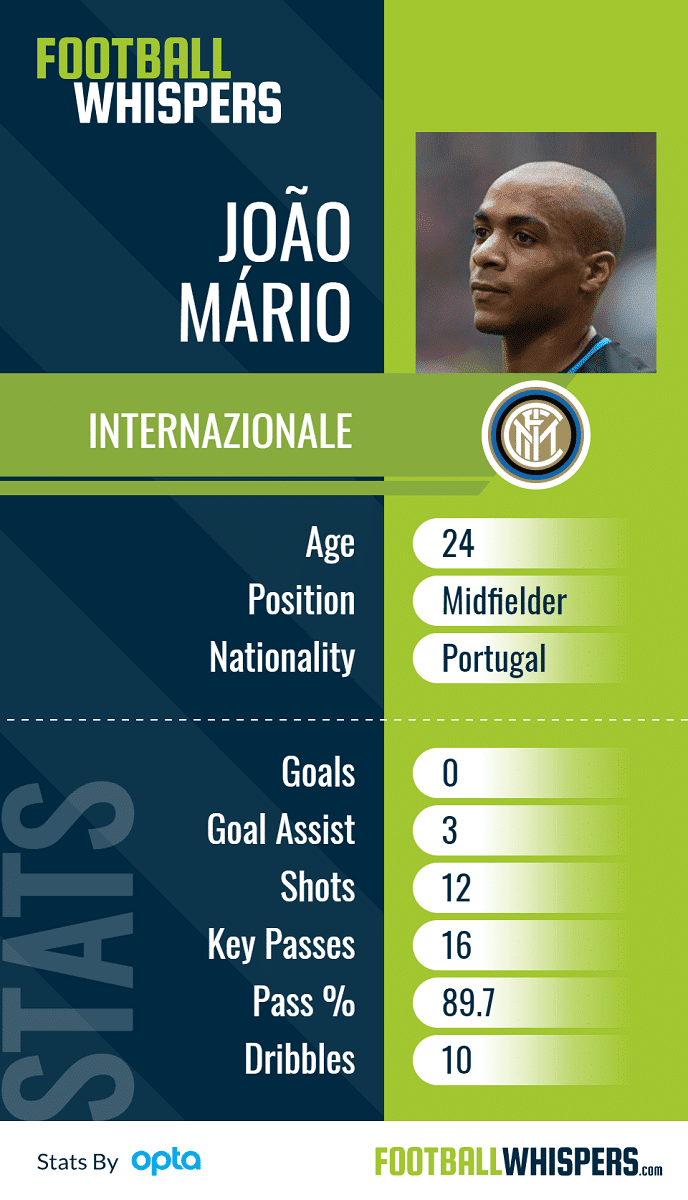 While he is under contract to Inter until 2021, Mário’s value can only have gone down over the last six months. Essentially overtaken in the pecking order by a 32-year-old Valero, he no longer commands the same status he acquired in 2016.

However, the minute a Premier League club shows interest in a player their valuation shoots up. Given Manchester United, Arsenal and West Ham have been linked, expect Mário’s to do just that. And, while the Italian side may be open to offers, he remains an important member of their squad, if not their first team.

With a potential transfer fee of around £40million, those interested should make sure the player will add value to their team; despite his dip in form, Mário has the technical quality to transform the Hammers midfield.

Mário could suit both teams and, given his diminished reputation and relatively modest – by modern Premier League standards, at least – transfer fee, he could prove to be a positive addition.