In years gone by the Old Firm were able to buy ready-made stars. John Hartson and Chris Sutton at Celtic. Or Tore Andre Flo and Paul Gascoigne at Rangers. But in Scott Sinclair, the Hoops have created one of their own.

Gone are the days when either club could lavish millions of pound on big names – or, for that matter, attract them to the Scottish top flight for the final years of their careers.

When Brendan Rodgers signed Sinclair from Aston Villa for a reported £3million last summer few would have batted an eyelid. Sinclair was coming off an miserable season at one of the worst Premier League sides of all time and Rodgers was merely signing a player he had worked with at Swansea City.

Yet the move has rejuvenated an ailing career and fired Celtic to a sixth consecutive domestic title.

Much was expected of Sinclair. The Bath-born wideman joined local club Bristol Rovers as a nine year old and made his debut at 15 years and 277 days, becoming the youngest player in the club's history. That was 2004.

Ahead of the 2005/06 season Sinclair joined Premier League giants Chelsea. Loan spells with Plymouth Argyle and Queens Park Rangers only raised the bar. This kid was the real deal.

But, like so many before and since, opportunities for Sinclair at Stamford Bridge were few and far between. The winger left for good in 2010 with 14 appearances and one goal to his name.

It was Rodgers, his former youth team coach at Chelsea, who persuaded him to leave the West Londoners and re-join him at Swansea City for £500,000. It proved an inspired signing.

Together they won promotion to the Premier League for the first time in the club's history with Sinclair bagging an impressive 27 goals including, crucially, three in the play-off final win over Reading at Wembley.

Sinclair followed that up in the top flight, scoring eight goals as the Swans finished a respectable 11th place. It was enough to get the attention of Manchester City who splashed £6million to sign the then 23-year-old.

Having left Chelsea in order to spread his wings, Sinclair's move to City was always going to be a risk. It quickly became apparent that he had been signed without the blessing of Roberto Mancini and was simply filling the gap left by another homegrown winger, Adam Johnson, who had grown sick at his own lack of opportunities.

In his first season at the Etihad Stadium Sinclair made just two Premier League starts and 11 league appearances in total. The following season was even less productive before he joined West Bromwich Albion on loan.

But he failed to rediscover his form at the Hawthorns and returned to City for a frustrating season which comprised two substitute outings, switching to Aston Villa for the second half of the 2014/15 campaign.

Sinclair showed promise on loan, scoring once in five starts, and the deal was made permanent in the summer of 2015. Sinclair played regularly but nobody could stop the Villans' calamitous slide into the Championship.

When Rodgers came calling for Sinclair in 2016 he threw his former talisman a lifeline. In four seasons prior to joining the Bhoys Sinclair had made 30 league starts, scoring three goals and failed to supply a single assist. He was not likely to be in high demand and certainly not from clubs with aspirations of anything other than staying up. 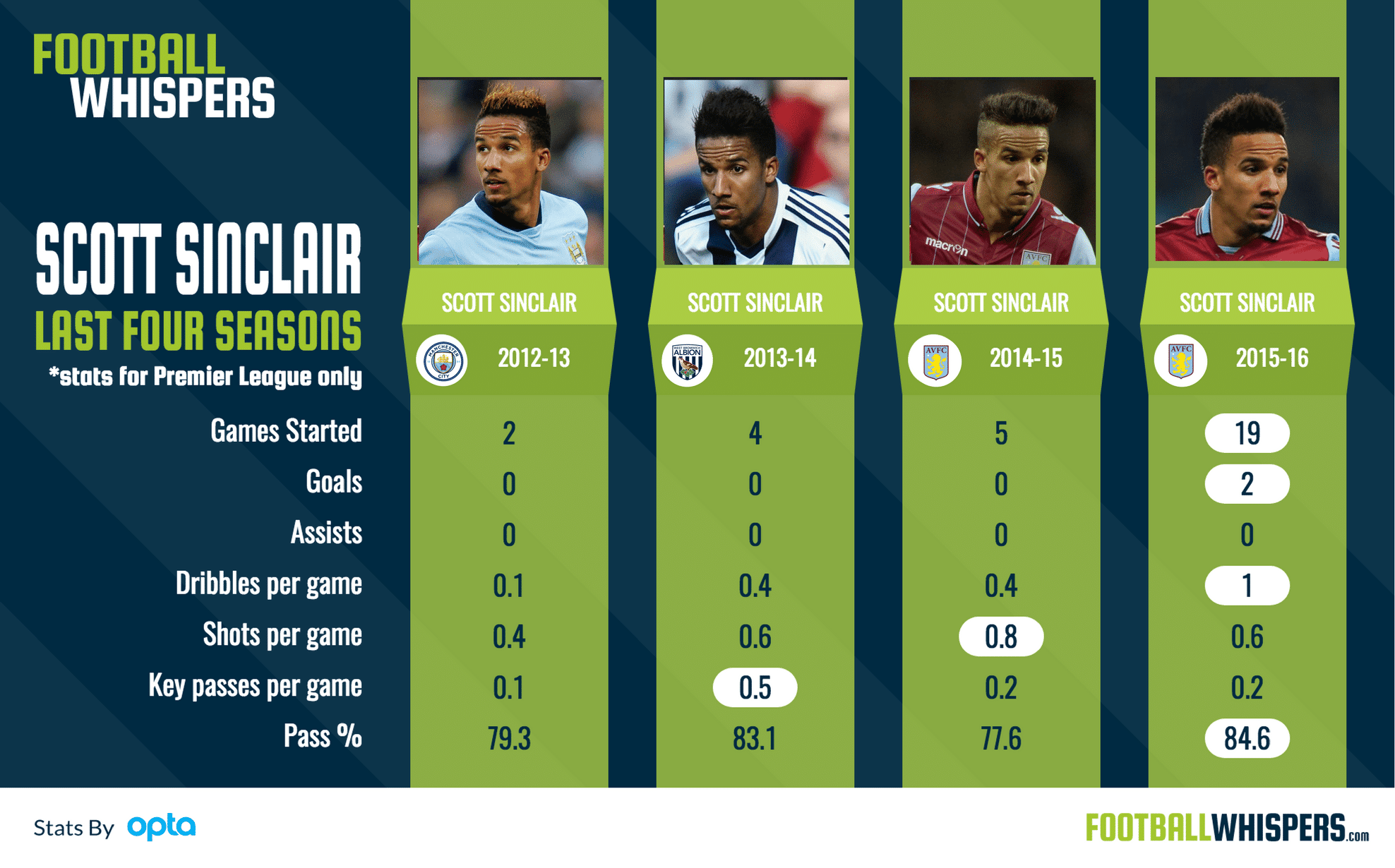 READ MORE: 3 CENTRE-BACKS FOR CELTIC TO TARGET THIS SUMMER

However, he has been an entirely different player at Parkhead. Introduced from the bench on the opening day of the season Sinclair gave an indication of what he would bring by bagging a late winner against Hearts.

He followed that up by becoming the first player since Jimmy McGrory in 1922 to score in his first five Scottish Premiership games for the club – a run which culminated in the 5-1 demolition of Rangers in the first Old Firm meeting of the season.

Reasons for the revival

Speaking to the club website after scooping the two awards, Sinclair said: “This is the best time and the happiest time in my career right now. To have the connection with the fans and all of them who voted for me, it just means so much to me.”

And it is little wonder Sinclair is enjoying his time in Glasgow so much. Along with Dembêlé he is the main man and his form will surely be causing clubs outside of Scotland to rethink their views on him.

But why would he leave? Playing for Celtic guarantees success, silverware and Champions League football. And all while playing for a manager who knows how to get the best out of him.

It is no coincidence that Sinclair has thrived for a second time under Rodgers. By far the best season of his career came while working with the Ulsterman at Swansea and he picked up where he left off since joining Celtic. 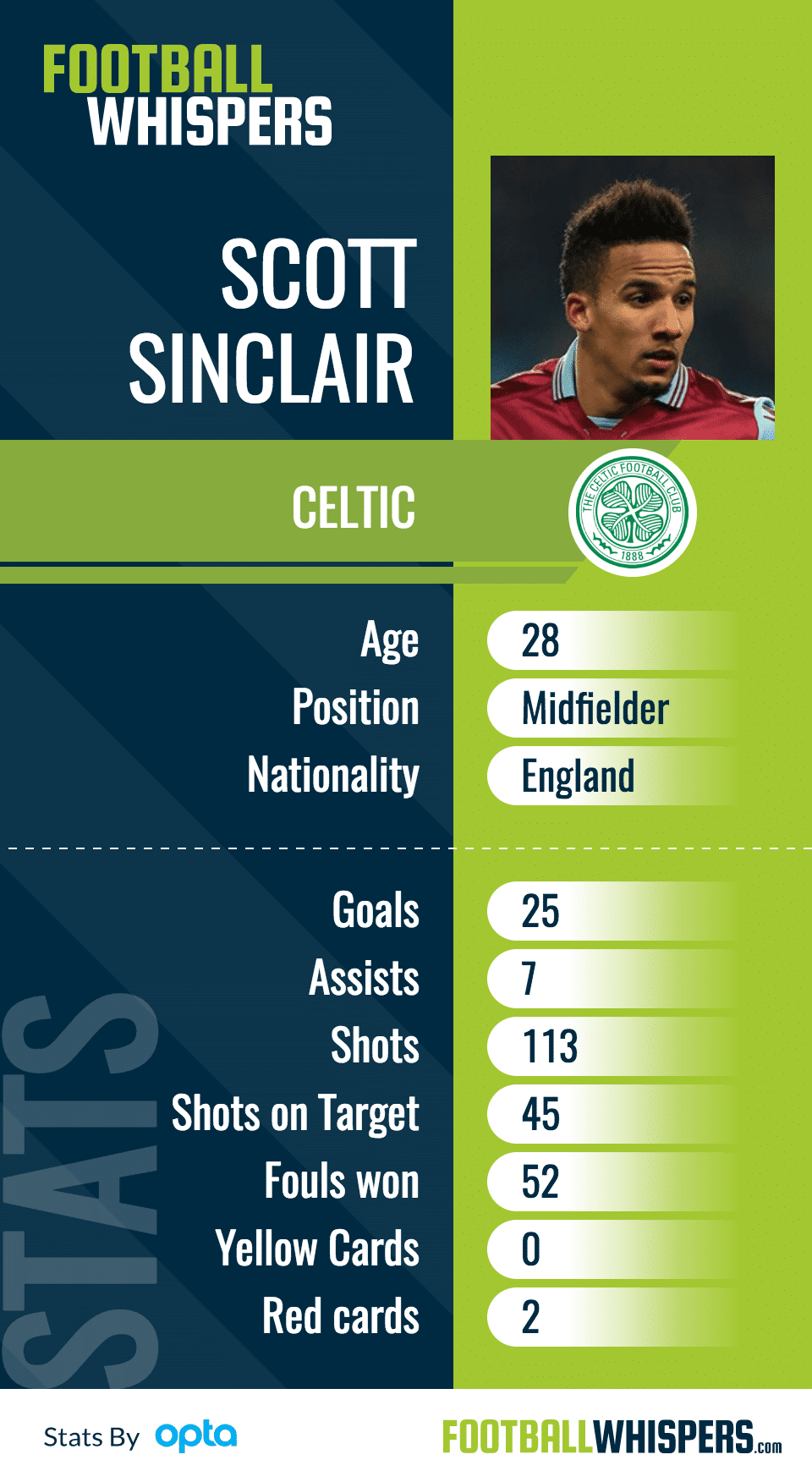 Part of the secret is Rodgers' man management. The former Liverpool boss is widely credited for getting the best out of his players and he will know the buttons to push with Sinclair in order to illicit the performances he has churned out this term.

On a tactical level, Sinclair has played to the left of Dembélé as a wide forward. In previous seasons he has been utilised as a more traditional winger, starting from further back and having to advance through players before getting into areas where he can do damage. 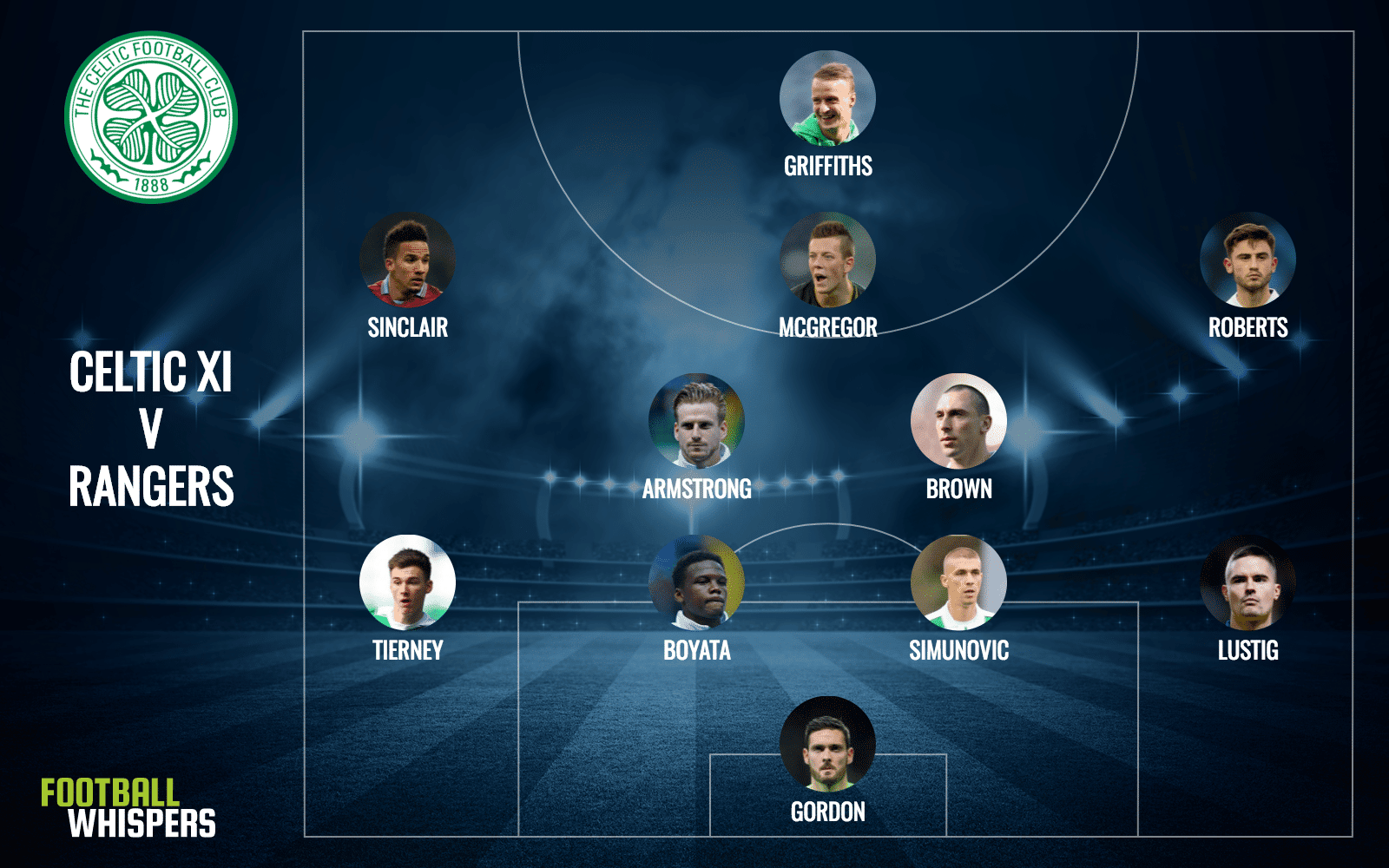 This season, though, he has been on the end of moves or driving into space before providing the finish or killer pass for his team-mates.

For example, against St Mirren, Celtic break with Sinclair driving forward and curling into the top corner by opening up his body and using the defender as a shield. 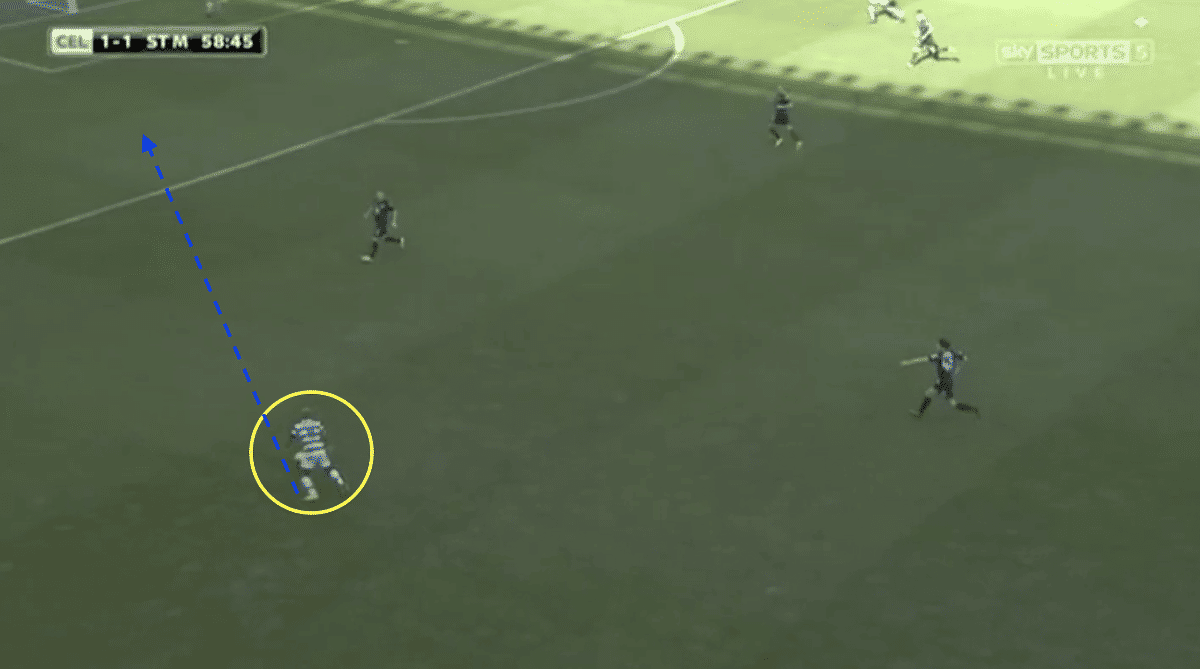 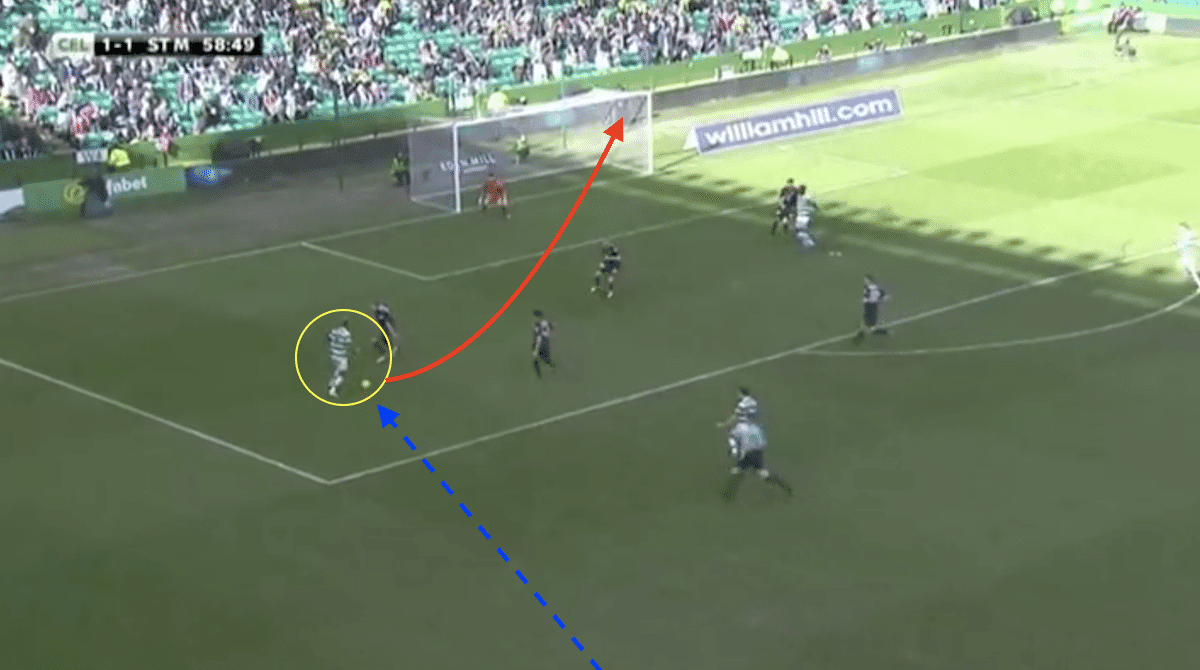 The big question now is what happens next for Sinclair. Dembélé will be highly sought after this summer – even with Celtic reportedly slapping a £40million asking price on his head. But if Celtic can hold onto their two star men there is no reason why they can't continue their domestic dominance and make a good fist of progressing further in the Champions League.

At 28 he is in the prime of his career and dominating a league where his side are the best by some distance. He owes much of that success to Rodgers and, having left his tutelage before and come up short, he would be foolish to repeat that error.

The elephant in the room is that the Scottish Premiership is considerably weaker than the Premier League. Whether there will be interest in Sinclair remains to be seen. But given his lot in Scotland it would be a hard sell to persuade him to join a side battling the drop in England's top flight.