Every season, debate rages over which new recruit is the campaign's best signing, with some arguing value for money should be the primary criteria, while others emphasise sheer achievement above all else.

This year, though, such discussions have been rendered redundant: whichever way you slice it, Mohamed Salah is the signing of 2017/18.

Brought in from Roma for £37million, the Egyptian winger's arrival at Liverpool was not met with unanimous acclaim, owing largely to a washout spell with Chelsea earlier in his career, despite three stunning seasons in Serie A.

But even among those who knew Salah would thrive in his second go-around in the Premier League, no one could have predicted just how devastatingly effective the 25-year-old would be.

After his 21st appearance for the Reds in the Premier League, against Leicester City on December 30, Salah had scored 17 goals and registered five assists. Only two-time Golden Boot winner Harry Kane sits above the ex-Fiorentina loanee in the scoring charts.

A potent goal threat throughout his career, Salah's mid-season Liverpool return is already his best-ever tally, eclipsing the 15 league goals he bagged for Roma last term.

What makes the former Basel man's prolific streak all the more impressive is that he's not an out-and-out striker, making the majority of his appearances on the right wing and only recently taking up a more central role.

Anfield has been home to some of the greatest strikers the game has ever seen down the years, with the likes of Kevin Keegan, Kenny Dalglish, Ian Rush, Robbie Fowler and Michael Owen all outstanding scorers during their time on the red half of Merseyside.

More recently, Fernando Torres and Luis Suárez have earned the adulation of the Kop with their final-third exploits for Liverpool, each impressing immensely before eventually being sold for eye-watering fees.

Although they fit the mould of a conventional striker much more snugly than Salah, with their searing pace, individual skill and unerring finishing technique, Torres and Suárez are perhaps better analogs for the new star of Anfield than any of the aforementioned names from the more distant past. As such, they are better benchmarks for his achievements, and juxtaposing the three men's statistics throws up some interesting findings.

Isolating their stats from their most productive seasons with Liverpool, Salah is producing comparable numbers to Suárez and Torres.

Torres joined the Reds from Atlético Madrid in the summer of 2007 and instantly hit the ground running in England. The Spain international enjoyed the best period of his career at Anfield, scoring 81 goals in 142 games before joining Chelsea for £50million in January 2011. His most prolific season with Liverpool came in his first campaign with the club, 2007/08, returning 24 Premier League goals in 33 outings.

Suárez, signed to replace the outgoing Spaniard in the same mid-season window, was a little more of a slow burner, but arguably went on to hit greater heights than Torres, scoring 31 goals in 33 games during the 2013/14 campaign, bringing Liverpool within a whisker of a first league title in almost quarter of a century. 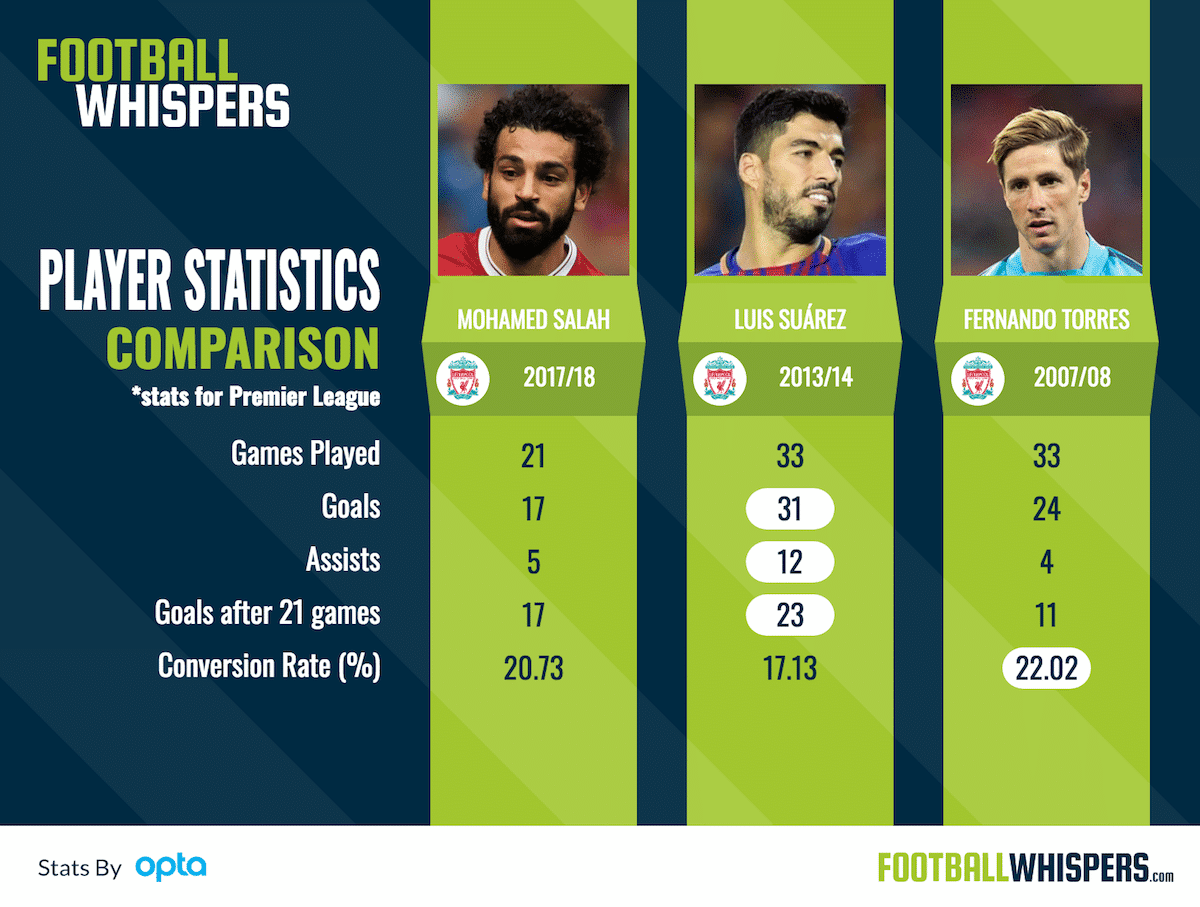 As the above graphic shows, Salah is pretty much keeping pace with the two Anfield icons during their peak. Suárez had raced to a frankly ridiculous goals haul by the 21-game point of his magical season, but the Egyptian comfortably outscored Torres at the same juncture.

Upon his arrival in England in the summer, Salah came with a reputation for being somewhat of an inconsistent finisher, known for scoring spectacular strikes while often missing more presentable chances.

Currently averaging 0.8 goals per game, if Salah is able to make 35 Premier League appearances for the Reds this term, he will finish the season with 28 goals to his name, leaving him trailing Suárez's return from four years ago but eclipsing Torres' standout campaign. If Salah manages to play in all of Liverpool's remaining league games, his current strike rate will see him hit the 30-goal mark.

Although he is unlikely to quite hit the heights reached by Suárez at his peak just yet, Salah has already exceeded the Uruguayan's return from his first full season at Anfield, in which the former Ajax man scored 11 times in 31 league games.

The thing about Salah, too, is that he seems to be improving at a rapid rate. As he grows more accustomed to Jürgen Klopp's system over the coming months, and as he grows yet more in sync with his attacking cohorts, it's frightening to think of how good and how prolific the No.11 can yet become.

With time, Salah is sure to etch his name into Liverpool's rich history of striking superstars.