When comparing any team to Barcelona, some exaggeration of the truth is required. No other team has Lionel Messi, Andres Iniesta or Sergio Busquets, and furthermore no other team can mimic the historic and cultural values of a club with such an ingrained footballing philosophy. Therefore, for a side competing in the EFL Championship to be mentioned in the same sentence as the Catalan giants, it is important to take the comparison with a pinch of salt.

Martin Allen, current Eastleigh boss and former manager of Leicester City, Milton Keynes Dons and Brentford, among others, made the leap when discussing Reading in November of last year.

“I’ve been down to see them play a few times and they are the closest I’ve seen to a Barcelona or Manchester City type team,” he said.

“They keep possession right from the back with the goalkeeper, pass it around and wait for openings — they’ve been very brave with how they’ve asked them to play. There’s been a complete transition from the football that we’ve seen at the Madejski Stadium before. So they’ve been brave and they are getting results. The players look very confident and they have got some very, very good players.”

It’s a bold statement, but not one without merit. For, while saying Reading play like Barcelona is slightly misleading, the Royals’ current playing style is as close to Barcelona as it is possible to witness in the Championship. And, in a league hailed for its unpredictability and championed for its breathless, high tempo football, any successful attempt to implement a more controlled style is worthy of praise, as well as further investigation. 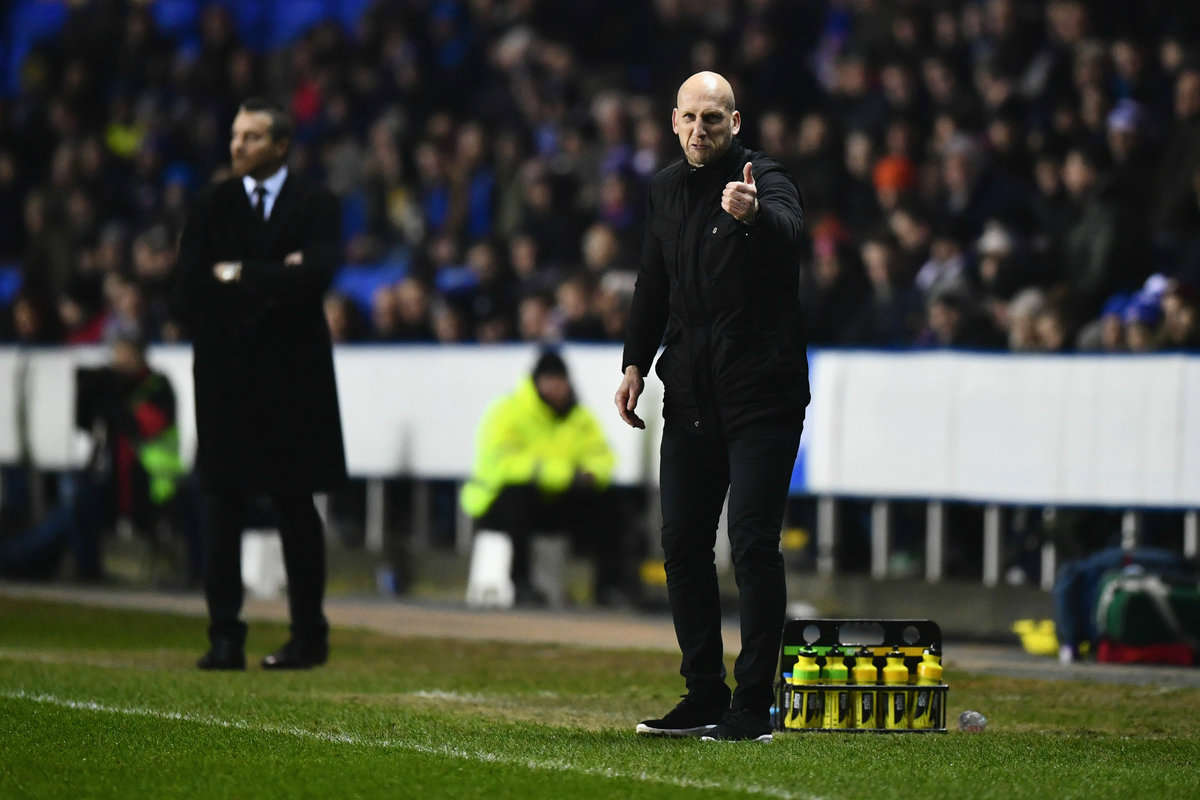 Jaap Stam never played for Barcelona, but he is Dutch. And, when it comes to national influence on a particular club, the Netherlands has had a real impact on the Catalan club’s past.

Rinus Michels, one of the primary proponents of Total Football, had two managerial spells at Barcelona, before Johan Cruyff brought about the ‘Dream Team’ of the early 1990s that conquered all before them. Louis van Gaal then had two spells in charge in the late ‘90s and early 2000s, before Frank Rijkaard rejuvenated the club between 2003 and 2007.

Growing up in his home country in the 1970s, Stam saw the effects of Dutch football and its transference to Barcelona, as well as other clubs around the world, and couldn’t help but absorb similar leanings.

As a player, Stam was a dominant brute of a centre-back, a physical force not to be trifled with who intimidated, tackled and blocked all who came near him. He thrived in the Premier League with Manchester United and represented the Netherlands at multiple international tournaments but, as Dutch players of his generation go, he was the least typical of his country’s style. Thus it is a slight surprise to see the way Reading have played since he was appointed as manager on 13 June 2016.

In 2014-15 and 2015-16, the Royals had slipped from serial promotion contenders to lower mid-table fodder in the Championship, finishing 19th and 17th. Several respected domestic managers such as Nigel Adkins, Steve Clarke and Brian McDermott, took their turn in trying to return the club to the league’s upper echelons only to fail, leading Reading to opt for a continental approach last summer.

Stam may have been brought in with results in mind, but his vision of how the game should be played has been at the forefront of his Reading career thus far. In his first full managerial post after years spent as a coach and assistant at Ajax, the Dutchman was clear about his intentions from the get-go. Speaking to Ian Holloway in September, he laid out his plan for the team.

“[For] the last couple of seasons they’ve played 4-4-2 with a flat midfield, or in a diamond sometimes. When I came over here I said straight away that I want to start from the system of 4-3-3,” Stam said.

“Of course being a Dutch former player [and] growing up in Holland I’m very familiar with that system. I wanted to … play attractive football, attacking football and from day one we’ve been working on that.”

And, when discussing his primary tactical ambitions, Stam stated that: “The main thing is [to] play attractive football, play high up the pitch, from a lot of possession creating chances and scoring goals.”

Attractive football means different things to different people, but to Stam it means something close to what he saw and experienced growing up while playing in the Netherlands. Primarily, it means controlling the game through effective control of the ball. This is evident in the statistics.

Of the Championship’s top 10 players in terms of average passes per game, three are Reading players — centre-backs Liam Moore and Paul McShane, and midfielder Joey van den Berg. And, as a team, no other side has averaged more ball possession than Reading’s 58.4 per cent. In addition, only Fulham and Huddersfield have completed more short passes per game than Reading’s 426.

Despite Stam’s prioritisation of aesthetics, results have also been good. Currently they sit third in the Championship table with 56 points and the league’s sixth-highest goals scored tally. They are on course for the play-offs with automatic promotion not beyond the realms of possibility, and they are entertaining their fans along the way.

The Barcelona comparisons have come about not just because of their ability to retain possession, however. Reading do circulate the ball patiently and look to build from the back, with the goalkeeper’s first pass almost always to one of the defenders.

Retention of the ball is paramount, but they also employ plenty of off-the-ball movement, possess a highly fluid shape that changes not only from game to game but during games as well, and like to keep their attackers high and wide up the pitch to create space for their deeper players to play penetrative passes. All of this is depicted in the graphics below.

On 13 December, Reading suffered a setback, losing 2-0 away to fellow playoff hopefuls Leeds. Their style was effectively nullified by sound defence, but Stam showed no willingness to change in the aftermath. Instead, he attacked the opposition’s methods.

To some, Stam’s words were preachy, a sign of a manager unable to accept the failings of his own ideas. However, they were also revealing of a manager with absolute clarity and an uncompromising belief in how his team should play. Stam’s way may not always win, but his idealism is refreshing.