Pedro Caixinha has been at Rangers since March but it’s only now that he is starting to put his stamp on the Ibrox club.

He was asked to make do with what he had last season. What he had was an ill-equipped, badly balanced squad put together by his predecessor Mark Warburton. It was little surprise results varied so wildly.

Now, however, Caixinha is overhauling his squad, signing eight players this summer. There’s a rebuilding job to be done at Rangers and the former Santos Laguna and Nacional coach is wasting no time in getting to work with no sign that the business conducted will stop there. Jamie Walker, for one, is still a Rangers transfer target.

The Govan side aren’t the only team rebuilding this summer but the difference is that most sides don’t have their first competitive fixture of the new season this week. The Gers do.

Indeed, Caixinha’s side take on Progrès Niedercorn of Luxembourg in Europa League qualification on Thursday, meaning they, along with St Johnstone, will start their 2017/18 campaign before any other team in Scotland.

That is something of an issue considering the lack of preparation time afforded to Caixinha and his new contingent of summer signings. Rangers took on St Johnstone in a friendly match last week. Apart from that the only measure the Portuguese has to go on is pre-season training. This will be a leap into the unknown.

Guessing how Rangers will line up on Thursday has become a sport of its own, with so many unknowns joining the club over the past few weeks. At the back, Wes Foderingham, Lee Wallace and James Tavernier are all guaranteed of their places, given that no potential replacements have been signed.

The centre-back selection is a completely different matter, though. Bruno Alves is expected to become the bedrock of the Rangers’ defensive line-up, joining the Glasgow club from Cagliari. However, the 35-year-old is on international duty with Portugal at the Confederations Cup and will subsequently miss the qualifier against Progrès Niedercorn.

Ordinarily, that would mean one of Danny Wilson or Rob Kiernan would step into the centre of defence alongside 23-year-old Fabio Cardoso, signed from Vitoria Setubal this summer. However, Wilson is still struggling with a knee injury, with Kiernan falling out of favour.

Caixinha experimented with a number of youngsters across his defensive line last season with David Bates and Myles Beerman both featuring. He would surely wish to cling to as much experience as possible on this stage, but Bates could start on Thursday.

Further up the pitch, the guessing games really begin. Suggestions from Murray Park are that Caixinha plans on using Niko Krancjar as a footballing quarterback, making the most of his passing ability from deep.

The Croatian only played a handful of games for Rangers last season before suffering a campaign-ending injury. But if he can overcome fitness concerns there’s no doubt the former Tottenham Hotspur midfielder has the quality to impose himself at this level.

Ahead of him, new signing Ryan Jack is expected to provide Rangers with the midfield mobility they so badly lacked last season with £2.2 million arrival Carlos Pena taking on the playmaker role to make up a balanced midfield three. The true dynamic of that trio won’t be tested until they take to a competitive field but, on paper, there is at least a theory behind their selection.

Based on his background as a coach and hints made in press conferences, it's likely Caixinha will opt for a 4-3-3 formation on Thursday, although flexibility is the hallmark of the Portuguese’s style and so that could shift into a 4-4-2 or a diamond shape.

Barrie McKay could have featured on the left side of the attacking three but Caixinha confirmed on Wednesday the Scot had been training with the Under-20s and would be left at home. “He is not in the squad,” the Portuguese said. “The Under-20s were off so he is not training today.”

That might mean new loan signing Dalcio fulfiling that role. On the other side of the prong, Daniel Candeias is expected to become a key figure for Rangers this season having splurged £680,000 on the Benfica man, although red tape will deny him his debut on Thursday. 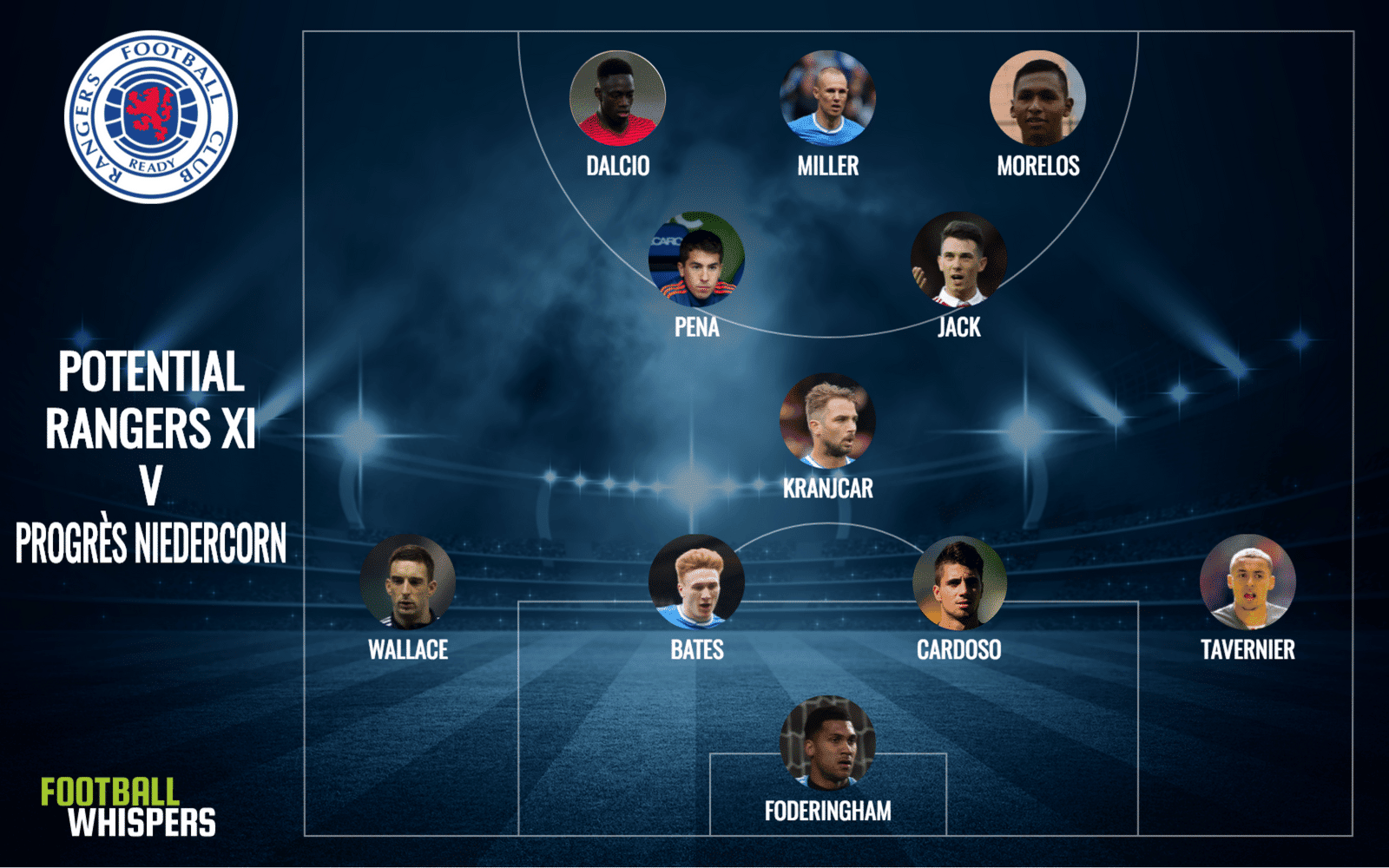 Up front, Caixinha has a number of options. Kenny Miller has been Rangers’ most reliable striker in recent years but there is a sense that this season could see the 37-year-old finally phased out of the first team fold (although that has been said before).

Instead, new signings Eduardo Herrera and Alfredo Morelos will likely vie for the number nine spot with the former a targetman and the latter adept at playing on the shoulder of the last defender. Who Caixinha picks from those two will go a long way to determining the identity of this Rangers team.

The team Caixinha opts for on Thursday will continue to change over the course of the season with more new signings sure to be made. But this is the first glimpse afforded of the Portuguese’s vision of what Rangers could and should be under his charge.