Jurgen Klopp’s Liverpool blitzed the Premier League early on in the season. The 4-3 defeat to Bournemouth brought their impressive 15 game unbeaten run to a disappointing end but as we enter the festive period the Reds are still in the title mix. Something of a rarity for Liverpool fans these days. Klopp’s attack is firing and are currently the top scorers in the Premier League (37 goals) and at their current rate are on target to score 94 in the league.

However, question marks still remain over their defence and the protection they’re offered. At the current rate they’re conceding they’re set to concede 50 goals this season. Many fans will point out that half the goals Liverpool have conceded this season came in just the two league games – against Bournemouth and Arsenal – but the fact remains the players, individually and collectively, are partial to the odd wobble when put under sustained pressure. West Ham scored two goals out of nothing in the 2-2 draw at Anfield.

In dominant wins against Leicester City, Hull City and Watford, Liverpool had momentary lapses in concentration and gifted the opposition soft goals. There’s always the thought when facing Liverpool that you’re going to get chances to score. Despite the turnaround under Jurgen Klopp, the German still hasn’t ironed out all of Liverpool’s defensive deficiencies. It’s this reason that Liverpool are continually linked with centre-backs, with the latest name being linked with a move to Anfield being Southampton’s Virgil Van Dijk. It’s not quite as simple as signing the flavour of the month, they need to fit Klopp’s specific system. So far this season Liverpool average just a little under 60% possession. They’re patient in possession and look to use the centre-backs to build play from the back – the centre-back pair average well over 100 passes between them every single match. 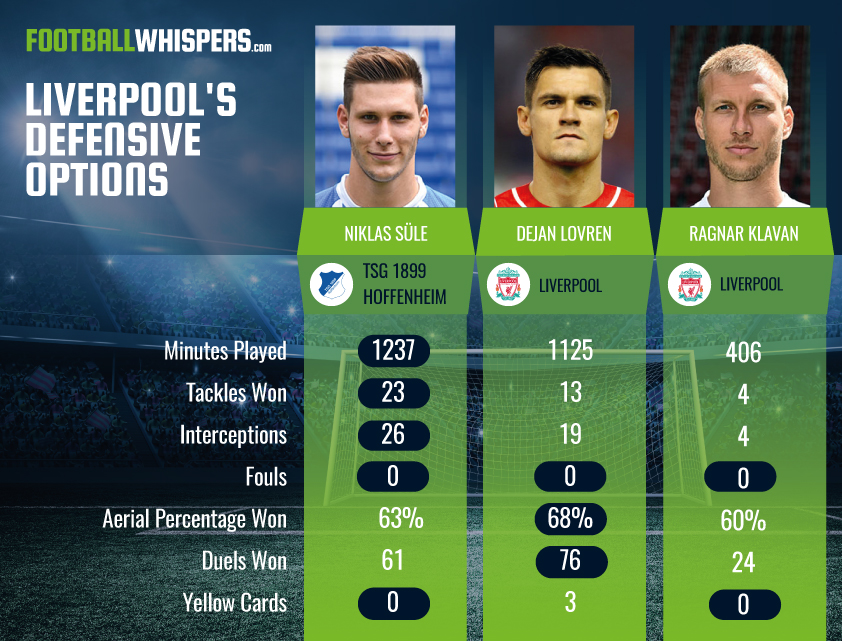 One of the best leagues to shop in to find defenders suited to this is the Bundesliga. Many teams look to play out from the back meaning the centre-backs in the league are not only comfortable on the ball but they’re used to being pressed on a regular basis. With this in mind the likes of Hoffenheim’s Niklas Sule, Gladbach’s Nico Elvedi and Hertha Berlin’s John Brooks would all fit Liverpool’s style. The Reds could also use the January window to bring in a midfielder as back-up to Jordan Henderson in the deep midfield role with Hoffenheim’s Seb Rudy being an ideal candidate.

The Demands on the Liverpool Centre-backs

On paper at least, Liverpool line-up in a 433 system. Klopp’s preferred XI tends to be; Loris Karius in goal, Nathaniel Clyne, Joel Matip, Dejan Lovren and James Milner in defence with Jordan Henderson, Emre Can and Adam Lallana in midfield and Sadio Mane, Philippe Coutinho and Roberto Firmino in attack. As Liverpool look to build from the back the two centre-backs split and Jordan Henderson plays as a third centre-back at times. The centre-backs act as auxiliary full-backs at times. The Liverpool full-backs push on and offer the width with Mane and Coutinho taking up positions centrally. When they’re attacking for sustained periods the movement of the three attackers and two box-to-box midfielders is a thing of beauty and not many teams can cope. 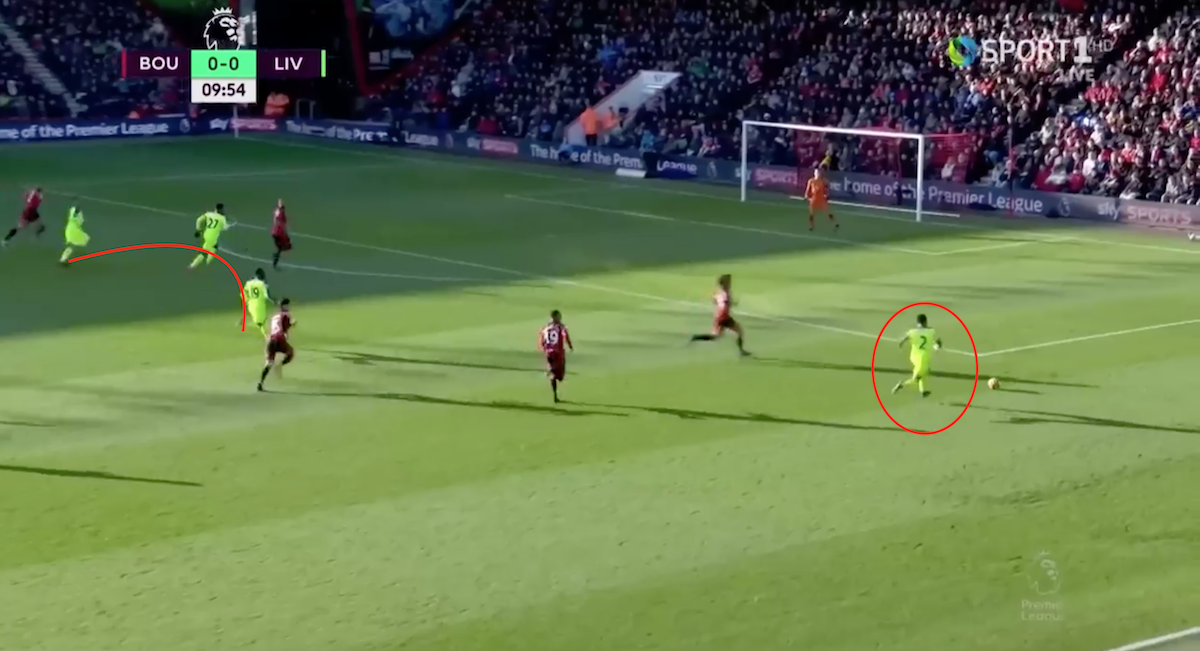 In the picture above you can see full-back Clyne advanced on the right flank with the attacking three all central and all looking to get into the penalty area. This is the normal shape for Liverpool when they’re attacking. 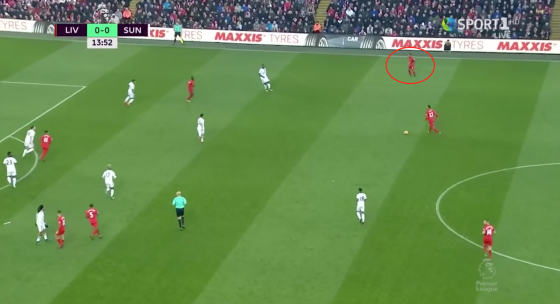 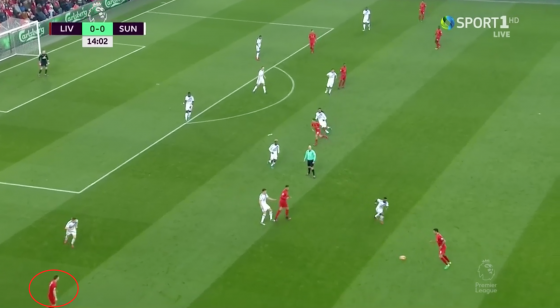 In the two images above, taken from the 2-0 win against Sunderland, you get a picture of how the Liverpool defenders shape up. In the first picture you can see Clyne circled with Matip, the right centre-back, in possession and well inside the Sunderland half. As play progresses and Liverpool look to stretch the Sunderland defence the ball is switched to the left side and it’s practically a mirror of the first picture. Milner, circled, is advanced and hugging the touchline with Lovren, the left centre-back, in possession of the ball well within the Sunderland half.

The pair effectively play as deep midfielders and at times are more advanced than Jordan Henderson. Dejan Lovren averages 70.2 passes and completes 86.2% of them and Joel Matip attempts 62.1 passes per 90 minutes and completes 87.3% of them. Only Jordan Henderson averages more passes than the centre-back pairing. It’s a key area for Klopp’s system.

Nico Elvedi sees a lot of the ball at Gladbach. The Bundesliga side have more often than not used a back three formation this season, similar in a way to how Liverpool line-up in possession, with Elvedi playing on the right of the three. The 20-year-old Swiss centre-back, on average, attempts 70.1 passes per 90 and completes 87.1% of them.

John Brooks plays as a left sided centre-back for Hertha Berlin in the Bundesliga. The side situated in the German capital are having a good season and are currently sat in 3rd position, just the 3 points behind German giants Bayern Munich. Hertha like to build from the back and the 23-year-old American, on average, attempts 66.1 passes per 90 and completes 89.4% of the passes.

Hoffenheim, under new boss Nagelsmann, also use a variation of a back three system. Niklas Sule plays on the right side. The 21-year-old German tops the attempted passes for Hoffenheim with 63.7% per 90 minutes and he completes 89.3% of them. It’s the Hoffenheim player who seems best suited of the three to Liverpool’s system. 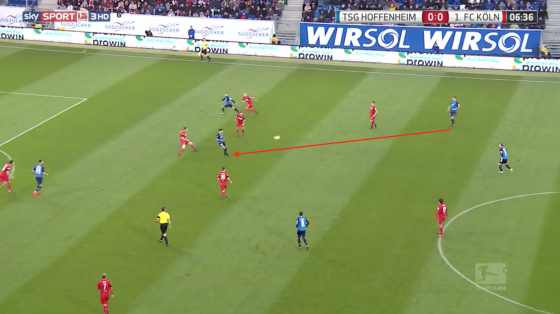 One picture in isolation proves nothing but there are countless examples of Sule pushing into midfield and occupying a position similar to the Liverpool centre-backs. What’s encouraging in this particular example is his choice of pass. He could play the ball 5 yards to his left to the free Hoffenheim man. His team would retain possession. But Sule plays a pass, highlighted by the red arrow, to the Hoffenheim man who has dropped into the space. The Koln player followers the Hoffenheim attacker and this creates space in behind for the Hoffenheim right wing-back to run into. It’s a positive pass forward and not just an easy one.

He’s not bad defensively either. The German giant averages 2.2 tackles and 1.8 interceptions to go alongside the 1.7 aerial duels he wins. Matip’s stats are currently 1.4 tackles and 1.7 interceptions and Lovren’s read 1.5 tackles won and 1.4 interceptions per 90 minutes. However, the Liverpool centre-back pairing win a combined 6.2 aerial duels. This stat though is dependant on the opposition playing long balls.

Why should Liverpool look at Seb Rudy?

Seb Rudy is a 26-year-old versatile midfielder whose contract expires in July. Jurgen Klopp likes freebies and he likes auxiliary players capable of playing more than one position. So far so good for for Rudy. The former Stuttgart player, who has been capped by Germany, can play a variety of roles including full-back, centre-back, wide midfield, as a box-to-box midfielder as the deepest midfielder. It’s the latter role he’s currently excelling at for Hoffenheim. He dictates the orchestra in Julian Nagelmann’s interesting midfield dynamic as well as protecting the defence. 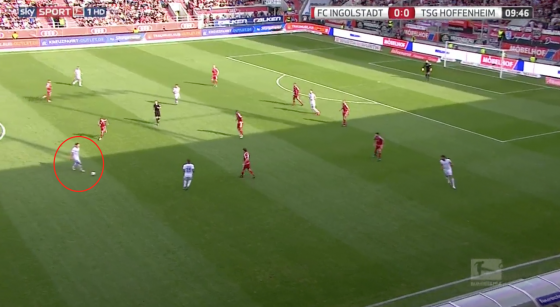 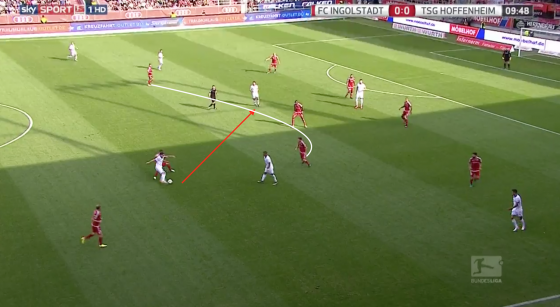 In the two pictures above you get to see Rudy’s vision and execution of a pass. He receives the ball and the FC Ingolstadt 04 player looks to press him in an attempt to block off the Hoffenheim left (where they have an overload) and force him to play a pass to an area of the pitch the home side have players in defensive positions. But Rudy resists the press and plays a, shown by the red arrow, into the feet of the Hoffenheim man behind the Ingolstadt midfield. It’s an incisive pass that takes the Ingolstadt midfield out of the game and gets Hoffenheim at their defence. 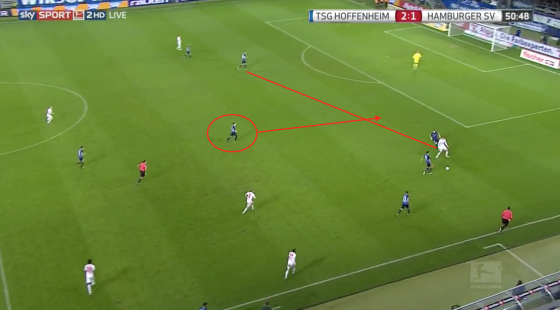 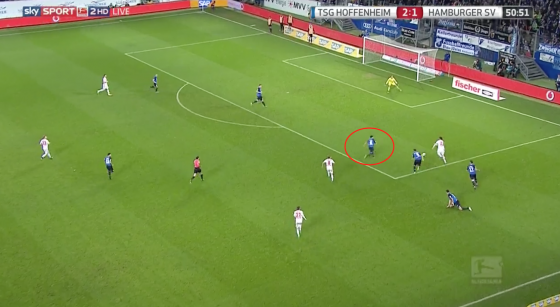 In the next two pictures you see Rudy’s positional intelligence. Hamburg work the ball so the Hoffenheim centre-backs are stretched, as shown in the first picture. It’s a bullseye for the opposition to attack but Rudy spots this, tracks back and ends up winning a goal kick. He doesn’t just hold his position and expect the three players surrounding the Hamburg man to win the ball and it’s why he’s able to put a stop to the attack.

Rudy has 3 assists to his name already this season. He averages 44.2 passes and completes 77.7% of them per 90 minutes. When you consider he plays a lot of risky, progressive passes needed to break midfield lines that’s an encouraging stat. He wins 2.7 tackles and makes 2.5 interceptions per 90 minutes. He’d by no means replace Jordan Henderson. The Liverpool captain has 1 goal and 4 assists to his name this season, makes 4.1 tackles and 1.8 interceptions per 90 minutes and completes 88.1% of the 86.9 passes he attempts.

Rudy may not be a starter but he’d add some depth and potentially replace Lucas Leiva as the squad player capable of playing various positions.

Liverpool fans! Who would you rather sign in January? #LFC #YNWA #TSG https://t.co/2QN5tTccvX