On Saturday March 11, Rafa BenÍtez celebrated a year in charge of Newcastle United. The 3-1 defeat to Fulham was only the Spaniard's 12th defeat at the club, But the former Real Madrid manager has got England’s perennial crisis club back on track.

A win at home to Preston North End on Monday night would confirm their return to the Premier League at the first time of asking.

The Toon go into the game six points ahead of third-placed Reading, but with a game in hand.

Newcastle were, of course, short-priced favourites with the bookmakers to make an immediate return to the top flight. But it is worth noting Aston Villa, who were relegated along with Newcastle, are 12th – 12 points off the play-off pace.

Even more daunting is the number of relegated clubs who return to the top flight at the first time of asking. Burnley and Hull City were anomalies last season, finishing as champions and Play-Off Final winners 12 months after relegation.

Historically, though, teams struggle to make an immediate return. Only three of the 15 sides relegated since 2010 have put that disappointment behind them to clinch promotion the following season.

Five clubs – Blackpool, Portsmouth, Wolverhampton Wanderers, Bolton Wanderers and Wigan Athletic – have all endured spells in the third tier after dropping out of the top flight.

So what has Benítez done to kick-start the Rafalution on Tyneside and get the Magpies back on the right path? 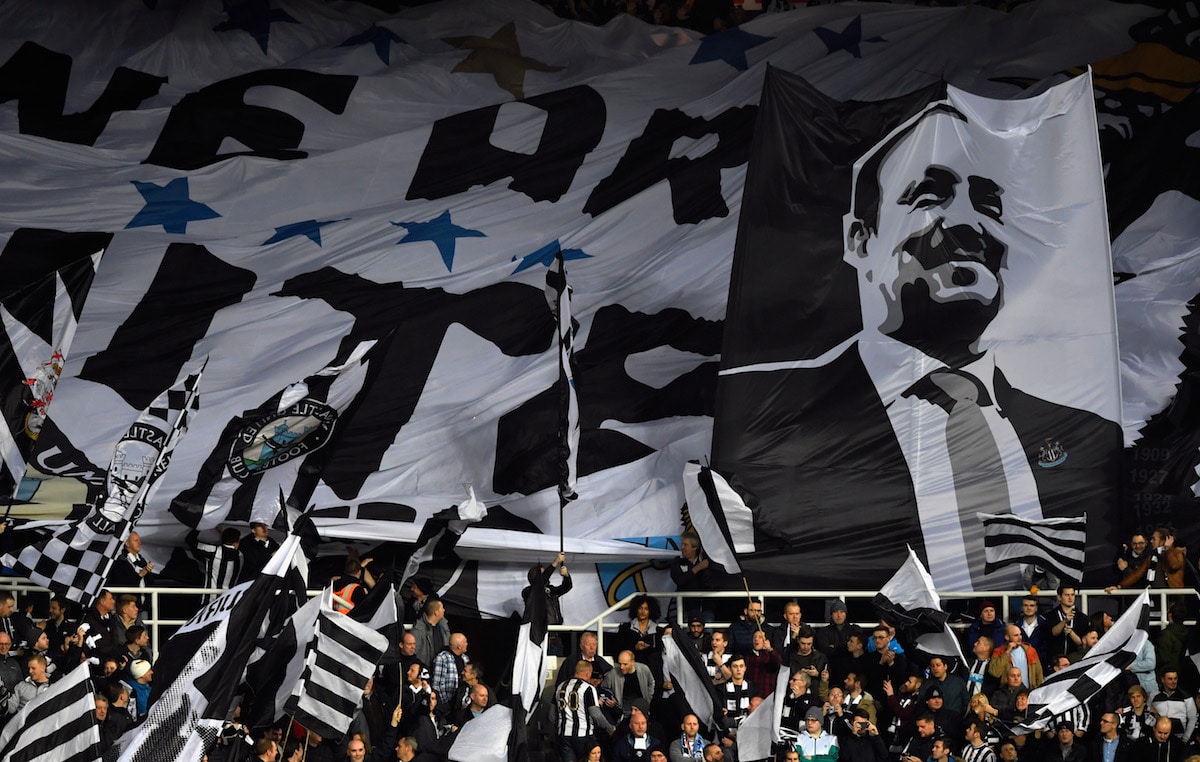 Getting The Fans Onside

Given his pedigree, the Spaniard did not have much to prove when he replaced the hapless Steve McClaren on March 11 last year.

A Champions League winner with Liverpool, and boasting vast experience with Real Madrid, Napoli, Internazionale, Chelsea and Valencia, Benítez was the most popular appointment at St James’ Park since Alan Shearer was drafted in in almost identical circumstances in 2009 and given eight games to keep the club up.

Both men failed to prevent relegation but the Toon Army were quickly infatuated with a man who started the 2015-16 campaign as Real Madrid coach and made their feelings known, leaving controversial owner Mike Ashley with little choice but to try to persuade Benítez to remain with the club in the second tier.

But persuade him he and, armed with a not insignificant chunk of the £87million raised from player sales, Benítez was allowed to reconstruct the side in his own image. 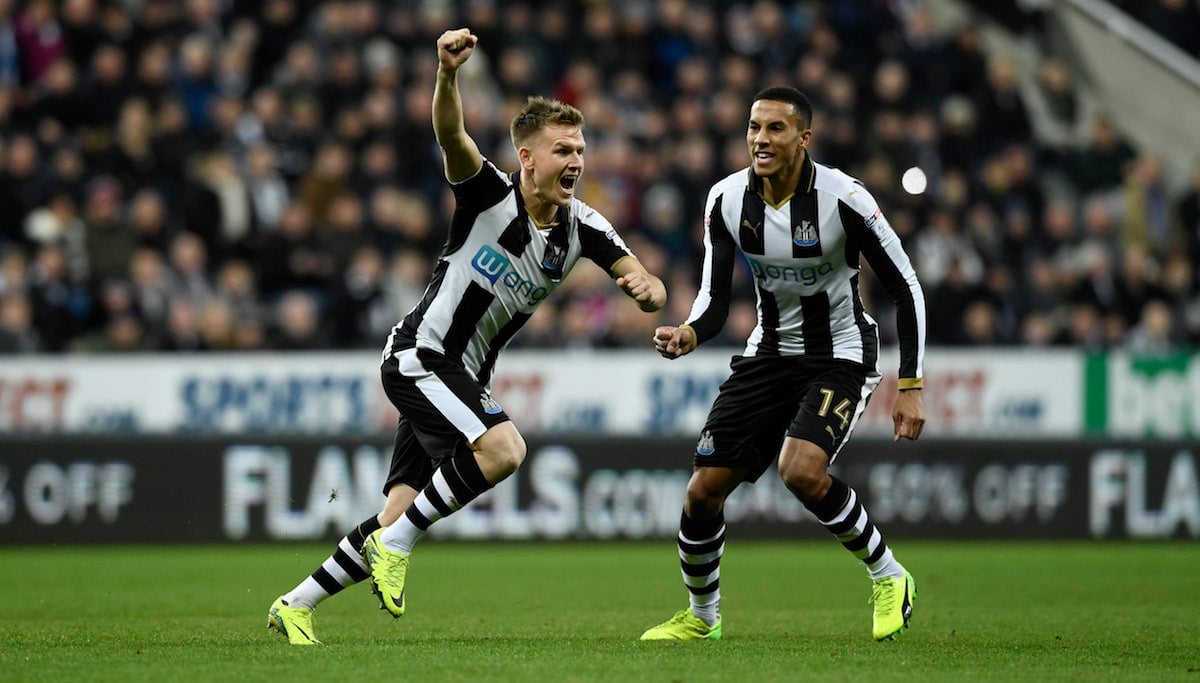 The parallels between this season and Newcastle’s last foray into the Championship can’t be ignored – in 2009-10, the North-East club lifted the Championship crown, although mathematically possible, simple promotion will be enough for the fans to enjoy.

Remarkably, though, he spent less than £3million on Mike Williamson, Danny Simpson, Wayne Routledge and Leon Best. Instead it was Andy Carroll and Kevin Nolan (17 goals apiece) who thrived at a lower level after playing peripheral roles the previous season.

In place of players who had flattered to deceive or had wanted to leave the club Benítez had brought in young, hungry players who knew the English game and, in the case of several, the Championship specifically. Ritchie was, after all, a title winner two seasons earlier with Bournemouth. 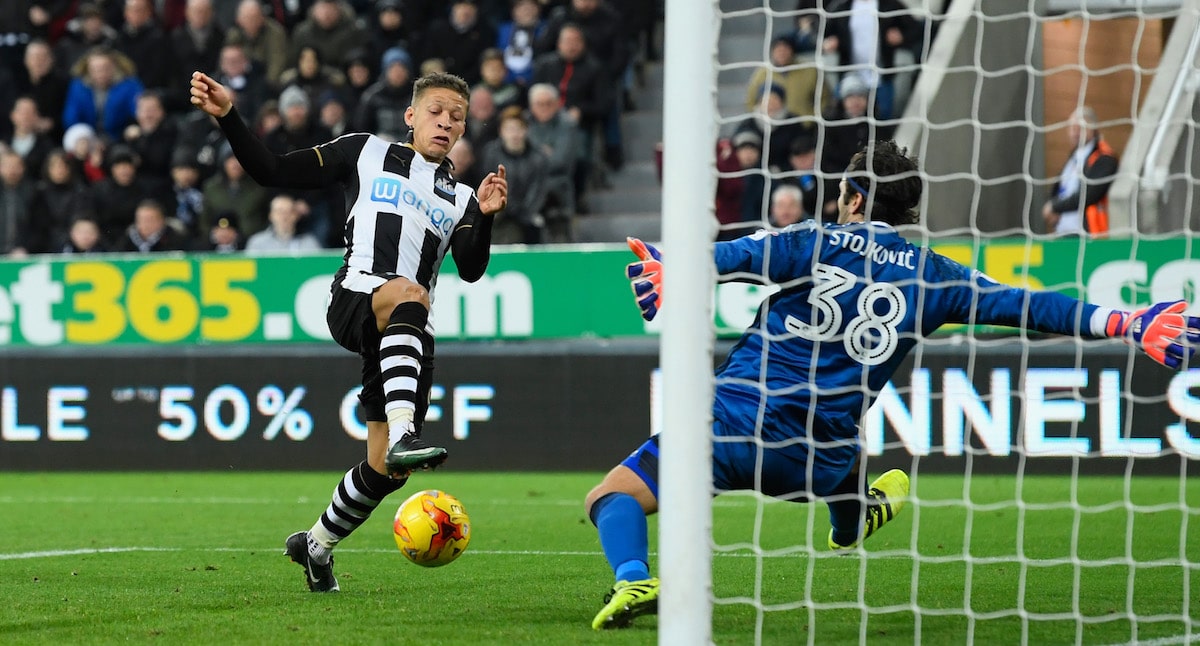 If the number seven jersey is synonymous with Manchester United – think Eric Cantona, David Beckham and Cristiano Ronaldo – then Newcastle would lay claim to being inherently linked with the number nine shirt.

However, in recent years few have done any justice to the number worn with such distinction by Alan Shearer during his decade on Tyneside.

Dwight Gayle could be the man to change that, though. The 26-year-old has made good on his undoubted ability at St James’ Park and plundered 22 goals in 26 league starts to grow into the role.

Speaking about his decision to wear the iconic number, Gayle said: “I asked for it. I knew the previous players that wore it. For me, it was a great achievement to get it in the end.

“Obviously, you know the history it’s had and how big a number it is. To play in front of the fans every week is unbelievable.”

Crucially, Benítez has built the side around Gayle’s biggest asset – his blistering pace. The striker is not limited to chasing balls over the top, though. He possesses a poacher’s instinct to be in the right place at the right time and a lot of his goals this season have come from inside the six-yard box with only three coming from outside the penalty area.

As the images below demonstrate, Gayle is a master at picking out space and going undetected in the penalty area.

In this still (below) he peels off the right-sided centre-back for Nottingham Forest and waits. He gets a bit of luck with the flight of the ball but is left in too much space before tucking home. 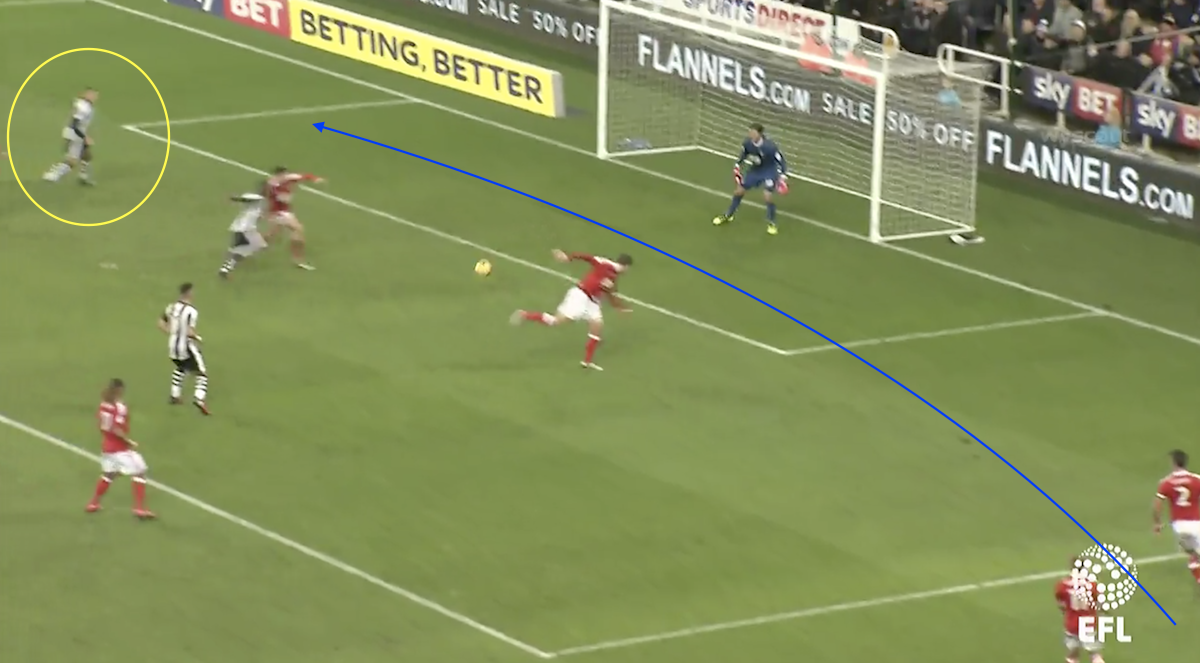 It is similar story against Birmingham City – a game in which Gayle scored three poacher's goals – where he is able to lurk just outside the six-yard box and wait for a cross which should never be allowed to reach him. 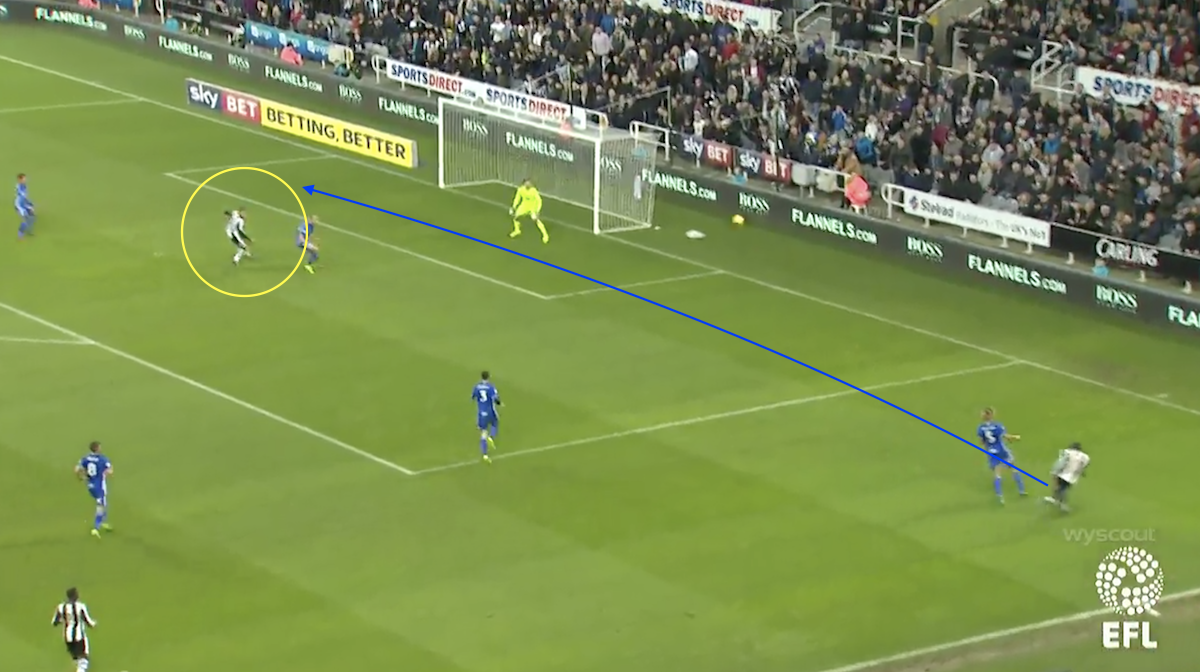 And finally, against Leeds United, with minimal movement he shakes off the attention of the defender in the first phase before waiting for a low cut-back to score with ease. 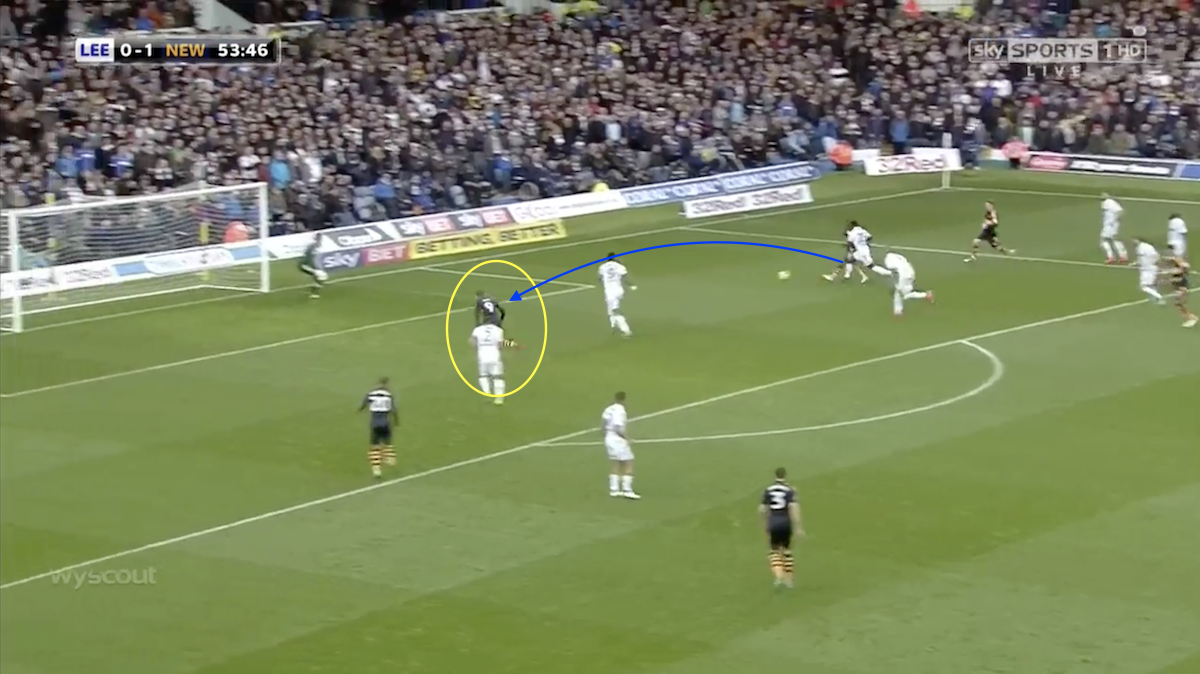 Tightening Up The Defence

At the other end to Gayle the Magpies have tightened up immeasurably at the back. With 38 goals conceded they boast the second-best defensive record in the Championship.

Benítez signed five defenders and goalkeeper Mats Sels in the summer but, apart from Ciaran Clark and DeAndre Yedlin, they have struggled to make an impact.

So what has he done to plug the previously porous backline?

Known as a meticulous, tactically astute and defensively organised coach, Benitez has done what he knows best and made sure Newcastle are hard to break down when they don’t have the ball. 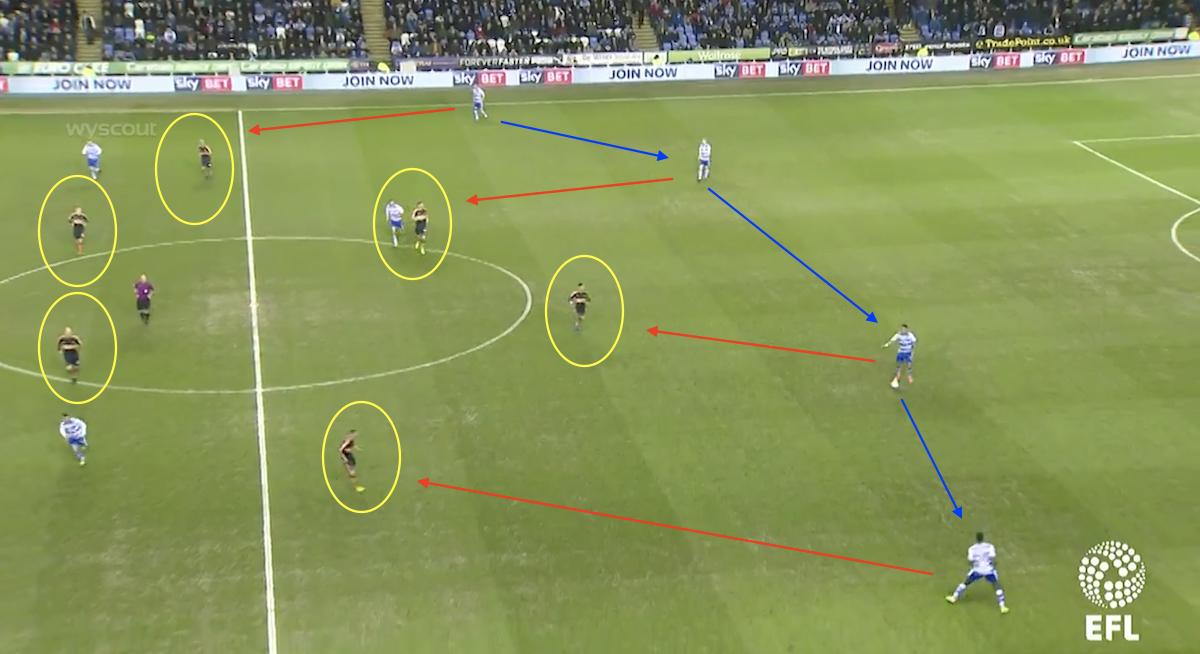 In this still you can see (circled) how Newcastle set out to make themselves hard to play through; closing off the lines for Reading and ensuring the Royals can only knock the ball across the back line while waiting for a gap to exploit. 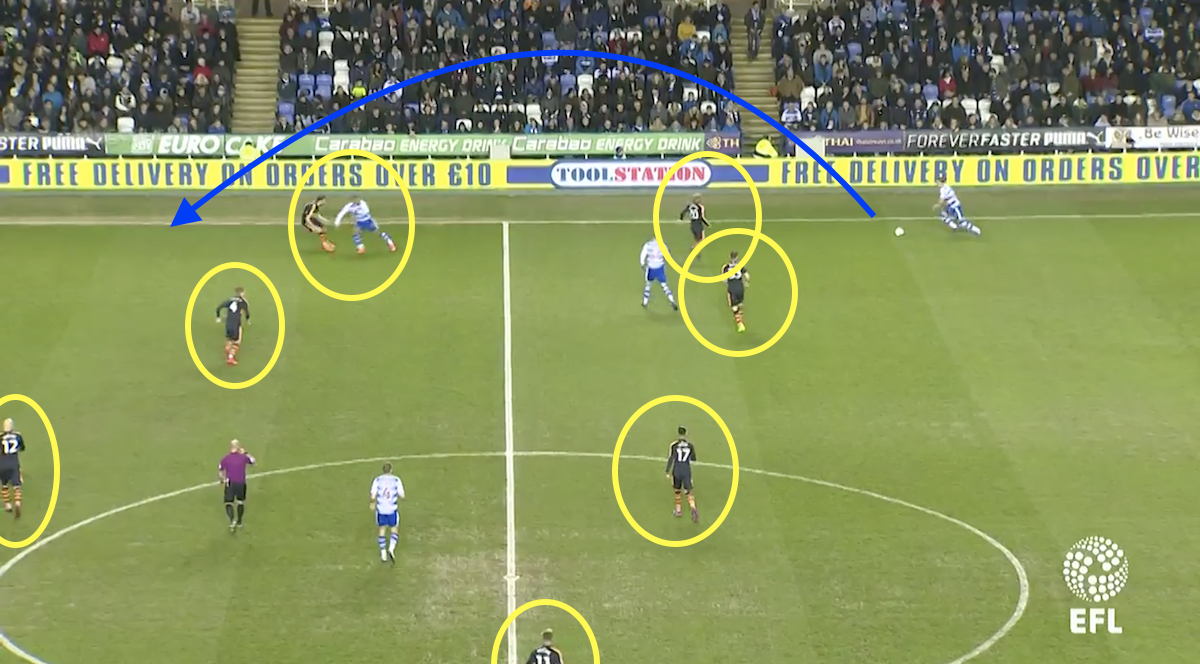 Almost a minute later in the same game Reading, having finally grown impatient and the full-back hooks a hopeful ball up the line where Paul Dummett snuffs out any danger.

Ready For The Next Step

Newcastle are all but assured a place in the Premier League next season. After Monday's game, they'll have two more chances to get the job done regardless. But unlike their last promotion from the Championship under current Brighton manager Hughton, they have a ready-made Premier League boss in Benítez.

Hughton was controversially sacked in December 2010, four months into the new season with the Magpies comfortably in mid-table. Benítez stepped into the unknown when he agreed to remain with Newcastle in the second tier. But in guiding the Tyneside outfit to promotion he will return to a level he has previously thrived at.

The first part of the Rafalution is almost complete.

NOW READ: IS RAFA BENITEZ SET FOR A RECORD-BREAKING SEASON WITH NEWCASTLE UNITED?