The date has been ringed in countless diaries for several weeks. February 14th; Valentine's Day. A night for romances to be rekindled, heartstrings to be tugged…and the Champions League last 16 to take centre stage. So toss out those Aldi chocolates and forget about the petrol scented flowers because Real Madrid versus Paris Saint-Germain and Porto against Liverpool is frankly going to be better than any Valentine's Day special offered at your local Harvester

No team has scored more set-piece goals in the Champions League group stages than Porto side with seven – eight if you count an own goal that stemmed from one. Most of their goals (53 per cent) are coming from these situations and, taking into account that they’ll double down on their counter-attacking approach against Liverpool, the hosts will be counting on them to threaten Jürgen Klopp’s side who have shipped four times from set pieces in Europe this term.

When you look at the teams with more set-piece shots, Porto are ranked 13th in the group stage. As expected, more dominant sides will spend a larger amount of time near the opposition box and will, therefore, have a greater chance of wining fouls and creating from them. This also speaks to Porto’s effectiveness from set-plays. But what makes them productive?

Ahead of Wednesday's meeting at the Estádio do Dragão, Football Whispers have taken an in-depth look at the Dragões' effectiveness from set pieces.

Firstly, the individuals; Sérgio Conceição’s side has more than just a couple of aerial threats. Centre-back duo Iván Marcano and Felipe, forwards Vincent Aboubakar and Moussa Marega, as well as defensive-midfielder Danilo, are all over six foot and very capable in the air.

Behind the trajectory of the ball in almost 80 per cent of the team’s set-pieces is Alex Telles, a left-footed left-back with a great delivery. An array of targets combined with a player who can precisely whip a cross in makes them very unpredictable and they’ve been taking full advantage of it.

While it’s basically always the same player taking them, they alternate well between aiming at the near and far post zones, as well as utilizing short passing options at times. That said, we’ll be looking at some of their more patterned movements within each of those set-piece categories.

The natural tendency to defend against such a physically imposing side in these moments is to include a lot of men in your own box and to – partially or fully – turn your marking scheme into a man-marking one. Porto’s system is built to capitalise on that, winning space in the box mostly via dragging opposition players.

There’s a slight tendency for Porto to aim corners for this area of the box (44 per cent of their 27), even more so when Telles takes them from the left side of the attack – 66 per cent of his out-swinging corners end in this zone.

Porto’s most common movement tends to start with one or two of their players (usually the centre-backs) at the top of the box. They will then rapidly rush onto the near post to connect with the cross. This movement tends to happen regardless of whether the ball is aimed there since they will drag at least one defender with them and vacate space elsewhere.

While far post corners are common as well, their wide free-kicks – even ones happening quite deep within the opposition midfield – have a major trend with close to 80 per cent being aimed towards the far post.

When it comes to these free-kicks, they are also almost exclusively in-swinging – this means that, from the left, a right footed player like Sérgio Oliveira or Herrera will take over instead of Telles.

As previously mentioned, those near post runs happen even when the ball is hit long. In fact, it's not uncommon for Conceição’s side to turn all of their aerial assets into bait with those kinds of runs, leaving a less expected target like Herrera completely open on the far side where he is then able to knock the ball back to the main men. 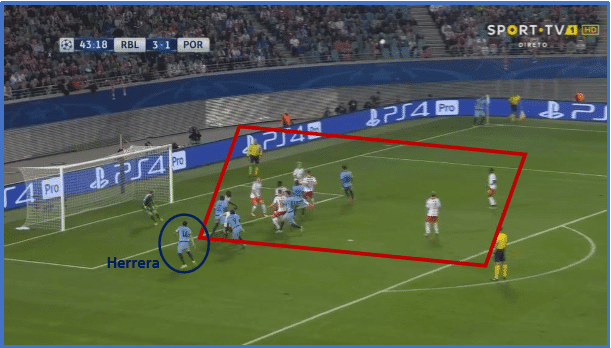 Between the movement of the players and the ball falling where the defence less expects it, the opposition is kept in a very uncomfortable defensive situation.

While less common and harder to predict, these all have the same purpose: generate space in the box via a wide combination. They’re tough to form a pattern around since they very much depend on what their opponents do and will differ every time. However, there are a couple of interesting examples in the video below.

In the first, Telles doesn’t have the support of just one player but two – Oliveira and Yacine Brahimi. This way they dragged two defenders out of the box while still keeping the numerical superiority to overcome them and gain space for a cross (that ends up not being delivered).

The second is arguably Porto’s best goal of the season. A short free-kick in which Telles delivers it to Ricardo – the other full-back who can also deliver a cross – for him to take advantage of the space out wide. This situation offers Porto’s men in the box an extra five seconds of movement before receiving the cross, which the Besiktas players were not expecting. 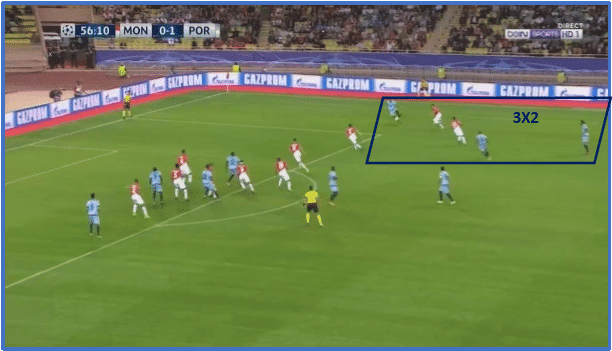 There are two details worth noting in this movement: Felipe pretending to move to the back of his marker before sprinting in the opposite direction to receive the ball and Aboubakar blocking the marker from going after him – a clever, seemingly deliberate, action.

Finally, onto the long throws. On the left side, Telles is always behind them, but on the right they only threatened with these when Miguel Layun – who recently moved to Sevilla – or Maxi Pereira play.

These plays consist simply of both centre-backs moving into the box to win as many knock-downs as possible. In a match like the one against Liverpool, they’ll probably have to compromise and move only one of them forward.

In the first example of the video, Marcano’s movement is particularly impressive. The Spanish defender starting the play far from his direct opponent, to gain momentum for the aerial duel. 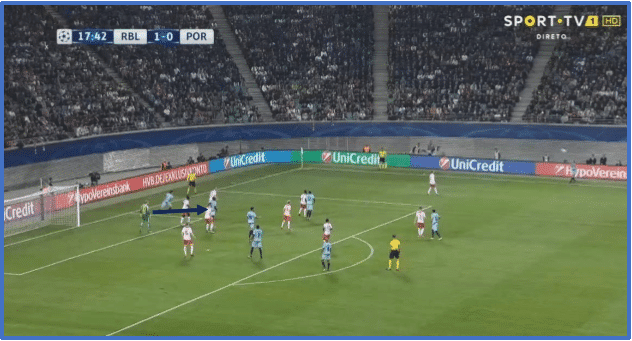 Porto are thoroughly impressive in the way they take advantage of set-pieces but there’s always ways to stop them. Firstly, a lot of their moves consist of pulling apart man-to-man defences, so a strong, well prepared zonal marking scheme will halt a lot of what they try to pull off. This is something that Liverpool should look into, as they normally use a mixed scheme with a man-marking focus – without great success.

Secondly, they are very reliant on certain players to be threatening. They have a lot of weapons in the starting XI. But most of the replacements do not have the physical characteristics to keep the same level of danger. Through injury and suspension respectively, Porto will be without Danilo and Felipe for the first fixture against the Reds which means their two best aerial targets are out of the picture. And if anything ever happens to Alex Telles their world will turned upside down – the Brazilian hasn’t missed a minute of football this season.