Everton’s moves in the transfer window so far suggest that their deals have been in the offing for some time.

Davy Klaassen, Jordan Pickford, Michael Keane, and Sandro Ramírez all arrived with the transfer window barely open, and in the case of a few the deals were done much earlier.

With Romelu Lukaku heavily linked with a move away, the club are likely to have an extra pot of cash to go alongside that already provided by the club’s part-owner and majority shareholder Farhad Moshiri.

A large chunk of this money will go on replacing Lukaku’s strengths and, Everton hope, his goals.

Wayne Rooney’s return to Goodison Park is looking more likely by the day, though there is a stumbling block in the shape of a wage which no longer match his ability.

Even if Rooney does rejoin, it’s unlikely that he’ll be able to lead the line on his own and could instead play a free role behind other forwards including Sandro.

The striker most recently linked with a move to Merseyside is Arsenal’s Olivier Giroud, and the possibility of him leaving the Gunners became even more likely when they signed his compatriot Alexandre Lacazette for a club record fee which could surpass £50million.

With Sandro already on board, Rooney rumoured, and the burgeoning talents of Ademola Lookman and Dominic Calvert-Lewin waiting in the wings following impressive showings at the U20 World Cup, Giroud could be the final piece of Everton's puzzle.

Where their manager Ronald Koeman decides to put these pieces is another question entirely, but the Toffees involvement in the Europa League this season may have convinced the Dutchman that it’s better to have too many options, as they look to go one further and challenge for the Champions League spots.

Giroud is far from a like-for-like replacement for Lukaku, but he does posses a few similar strengths, with his physical strength being one of them.

While not as bustling and dynamic as the Belgian forward, he would replace he does have an awkward rigidity about his game which can make him difficult for defenders to keep under wraps.

This often makes up for his lack of pace, but his sluggishness in free space can sometimes hold him back and mean that he misses out on chances to score on the break.

However, if Everton have other players such as Sandro, Lookman, Calvert-Lewin, plus their stock of attacking fullbacks doing some of the legwork, then Giroud could thrive.

His ability in the air could even rejuvenate Leighton Baines who will look to use his cultured left foot to cross from the left, setting his centre forward up for numerous headed chances.

The Frenchman appeared sporadically for Arsenal last season, and despite being in their Premier League match-day squad on 32 occasions, he only made 11 starts. But when judging his goal-scoring contribution more fairly, using the per 90 minutes metric rather than per appearance, he was among the best in the league and actually more prolific than Lukaku!

He also managed the same amount of headed goals as the Everton man despite playing the equivalent of 22 fewer games, and all of this in an Arsenal side normally known to prefer keeping the ball on the deck.

He also replaces Lukaku’s left-footedness, and both have a powerful strike on this side. His scorpion kick goal with his left boot, which was up there with the goals of the season in 2016/17, showed his inventive side, and his goal in June's World Cup qualifier versus Sweden showed he has the ability to pull off the spectacular.

Giroud would give Koeman an option which he currently doesn’t have in a season which promises to be a busy one. Whether making the impact from the bench as he did at Arsenal last season, or starting alongside quicker attackers, the striker could prove to be a shrewd bit of business and mean that Everton would have all the tools they need in the striking department. 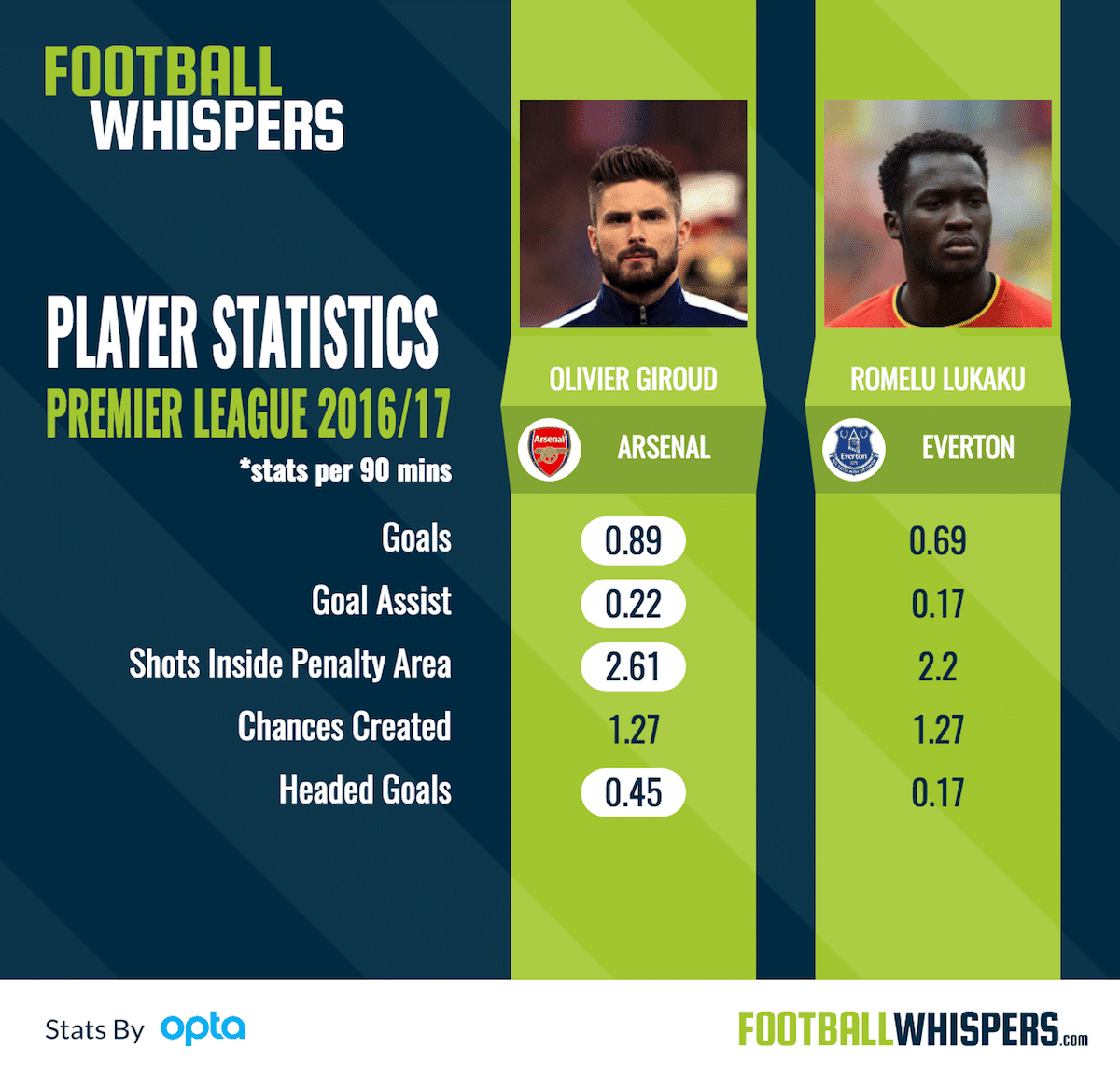 While none of them have the all-round game of Lukaku, the manager and his director of football, Steve Walsh, should be able to use the money to replace the component parts in other areas, even if they can’t get the whole package in one player.

At times last season Koeman gave the impression that he was unhappy with certain aspects of Lukaku’s game, especially when it came to pressing and defensive work.

“There are little details in his game he needs to improve, and for sure in two years he will be a better player,” he said.

“I can't change his quality in front of the goal, but I can change the rest of the aspects in football, to do good pressing.”

The dynamism around a hard working if slower Giroud could improve the team in this regard, and give the club the depth required to challenge on all fronts.