Julian Nagelsmann has transformed Hoffenheim since he was appointed as first-team manager in February 2016 and not just on the pitch but off of it too.

The 30-year-old took over from Huub Stevens with the club facing relegation after a poor start to the season. When the Dutchman called time on his Hoffenheim reign after 20 games of the 2015/16 season, his side had won just 2 of their Bundesliga matches.

Nagelsmann’s appointment belatedly kickstarted the season for the club. A season which had started with much hope following on from their 8th place finish the season prior.

The team picked up 23 points from the 42 on offer and this form saw the side finish a point clear of a relegation play-off match and 4 points clear of automatic relegation.

The young manager, thrown in at the deep end, had passed his first test – avoid relegation.

Hoffenheim always planned for him to take over as manager but Stevens’ resignation quickened their plans.

For those familiar with Nagelsmann this wasn’t a surprise. Bayern Munich had already tried to bring him to the Allianz Arena after his impressive performances in charge of Hoffenheim U19’s.

He won the Bundesliga Championship with the side in 2013/14 and made another appearance in the final in 14/15. Bayern wanted him as their u23 manager but Nagelsmann rejected their advances. He’s an innovator, a motivator and a visionary. It goes to show, yet again, that you don’t need to be a top level player to be a football coach.

His first transfer window as manager saw the side lose yet another star striker in Kevin Volland. This follows on from the 2015 summer departures of Anthony Modeste and Roberto Firmino.

Not replacing their goals played a huge role in Hoffenheim’s freefall down the table in 2015/16.

However, this time around Nagelsmann went about replacing the players. Hoffenheim signed loanee striker Andrej Kramaric to a permanent deal as well as bringing in Darmstadt forward Sandro Wagner. In midfield the club signed Lukas Rupp, from relegated Stuttgart, Kerem Demirbay from Hamburg and Kevin Vogt from Koln.

All five players were influential in Hoffenheim’s undefeated start to the season and their subsequent fourth place finish in the Bundesliga. It’s been a team effort which has seen them become the Bundesliga’s second surprise package of the season behind RB Leipzig. Demirbay described the team as a “super unit”, and you can see why.

During the 2013/14 season Hoffenheim were described as great entertainers as they finished the season having scored 72 Bundesliga goals. Usually, it would have been enough for European qualification but Hoffenheim finished in 9th position because the team shipped in 70 goals. It worked out that the team conceded 2.05 goals per 90 minutes on average.

It was an improvement on the season before but still not good enough if they had European aspirations. Hoffenheim finished the 15/16 season, which saw them finish in 15th position, conceding 54 goals, or 1.58 goals per 90 minutes. Once again an improvement but without the attack firing it meant their defence still wasn’t good enough.

Nagelsmann identified this and went about looking at ways to fix the problem. They needed that extra layer of security and it worked. The team conceded 1.08 per 90 minutes  over the entirety of the season which is remarkable when you consider they conceded six in their opening two matches.

Take those two matches out of the equation and Hoffenheim conceded just the 0.9 goals per 90 minutes. A marked improvement.

So how has Nagelsmann done it? How has he turned the leaky Hoffenheim into a relatively defensively solid outfit?

In the two pictures above, taken during Hoffenheim’s 4-1 defeat at the hands of Schalke last season, you can the home side using a back four. It’s by no means the most disciplined four with Schalke capitalising in both instances on a disjointed line to score. Despite Hoffenheim using a midfield three, with one of them supposedly sitting, they looked stretched and exposed.

Hoffenheim have moved away from the 433 system and now use a 352 system. The picture above, taken from Hoffenheim’s 1-1 draw with Bayern Munich, shows how they line-up. From right to left it’s Niklas Sule – now at Bayern Munich – Kevin Vogt and Benjamin Hubner.

Seb Rudy – now with Sule at Bayern – is the deepest midfielder with Nadiem Amiri and Kerem Demirbay alongside him in midfield. Pavel Kaderbek as the right wing-back and Steven Zuber as the left wing-back. Sandro Wagner and Kramaric are leading the line as the two.

Kevin Vogt joined Hoffenheim in the summer from Koln for a reported fee of €1.5 million due to the fact the player was in the last year of his deal. Originally a box-to-box midfielder, Nagelsmann has positioned Vogt at the centre of his defensive three in an attempt to utilise not just his calmness and composure. It also helps that he stands at 6ft 4.

He’s been a shrewd signing and almost acts as a second defensive midfielder alongside Seb Rudy. He pushes into midfield when in possession in attempt to turn defence into attack. 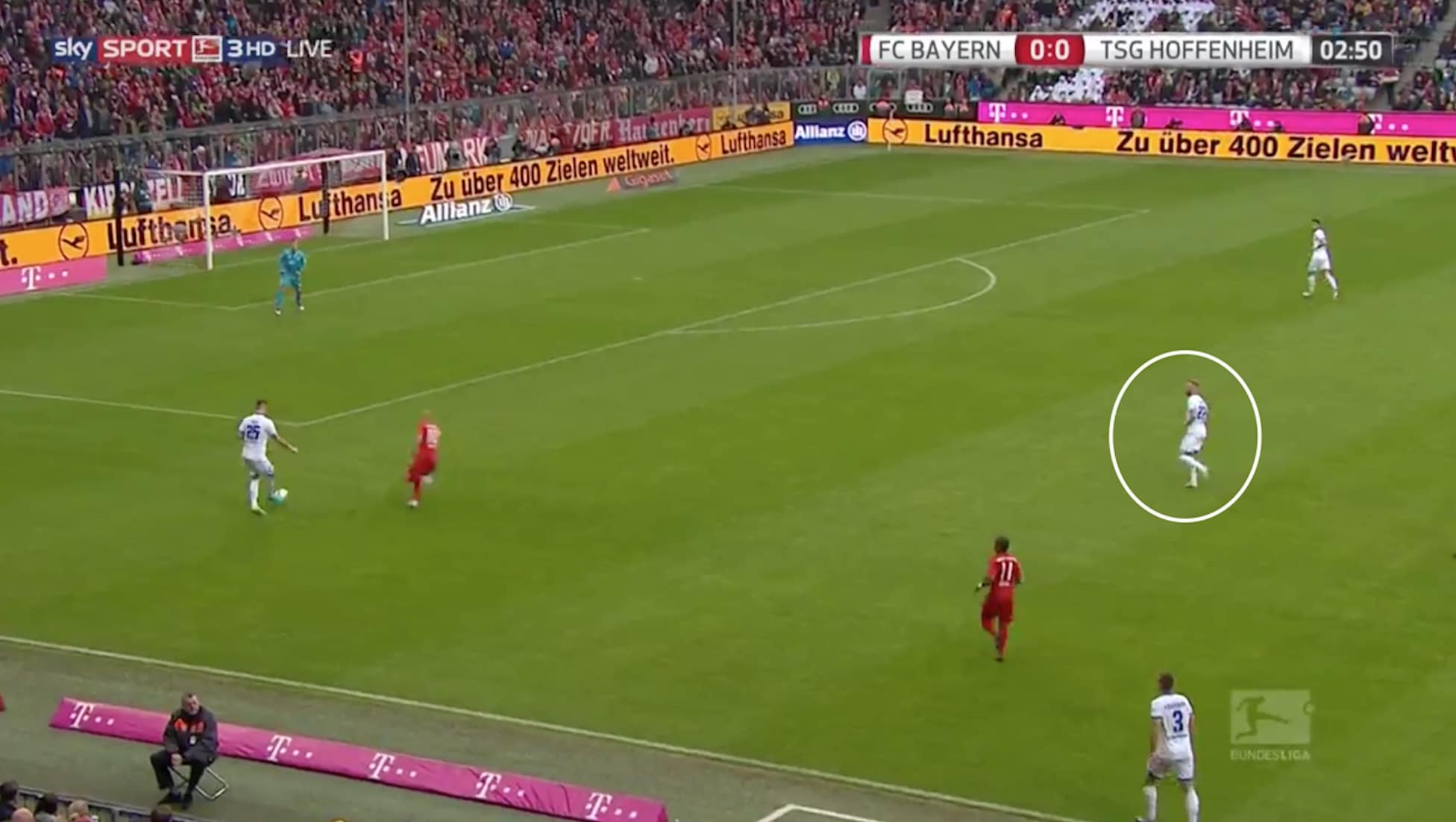 In the picture above Niklas Sule is passing the ball back to ‘keeper Baumann as Arjen Robben presses him and Hoffenheim resist the urge to go long as they look to play out from the back. Vogt is circled in white. 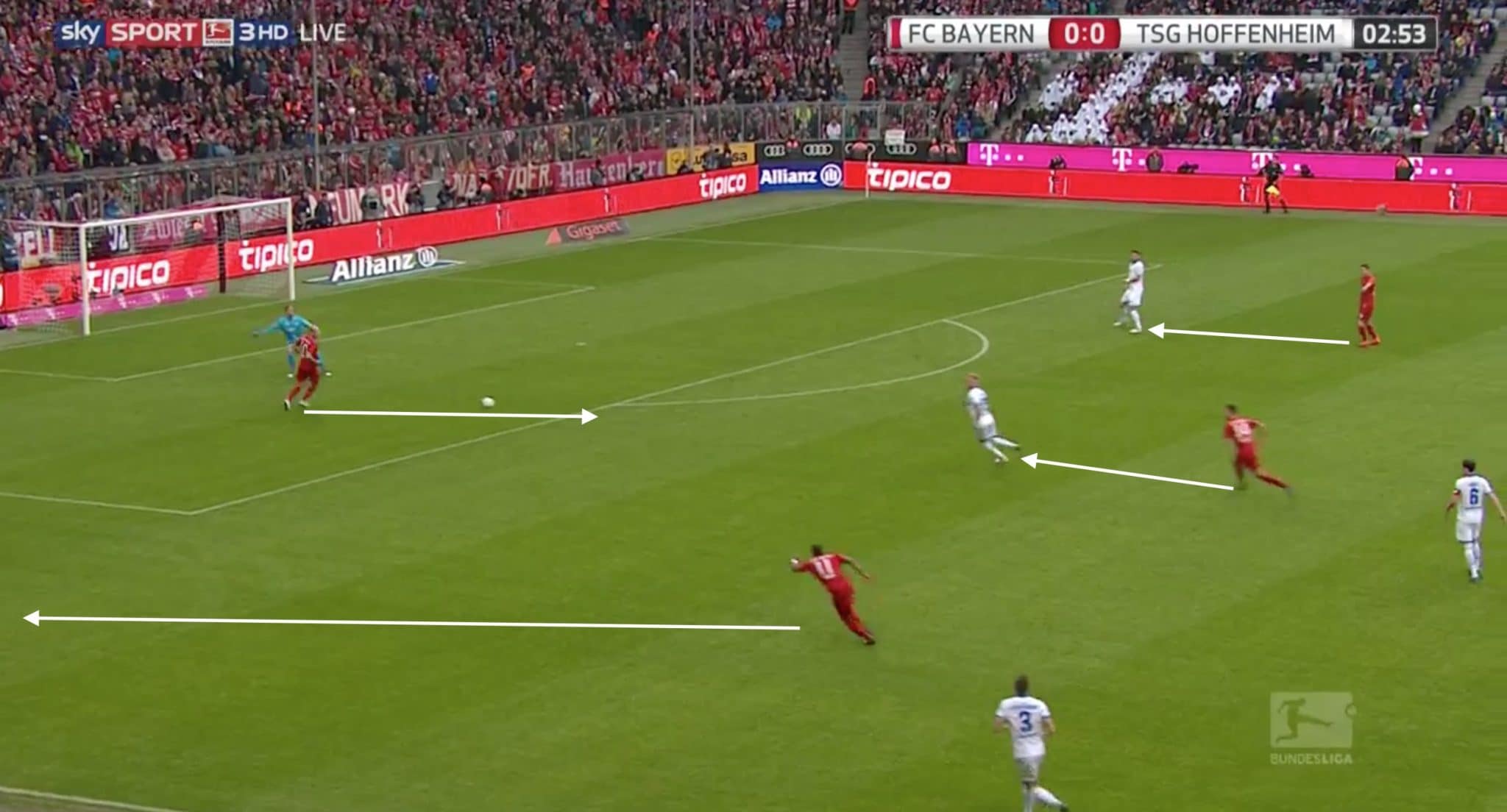 In the next picture you see the Bayern Munich press in full swing. Baumann plays the ball out to Vogt and straight away he’s being pressed. Robben cuts the pass back to Baumann off as the other Bayern Munich players close in to cut off Vogts other passing options. 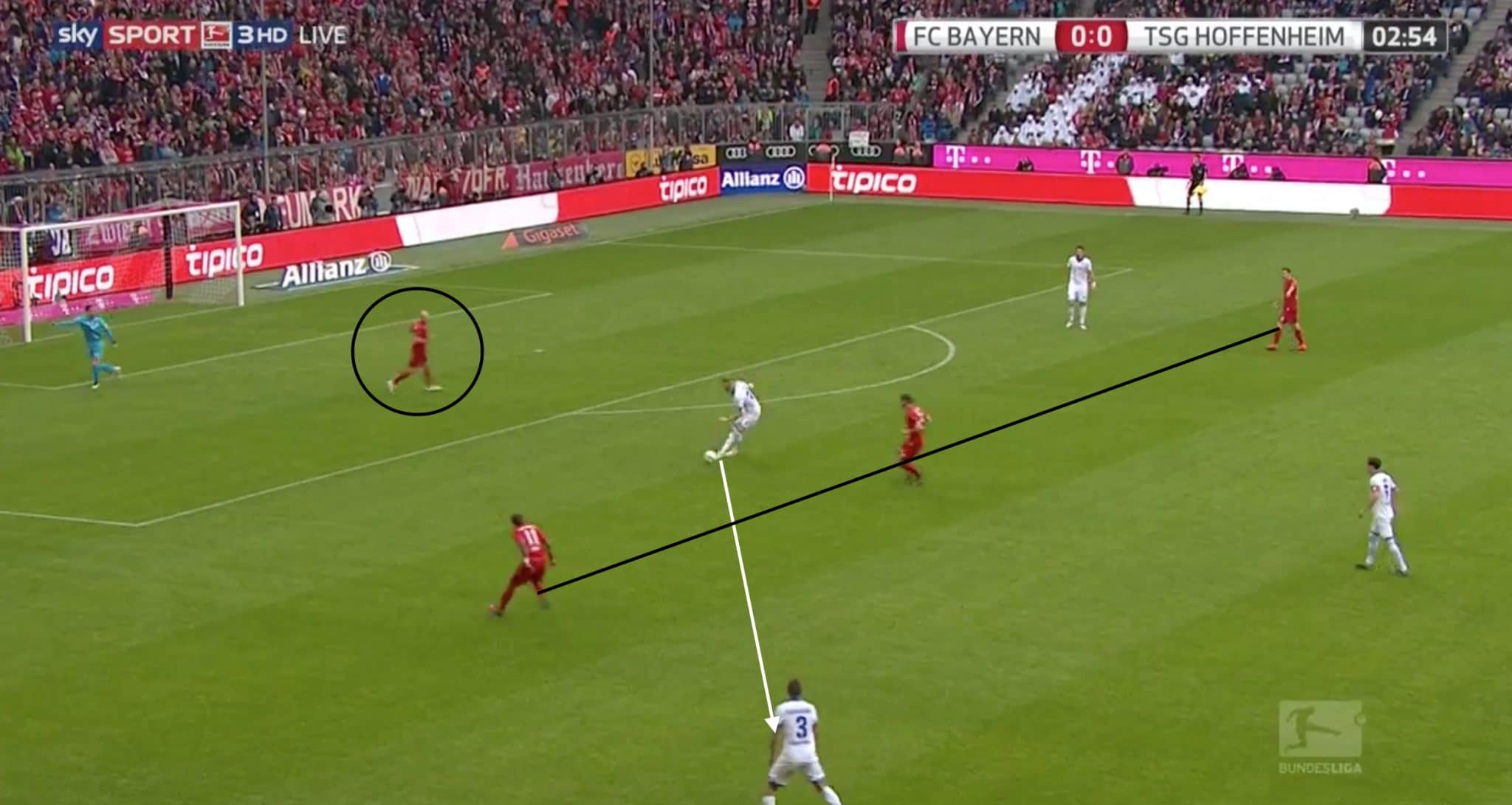 Vogt, used to playing in midfield under pressure, isn’t easily rattled and doesn’t waste possession. Instead he plays a clipped pass to the Hoffenheim right-back and between the Bayern pressing line taking four of their attacking players out of the game and literally turning defence into attack. 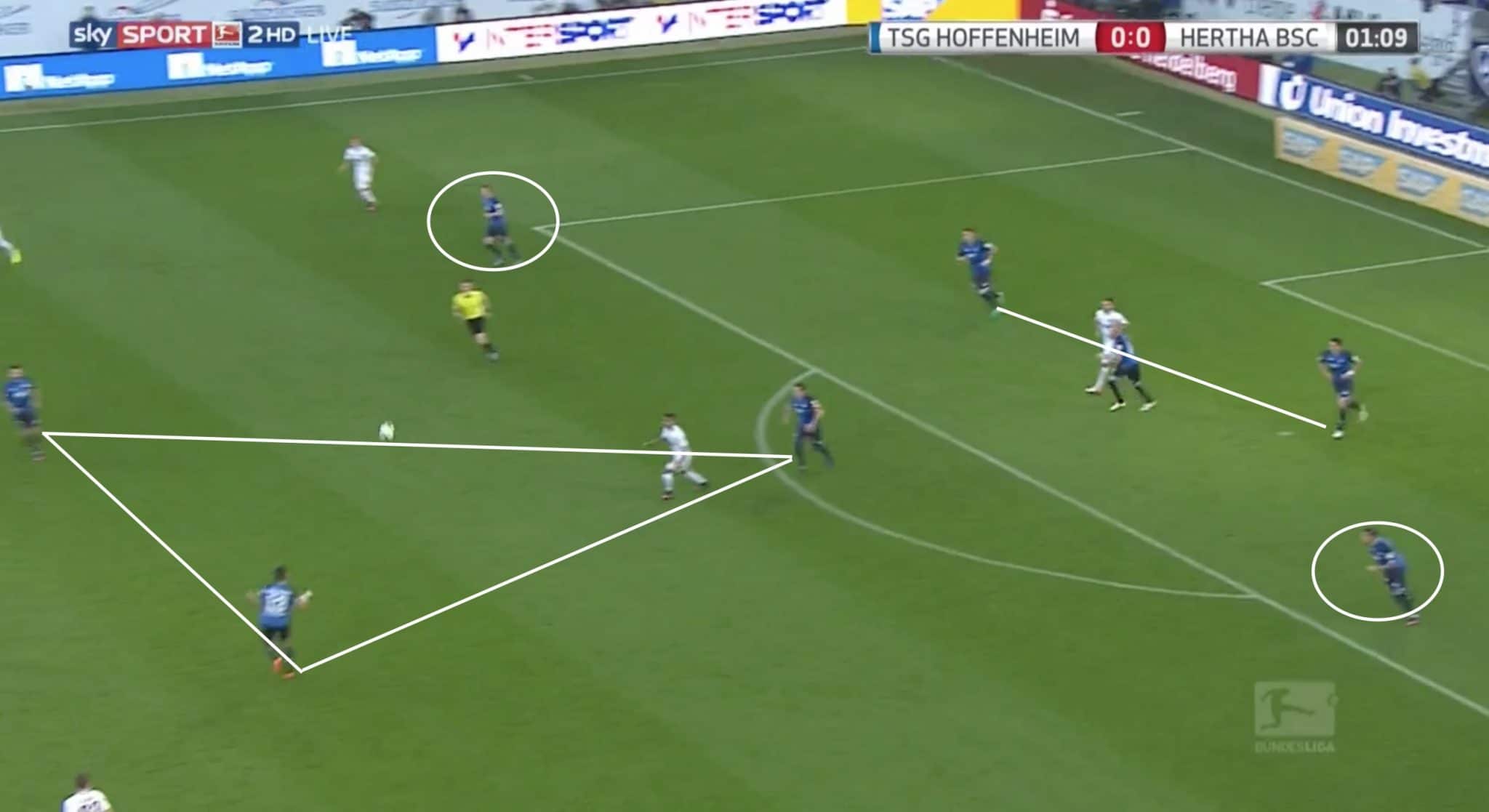 In the picture above you can see the Hoffenheim shape. The three centre-backs, the two wing-backs and the three man midfield. Rudy as the deepest midfielder with Amiri and Demirbay as the advanced two. It’s the latter two who are influential in the attack. 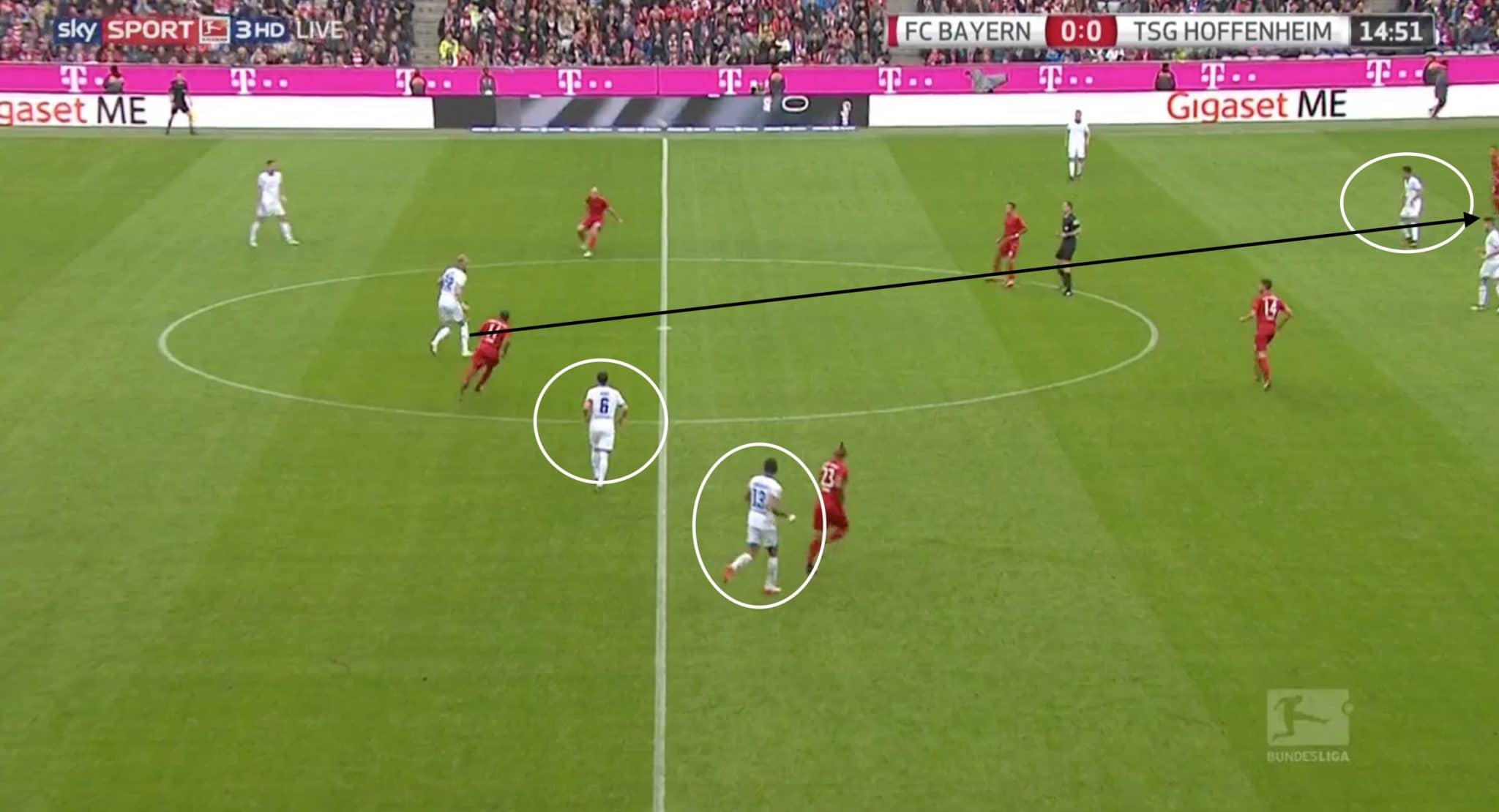 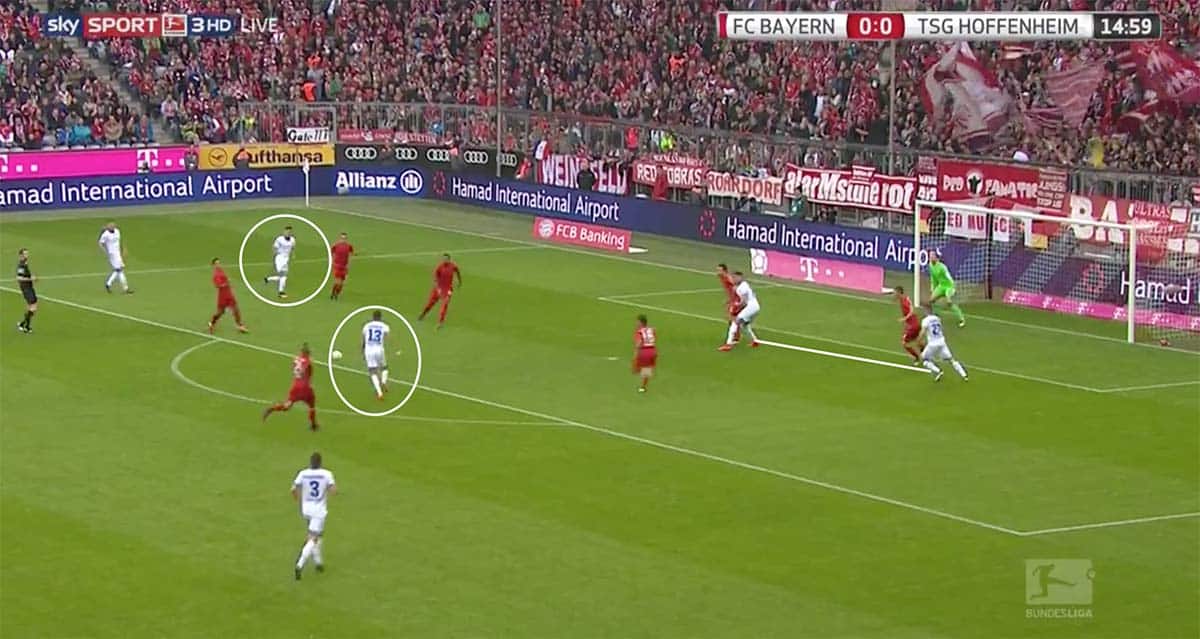 The above two screenshots are taken in the build-up to the Hoffenheim opener against Bayern Munich. The three centre-midfielders are all circled to highlight their positions. In the first screenshot Vogt is in possession of the ball and plays a incisive pass, shown by the black arrow, to Amiri.

Amiri drives into the Bayern penalty area and the two strikers, Kramaric and Wagner, take up central positions pinning the two Bayern players closest to them which frees up space just outside of the penalty area. Amiri plays the ball back to Demirbay, who has made up the space from the deeper role he initially started in, to fire home past Neuer.

It’s a common tactic used by Hoffenheim. One of the three midfielders takes up an advanced position and the other arrives late. 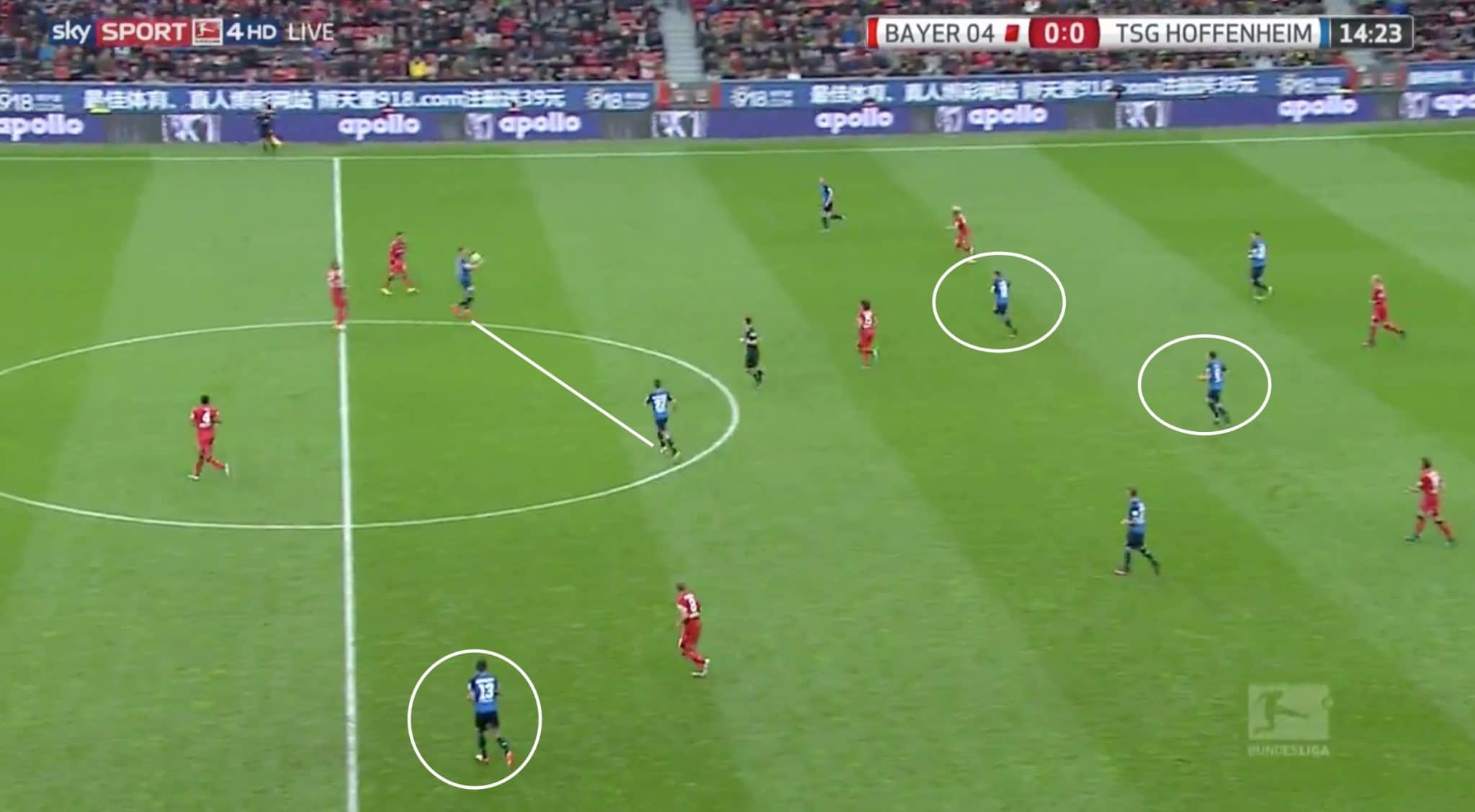 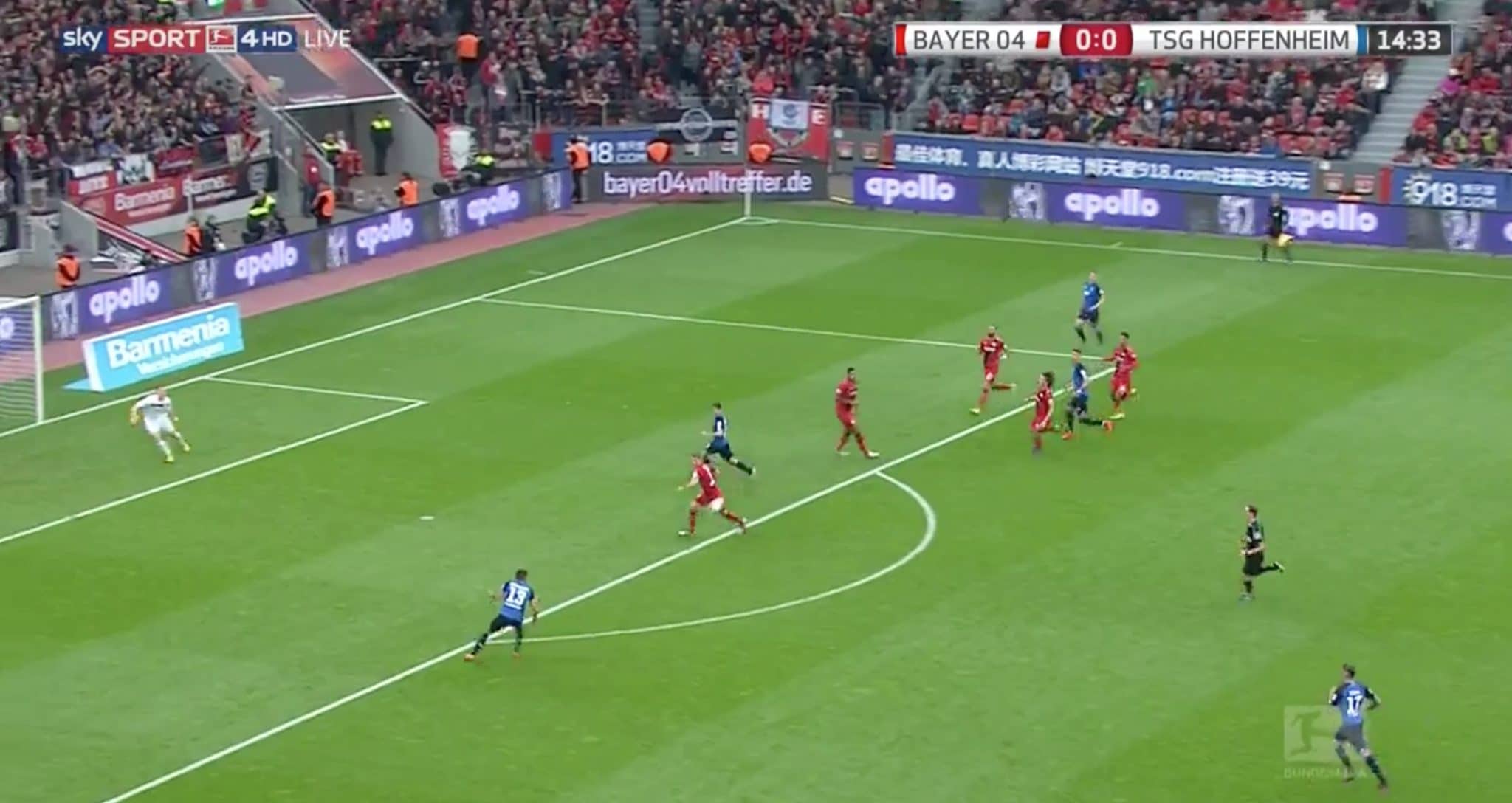 In the screenshot, taken from Hoffenheim’s 3-0 win against Bayer Leverkusen, you can see the same tactic being used. The three midfielders are once again circled and this time it’s Demirbay in the advanced position during the build up phase. In the second screenshot you can see Demirbay in space as the ball is played to him just before he dribbles into the area and fires home. 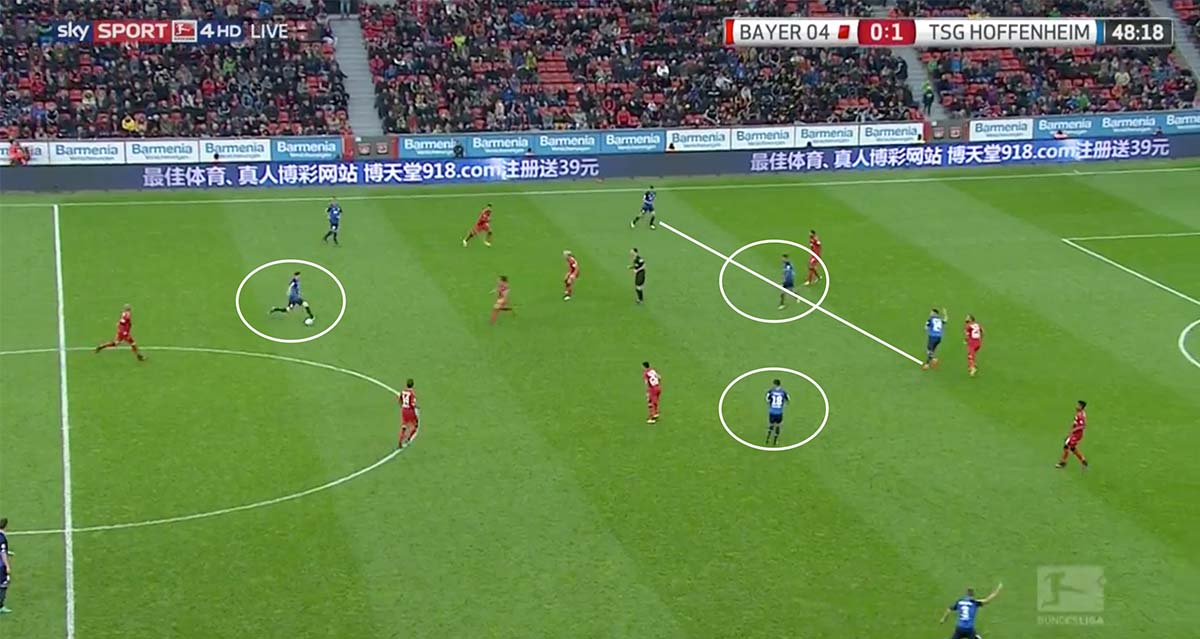 The screenshot above is the build-up prior to Hoffenheim’s second against Bayer Leverkusen. The three midfielders are circled and once again the staggered three in midfielder is obvious. Demirbay is the furthest one forward with Rudy as the deepest and Amiri the one in the middle.

Demirbay picks up an intelligent position which prevents Leverkusen centre-back Tah pushing out to Kramaric on the Leverkusen right. Rudy, in possession, plays the ball to the former Leicester striker and as play advances he plays the ball back across goal and Wagner fires home from a central position. 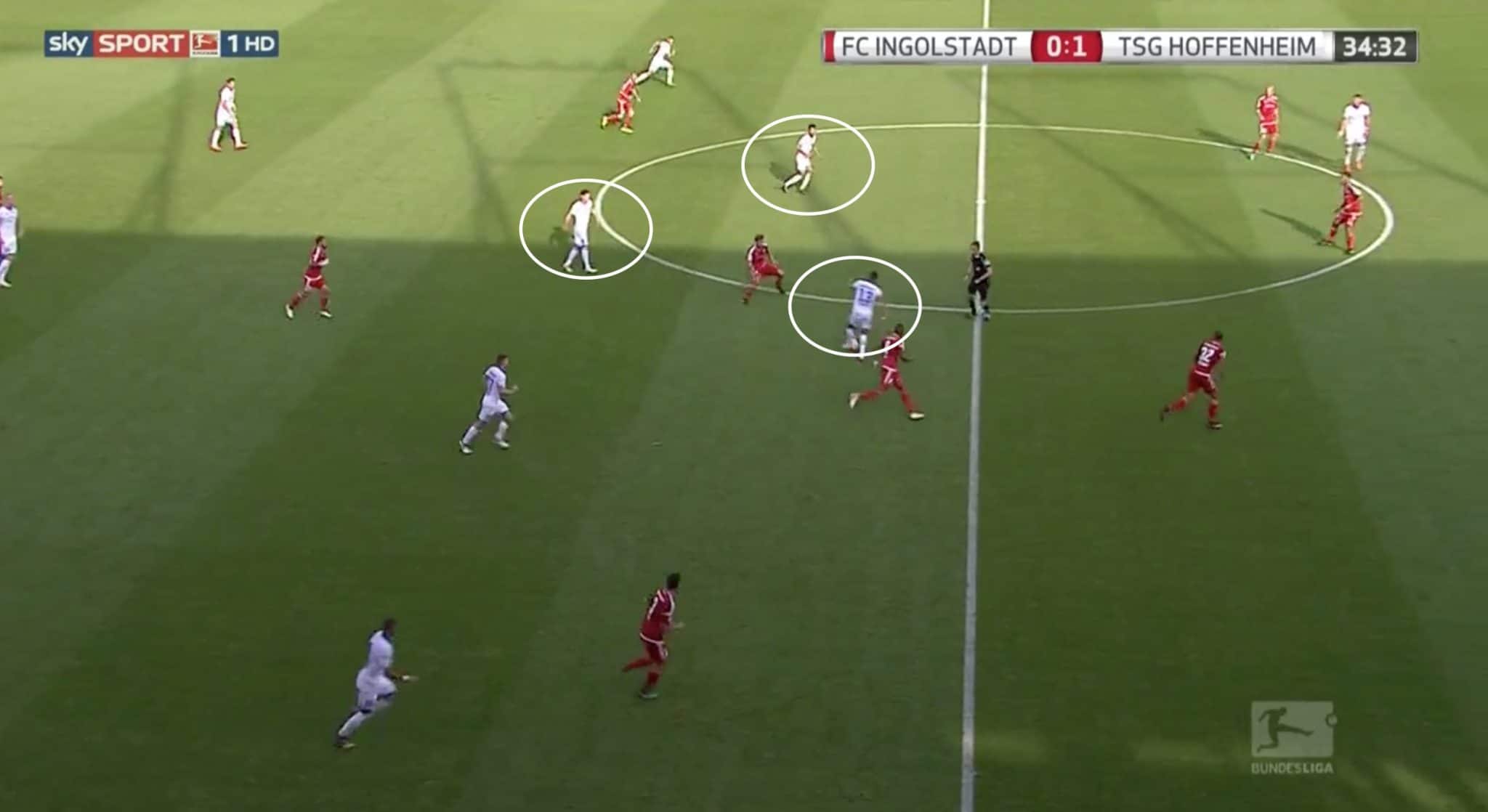 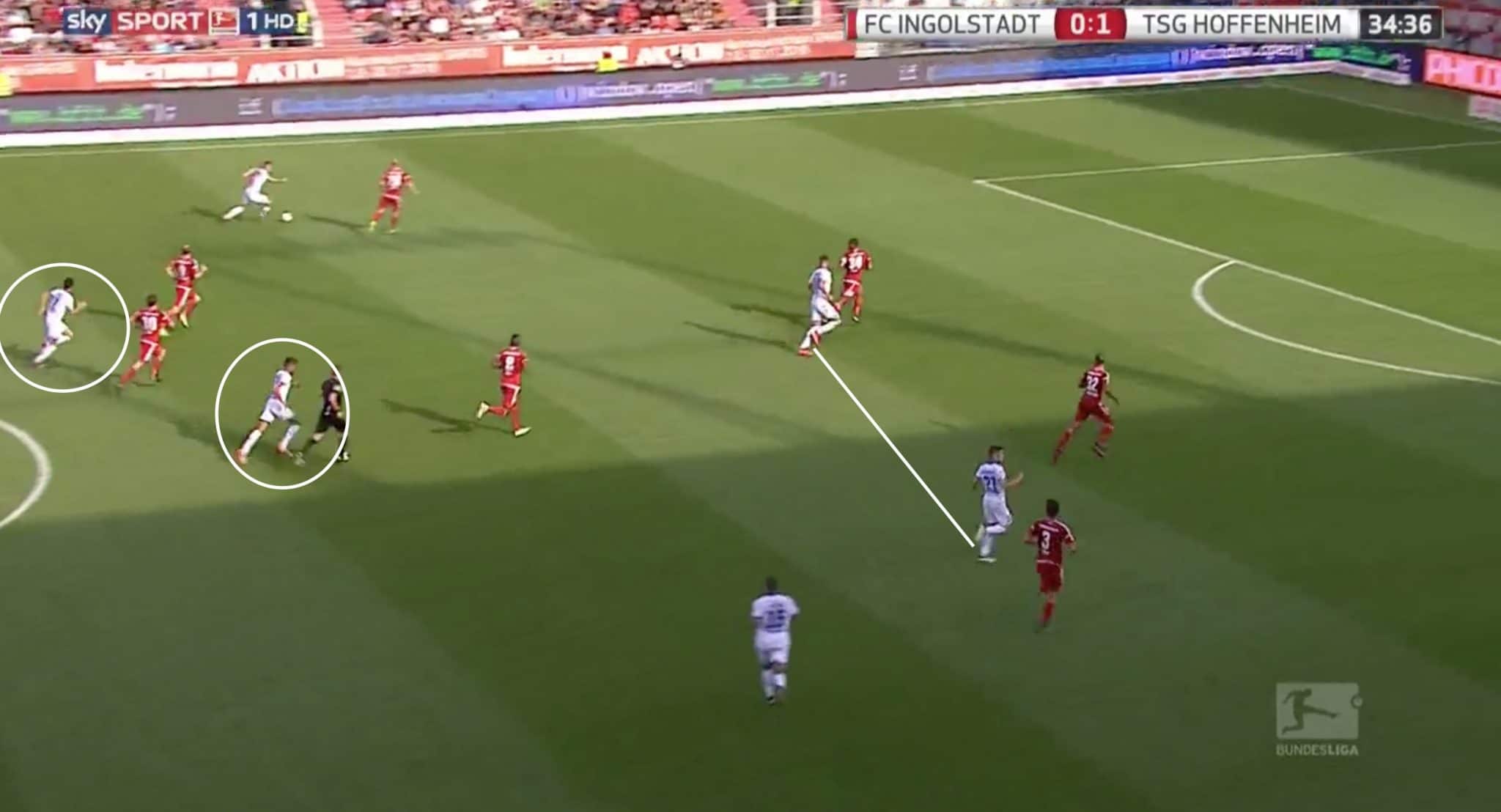 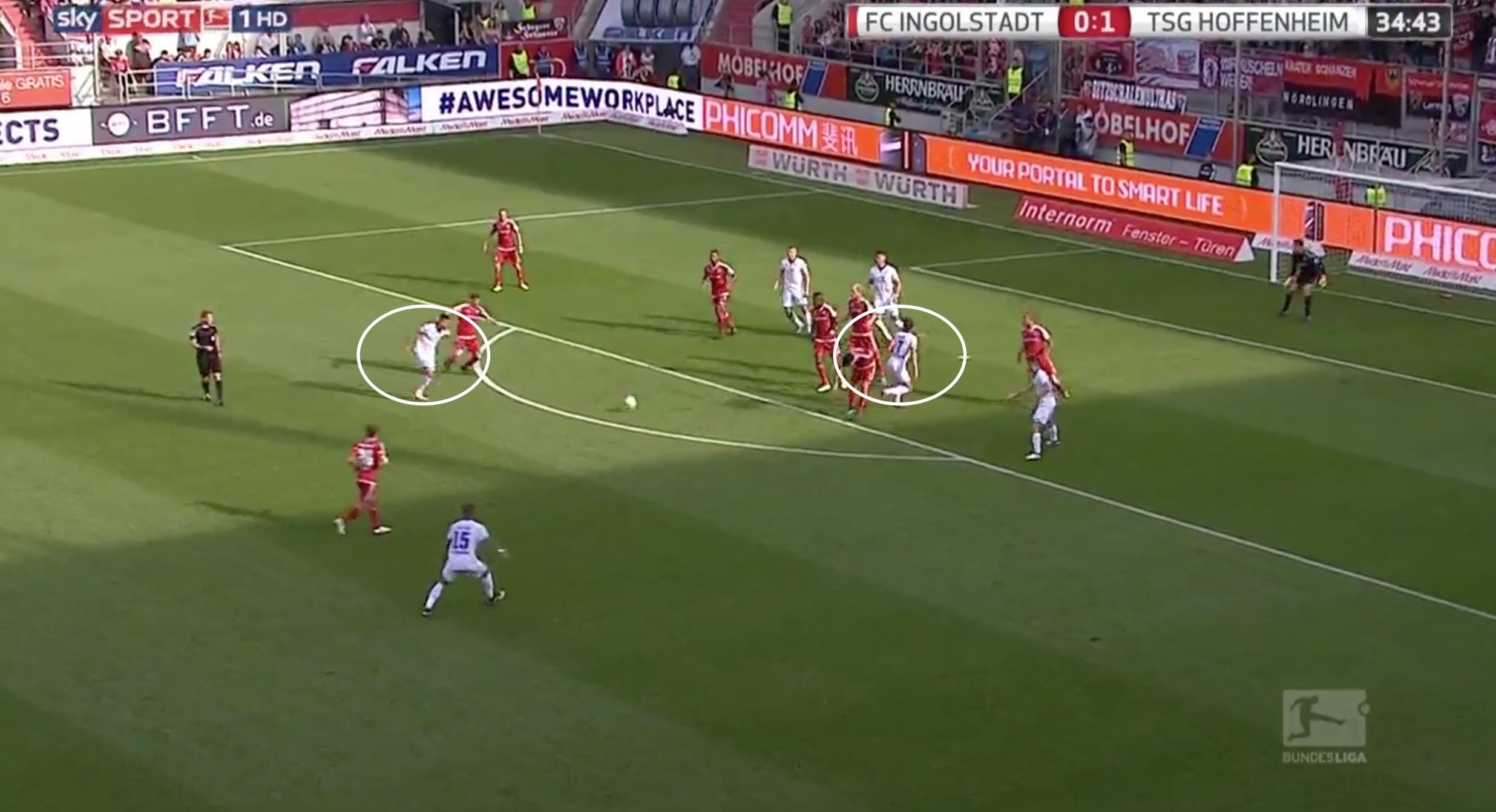 The screenshot is the build-up to the Hoffenheim second against Ingolstadt. In the first screenshot you can see the three Hoffenheim midfielders circled. The second screenshot shows Rupp and Demirbay supporting the play as Hoffenheim look to attack.

In the third screenshot you can see Rupp in the area along with the Hoffenheim strikers and the left wing-back. The midfielder drives into the area and creates space outside, which Demirbay makes the most of by firing home.

The two Hoffenheim midfielders are able to push forward and support the attacking two safe in the knowledge there’s a defensive midfielder and a back three behind them and of those four players two of them can play defence splitting passes.

So not only is there cover defensively there’s also the chance that if the opposition attempt to counter Hoffenheim are able to spring one of their own due to the ability of their defensive players.

They may have lost Sule and Rudy but they've kept the majority of the squad together and added the supremely talented Serge Gnabry to their ranks. However, the impact from losing two key players from central areas is yet to be determined and Liverpool could capitalise on this, especially with the attack Jürgen Klopp has at his disposal.

It will no doubt be an entertaining tie between the two clubs in the Champions League play-off match.