If you claimed to have called Sadio Mané's transformation into a goalscorer supreme then you’re a liar.

The 27-year-old has always been a reliable scorer, netting double figures in every season he’s played in England. But there was never the indication he'd turn into a Golden Boot winner.

After the departure of Philippe Coutinho in the January of 2018, Mané adopted a creative role for the Reds. He thrived there. His expected assists per 90 average spiked to 0.20, the highest it’s been since be moved to England, and he seemed comfortable as the club’s creator in chief.

He involved himself in a goal every 130 minutes in the Premier League with ten goals and seven assists. His goal return, however, was one every 220 minutes.

He was awarded the No.10 jersey and he was expected to fill that role on a permanent basis during the 2018/19 campaign after the Reds failed to land Nabil Fekir, or any other potential Philippe Coutinho replacement.

But Jürgen Klopp had other ideas.

The Liverpool boss, having failed to add to his attack during the summer with the exception of It was evident in the first game of the season against West Ham United.

The Brazilian returned to his roots, operating in an attacking midfield role. In theory, it played to the strengths of Mohamed Salah. With Firmino dropping off to support the midfield, the Liverpool No.11 was able to drift centrally and exploit the space.

But he wasn't the only one doing it. Mané did exactly that from the opposite flank. At times it was a diamond formation, something Klopp alluded to in a press conference in December.

Mané's 2018/19 campaign got off to a flier. He netted twice against West Ham and scored in the following game against Crystal Palace. Brighton & Hove Albion managed to blunt him but he found the back of the net again against Leicester City.

All of his goals came inside the penalty area.

He was getting into positions many associated with Salah during the previous year. It was an immediate difference to his game. Instead of being the man outside the area playing passes into the box, he was the one getting on the end of them.

When looking at Mané's stats, it becomes clear what changed. 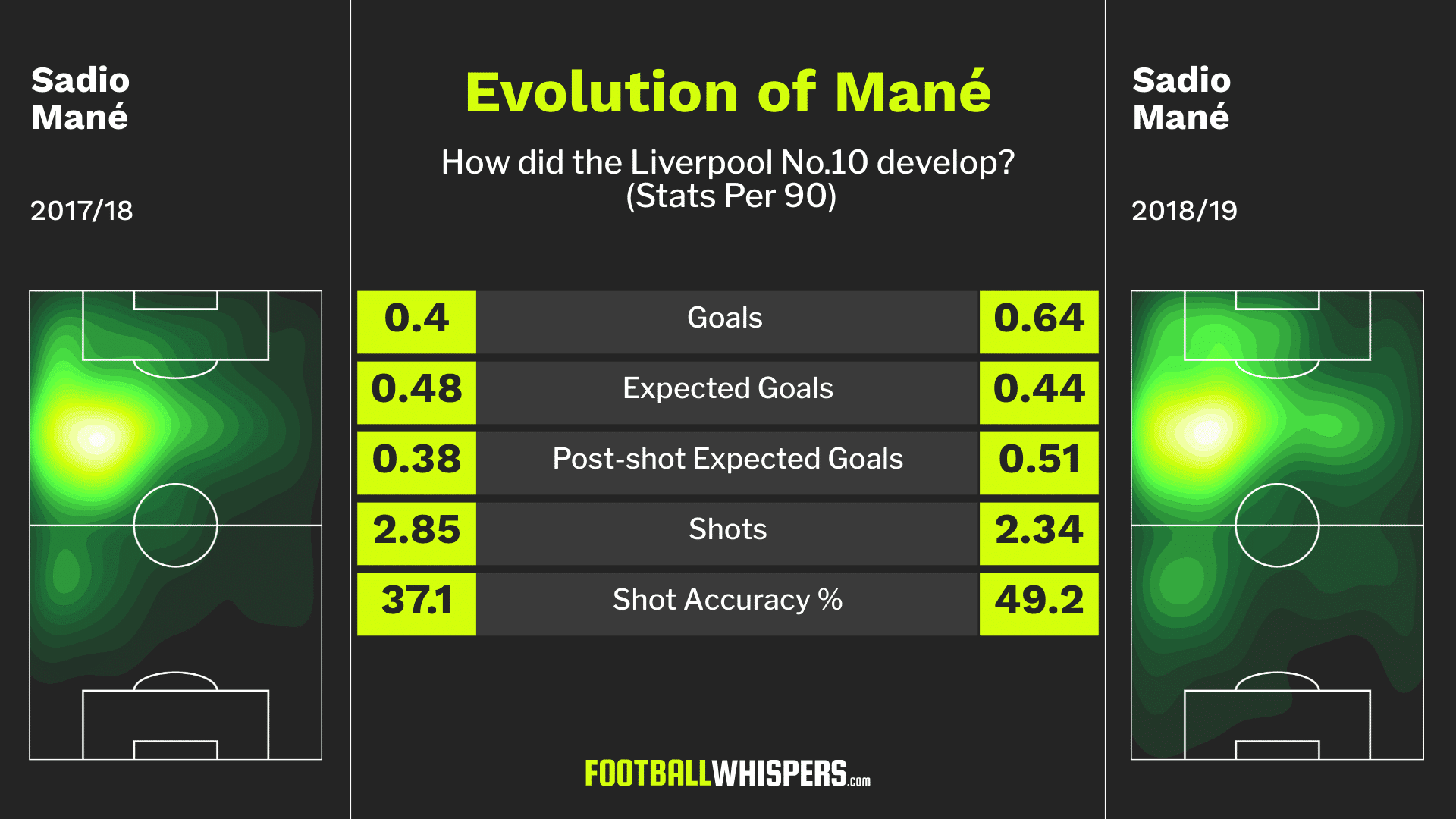 What is interesting, however, is the fact Mané's expected goals average was higher during the 2017/18 campaign. Only ever so slightly, but it is still worth noting. It shows the Liverpool No.10 was still getting into decent areas, but he was struggling to convert his chances.

But this year it's been different. The post-shot expected goals metric takes into account where the shot was taken from and where the shot lands on target. If you add value to your shots then you're finding the corners. Mané is doing just that and this explains why his post-shot average is 0.07 up on his expected goals average, while last year it was down by 0.10.

His shot accuracy also climbed, up by more than 12 per cent, while he's taking fewer of them per 90. In a nutshell, he's now frugal with his efforts and a lot more clinical. It's evident in his shot maps for the past two campaigns. 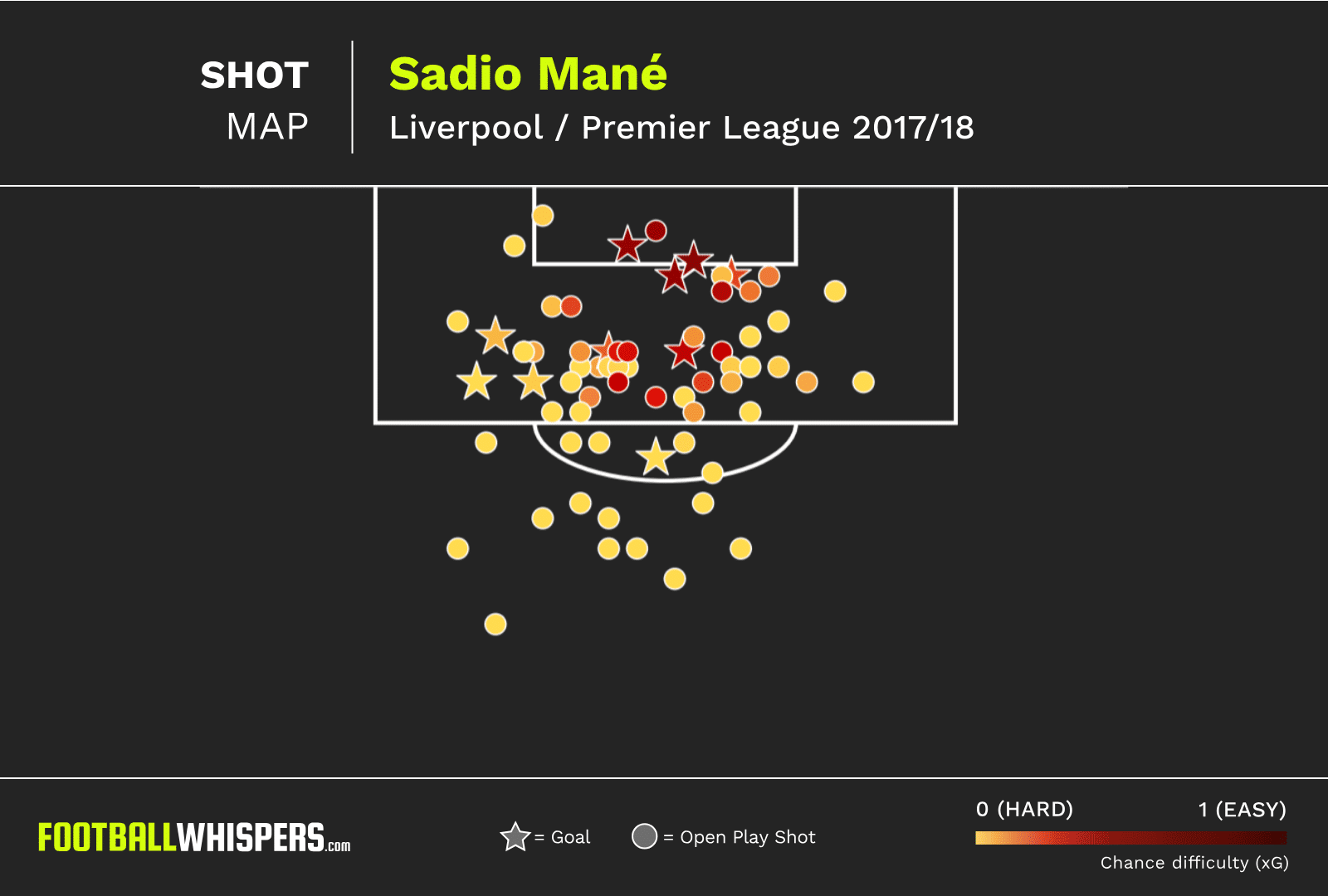 The graphic above is from the 2017/18 season. It shows Mané tried to wait until he was in the penalty area before getting shots off but he wasn't always in the optimal position. It's highlighted by the fact he had very few shots from within 12 yards of goal. 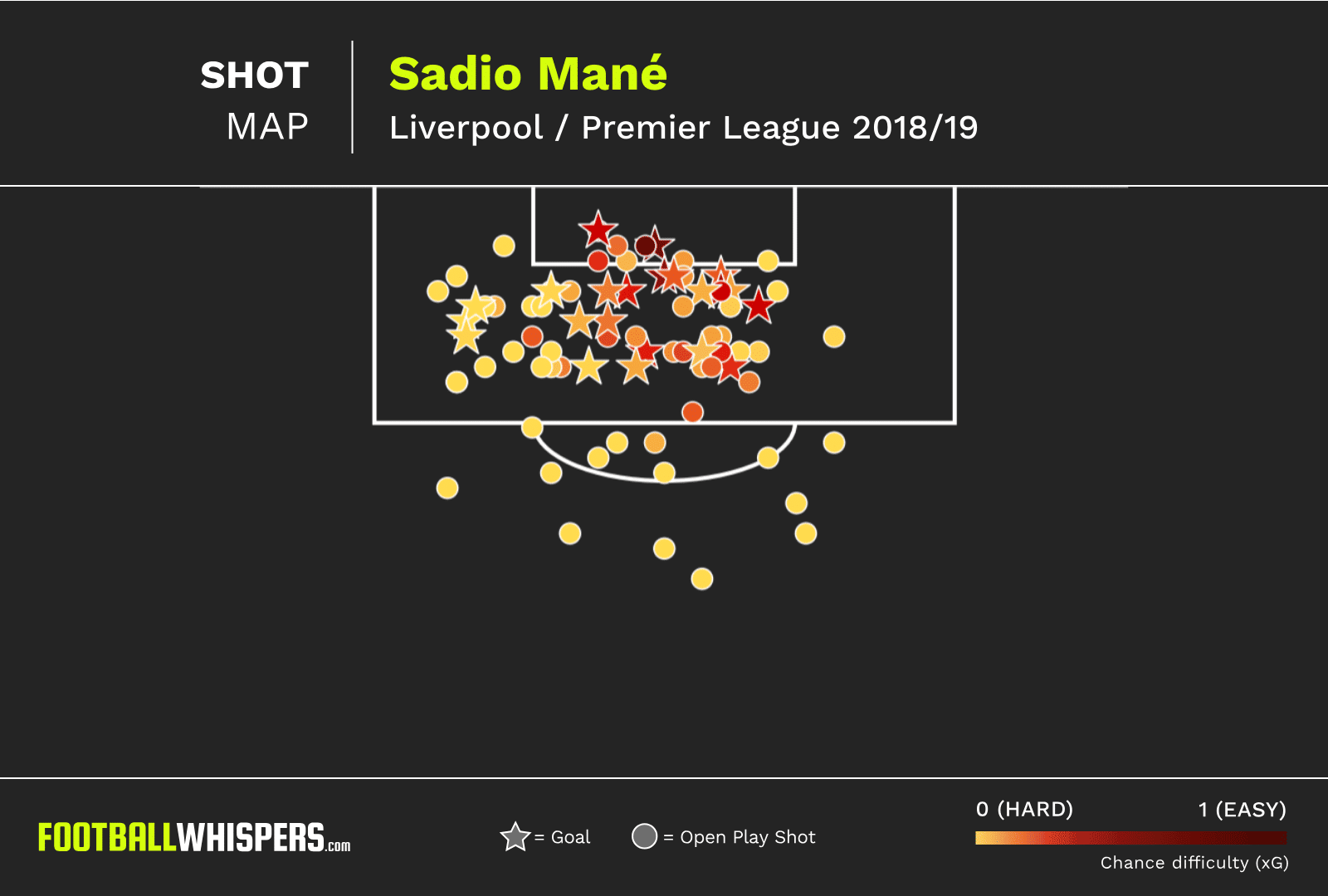 Last season he was getting closer to the goal before unleashing an effort. And it paid off for him in the form of goals, 22 of them compared to the ten he managed during the previous campaign. The minutes between goals dropped from 220 to 130.

He was still scoring chances defined as difficult but, ultimately, he was getting into positions that made the opportunities easier. Not only was this by design from a team point of view, it was also something Mané worked on. He underlined just how intelligent he is by making his opportunities more dangerous by changing the timing of his shots.

That, coupled with the value added to his efforts meant it was inevitable his goal return would dramatically improve.

The scary thing is, Mané's return is sustainable. There's no reason he couldn't put on another 20-goal show in the Premier League next season.