Given his penchant for self promotion it is quite incredible José Mourinho has not hailed the reintegration of Luke Shaw into Manchester United's starting XI as the latest example of his genius.

Then again, the Portuguese was one of the few who felt the 22-year-old was not good enough to get into his starting XI ahead of makeshift full-backs Ashley Young and Daley Blind in the last year.

Regardless, the former Southampton player's return to the side has gone under the radar. Before Saturday's 1-0 victory at Burnley, Shaw had started eight of United's last 11 games in all competitions.

Never one to pass up the chance for some hyperbole, Mourinho lavished Shaw with praise prior to dropping him for the trip to Turf Moor.

“He was already improving and playing well when I start playing him after that long spell without minutes,” the Portuguese said.

“I remember the first time, in the Champions League, he was coming step by step.

“And now with a good run of matches and continuity also, playing like he did against Everton, two days after a previous match, he's good, solid, physically much better, mentally much stronger, tactically understanding the game much better and what we need in different phases and circumstances.

“I'm really happy and [looking at the transfer market], I can say that in this moment I don't see many left-backs better than this Luke Shaw.”

It would have made a pleasant change for Shaw who is more used to being on the end of public dressing downs from Mourinho. It was following a 1-1 draw with Everton last April when the proverbial really hit the fan.

“He [Shaw] had a good performance but it was his body with my brain,” said Mourinho. “He was in front of me and I was making every decision for him.

“The communication was possible because we were very close. I was thinking for him, when to close inside, when to open, when to press the opponent, I was making every decision for him.”

Shaw, though, refused to give up on his United career. He had to show plenty of fight to come back from a horrific leg break suffered against PSV Eindhoven in the Champions League group stages in 2015.

By comparison, proving his manager wrong was small fry.

“It is my time to fight until the end of the season and show the boss what I can do and what I can bring to help his team,” Shaw said soon after.

“I remember having the meeting with him and I said to him at the end, ‘I am going to prove you wrong’ because I believe and I want to do that, not just for myself but the fans that have been behind me and sent me really nice messages and want to support me through this time.”

So how has Shaw worked his way back into Mourinho's plans? In the early weeks of the season it looked to be a forgone conclusion he would leave Old Trafford. Two Carabao Cup appearances totalling 137 minutes were all he had to show for the first three months of the campaign.

He was not even included in United's match-day squad for a Premier League game until the visit of Bournemouth on December 13. It was his first top flight start since the 1-1 draw with Swansea City on April 30.

So how does Shaw actually compare this season versus last?

From a defensive point of view he is making slightly fewer successful tackles per 90 this season. However, it is worth noting he is still winning 75 per cent of his challenges (1.2) whereas last term he won 76.1 per cent (1.6) while attempting, and therefore losing, more.

That could be explained by the fact he is making more combined blocks – comprised of shots, crosses and passes. Crucially, he is now blocking 1.6 passes per game, up on his average of 1.2 per 90 last season.

In fact, the only big drop-off is in terms of interceptions per 90, where he is making 0.2 versus 1.6 last season. 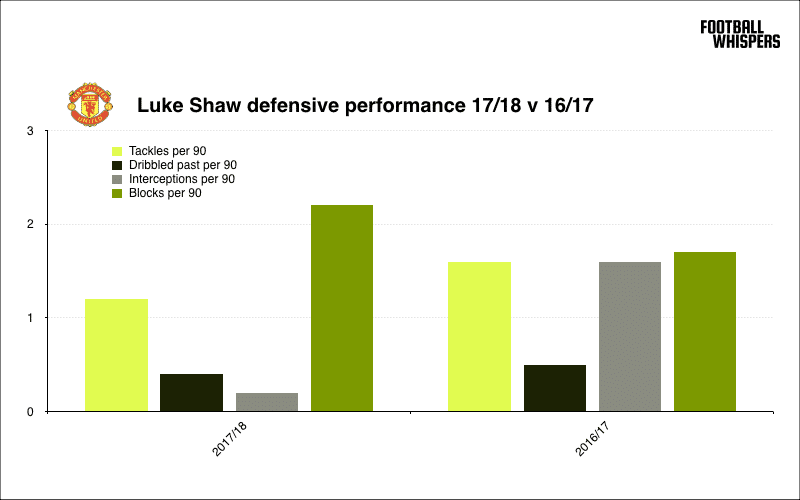 An attack-minded defender by nature, playing in a side where the full-backs are expected to get wide and high, Shaw is still contributing going forward though perhaps with more measure than last season.

His key passes per 90 have remained around the same (1.3 down to 1.2) while he is successful with 50 per cent (0.4) of the dribbles he attempts per 90. That's down on last season's figure of 66 per cent (1.2) but losing the ball when in possession is a cardinal sin for someone who preaches the discipline and structure Mourinho does. 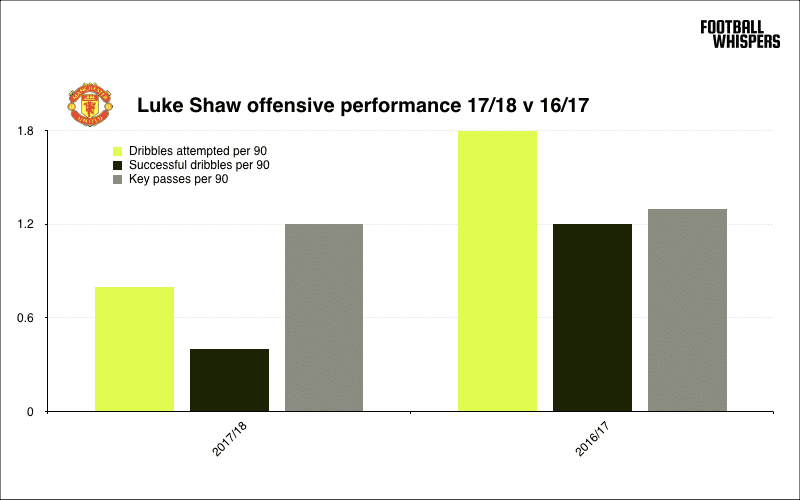 Given all now appears to be well in the relationship between Shaw and Mourinho it might be considered a surprise there is not a noticeable improvement in the defenders's numbers.

However, there are only a couple of metrics where the England international appears to have declined significantly. In most cases the difference can be attributed to taking fewer risks and generally playing safer – qualities of paramount importance in a Mourinho side.

The Portuguese is lauded for his defensive organisation and having a player who won't adhere to that, regardless of their innate talent, simply won't do.

Shaw's reintegration is complete. Just don't mention it too loudly or Mourinho will ensure we never hear the end of it.