It’s safe to say Pep Guardiola doesn't have much time for December.

Since arriving on English soil in the summer of 2016 the Spaniard has suffered 11 Premier League defeats, of which, six have been served up in what is widely acknowledged as the most wonderful time of the year.

There’s been little to raise a smile around the Etihad Stadium this Christmas, as first Crystal Palace stunned the champions 3-2 before Leicester City made it back-to-back defeats with a 2-1 triumph on Boxing Day.

Those losses made it three failures in four Premier League games for City after Chelsea claimed a 2-0 win at Stamford Bridge. From an air of invincibility to a vulnerable superpower which can be got at, City have lost their swagger.

A nine game run in all competitions without a clean sheet presents a side which has become porous at the back and the stats tell a similar story. On the back of dismissing Southampton with a 6-1 drubbing in early November, City have seen their expected goals (xG) conceded per match increase from 0.53 to 1.46.

It’s a sizeable increase, but one the City of old could have absorbed given their ability to frequently outscore opponents. However, confidence in front of goal has also been in short supply since the start of December.

After beating Bournemouth 3-1 on December 1 City have seen their xG per match drop from 2.5 to 1.46. Inevitably, flipping the stats on their head has resulted in a downturn in form and City have scored as many goals as they have conceded with six. 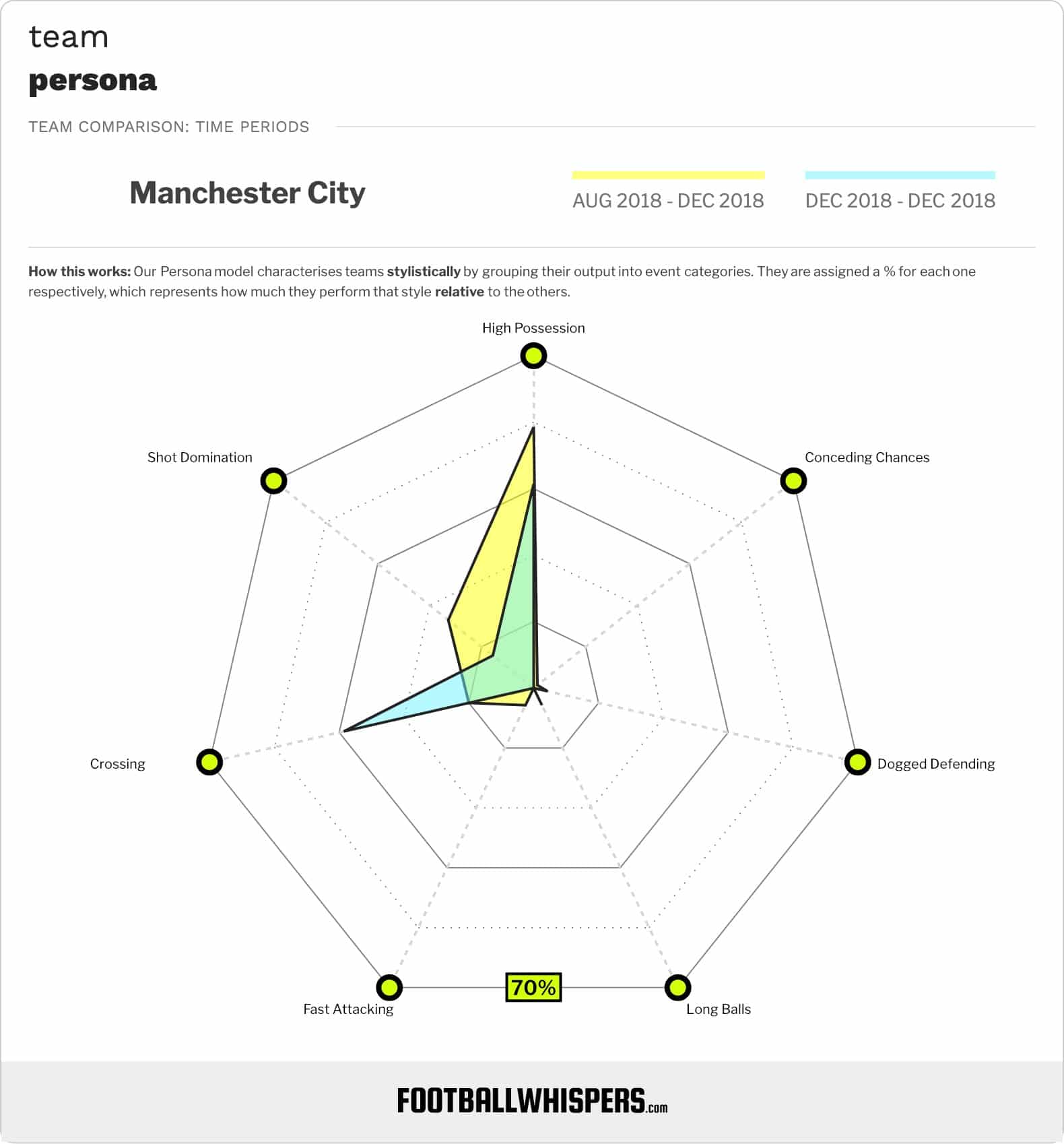 In contrast, City conceded just five goals in the 13 games prior to facing Eddie Howe’s Cherries and scored at will to find the net 40 times. A return which would put the fear in any side but one which they have not been able to maintain.

David Silva has certainly been missed in the past two games and played just the final 20 minutes of the loss at the King Power Stadium. Even at 32, Silva remains a vital cog in the City machine, as evidenced by his seven big chances created, five goals scored and two assists provided in the league this term.

Part of the problem when facing Guardiola’s side comes in trying to recover and retain possession against an insatiable press and metronomic passing style. Simply put, getting out of your defensive third against City can be a huge struggle.

That was certainly the case in the lead up to December as Guardiola’s men won possession in the attacking third 4.53 times per game (second most in the Premier League). Fast-forward to their Christmas blues, though, and City are ranked ninth with 4.33.

A small drop perhaps, but it takes on greater significance when coupled with the fact City have won possession in the middle third more times per game (34.33) than any other Premier League side since facing Bournemouth.

It’s an important stat to consider, suggesting teams are playing further up the field against the Citizens and in turn are both restricting their opponents and creating more themselves.

Much has been made of the loss of Fernandinho, who hasn’t played since the win over Everton on December 15. City have lost both league games in the wake of the Brazilian suffering injury and it is true they do worse without him in the side. Since Guardiola took over, City have won 71.3 per cent of games Fernandinho has played and just 59.3 in his absence.

John Stones, playing in an unfamiliar position, and İlkay Gündoğan have since been asked to fill the screening midfield role Fernandinho has made his own. The 33-year-old has won possession 106 times in the league this season, more than any other City player, and also chips in with 2.15 tackles and 1.55 interceptions per 90 minutes.

Gündoğan, who is a more suited replacement than Stones, can’t come near those numbers with 1.18 tackles and just 0.64 interceptions to his name per 90 minutes. Fabian Delph has also been touted as a potential Fernandinho replacement, but his red card for a reckless challenge late on against Leicester has deprived Guardiola of the England international.

All in all, the City boss, who already described the game with Leicester as a must-win, has plenty to ponder approaching the turn of the year.

If he can’t find a suitable replacement for the quietly efficient Fernandinho and rediscover the defensive solidity and attacking flair City possessed prior to December, Liverpool will be hopeful of tightening their grip on this engaging title race.

Jurgen Klopp’s men travel to the Etihad next week and, on current evidence, will fancy their chances at the home of the champions.