With a well-taken equaliser and an assist for the match-winning goal, Chelsea at Old Trafford on Sunday.

The Belgian striker, despite having scored 21 goals in 40 appearances for United since his £75million summer move from Everton, has come in for more than his share of criticism this term, with his scoring record (or lack thereof) against top-quality opposition a particular bone of contention among his detractors.

Lukaku hadn't scored in any of United's previous games against fellow top-six opposition this term, barely making an impact in most of these fixtures and missing key chances on a couple of notable occasions.

The 24-year-old's man-of-the-match display against his former club, however, should put paid to the notion that Lukaku is incapable of making his presence felt in crunch encounters.

Leading the line in United's 4-3-3 set-up, Lukaku was not firing on all cylinders for the entire 90 minutes, involved minimally in the first half an hour as Chelsea took the initiative.

But the Red Devils' No.9 found his feet as the half drew to a close, beginning to link effectively with Anthony Martial and Alexis Sánchez, who offered support from the flanks. And it was the trio who combined to devastating effect to draw United level with Lukaku feeding Sánchez on the edge of the box. The Chilean then played the ball through to Martial for the Frenchman to expertly assist Lukaku.

It was the kind of slick interplay United fans have been dreaming of ever since Sánchez's Old Trafford arrival, and precisely what José Mourinho's men have too often lacked when up against stubborn defences.

What's more, the move also resulted in Lukaku receiving the level of service he is usually starved of in games against top opposition, when United tend to be more occupied with defensive solidity that offensive fluidity.

And therein lies much of the issue with regards to Lukaku's big-game record: it's as much a matter of the Belgian receiving inadequate service as any particular failing on his behalf. As he showed against Chelsea, he is capable of calmly converting versus top opposition if the chances arrive.

Lukaku's performance against the Blues was about much more than just his goal, however, as he once again exhibited ever-improving link play and impressive endeavour in his defensive duties.

Success breeds confidence, too; Lukaku's 39th-minute strike seemed to relax the former Everton striker, who appeared visibly less tense and more at ease on the ball than previously.

Throughout his time at United, his commitment and desire have been unquestionable. But it was perhaps his confidence level, more than anything else,  that drove him on to assist Jesse Lingard's winner on 75 minutes. 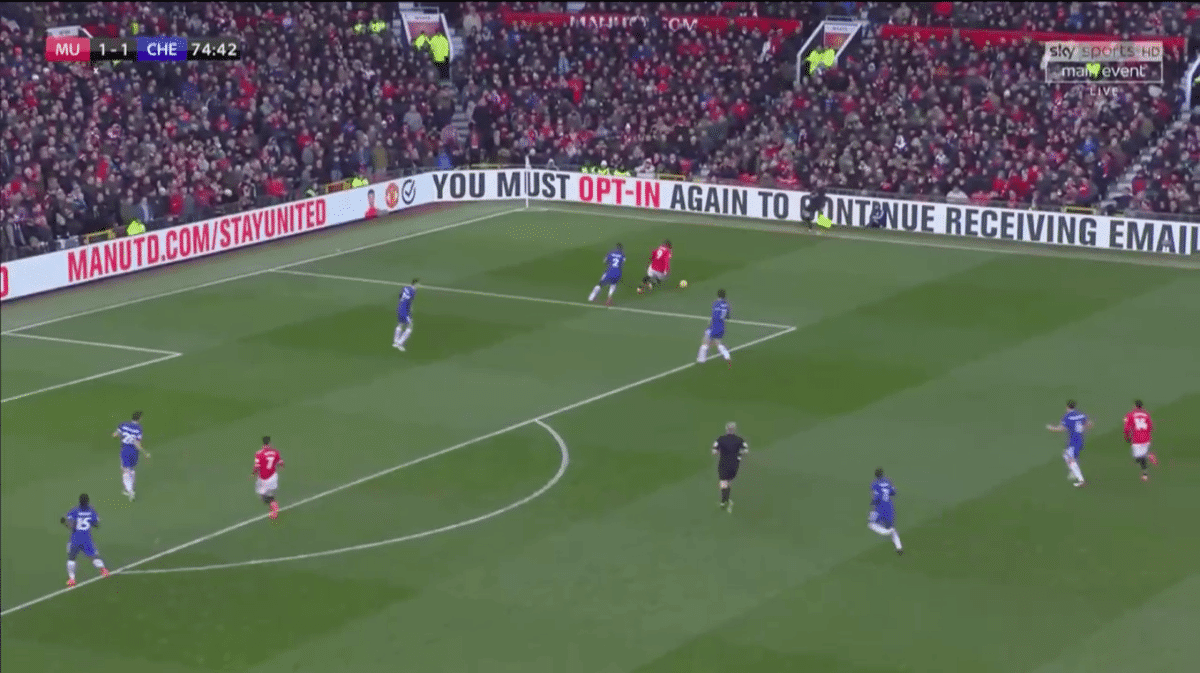 Collecting the ball in the right-hand channel, Lukaku, with his back to goal and under pressure from Chelsea centre-back Antonio Rüdiger, could have taken the easy option of simply holding the ball up in the corner, playing for time and looking for a throw-in or corner off his marker's shins. 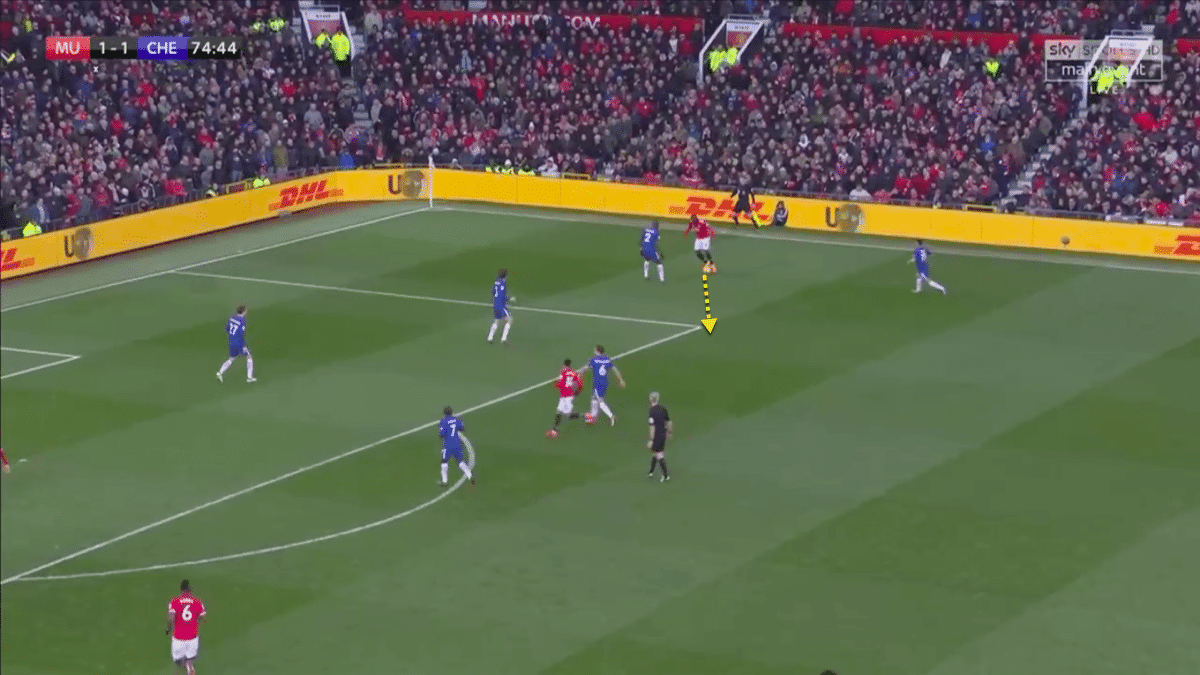 Instead he turned to face Rüdiger, signalling an intent to take his adversary on and threaten goal. This was the mark of a player emboldened by newfound confidence, eschewing the path of least resistance in favour of the riskier yet potentially more lucrative option. 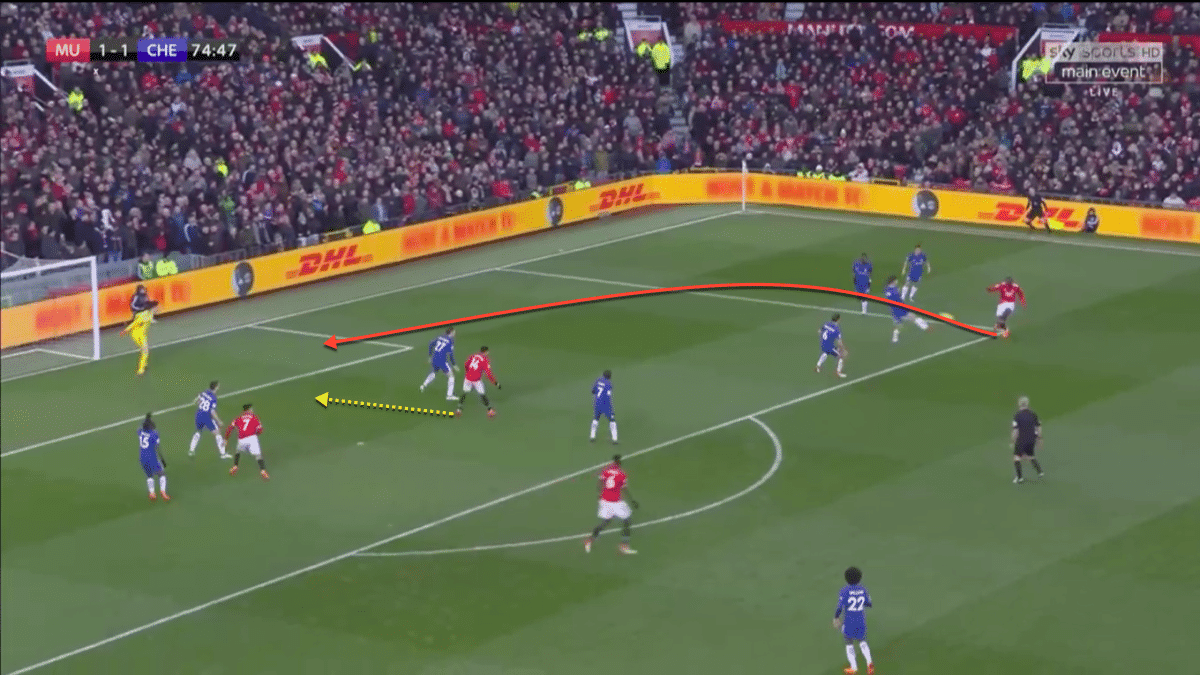 After bursting away from Rüdiger and working the ball onto his stronger left foot, Lukaku, not for the first time this season, swung an excellent centre into the box, perfectly meeting the run of Lingard who headed home to seal a vital three points in the top-four race.

There was also a refreshing directness to Lukaku's play, pointing to his desire to showcase his talents and become a difference-maker for United, rather than focus of efficiently completing simple, low-risk tasks. 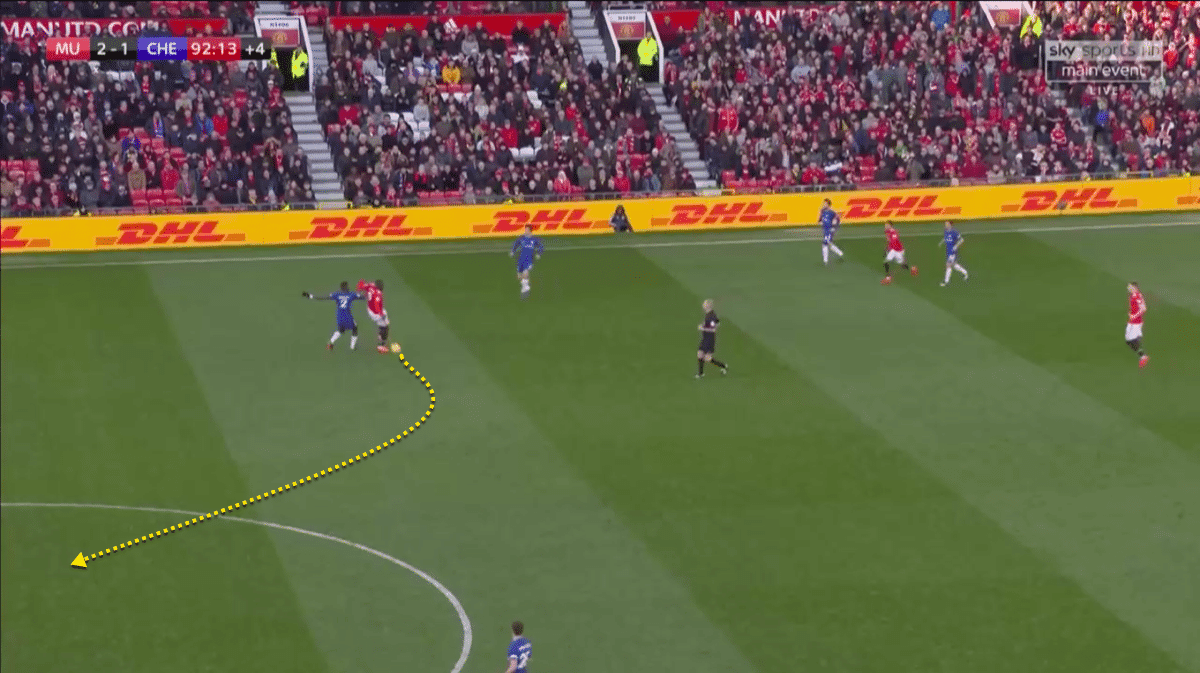 This was most evident in his stoppage-time burst deep into Chelsea territory. As we see above, when Lukaku received the ball in the United half he had a “safe” passing option to pass back to Scott McTominay. Instead he opted to turn away from the close attention Rüdiger was paying him and break into the open space in midfield. 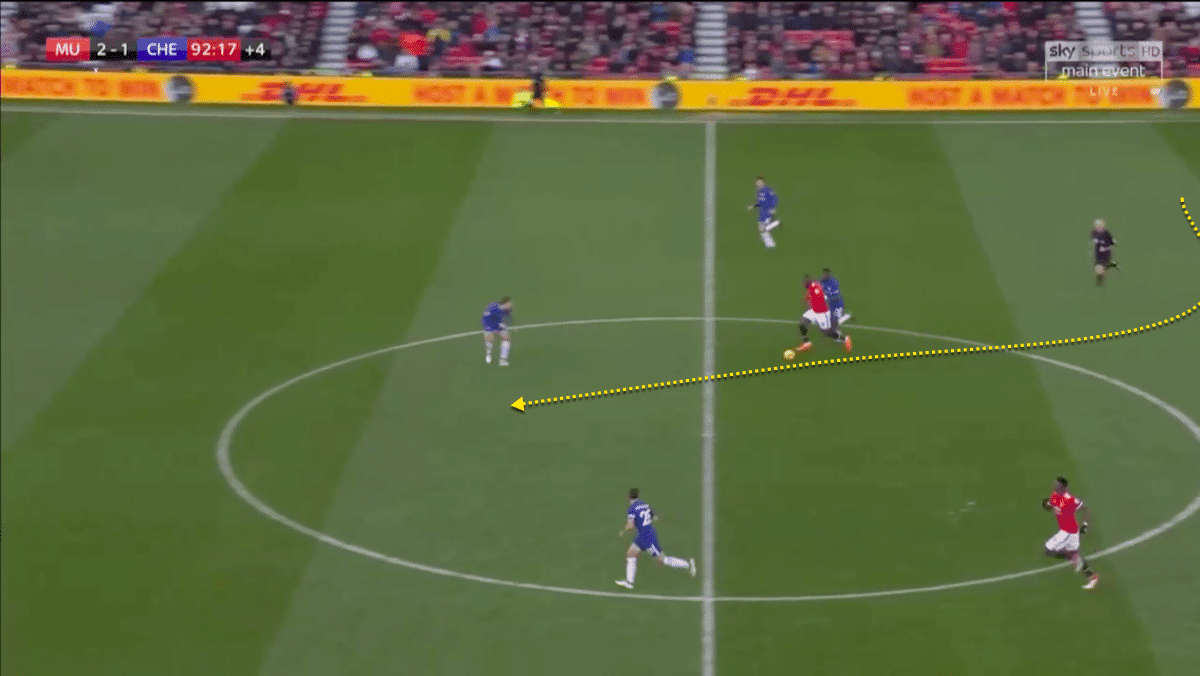 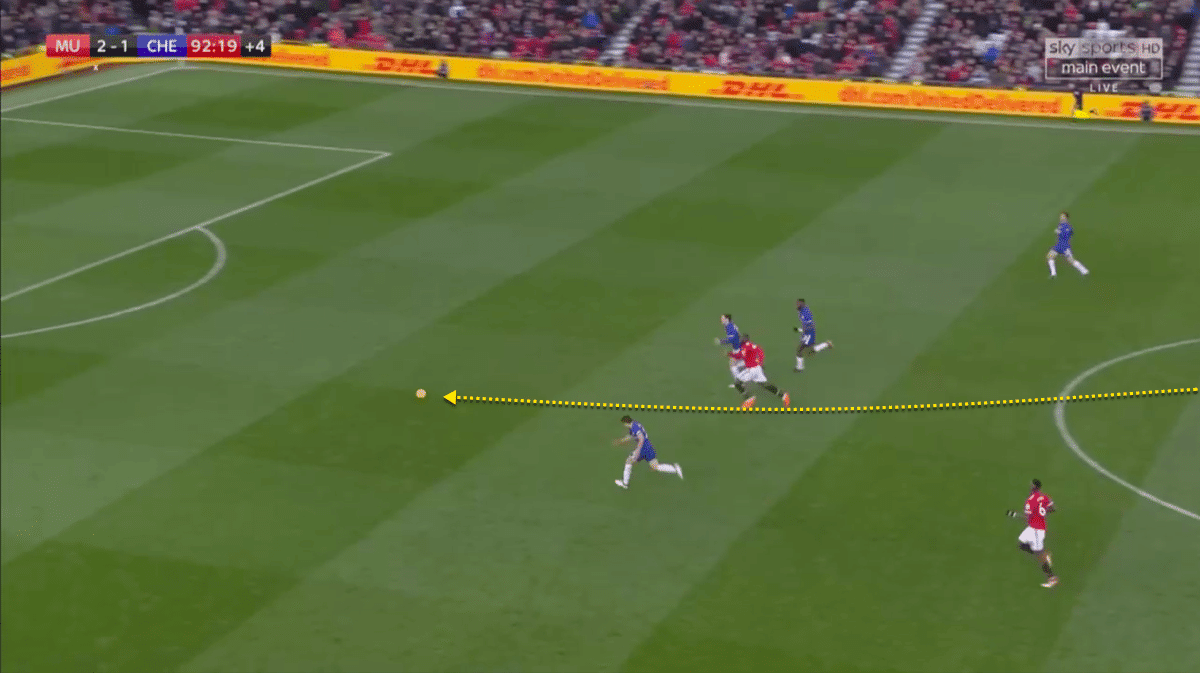 After beating Rüdiger for pace, Lukaku was then confronted by César Azpilicueta and Andreas Christensen. As the United striker knocked the ball between the two Chelsea defenders, he appears third-favourite to get to it first. 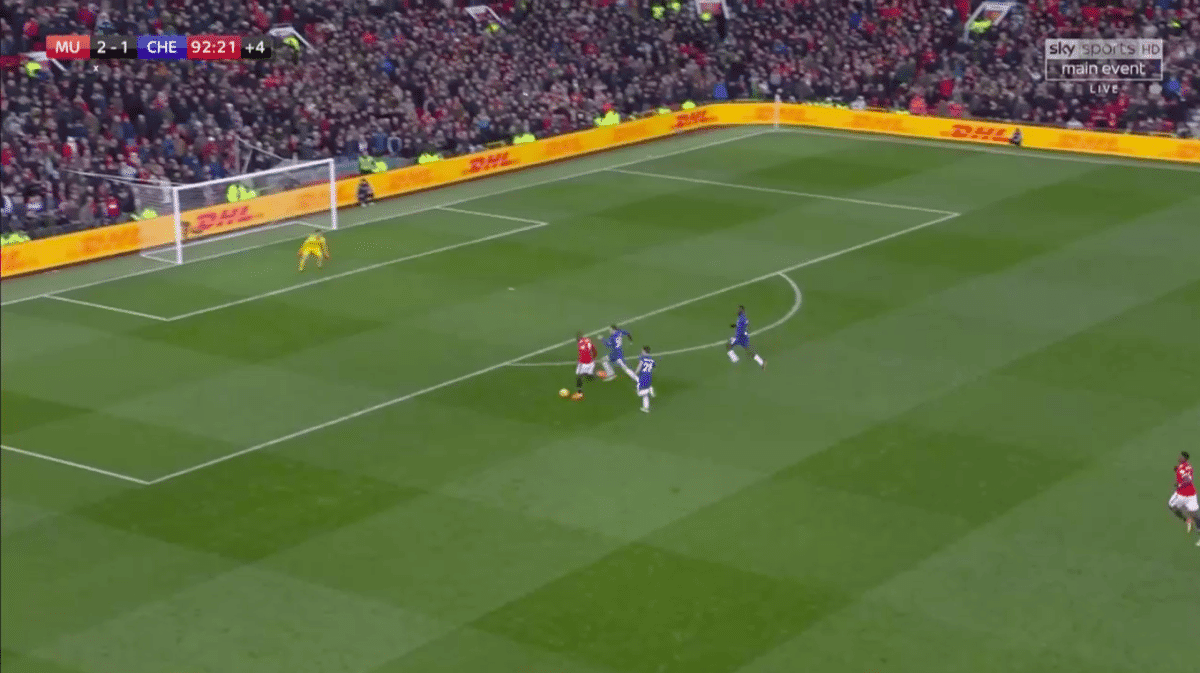 But the Belgian's power, pace and persistence ensured he beat the retreating defenders to the ball. His subsequent shot was blocked but, territorially, he had progressed his side 60 yards up the pitch when they were defending narrow lead in the dying embers of the game.

If any further evidence were needed of how Lukaku's confidence informed his standout performance, the acrobatic volleyed attempt he took in the 67th minute, with the game tied at 1-1, spoke volumes. 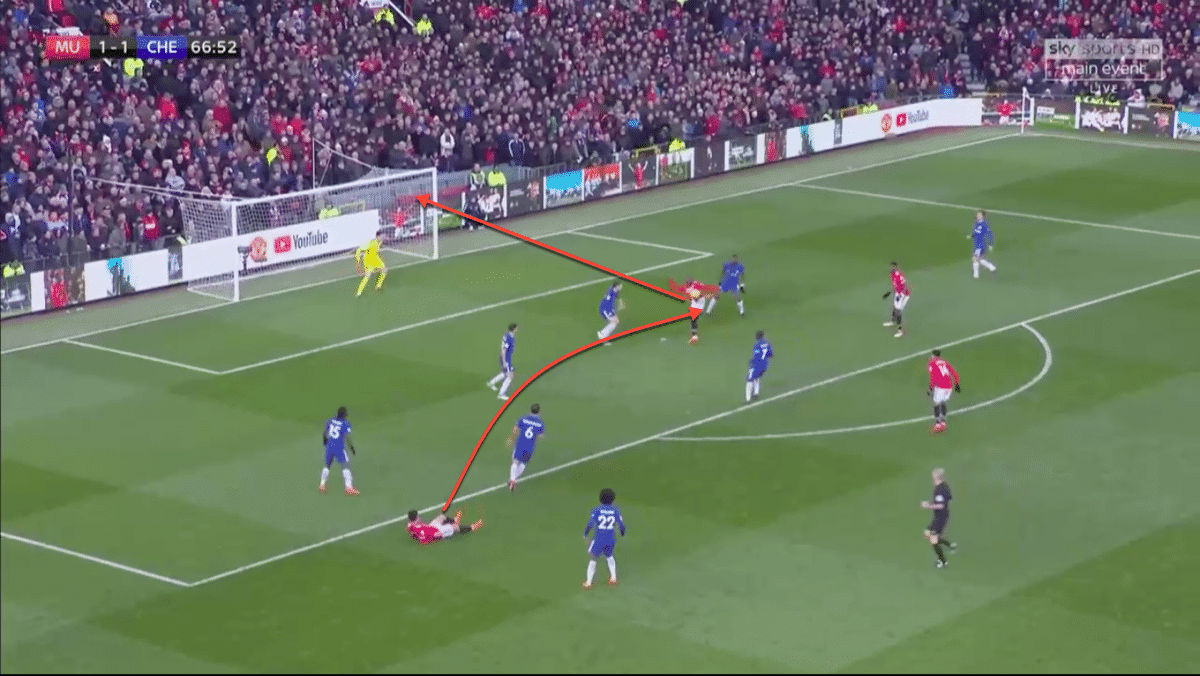 As Sánchez lifted a hopeful ball into the centre of the penalty area, Lukaku, surrounded by blue shirts, decided against either bringing the ball down on his chest or making a first-time layoff to Paul Pogba or Lingard, and fired an acrobatic volley at goal which demanded a top-drawer save from Chelsea goalkeeper Thibaut Courtois.

Had he not scored earlier in the game, and were he not riding the momentum he was building, the United striker would almost certainly have deemed such an effort improbable.

One game may not do much to mute his most ardent critics, but Lukaku showed against Chelsea that he can influence the biggest games. When confident and in form, there are few better strikers in the Premier League, no matter the opposition.