Leicester City find themselves in a strange situation heading into the new Premier League season.

They’ve banked close to £85million for a player that cost them £12million just two years ago. However, with just four days of the transfer window remaining, getting value for money as they search to replace Harry Maguire isn’t going to be easy.

The Foxes could opt to give Çağlar Söyüncü and Filip Benković a chance in the starting XI but recent reports suggest Brendan Rodgers wants to use part of the windfall received from Maguire's sale to Manchester United to strengthen his backline.

Bournemouth centre-back Nathan Aké was supposedly a target but the £75million valuation placed on him has put Leicester off. There have been claims that Rodgers would raid former club to Celtic for Kristoffer Ajer, a £15million-rated target.

The 21-year-old has clear potential, but with Leicester one of the favourites to gatecrash the Premier League top six, the Foxes may decide a defender with a little more experience is required.

So how do Leicester go about replacing Maguire? A dominant force in the air and a progressive player with the ball at his feet, the England international carved out a niche for himself. But the void is one that can be filled if the incoming player ticks the right boxes.

Firstly, not only do they have to be used to competing in plenty of aerial duels, they have to win the majority of them.

Maguire won 4.09 per 90 last season from the 5.3 he challenged for. Tackles and interceptions aren’t something to particularly read into as these stats hinge on how busy a defender is, not on how good they actually are.

A Leicester centre-back does need to be composed on the ball and used to seeing a lot of it. Maguire attempted, on average, 60 passes per 90 during the 2018/19 campaign with 39 per cent of those going forward. It highlights how progressive a passer he is.

To find the perfect replacement for the latest Manchester United signing, we’ve taken a look at the four names being linked with a switch to the King Power Stadium to assess which of the quartet should be a top target for Rodgers and the recruitment team. 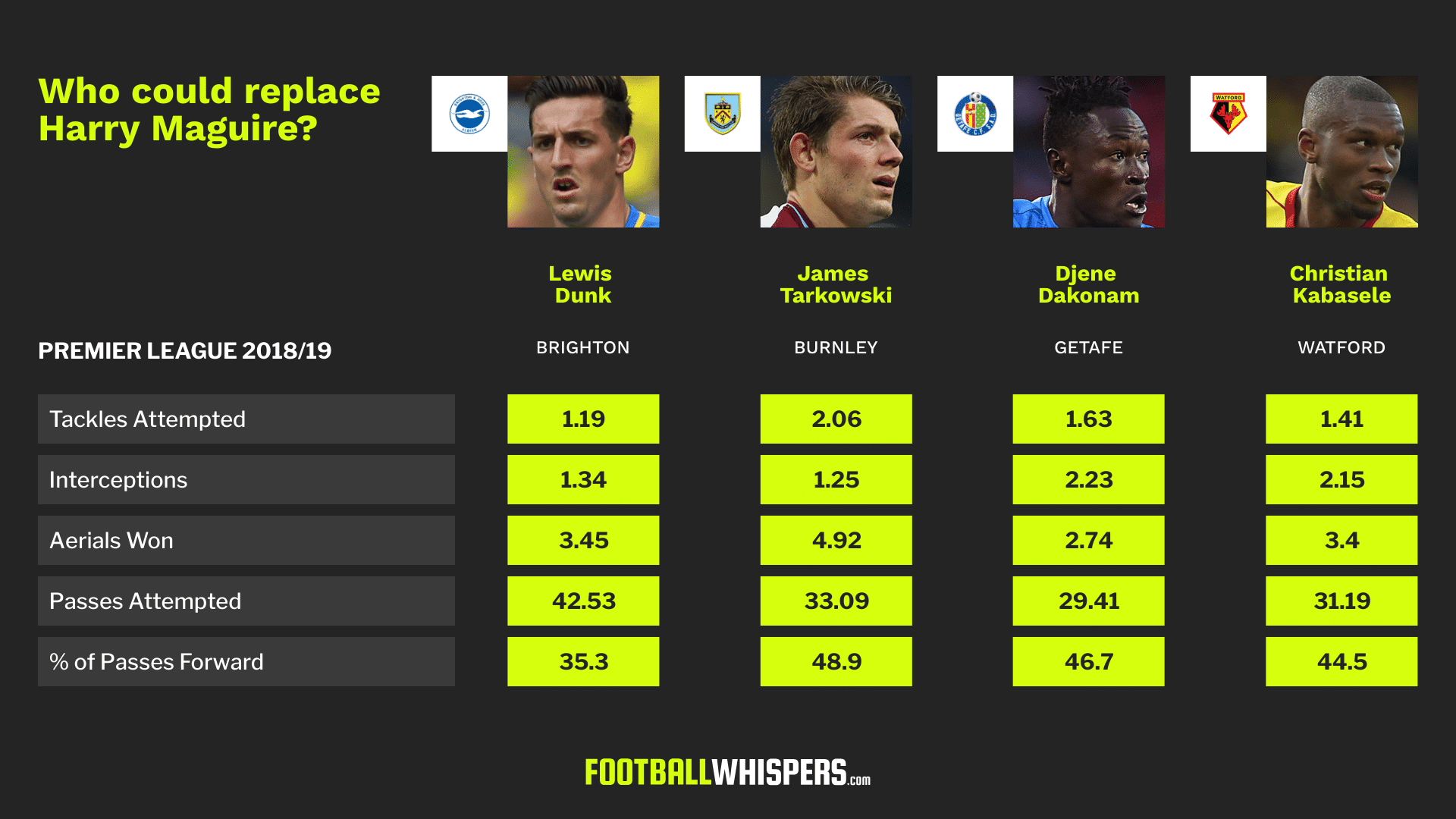 Lewis Dunk and James Tarkowski are understood to be the leading candidates on the Foxes' shortlist.

There's nothing deceptive about the two England internationals. They're both physical, both win over 70 per cent of their aerial duels, and both are fairly active when it comes to tackles and interceptions.

However, neither play for a side as dominant in possession as Leicester. Dunk averages just over 40 passes per 90 while Tarkowski comes in at 33, way below Maguire's average of 60.

However, both are progressive in the sense they look to get the ball forward. Dunk, on average, plays 35.3 per cent of his passes forward while the Burnley man plays close to half of his forward.

The systems they're deployed in plays a part, though. Tarkowski and Burnley sit deep and then look to use their target men; it makes sense that a large percentage of his passes are aimed upfield.

Ball retention in the defensive third isn't required by Sean Dyche, so the lingering question is whether Tarkowski can adapt to seeing more of the ball and picking his passes a little better.

It wouldn't be an issue if Rodgers wanted to use Tarkowski as a stopper and put more emphasis on Jonny Evans' ball-playing ability but that, too, is a risk.

Djene Dakonam, meanwhile, was linked to Arsenal earlier in the window, but the Gunners refused to pay his rumoured £30million release clause.

The 27-year-old was one of the star performers for surprise package Getafe and his form warrants a move to a bigger club. However, like with Tarkowski, Dakonam isn't used to playing in a side that builds from the back.

In LaLiga, he attempted to get the ball forward to his attackers as quickly as possible. Leicester aren't averse to this – Jamie Vardy is an excellent out-ball – but under Rodgers they do like to build from the defensive third with the centre-backs used almost as midfielders.

Dakonam isn't used to competing for many aerial duels either and would have to improve on his 50 per cent win rate in the air. He's an intriguing project but perhaps not one for Leicester right now.

Christian Kabasele, meanwhile, is a player with the traits to be one of the standout centre-backs in the Premier League. He's quick, he's proactive and he reads the game well. At 28 he's experienced enough to settle quickly but there's still scope for him to improve.

He wins over 65 per cent of his aerial duels and plays 44 per cent of his 31 passes forward. He's not perfect but the potential is there for him to be a handy asset for a Rodgers defence.

The issue is whether or not Watford would sell to a team they consider to be a rival?

There's an argument to be made for the three already plying their trade in the Premier League and the project at the King Power is enough to tempt them all away from their respective clubs.

The safer bet of those mentioned is probably Tarkowski. Not only do his stats impress he also shares a lot of similarities with Maguire stylistically.