Playing at the Camp Nou against Barcelona always evokes special memories for Atletico Madrid's star midfielder, Koke. After all, it was the venue where he made his debut seven years ago.

Fast forward to 2016, and the Spaniard has unquestionably developed into one of the finest midfielders in Europe. But the significance of the Barca-Atleti rivalry has not dimmed since his bow: the clash of two of European football's giants seemingly getting bigger every time they meet.

Ever since Diego Simeone took over the managerial reigns at the Vicente Calderón in December 2011, he has overseen a rapid progression which has built Madrid's ‘second club' grow into one of the finest, hungriest, most competitive teams on the continent.

Speaking ahead of last week's (21 September) 1-1 draw at the Camp Nou, Koke's passion and desperation to do well in the fixture was evident. He said: “We need all the enthusiasm in the world to bring back three points.

“It is a very difficult game against one of the best teams in the world, but we have the desire to compete and win there.”

Although Los Rojiblancos could only manage a draw with Luis Enrique's men, Koke's leadership, fighting spirit – he was cautioned for a kick out at Lionel Messi – and technical qualities saw him play an integral role throughout. 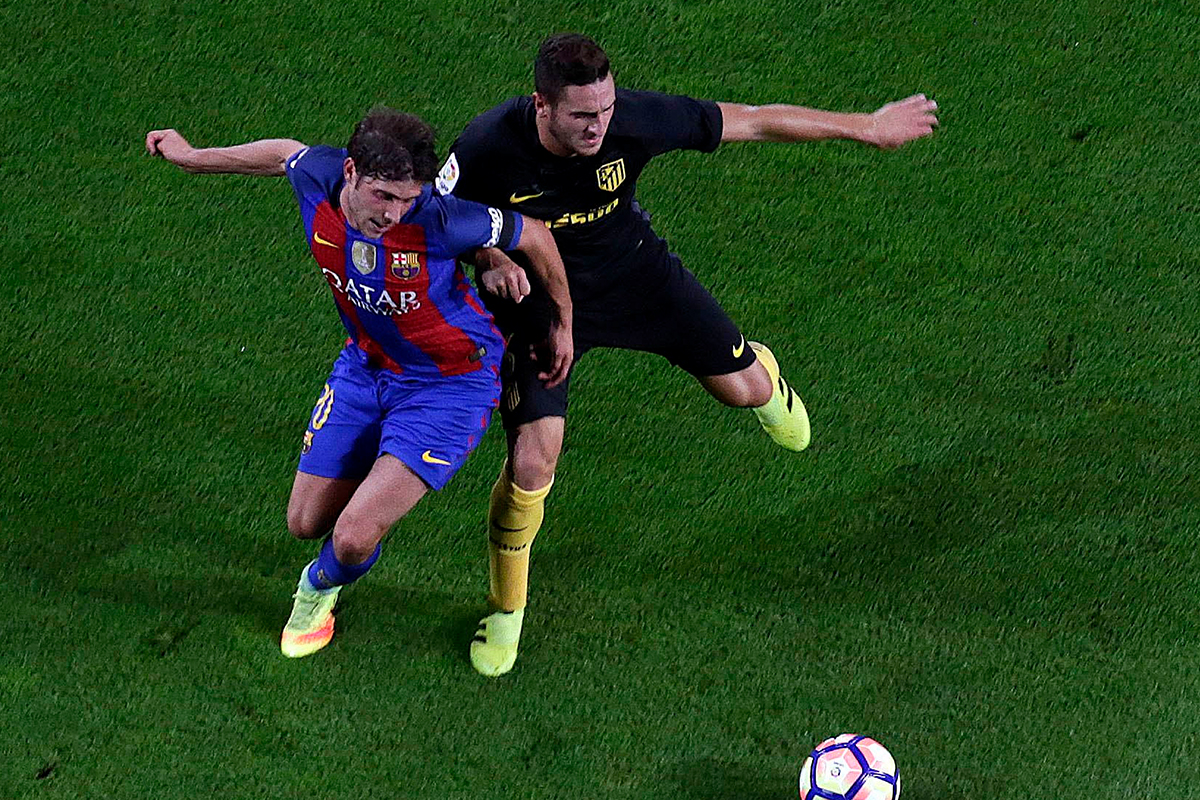 With the hosts enjoying the lion's share of possession, as is the norm, Koke and his team-mates certainly had their work cut out to blunt Barcelona's wildly gifted attack – including the prolific ‘MSN' trio (Messi, Luis Suarez, Neymar).

Koke unquestionably stepped up to the plate, in a match where he set the tone beautifully for his team-mates to follow. A courageous block of a Messi shot inside four minutes sent an emphatic early statement of intent from the 24-year-old. Thereafter, his constant cajoling and encouragement of colleagues, such as the younger Saul Niguez – who to mark, where best to position themselves, when to press or when to perform a marking crossover – saw him act as a key figurehead in their defensive exertions.

His duel with Barca's right-sided central midfielder, Ivan Rakitic, served as a fascinating subplot. From his left-central midfield station, Koke did a sterling job in marking the Croatian. With Messi frequently venturing infield from the left, Koke and left-back Filipe Luis' almost telepathic relationship, forged over many years together at Atleti, saw them deal superbly with the slick switches between Rakitic and Messi; always getting their marking interchanges spot on.

Putting in such a authoritative and domineering defensive shift saw the Spanish international act almost as an extension of his boss, Simeone, out on the pitch. Such concentration, focus and discipline, combined with a tremendous capacity to read the play, undoubtedly makes Koke an ideal fit for such a role.

Speaking of his admiration for Simeone's dogged ‘Cholismo’ philosophy, Koke told GQ Magazine last year: “It [Cholismo] is a way of life at this club, a philosophy of living certain moments in your life.

“Simeone and I need each other. He needs me on the pitch and off it he is my coach. I’m very happy he is with us and is staying for many more years.”

Although Atletico only enjoyed 30% of possession in last week's clash at Barca, Koke still managed to put his mark on the offensive stats. The quick thinking midfielder's exquisite range of passing and imaginative vision enabled him to set up an impressive three clear cut chances for his side. He was especially damaging in the second half where he really began to dictate his team's passing moves, adding a greater degree of energy and incision to Los Colchoneros. 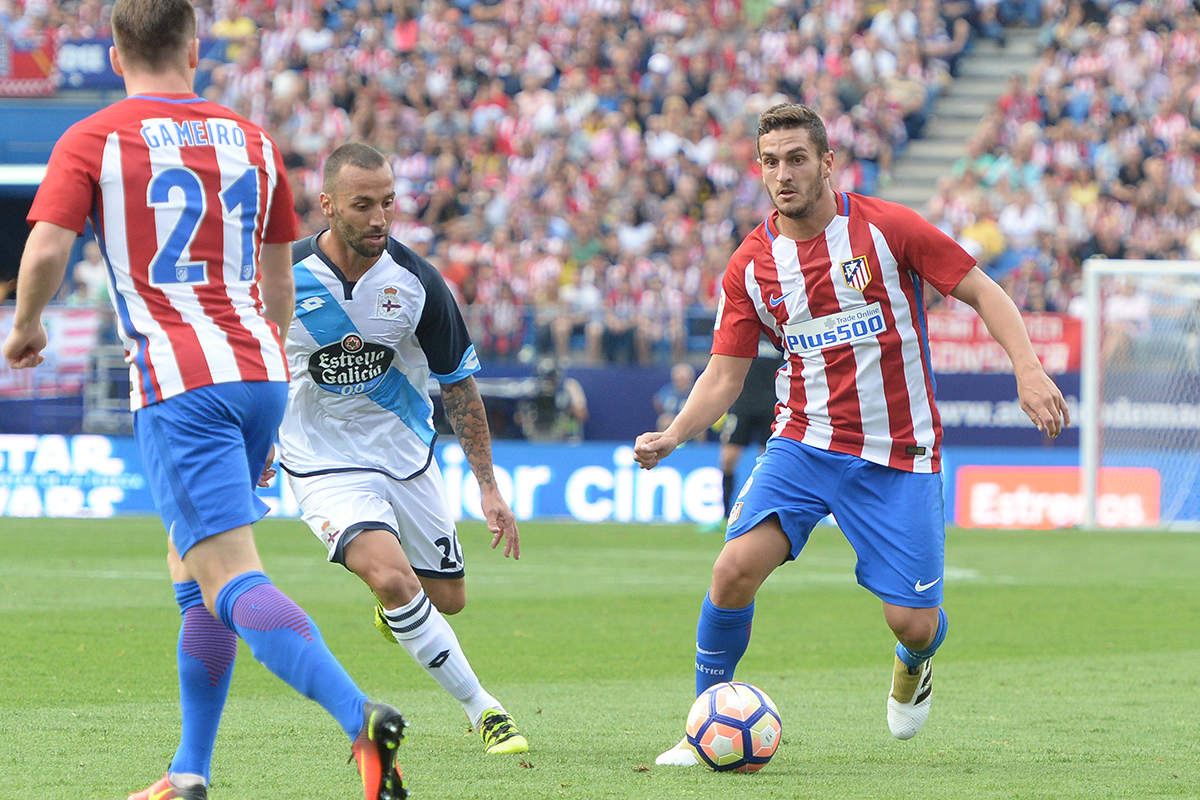 In transition, his ability to make concise decisions under intense pressure, ensured he was crucial in unleashing the likes of Antoine Griezmann and Yannick Carrasco on the break.

All things considered, Koke's all-round contribution saw him play an integral role in Atletico fighting their way back into the game and in thwarting Barca's multifaceted frontline.

Having regularly been deployed out wide, it's been terrific to see the versatile Koke shining from a central midfield post this season, which is probably the position that best suits his diverse skill set. The fact he's created more chances per game (3.4) than any other player in La Liga so far this season – ahead of the likes of Messi, Neymar, Toni Kroos and Luka Modric – is testament to his strong start to the campaign.

At just 24, it's scary to think the man who's already featured a staggering 269 times for his beloved Atleti will only continue his extraordinary progression under Simeone's expert tutelage. Koke has also started both of Spain's World Cup Qualifying matches this season under new national boss Julen Lopetegui.

“He is one of those all-round midfielders who is gifted at reading the game, he knows how to play in different positions in the centre and he has very good peripheral vision,” said Simeone of his chief creator after a 2-0 victory over Real Sociedad in April.

Meanwhile, the man himself has explained his insatiable appetite for hard graft: “I work hard every day and try to improve. Every day I try to be a better person and a better player. I’ve been at the club since I was a boy, the club has always been a part of my life since I was six. So I am a club man and I fight for that as well,” he said.

Since making his senior debut at Barcelona back in 2009, it really has been remarkable to see how far Koke has come. Developing into the world class player he is today unequivocally serves as the best possible reward for his exemplary attitude and relentless desire to achieve.