James Rodríguez is a wanted man. The Real Madrid star has, according to reports, decided to leave the Spanish capital this summer and isn’t short of potential suitors.

Manchester United are keen. Chelsea, too. And, if Spanish journalist Eduardo Inda is to be believed, it’s the Blues who are leading the race to sign the Colombian.

Antonio Conte's squad undoubtedly needs strengthening ahead of next season given Champions League football will be back on the agenda. And there is certainly room for Rodríguez in the Blues squad following Oscar's to China departure in January.

But Rodríguez won't come cheap. It'll cost in excess of £50million to convince Real to sell and if they managed to move Rodríguez on, then it's likely Los Blancos focus their attention of prising Eden Hazard away from Stamford Bridge.

That shouldn't put Chelsea off, however. They are under no pressure to sell Hazard and the arrival of another world class star would prove to the Belgian that he is at a club with ambitions of adding another Champions League trophy to their already bulging cabinet.

So how could Conte set up his side if Rodríguez arrived? We've taken a look… 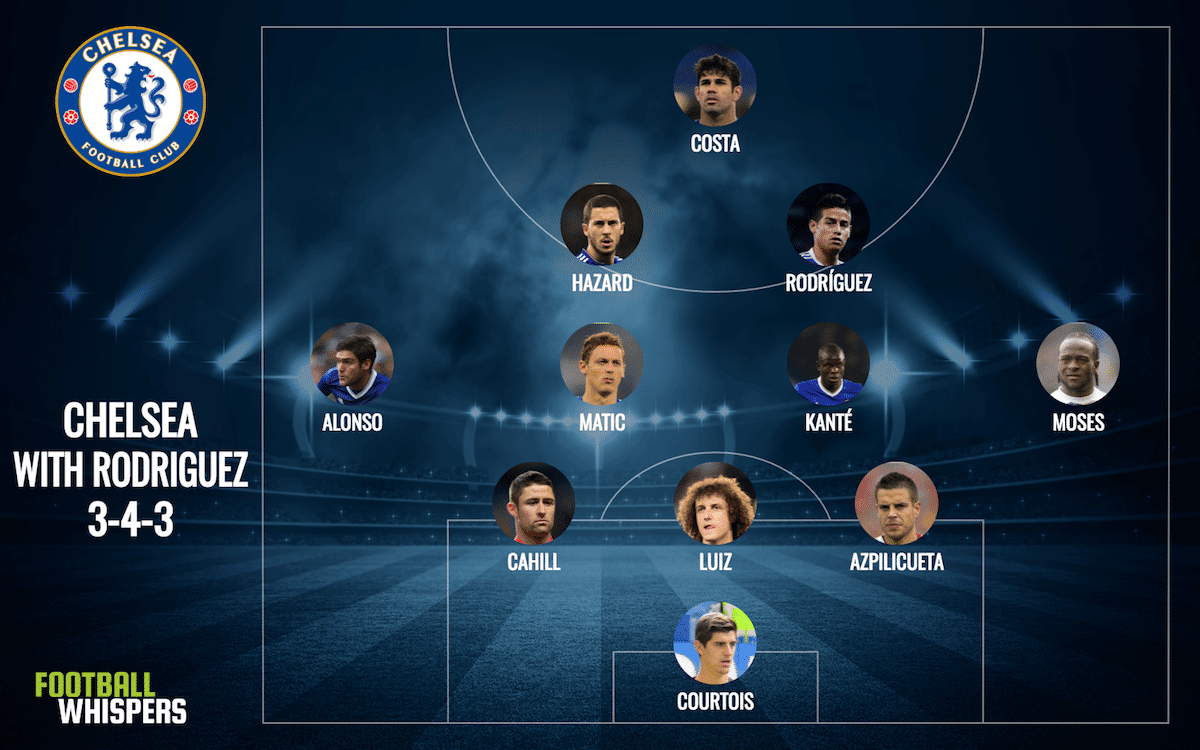 It's the system that won Chelsea the title and the old adage of if it ain't broke, don't fix it will probably be adhered to by Conte next season.

The signing of Rodríguez wouldn't require a change of style or system from Chelsea. The 25-year-old would be perfectly suited for one of the two positions behind Diego Costa, that is assuming the Spain international remains at the club beyond this summer.

It is a role that would allow Rodríguez to move freely across the attacking third and leave him with little defensive responsibility, much like Hazard.

This season in La Liga, despite his lack of playing time, Rodríguez has averaged two key passes per game for Real Madrid. Only two players in the Chelsea squad, Hazard (2.4) and Cesc Fabregas (2.1), can better that figure in the Premier League.

He dribbles on far fewer occasions per game than Hazard, 0.6 compared to 4, but their differing styles would complement each other well and cause opposition defences several problems.

With their guile and Costa's physicality, Chelsea would possess an attacking trident that could unpick the tightest of defences or bludgeon their way through. 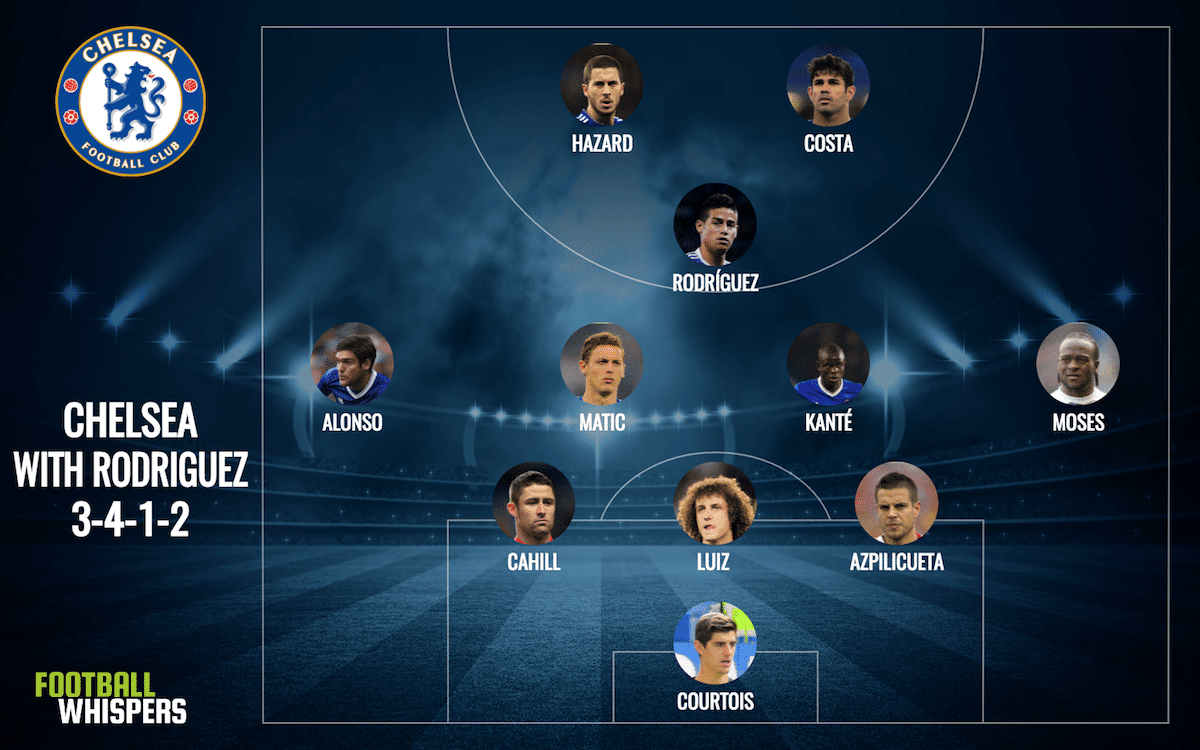 Pushing Hazard further upfield alongside Costa would give the Colombia captain more space in which to operate and pick passes. Whether the Belgium star would be receptive to playing up front is a different issue.

It could be a system used at Stamford Bridge against sides who sit back and defend. Fabregas could also be brought into the starting XI in place of Nemanja Matić to add creativity from deeper positions.

Of course, if Hazard was to depart to Real Madrid, and that is a big if, then Rodríguez would be seen as the creator in the Chelsea side.

Playing him behind two mobile strikers – perhaps Michy Batshuayi and Costa – would allow the former Monaco star's range of passing to be best utilised. 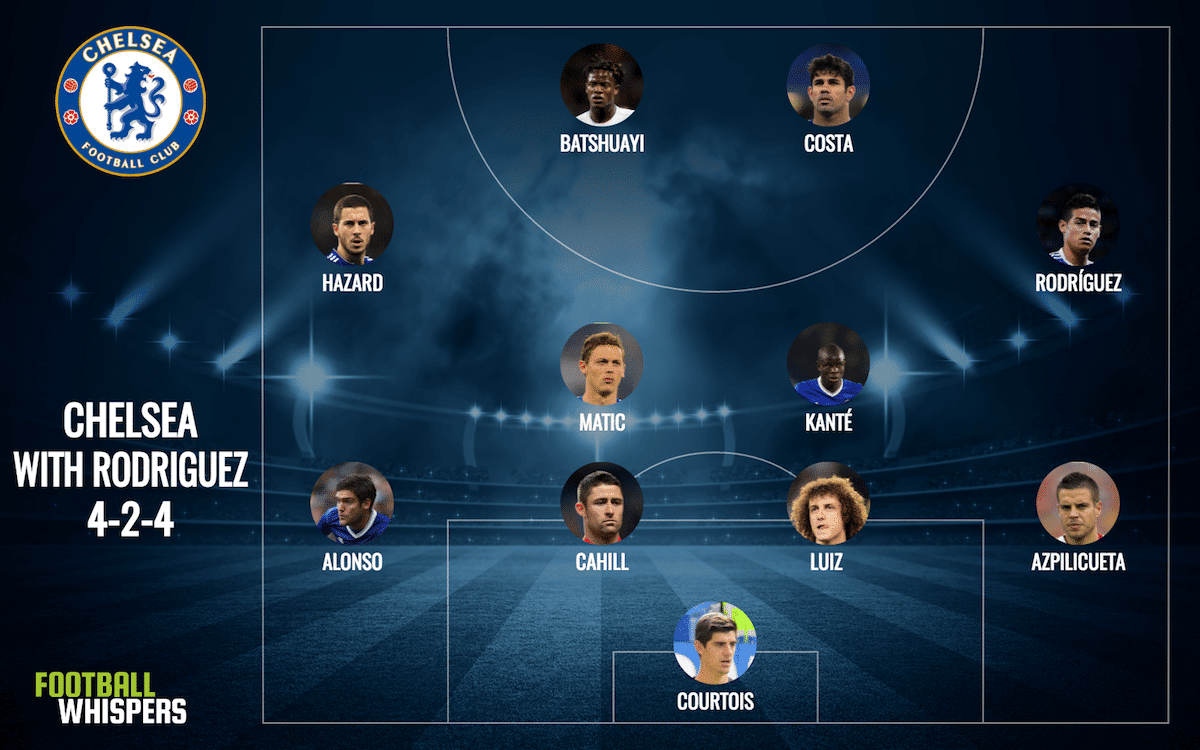 It was a system Conte tested in pre-season following his arrival at Stamford Bridge but one he quickly ditched in favour of a return to 4-2-3-1, which was, of course, done away with after a 3-0 defeat to Arsenal in September.

However, with more time to work with his squad this summer and a chance to bring in players with different qualities, perhaps it's a formation the Italian will revisit.

Rodríguez's potential arrival would open up the possibility of Conte trialling the system once again.

Rodríguez would, in all probability, be played off the right. It is a role he has performed in at times for Madrid this season, making ten appearances, scoring three goals and providing one assists.

He wouldn't be a conventional wide man, however, Chelsea fans wouldn't see Rodríguez getting to the byline and delivering crosses for the two strikers in the penalty area.

He would, as a left footed player, naturally drift infield and attempt to link up play. Hazard, on the opposite flank, would be likely to do the same meaning width would have to come from the full-backs.

But this system would leave Chelsea exposed defensively. Hazard and Rodríguez do not enjoy tracking back and neither are great tacklers, although Rodríguez has averaged 1.3 tackles per game in La Liga.

It would put more strain on Chelsea's midfield and while N'Golo Kante can cover the work of two players, it would be too much to ask the French midfielder to do that in over 50 games.