Diego Simeone manages in much the same way as he used to play at the San Siro: aggressive, excitable, frenzied, wild. The Argentine is a leader who demands the spotlight. His emotional investment in every game is palpable; his reactions comedic. At the end of a particularly absorbing game, he has been known to slap his opposing manager firmly on the arm rather than offer the traditional nod and polite handshake.

Passion has punctuated Simeone’s footballing journey at every step. Growing up in Argentina, he was given the nickname ‘Cholo’ – a sobriquet usually reserved specifically for combative street urchins – for his voracious energy and commitment. However, another element has been noticeable throughout his time as both a player and a coach, and that is his distinctly Italian style.

As a player, Simeone understood his role within the team and rarely strayed from it. He was pragmatic, often to the point of underhandedness – England fans need no reminding of that – and organised. It is no surprise, then, that he thrived within the rigorously tactical confines of Serie A during the 1990s. Equally it is no coincidence that the teams he has managed, particularly his Atletico Madrid side, have been imbued with similar themes.

After years of domination from great passing teams, Simeone’s Atletico, with their Cholismo brand, had won without emphasising possession. Italian football, with its rich counter-attacking history, was proud. 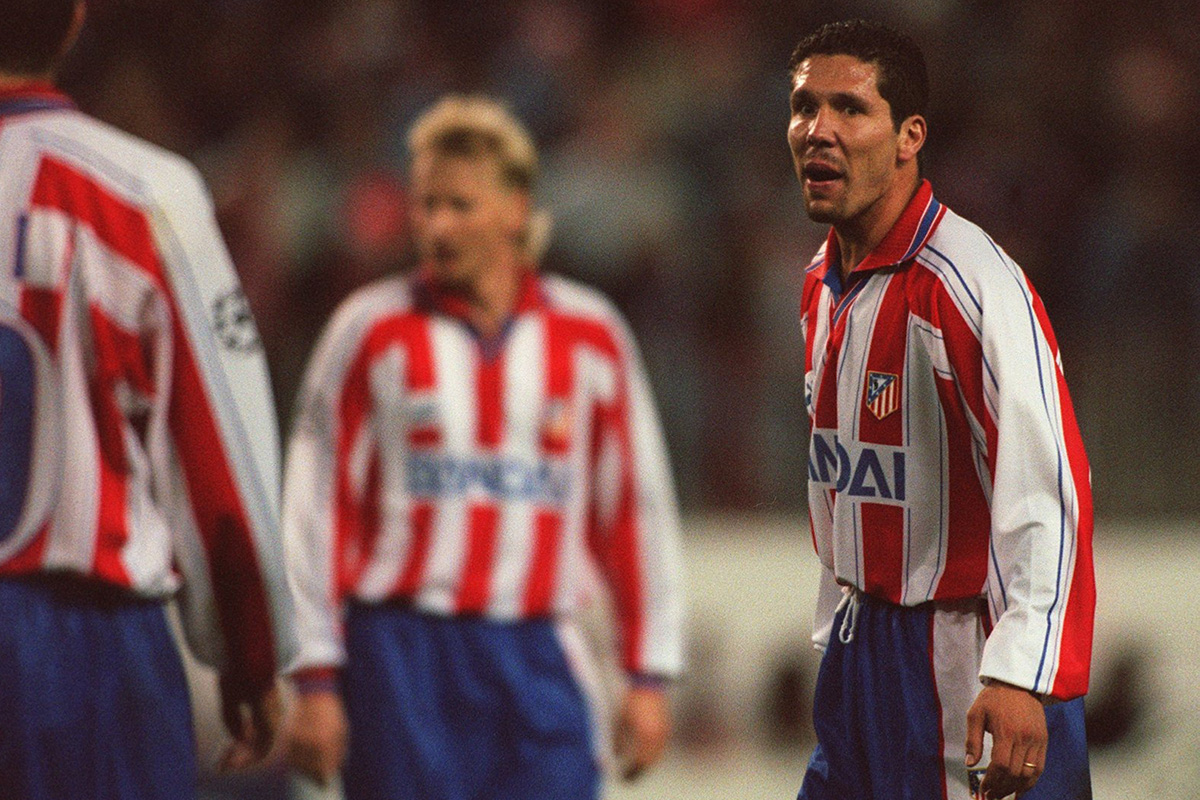 After coming through the Velez Sarsfield youth academy, Simeone’s first move to Europe saw him arrive in Tuscany with Pisa, who at the time were managed by Mircea Lucescu. But his first season of Serie A football didn’t end positively. The club were relegated and, after failing to return at the first attempt, the player moved on to Spain.

Successful spells with Sevilla and Atletico Madrid followed, with Simeone proving an integral cog in the latter’s league and cup-winning team of 1995/96. Having helped lead an underdog to a surprise La Liga title, the midfield enforcer was soon charged with rejuvenating an ailing Italian giant.

Since their exceptional spell in the 1960s when Helenio Herrera’s side ruled Europe for two straight years, Inter Milan had won just three Scudetti (1971, 1980 and 1989). However, with Massimo Moratti taking up the role of club president in 1995, millions of pounds (let alone Lira) were spent in the transfer market in order to return the Nerazzurri to the top of the calcio hierarchy.

Simeone arrived at the club in 1997 for a fee of £4.5 million. He was joined by other prestigious signings, including French duo Youri Djorkaeff and Benoit Cauet; Ivan Zamorano, a powerful striker from Real Madrid; and experienced Portuguese midfield shield Paulo Sousa.

Add in dynamic defender Taribo West; exciting Uruguayan Alvaro Recoba and, most impressively, Ronaldo – the 1996 FIFA world player of the year joining for what was then a world record transfer fee of £13.2 million – and it was no wonder that Moratti's men were tipped to take the title back to the Stadio Giuseppe Meazza.

While Brazilian icon Ronaldo was undoubtedly the most talented player in that Inter side, as well as their attacking fulcrum, Simeone was arguably the most inspirational. Playing in a slightly more reserved role than he had with Atletico, the lung-bursting forward surges were less frequent, but his tactical nous became integral to the team.

Under the auspices of Luigi Simoni Inter finished runners-up in Serie A in 1997/98 having battled with eventual winners Juventus for much of the campaign. While they ultimately came up short in the league, they did win the UEFA Cup with a 3-0 triumph over Lazio in the final. With the benefit of hindsight, it is reasonable to suggest that this year had a genuine impact on Simeone.

Coach Simoni set up his Inter side to play reactive football. A man-marking system was prevalent, something other teams in Italy and elsewhere were disbanding due to issues associated with it when up against intelligent movement. There was also a relatively deep defensive structure, with only Ronaldo ahead of the ball, and a focus on fast, attacking transitions.

Simeone played in the centre of midfield, though on occasion he would drop into the defensive line when Giuseppe Bergomi was unavailable, once again showing his nous. Coach Simoni has since stated that the Argentine was one of his most valuable players, telling La Gazzetta dello Sport, “[Simeone] was a coach already on the pitch. In my small way I knew that he would become a great one.” 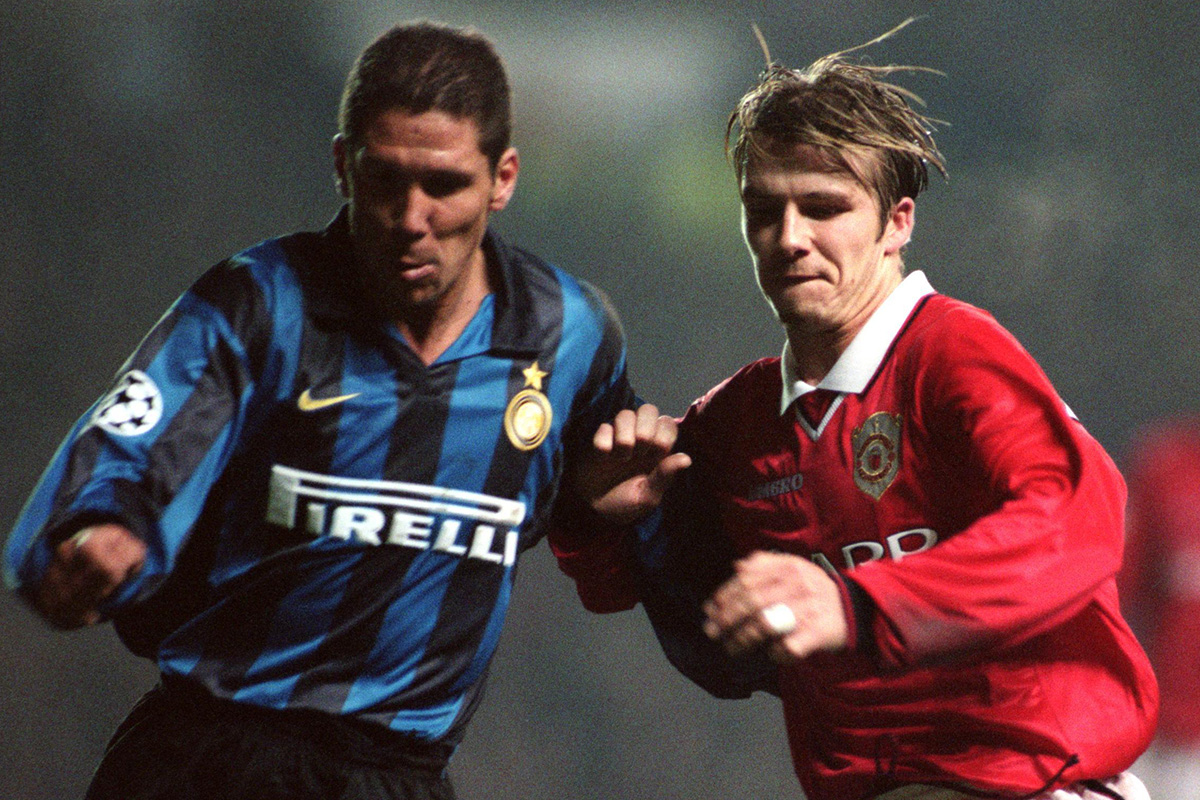 Simoni was sacked by November 1998 after a string of underwhelming results. Three new managers came in to replace him in 1998/99 without much success, and Inter eventually finished that term in eighth place. The campaign was a bitter disappointment – compounded by serious injury to Ronaldo – after the promise of the previous season. Simeone duly left for Lazio in a deal that took Italian striker Christian Vieri in the opposite direction.

After four years in Rome, the South American would see out his career in Europe with Atletico Madrid before returning to Argentina to retire with Racing Club. After working with Racing, Estudiantes, River Plate and San Lorenzo he took over as manager of Catania, steering the Sicilian side to a comfortable mid-table position in 2011 with precise counter-attacking football.

He took that style with him to Atletico Madrid in 2011, where he has gone on to establish himself as one of the world’s finest football coaches. Building his team around a solid defensive line – including the rugged Diego Godin, aerially dominant Miranda and the cunning Gabi – Simeone would lead the club to the 2014 La Liga title playing in a defence-first style that was no doubt influenced by his time with Simoni’s Inter.

Simeone is an Argentine living and working in Spain, but his principles remain distinctly Italian.