Harvey Barnes made his Leicester City debut in the Champions League.

It may have been as a substitute in the final match of the group stage, a game which ended in a 5-0 defeat. And, yes, the Foxes had already qualified for the knock-out. However, nobody can ever take that away from the now 21-year-old.

On the opposing side to the midfielder that night were Diogo Jota and Rúben Neves. Willy Boly was, meanwhile, on the bench. It would have been a surprise if any of them had seen their footballing future in the Midlands.

Shortly after his debut, Barnes went on loan to MK Dons, then Barnsley, and last summer West Bromwich Albion. It was at the Hawthorns he stepped in the spotlight.

Barnes had been solid in his first two loan spells – averaging a goal or assist every three games, or slightly quicker – but he shifted roles at West Brom to become a No.10, and it paid off.

He struck nine goals and claimed six assists in the Championship before he was recalled back across the Midlands to Leicester in January. For Foxes fans, the prospect of one of their own translating this success to their first-team, which was still muddling around under Claude Puel, was mouth-watering.

At the Hawthorns, Barnes’ big strengths were dribbling, creating shooting opportunities for himself, and fashioning good chances for teammates. At just 20-years-old, he was averaging 3.56 shots per game, and that’s as a midfielder.

Could he translate this to the Premier League, though? That was the big question. It's one that has been emphatically answered.

Barnes currently averages 4.09 shots per game, as well as 2.3 successful take-ons, which is an unusual amount for someone who isn’t an out-and-out winger. His shot selection might not be ideal, but he’s still getting good enough chances to be worth 0.51 expected goals per game from open-play. 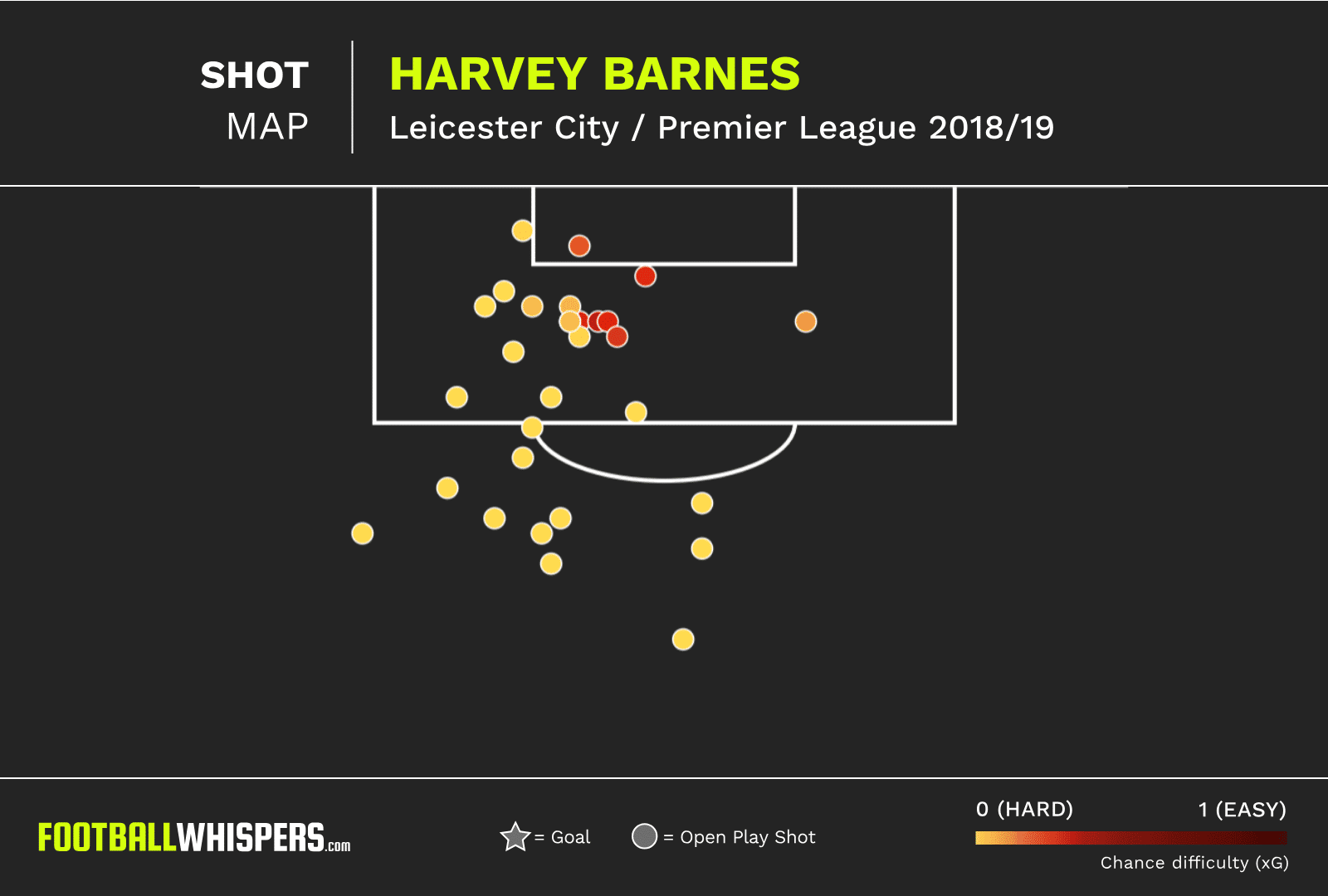 While he hasn’t scored yet that expected goals rate would suggest it’s only a matter of time. Altogether, his shots have been worth 4.05 expected goals.

Part of why he hasn’t found the net is an incredibly low shot accuracy rate of 18.7 per cent, which is far below the usual rule-of-thumb of around 30-33 per cent. This should right itself, however, as at West Brom he directed 28.4 per cent of his shots on target. 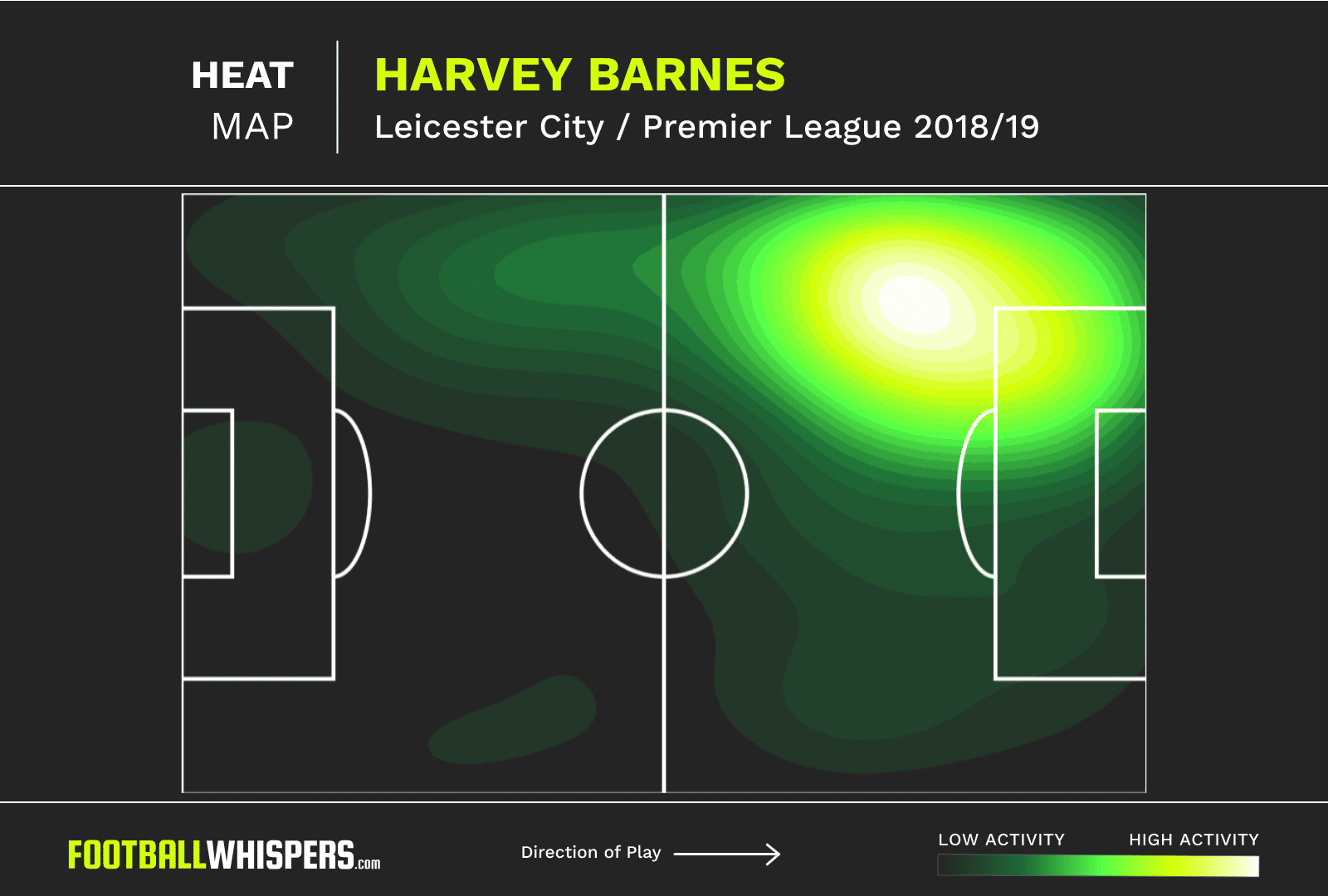 That a player like Barnes is, first, in the team and, second, operating in a wider role, as highlighted above, shows how Leicester have changed in the past few years.

The Foxes’ title win was built on a superstar on the right and a workhorse on the left, in Riyad Mahrez and Marc Albrighton. For a while afterwards, the team persisted with the 4-4-1-1 formation that had brought them that success. There were experiments with other formations, but nothing quite seemed to stick.

Barnes is part of a new Leicester, with a speed of attack that stretches, for once, past Jamie Vardy. Ricardo Pereira on the right-wing (either in midfield or defence), James Maddison, Demarai Gray, and now Youri Tielemans are all goal threats and are good enough defensively to keep the house of cards from falling down.

There's also a theme among those new players. Pereira is 25, Maddison and Gray are 22, Tielemans and Barnes are 21. Key players on the defensive side Wilfred Ndidi and Ben Chilwell are also 22. This is now a very young team.

On the ball, Barnes is a dynamo. He’s quick, well-balanced, and with a sensible enough head to pass the ball onto someone else before he runs himself into a corner.

He’s also – perhaps more important to fans than performances – exciting. Puel might have been fired, in part, for mediocre results, but the biggest factor was surely the fan discontent.

King Power Stadium regulars bemoaned the slow pace of play and amount of time it took the team to get going in matches. Barnes played six games under Puel, but really he represents the post-Puel period.

Barnes made his Leicester City debut in the Champions League. He might not play for the Foxes in that competition ever again but that doesn’t matter. For many, at least for the moment, just being him is enough.