After playing on the left for Arsenal most of last season, Alexis Sanchez has been handed a more central role by Arsène Wenger. With the Chilean scoring more goals and picking up more assists, it’s hard to argue that the experiment has worked.

One down side to the move has been Olivier Giroud’s demotion to the bench. It hasn’t stopped the French forward finding the back of the net. The 30-year-old, although only playing 732 minutes, compared to Sanchez with 2191 and Theo Walcott on 1547, he has scored eight times in the league and 12 times in all competitions. That’s a goal every 102 minutes.

Going into Saturday’s tough away fixture at the Hawthorns, West Bromwich Albion are not going to make things easy for the London club. Playing Giroud, with the attributes he has makes perfect sense against Tony Pulis’ side.

When you rank forwards in the top leagues this season – who have made over 15 appearances – Giroud’s goal per 90 minutes ranks as high as Alexandre Lacazette, Kylian Mbappé and Pierre-Emerick Aubameyang. Players that Gunners fans would happily see arrive at the Emirates in the summer.

If you are questioning Olivier Giroud's inclusion in the France team. This is for you. Goals per 90 mins #Arsenal via @WhoScored pic.twitter.com/VE4N63AWdx

This is not a one-off either, over the past three seasons, only three strikers have found the net more per 90 minutes than the former Montpellier front-man. His ability, to not only find the back of the net, but force shots on target, wins balls in the air and bring others into play, is why he is ranked amongst the top 10 strikers in Europe.

Giroud’s shots on target are turned into goals 49.9 per cent of the time, putting him away above the average amongst Europe’s top forwards. Sanchez in comparison, scored 0.56 goals per 90 minutes and has a conversion rate of 38.6 per cent.

Playing Alexis Sanchez off the frontman 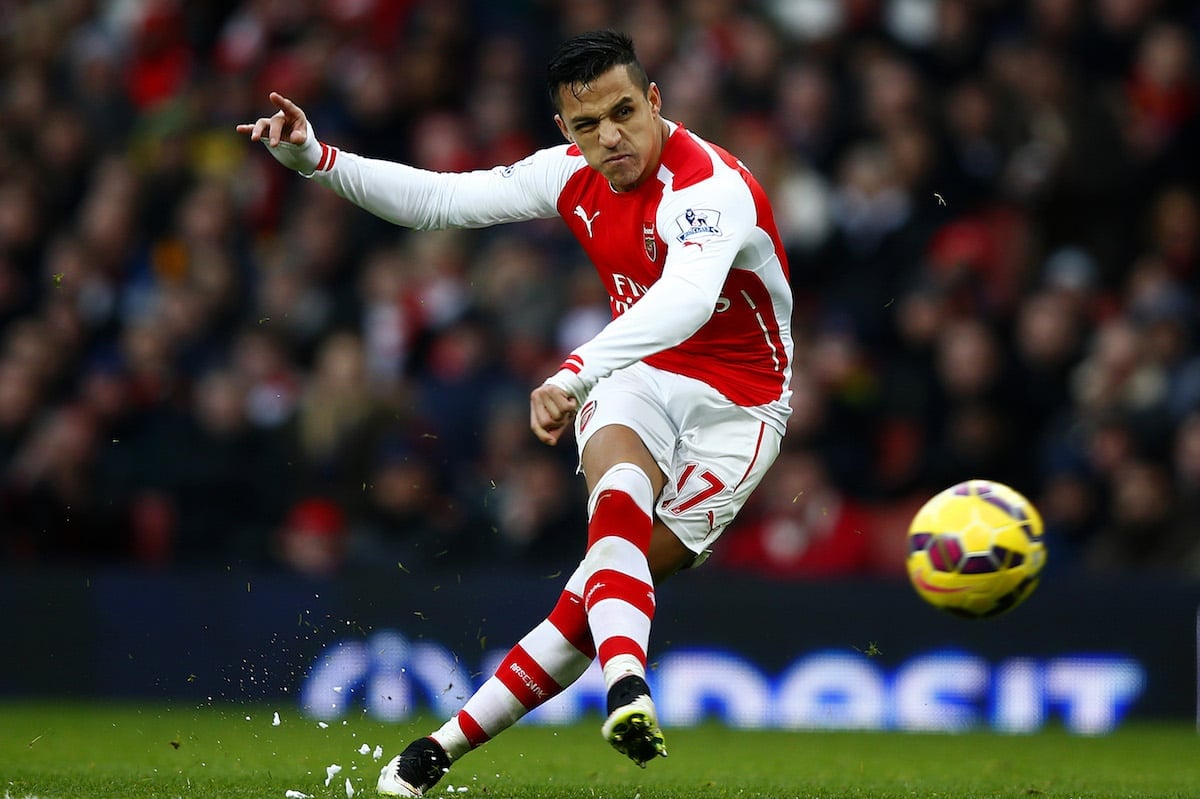 Read More: Who are the 10 Best Out-and-Out strikers in Europe

As Edinson Cavani, Antoine Griezmann and Paulo Dybala have shown over recent seasons, just because you are not playing through the middle at every opportunity, doesn’t mean you can’t be a successful forward.

By moving Alexis Sanchez wide and letting Giroud play as the No.9, if Wenger is smart, you can combine the strong points of each player and let them work out the positional issues themselves. Just like Griezmann for France, you can play off the big striker, will still maintaining you place as a forward.

Cavani showed for PSG, that playing from a wide position can be beneficial, as long as you have the movement and intelligence to be in the penalty area when your team needs you.

Wenger, whose side trail Premier League leaders Chelsea by eight points, admitted: “We’ve never had so many players who could perform and score goals.

“In terms of numbers and quality, this is the best attacking unit I’ve had here,” Wenger declared earlier i the season. “We once had Bergkamp, Henry, Wiltord, then Van Persie. Which was not bad.”

It was a bit of a stretch, and the numbers didn’t quite add up, but in combining his two best forwards, you are gaining an extra edge, without losing anything up front or in defence.

Alex Iwobi would be one of the players to miss out, but the young Nigerian forward, with three goals in 18 starts, has probably played more minutes than is right for his development this term. In turn that has hindered him in recent months. 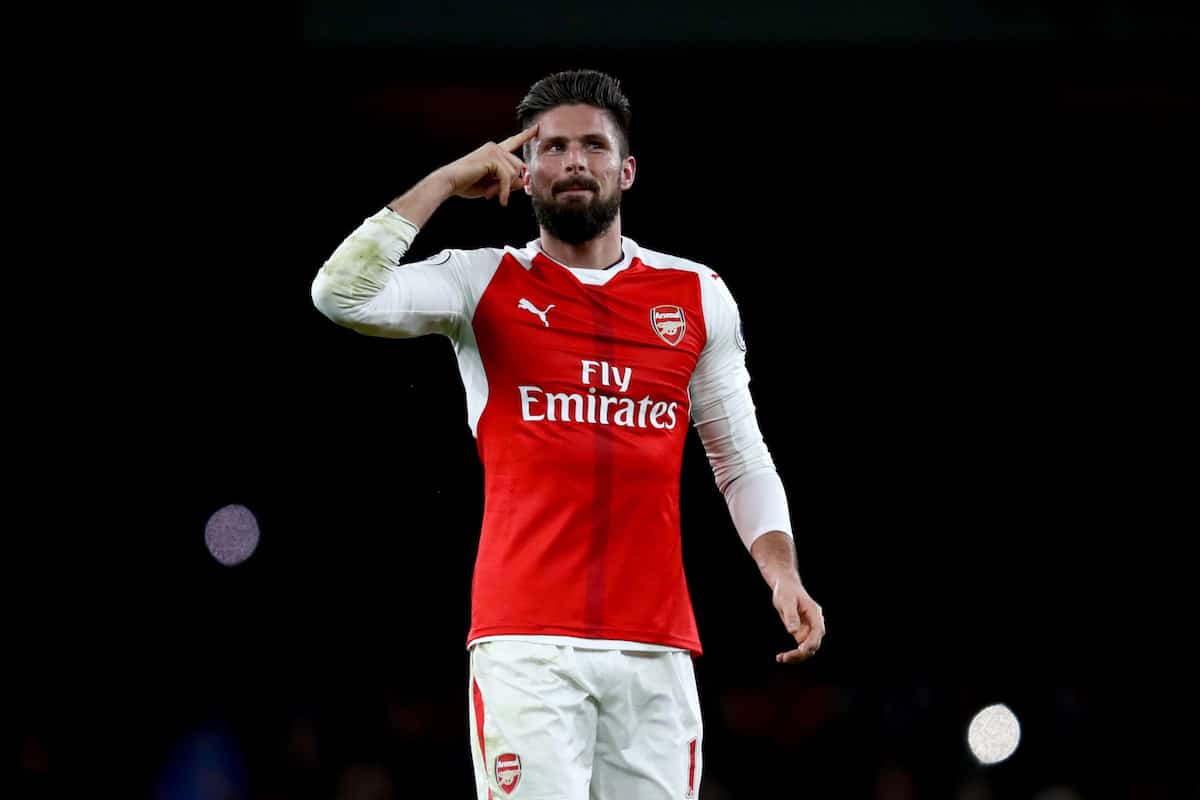 If Arsenal fans are worried about losing an edge of pace up front, again, they only have to look towards PSG last season. Zlatan Ibrahimović was not a man to contribute to fast breaks. He’d start them, dropping deep to win the ball and pick out one of the willing runners, then let them get on with attacking the opposition.

Giroud does the same for France, letting Dimitri Payet, Griezmann and the other younger, faster players burst forward in numbers. He doesn’t have to be a factor in those situations, but you can’t miss out on is his ability to put the ball in the back of the net.

Something he has done for Arsenal as well as anyone this season.

After signing a new deal that will keep him tied up at the Emirates until 2019, the Frenchman declared he’d be delighted to see both Sanchez and Mesut Özil follow his lead.

“Obviously, we hope they're going to do the same but it’s up to the player,” he told Sky Sports News.

“I really wanted to sign another contract and I don't know what they want, but hopefully they will do it soon.”

Not the actions of someone who is worried about his place in the team, but a player who knows that his team-mate have the skillset that he doesn’t and both provide a route to goal for the 30-year-old.

Playing Alexis on the wing, doesn’t have to be as simple as that. You let him drift, finding space wherever he wants and you let him play to his strengths.

This term, his numbers are up. The former Barcelona man is finding the target with more shots per 90 minutes, he’s successfully beating players off the dribble at a higher percentage – 66.6 per cent to 60 per cent last season – he’s losing the ball less and finding more key passes.

There’s no reason to suggest that can’t continue playing off Giroud.

Thinking outside the box

Max Allegri at Juventus has recently shown that forwards don’t have to conform to the natural roles that we are accustomed to seeing them in. The Italian boss has played 6 foot 1 inch tall Croatian forward, Mario Mandzukic out on the left of his front-line. The 30-year-old has beaten players off the dribble just 16 times this season, but he gives The Old Lady and outlet down the flank and allows but Gonzalo Higuaín and Dybala to play more centrally.

Perhaps playing Giroud there would be a stretch, but the point is, your starting position on a pre-game graphic does not determine the areas you should take up during the game. Football is much more fluid than that.

Nacho Monreal or Kieran Gibbs can provide width, plus, even Granit Xhaka, like what Idriss Gueye does for Everton, can push into the space and provide crosses with his excellent left foot.

Arsenal need to take advantage of Harry Kane’s injury and push Spurs and their other challengers for a place in the to four. That starts on Saturday with a win over West Brom and it’s a chance for Wenger to show something a little different against a very stubborn opponent.