Since joining Liverpool from Newcastle United for a lofty £25 million transfer fee, Georginio Wijnaldum has gone about his work in a diligent yet extremely effective manner.

After a slow start, his performances have steadily been getting better and better as the season progresses. The fact he's played every minute of all seven of Liverpool's Premier League fixtures bar the last five minutes vs Swansea so far illustrates aptly how highly Jurgen Klopp rates the Dutchman.

After suffering the indignity of relegation with Newcastle last season, Wijnaldum was, however, certainly one of the Magpies' better players, in a season where he bagged an impressive 11 goals and five assists in the league. It was by no means a perfect campaign for him, but Klopp knew the overwhelming quality he possesses and what a great fit he'd be for his project.

“I am so happy that we have got him,” insisted Klopp. “I think he can be a great player for us. He has already shown some really good moments in his career but the most exciting and important thing for me and my staff is that there is still so much extra to come from him.

“He can play a few positions for us and players that come through the Dutch system usually have a good tactical understanding and flexibility. That's really important.”

His versatility was obviously a key determining factor in the German tactician's keeness to acquire Wijnaldum, for he's capable of basically playing anywhere in the attacking and midfield positions. It must be said that Klopp's decision to deploy him in central midfield has already worked out to be a masterstroke, as Wijnaldum's adapted fantastically to the role.

To his credit, Wijnaldum, who brings so much energy and dynamism into the side, now looks right at home in the middle of the park, although he admits he's had to make a few adjustments. “It's difficult to compare my role here to the one I played at Newcastle,” he told the Liverpool Echo.

“Towards the end at Newcastle I was playing on the left side. At the beginning I was playing as the No 10. I was almost the only midfielder in front of the goal behind the strikers.

“This is a different style of playing. In this style you need to look to each other. Sometimes when the other two in midfield are going towards the box, you need to stay.”

All his hard work learning his role is undoubtedly paying off, though, and this was especially evident in Liverpool's 5-1 demolition of Hull City last weekend, where his immense footballing intelligence and strong relationships with his teammates provided him with the ideal foundation to have a profound impact.

Deployed in his nominal position on the left side of Klopp's central midfield three, his understanding of his midfield partners' movement and tendencies in Adam Lallana and Jordan Henderson was fantastic to watch. With Klopp typically instructing his players to constantly switch positions and interchange, Wijnaldum was crucially right in sync with his colleagues at all times.

Whenever he'd notice Henderson pushing upfield, he'd drop back and occupy Henderson's holding midfield post. In addition, he'd regularly perform well-executed switches over to right central midfield with Lallana. The way he'd sporadically interchange with his left winger, Philippe Coutinho, whenever the Brazilian dropped deep to collect possession added another dimension to the Reds' attack too.

In the latter scenario, Wijnaldum would use his powerful running ability to surge into the space created by Coutinho's movement to penetrate gaps present within the Hull defence. Indeed, Klopp deserves massive credit for the way he's so expertly coached his players to be so cohesive and on the same wave length. All this combined to see Liverpool persistently unsettle and manipulate Hull's defensive structure.

Liverpool's effectiveness only amplified when Hull went down to 10 men and another key aspect of Klopp's offensive philosophy really began to rip Hull apart. Seeing as Lallana and Wijnaldum were now afforded greater attacking freedom against their shorthander opponents, they, alongside the likes of Sadio Mane and Roberto Firmino, did a brilliant job of overloading the 10 spaces in between Hull's defensive and midfield lines. It wasn't uncommon to see three or four Liverpool players occupying this area at any given moment, and Hull unsurprisingly had no answer to this. The way Liverpool's attackers then seamlessly swapped positions, in order to disorganise Hull's defensive setup, worked wonders. Wijnaldum was definitely key in such situations, using his superb off the ball movement and intricate combination play to constantly unlock Mike Phelan's team. 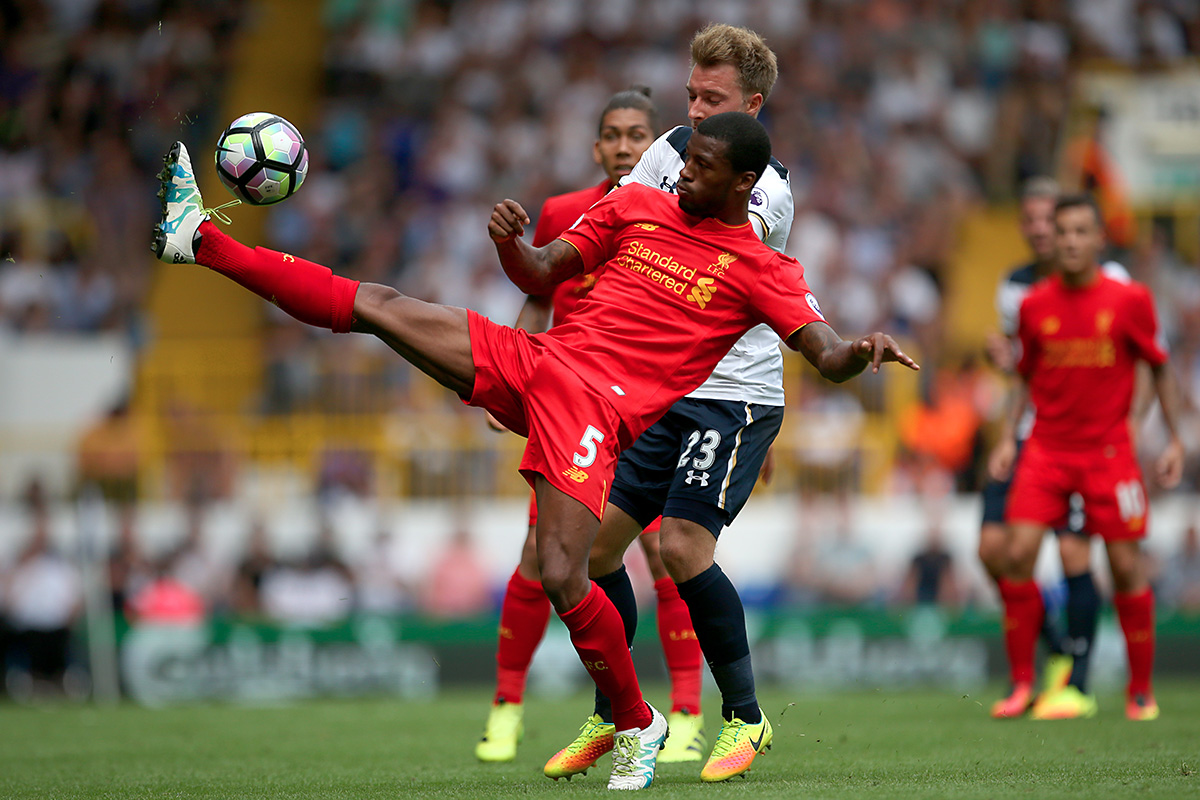 Hull centre-back and captain, Curtis Davies, made some fascinating observations about how incredibly difficult it was defending against Liverpool. “They didn’t give us a chance to breathe,” said Davies.

“It is hard to lay a glove on anyone. When there is so much interchanging you cannot put your mark on one person. It is tough to make a tackle. One second Mane will be in that hole, then Lallana and then Coutinho. There is a lot of interchange, quick football and with the full backs playing like wingers it becomes very difficult because you end up with backs against the wall.

“They play with Henderson and the two centre-halves at the back and the rest can go where-ever they want. That is not an ill-disciplined thing, that is organised.”

Wijnaldum's contribution also transferred over to the defensive end, where he did a great job of supporting James Milner with the marking duties of the in-form Robert Snodgrass. Showing tremendous concentration and discipline, Wijnaldum was always on hand to slide across and track the Scottish international if Milner was caught upfield.

Although he hasn't received the plaudits like some of his more eye catching teammates, Wijnaldum's efforts, which have at times gone unheralded, have been absolutely vital in Liverpool's promising start to the season, in terms of balance, structure and attacking fluidity. While the statistics state he's mustered 1.7 shots per game, made 1.5 key passes pg and completed 86.4% of his passes are solid, Wijnaldum's one of those footballers who shouldn't be judged purely by such metrics, for such figures don't take into account his vast footballing IQ.

Playing alongside Reds captain Henderson, who's taken him under his wing, is something that Wijnaldum's relishing and is extremely grateful for. “I’m new here and he’s done a lot to help me settle in,” he said. “We talk with each other a lot and I’m enjoying playing alongside Jordan.

“The partnership gives me a good feeling and I think it’s the same for him. We are open to each other and we try to help each other out on the field. It’s going well in the midfield with Jordan and I hope we can keep it like that for a long time.”

As he continues to develop his relationship with Henderson and all his colleagues, expect plenty more from the multifaceted midfield wizard, who's certainly making the most of his second chance in the EPL.

All things considered, Wijnaldum couldn't have dreamt of a better start to life at Anfield.