If there’s one thing that stats struggle to help you with, it’s who is or isn’t a good ‘finisher’. Until now.

Previously, if numbers were brought into the discussion then it would be to look at a player’s total expected goals (xG) – a measure of how good a player’s chances are – versus how many they’d actually scored.

But these expected goals totals include all of a player’s shots, from the 25-yard speculative strikes to the big-moment one-on-ones.

A far more sensible approach would be to take the chances that we, as watchers of football, recognise as tests of good finishing. And this helps to explain why Álvaro Morata is so maligned at the moment, and why Mohamed Salah was lighting up the league last season.

For the stat-lovers there’ll be a stats note at the end, but for the moment all that’s needed to know is that we’re looking at one-in-three, or better, chances.

These happen surprisingly rarely (Raheem Sterling got the most last season, with 20), and Morata’s recent goal against Southampton is a good one to think of. According to Football Whispers’ model, that chance had a value of 0.35 expected goals, so it was only a little better than a one-in-three opportunity.

This was the first high-quality chance that Morata had finished in the league this season though, missing three others which had been worth a combined 1.56 expected goals. 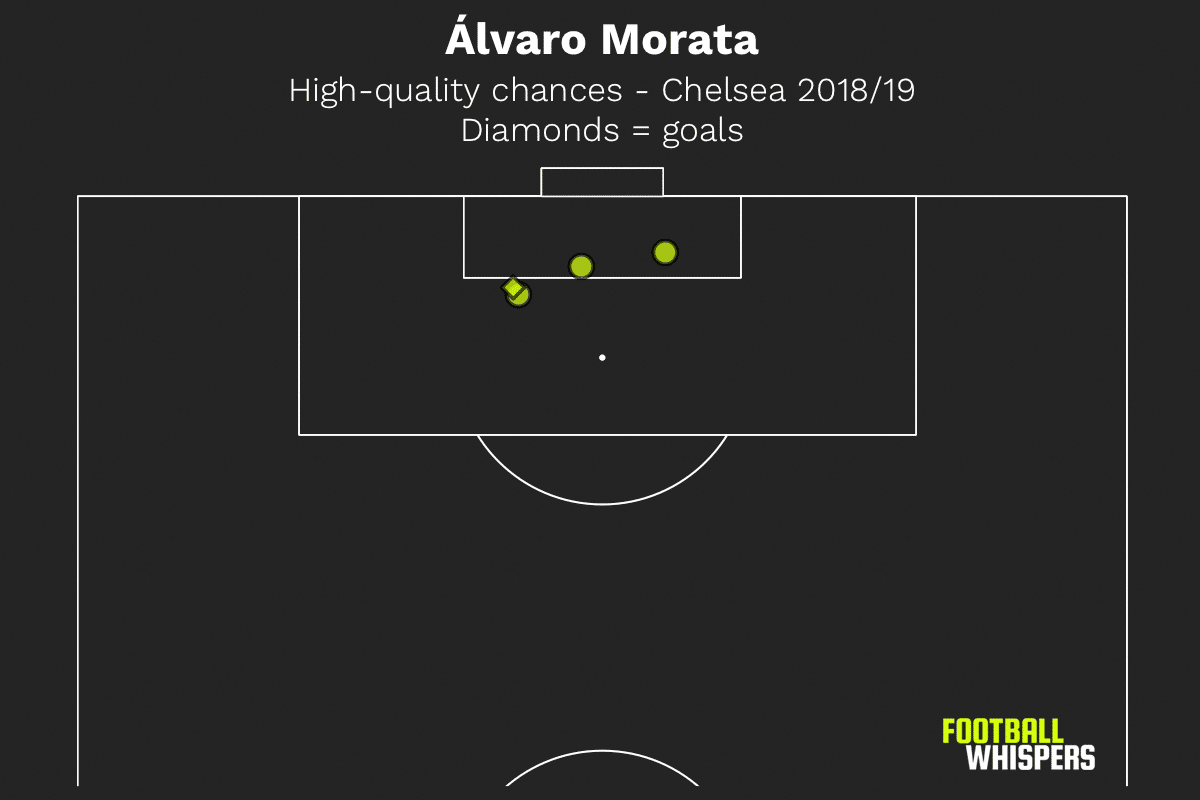 One-and-a-half goals left on the table; no wonder people thought he was a bad finisher.

On his way to a record-breaking season, Salah had 13 shots which had one-in-three odds or better in 2017/18, the joint third-most in the league. He hit the net with nine of them, a very nice conversion rate of 69 per cent. Every time the Egyptian approached goal, it looked like he would score. 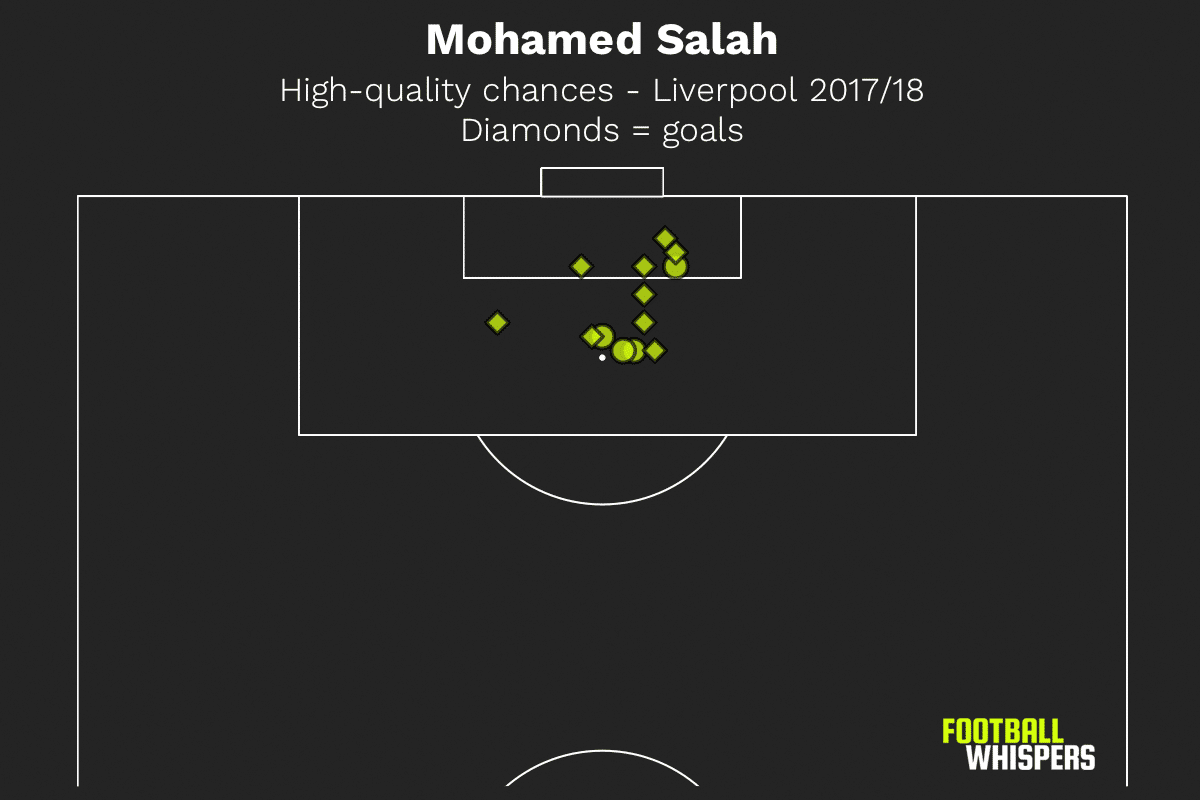 Of the four high-quality chances that Salah has had so far this season, he’s scored just two of them. It’s still a good rate, but it’s not like last year.

It’s hard to tell for certain. Seventeen events across a year-and-a-half isn’t a lot to go on; the safest thing to say is that last season Salah was on fire, but that it’s not hugely surprising that it hasn’t lasted.

This brings us back to Chelsea’s forlorn forward. While he might be squandering opportunities this season, Morata, like Salah, had a good record last campaign. 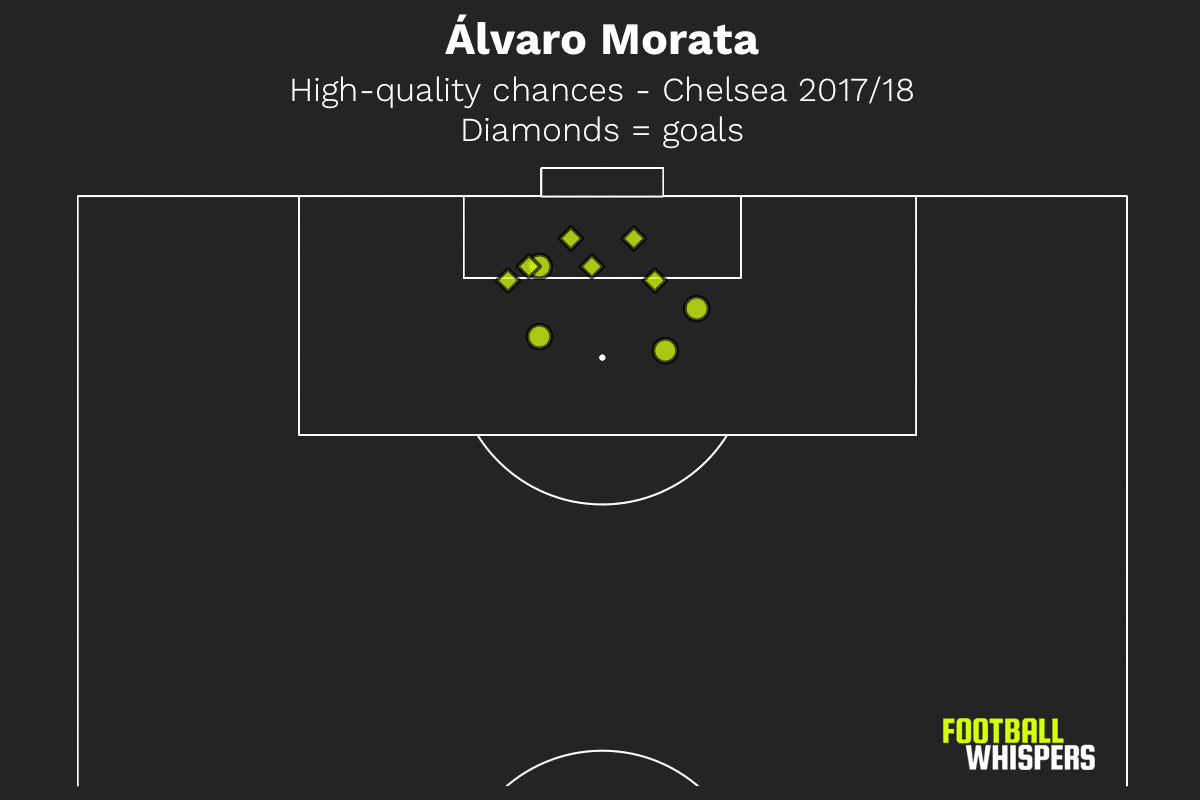 It’s interesting to note – for purposes of the narrative around him, if nothing else – that these six goals all came in a row, four of them before the end of September, and all of them before Christmas. In the second half of the year, he missed all four of his high-quality chances.

Does this mean that Morata’s a good finisher or a bad one?

Who knows. With six strikes in a row, followed by seven misses for his high-quality chances, it could be that he’s the archetypal confidence player. This might not give much hope for Chelsea fans, unless you happen to know of a good life coach that you can send to Stamford Bridge.

While you’re at it, you might want to send one to St. Mary’s too. Danny Ings leads the league for the amount of high-quality chances he’s had so far this season, with five, but he’s only scored one of them. Is it too much of a cliché to say ‘Ings can only get better’?

In the absence of all of the relevant information to find which chances were the types that would be a test of finishing skill, 0.33 was chosen slightly arbitrarily as a value to balance high-quality chances with enough frequency to be a subject to write about.

The fact that the expected goals value of Morata’s strike against Southampton was around this cut-off suggests that the one-in-three guess was good intuition.

The expected goals value of the chances could have been used instead of the conversion rate in this article – not all good chances are as good as each other – but that may have confused things without making the article much more statistically rigorous. The points around Salah, Morata, and Ings all still hold when looking at the xG value of their ‘high-quality’ chances instead of the conversion rate.