The Champions League has returned. Europe's premier club competition struts back into our lives and comes bearing an attractive gift in the shape of Tottenham Hotspur vs. Borussia Dortmund at Wembley.

Mauricio Pochettino's Spurs have started the Premier League decently, with seven points from their first four games, but face a daunting examination of their progress when they host Peter Bosz's Bundesliga-topping team on Wednesday night.

Spurs don't have happy memories of Dortmund. The two sides have only ever met twice in competitive action, in the Europa League round of 16, when Thomas Tuchel's men swept the North Londoners aside 5-1 on aggregate.

Reading too much into those two games is dangerous, though. At that time, Spurs were locked in a gripping title race with Leicester City and, in the first leg, leaving Harry Kane, Mousa Dembélé, Kyle Walker and Érik Lamela on the bench showed where Pochettino's priorities lay.

Now, the landscape is largely the same. Spurs are still an excellent team but Dortmund remain as one of the most devastating attacking sides in European football, even with Ousmane Dembélé's departure to Barcelona.

However, one of the key points of discussion in the build-up to this game has been Dortmund's growing injury list. The Germans endured a frustrating 0-0 draw at home to Freiburg on Saturday and, to deepen their woes, captain Marcel Schmelzer and Marc Bartra suffered injuries.

Bartra was forced off in the first-half and will miss the Spurs game, while Schmelzer – who was making his return from injury following a seven-week layoff – has been ruled out for six weeks after suffering a partial tear to the lateral collateral ligament in his ankle.

Of course, it plays into Tottenham's hands and Dortmund's depleted defence should be an incentive to go out and attack the German side.

With a trip to Dortmund and a daunting double-header against Real Madrid to come in this group stage, getting off to a strong start is important if Pochettino's men are to progress.

With Dele Alli suspended, Spurs will be missing a key creative force but, in Christian Eriksen and Heung-min Son, Pochettino has enough talent at his disposal to break down the yellow wall and clinch three precious points.

The Tottenham manager will look to Eriksen to be his primary string-puller in possession. Although it's unclear as to whether Dortmund will set up to absorb pressure and hit Spurs on the counter, the home side will certainly be forced to do their fair share of chasing the ball. In the three Bundesliga matches they have played so far, Dortmund

In the three Bundesliga matches they have played so far, Dortmund have averaged 66.9 per cent possession, including 83 per cent of the ball against Freiburg, the most by any team in a German league match in ten years.

More pertinently, though, they are yet to concede a goal, and much of that has to do with the excellent defensive work of Bartra, who started each of their league games at the heart of the defence alongside Sokratis Papastathopoulos. In the impressive 3-0 win at Wolfsburg, Bartra was the man of the match, winning 12 duels and ten aerial battles. Without such a commanding influence at the back, Spurs should look to capitalise.

With Alli out, Pochettino will rely on Eriksen as his creator-in-chief and fill any void left by Alli's absence. Of course, that will require Eriksen to simply continue in the same vein as the last few weeks. The Denmark international has been outstanding so far this season and has already created ten chances in the Premier League.

Furthermore, in the 3-0 win at Everton, Eriksen was a player bursting with confidence as he hit full-flight ahead of this European showdown.

His ability to create is well-documented, but the 25-year-old also carries a significant goal threat which could hurt the German club. In the first screenshot below, you can see that Eriksen starts from a deep position, beside the referee, as Ben Davies carries the ball forward. 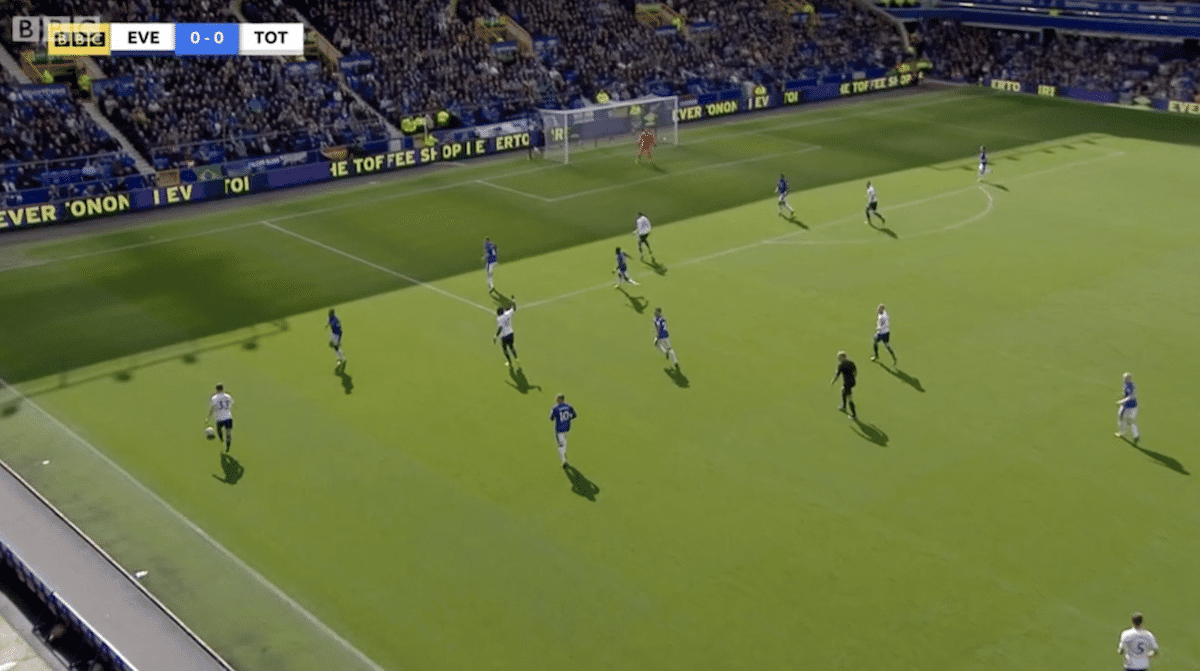 While Harry Kane and Alli are the targets in the box, Eriksen is a keen observer and knows what he is doing by merely occupying the space outside the box. In the image below, you can see Eriksen, still just outside the box, sensing an opportunity and signalling to Alli. It's precisely this anticipation and reading of the game that will make Eriksen key to Spurs' chances against Dortmund.

Eriksen's predatory instincts proved effective once more when he reacted quickest in the box to Jordan Pickford keeping out Davies' shot to make it 2-0. Throughout the game at Goodison Park, the 25-year-old found space, distributed passes incisively and generally dictated play in the centre.

Another example of Eriksen choosing the right moment to pounce was in the 2-0 win at Newcastle United in August. As Spurs built an attack, Eriksen accelerated past his marker, darted straight at the heart of the Magpies' defence and laid it on to Davies to score.

It's this elusive quality, this ability to slip in between the channels and offer fluency to Spurs' attack that could unlock Dortmund, who are likely to be highly-organised and affording little space.

Although Dortmund will represent a more robust examination of his abilities, there is every reason to suggest he is hitting peak form at just the right time.

Putting European Woes Behind Him

Last season, Eriksen was one of several Spurs' stars to underperform. In their six group games, Eriksen failed to score and registered just one assist, during the 3-1 victory over CSKA Moscow, and the Dane will hope to put those poor displays behind him.

This time last year, Eriksen was a shadow of the nimble playmaker that has lit up their displays this season. His touch and passing had deserted him, and he looked a yard off the pace as he toiled during Tottenham's Champions League struggles.

Lacking confidence and slower on the ball, Eriksen was singled out for a lack of enthusiasm to fulfill his defensive. There was even a point when 20-year-old Harry Winks outshone the Dane, notably in the 3-2 win against West Ham last November.

However, while Pochettino surely entertained the idea of dropping Eriksen, he stuck with him, and his faith was rewarded. The former Ajax man came good, enjoyed an excellent second-half of last season and has hit the ground running once again as he looks to cement his place as one of Europe's finest playmakers.

Eriksen himself insisted that we will see a matured, developed Spurs who have rid themselves of last season's painful campaign.

“Everyone is really motivated to show the world that we are a bit better than we were last season,” he said via The Evening Standard.

“They (Real Madrid and Borussia) are big opponents, so there is no better place to test yourself than in the Champions League and against them. We will see how far developed we are as a team.

Eriksen's proficiency from dead-ball situations is well-documented, and it may well be key on Wednesday night. Spurs have a team stocked with tall, physically imposing players.

With Eriksen's delivery from corners and free-kicks, the likes of Eric Dier, Mousa Dembélé, Moussa Sissoko, Jan Vertonghen and Toby Alderweireld will fancy their chances of meeting a cross with their head.

As touched upon above, Eriksen does not naturally gravitate towards tracking back and getting behind the ball, but he can ill-afford to switch off if Spurs lose possession considering Dortmund's threat on the break.

With the creativity of Nuri Şahin and Mario Götze, and the sheer blistering pace of Pierre-Emerick Aubameyang, not to mention a rising star in Christian Pulisic, Spurs will require every possible bit of help at the back.

Of course, he is capable. Eriksen may not have a reputation as one of the hardest-working players in the Premier League but, last season, only Gylfi Sigurdsson covered more ground than him, with Eriksen averaging over 11km per game.

His total distance covered for the season was higher than even N'Golo Kanté, who is renowned for his engine and stamina in the middle, so Eriksen's ability to pop up all over the pitch could be a real asset for Spurs against Dortmund.

When Spurs played a 4-2-3-1 and Eriksen was deployed out wide, he was forced into tracking back, but even now with a 3-4-2-1, in which there isn't the same pressure to do so, he will have to show a willingness to help his teammates should they come under sustained pressure.

Spurs' creation in the final third will hinge largely on Eriksen's form. If he is on song, like he was against Everton, Pochettino's men stand a good chance of extinguishing their Wembley hoodoo and getting off to the ideal start in this season's Champions League.

However, as we know, Eriksen is only one player in a team of eleven and, suffice to say, each member of the Spurs starting line-up will have to operate at optimum efficiency if they are to get anything out of this game.