After taking the Bundesliga by storm this season with a string of exciting and dynamic displays for Borussia Dortmund, French winger Ousmane Dembélé has been tipped to develop into one of the stars of world football in the next few years.

The 19-year-old has been so impressive for Thomas Tuchel’s BVB side that Barcelona will reportedly make a move for him this summer, with the idea being that he will take the right wing berth vacated by Lionel Messi‘s central switch in their new 3-4-3 formation.

Barcelona-based newspaper Mundo Deportivo reported the news on Wednesday, and claimed that the Blaugrana initially highlighted Dembélé as a target after he broke into the Rennes first-team last season, but were pipped to his signature by Dortmund’s swift £12.75million move for the teenager.

The Bundesliga club would of course be reluctant to part with their burgeoning new star, and Barça would surely have to at least quadruple the figure that BVB forked out last summer if they are to have any chance of making the deal happen. 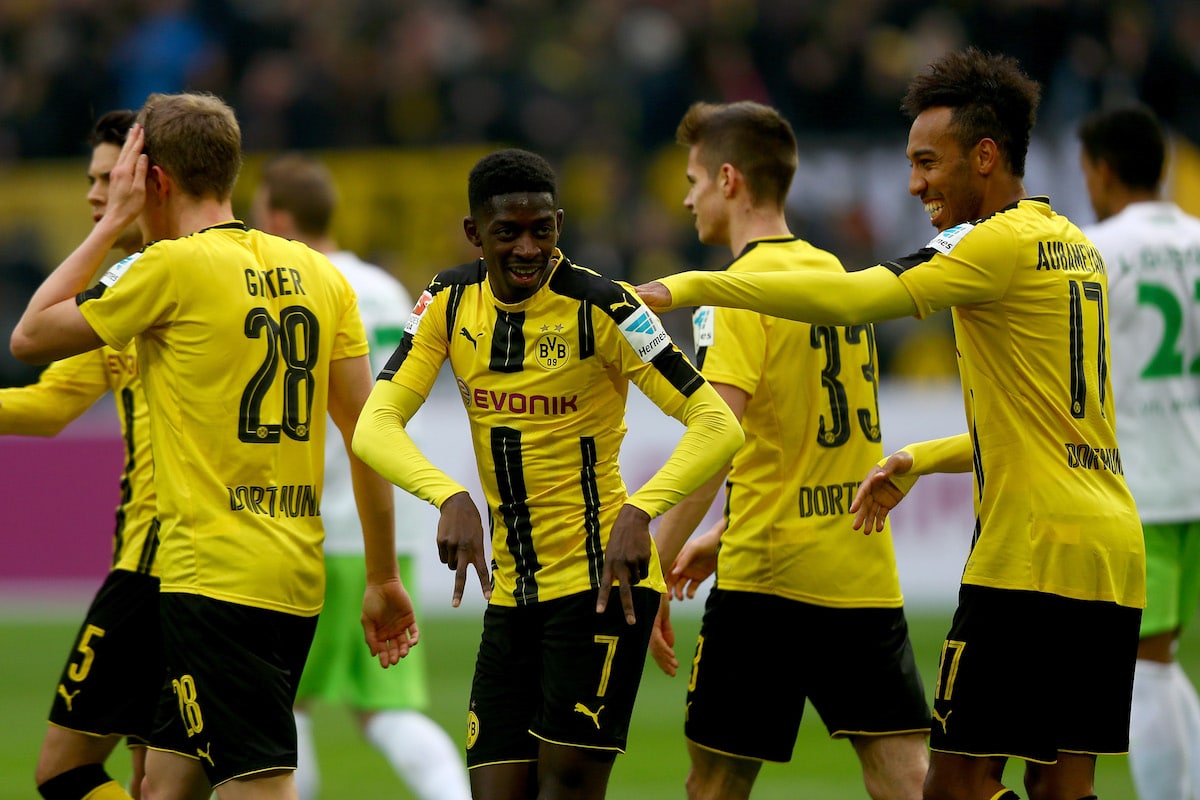 But, at 19, already starring in both the Bundesliga and Champions League, and with plenty of room for development, Dembélé’s current ability and future potential could easily justify such an outlay.

Indeed, the Frenchman’s virtuoso display in Dortmund’s 2-2 draw with Real Madrid at the Bernabéu in December will surely have caught Barça’s eye. The fact that he looked so at home on the highest stage, and has already shown a proclivity for wreaking havoc upon their greatest rivals, would make him an ideal candidate to become the next star of the Camp Nou.

However, gifted though Dembélé most certainly is, slotting into and improving this talent-rich Barcelona side would be no mean feat. Luis Enrique already boasts world class players such as Andrés Iniesta, Sergio Busquests and Gerard Piqué among his squad, as well as the impervious “MSN” frontline of Messi, Luis Suárez and Neymar.

We’ve delved into the statistics to see how Dembélé currently stacks up against his potential future attacking cohorts.

read more: why jorge sampaoli has to be the next barcelona manager 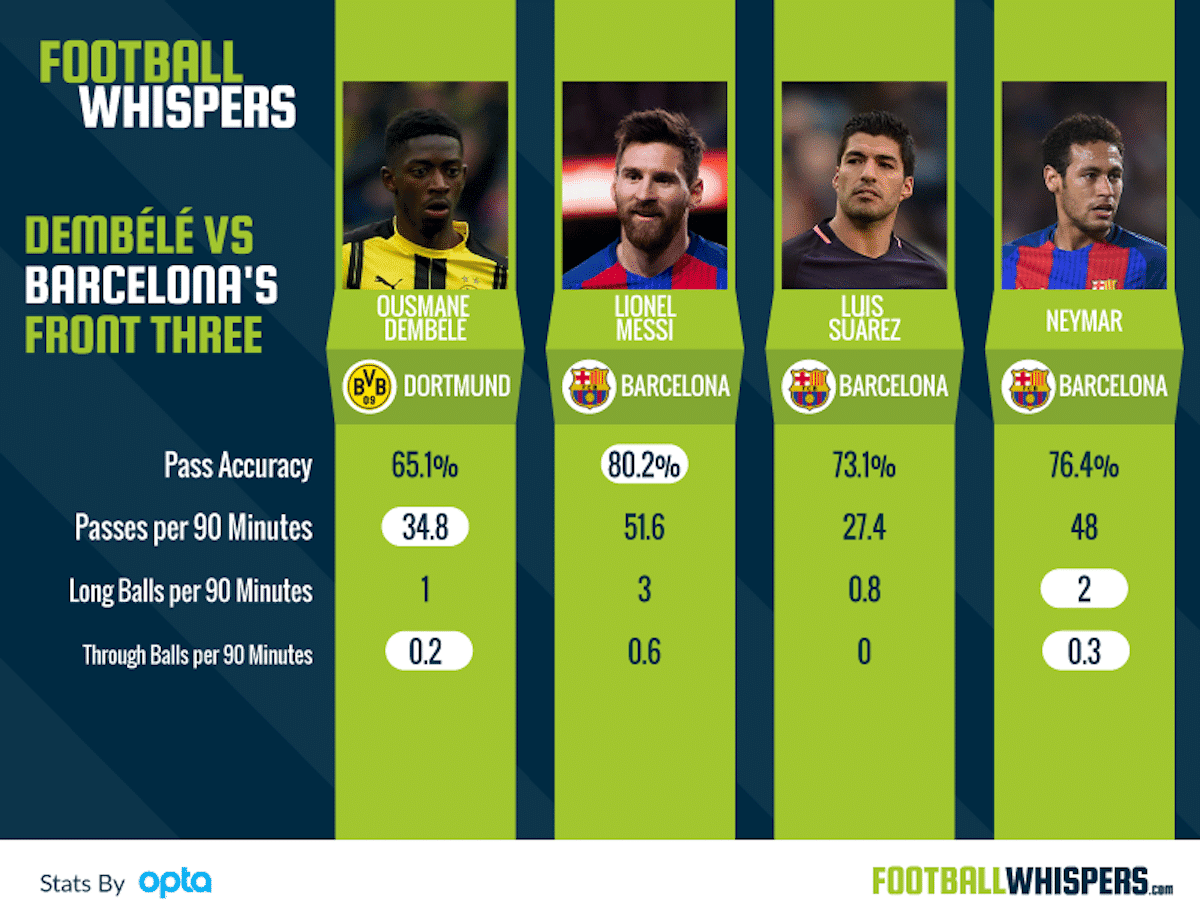 Enrique is set to depart the Camp Nou in the summer, citing a need for “rest” after an intensive three years at the helm of the Catalan giants. But regardless of who succeeds the former Celta Vigo and Roma boss, rapid and accurate circulation of possession will remain a core principle of the Spanish champions’ style; from Johan Cruyff’s “Dream Team” to the tiki-taka of Pep Guardiola, passing and combination play is part of the Barça DNA.

If Dembélé were to become a member of Barcelona’s frontline, he wouldn’t be expected to maintain a pass accuracy of above 90 per cent like Busquest and Iniesta, or like Xavi and Guardiola before them. Playing in a more advanced position means that there is less space to operate in, as well as a requirement to play more adventurous balls, meaning that the pass completion rate of attackers is inevitably lower than that of their midfield colleagues.

Even so, the teenage sensation’s 65.1 per cent pass accuracy in the Bundesliga this season ranks him behind Messi (80.2 per cent), Suárez (73.1 per cent) and Neymar (76.4 per cent), showing that he would perhaps need to improve in this area. However, at Barcelona he would be playing alongside a higher calibre of player, generally speaking; the ability of his team-mates to receive and control passes under pressure could result in an uptick in his pass completion rate.

Dembélé also completes fewer passes than both Messi and Neymar, with an average of 38.8 per 90 minutes against 51.6 and 48 respectively. Even though Barcelona average a marginally greater share of possession per league outing than BVB (62.3 per cent to 60 percent), this demonstrates that, proportionately, the South American duo are more involved in their side’s play than the former Ligue 1 standout. 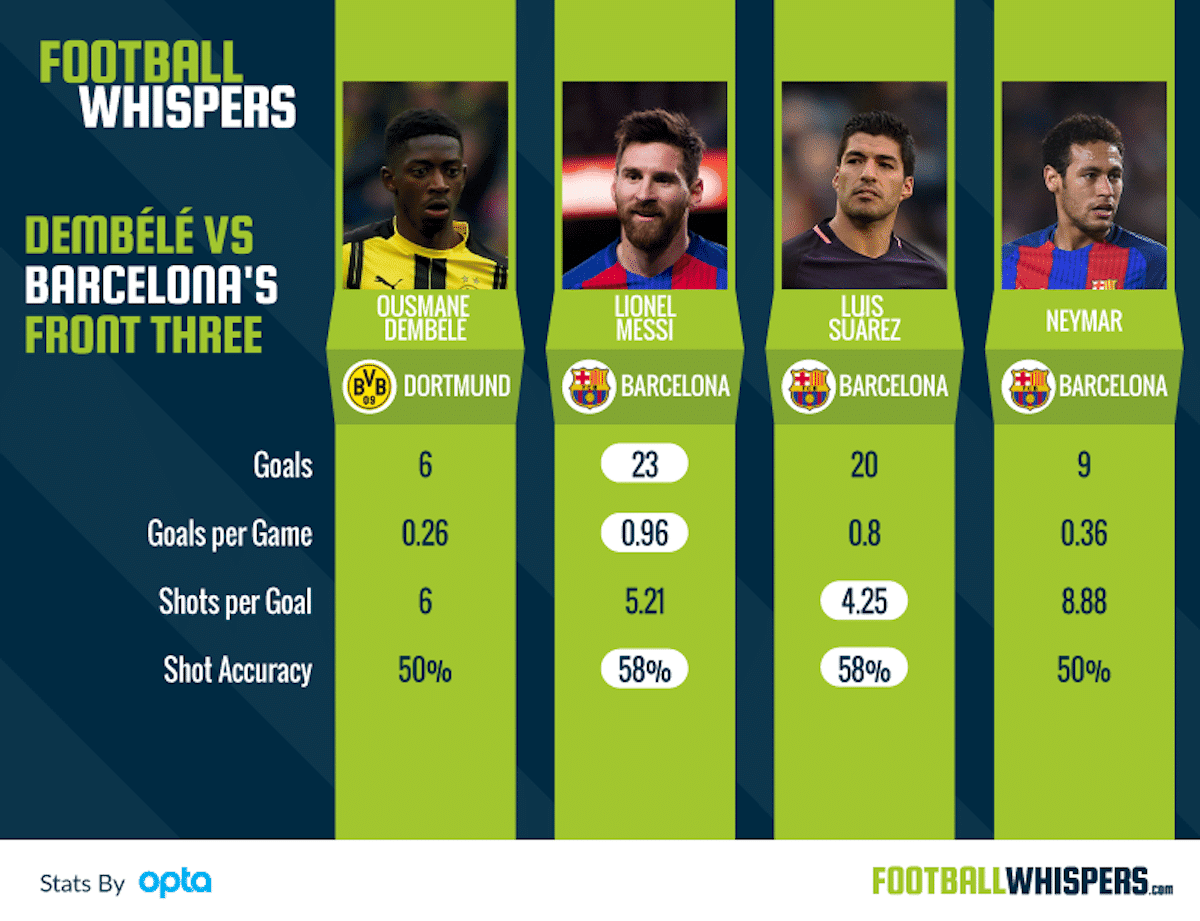 When it comes to goal-scoring, Dembélé falls some way short of the numbers the MSN are able to produce. Of the four players, Messi is out in front with 23 La Liga goals from 24 appearances, giving him a staggering average of 0.96 goals per game.

Dembélé has found the net six times in the Bundesliga this term, for a goals per game average of 0.26. However, Dortmund on a whole average 2.21 goals per outing, while the Blaugrana hit the back on the net 2.85 times per league match. So, although BVB’s No.7 does not score as frequently as the Barça trio, he doesn't benefit from as many chances at Signal Iduna Park as he would at the Camp Nou.

He does, however, have comparable numbers to Neymar in the scoring department. The Brazilian has found the net eight times this season for an average of 0.36 goals per game.

The Frenchman’s 50 per cent shot accuracy is also in keeping with the Barcelona superstars, level with Neymar and not too far behind the 58 per cent of Messi and Suárez. 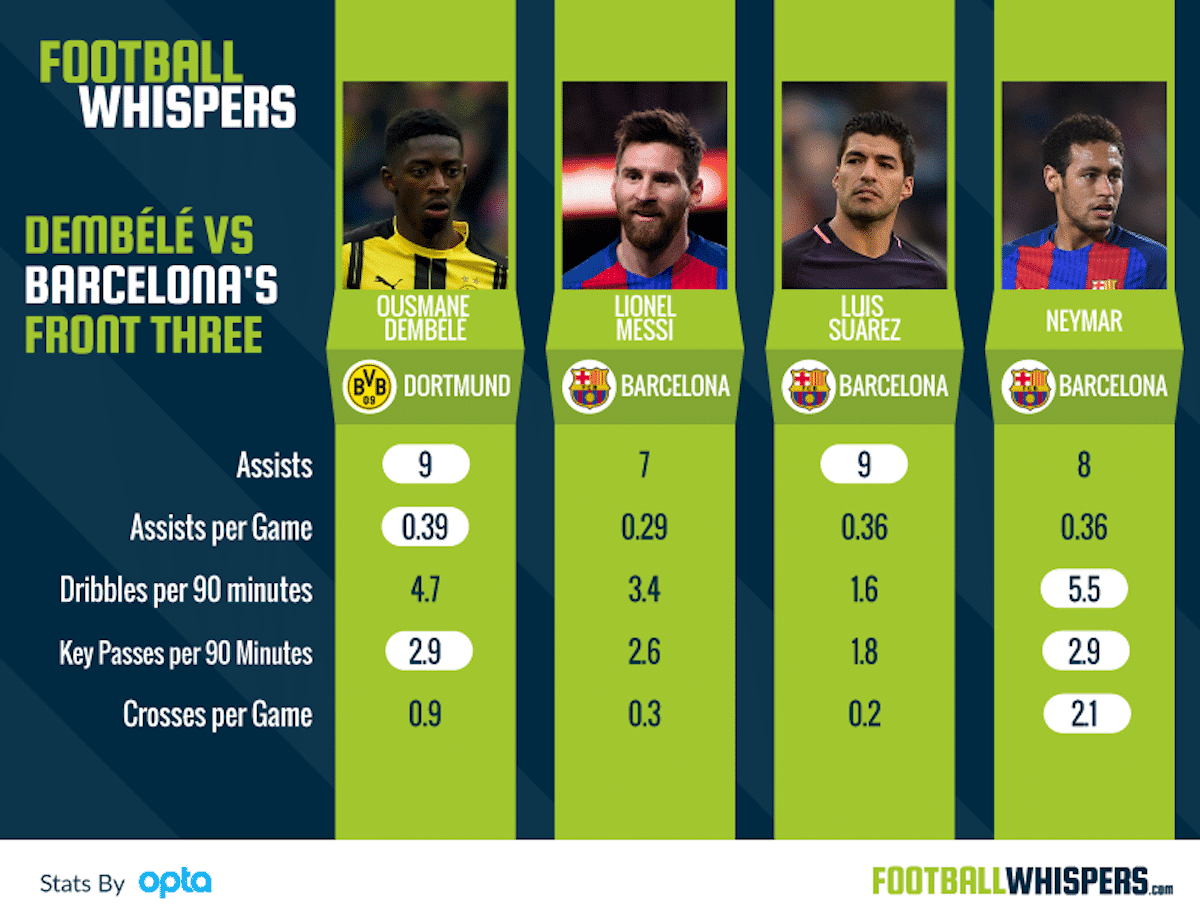 This is where Dembélé really comes into his own. Blessed with electric pace, mesmerising dribbling skills and razor-sharp vision, the 19-year-old is a nightmare for opposition defences.

He is also genuinely two-footed, which means, when dribbling, he doesn’t have any of the usual “tells” that betray which direction an attacker intends to move in, and is able to pass or shoot equally as accurately off either foot.

Of the four men, only Neymar (5.5) can better Dembélé’s 4.7 completed take-ons per game – a figure which seems him dribble beyond opponents more often than any other player in Germany’s top flight.

He also puts in more crosses per game than anyone bar Neymar, with 0.9 to the Brazilian’s 2.1, while Dembélé’s 2.9 key passes per 90 minutes has him tied with the former Santos man, and conjuring more chances than either Messi or Suarez (2.6 and 1.8 respectively).

With nine Bundesliga assists to his name, the teenager creates an average of 0.39 goals per game, more than all three Barça men — Suarez and Neymar come closest with 0.36.

All this goes to show that, while there are still plenty of rough edges to smooth out within his game, the teenager would not be out of his depth if a move to Barcelona materialises.

Whether playing alongside the MSN, or deputising for any of the Camp Nou’s world class superstars, Dembélé could an a new dimension to Barça’s already frightening attack.

Why Barcelona Miss Samuel Umtiti So Much When He Doesn't Play