Liverpool and Everton take each other on in the first Merseyside Derby of the campaign this weekend, and the clash sees a real contrast in managerial styles.

The former are led by Jürgen Klopp, a continentally renowned tactician who earned his reputation through high-tempo tactics that many termed ‘rock and roll football’, while the latter are led by Sam Allardyce, a former England national team manager who has made his career inspiring underdogs with innovative use of statistics.

Klopp discussed his opposite number in the build-up to the game, saying: “All Sam Allardyce teams are difficult to play. But we are in a good moment.” The ‘good moment’ he refers to is his side’s exceptional nine-game unbeaten run, during which they have scored 32 goals.

Everton, meanwhile, are resurgent under Allardyce having won their opening game under his leadership – a 2-0 victory at home to Huddersfield Town.

The players are already benefitting from his presence, with Tom Davies saying: “I've enjoyed it so far. He's dead straightforward…You know exactly what he wants from you and as a player that's what you need. There is no confusion and I'm enjoying it.”

Allardyce and Klopp have met on three occasions before and have an equal record against one another. While the former was manager of Crystal Palace he led the Londoners to a 2-1 win over Liverpool at Anfield in April 2017. He also earned a 2-2 draw at Anfield with Sunderland in February 2016. Klopp’s only win against his rival came against the Black Cats, with a 1-0 win at the Stadium of Light in December 2015.

In these three matches, statistical trends have emerged – no doubt fuelled by the tactical differences between the pair.

Allardyce’s teams have had less than 50 per cent possession on all three occasions, twice achieving less than 30 per cent. They also tend to have fewer shots, and fewer shots on target.

Evidently, while Klopp tends get his team to dominate matches against Allardyce, he is unable to convert that domination into genuine scoring chances. Hence, in terms of goals the aggregate score in their head to heads is 4-4.

In terms of overall records, Klopp holds the upper hand over Allardyce. As well as promotion to the German top flight with Mainz, he won two Bundesliga titles, one German Cup, and three German Super Cups with Borussia Dortmund. Allardyce, meanwhile, has won just one league title – the old English Third Division with Notts County – and two promotions – one each with Bolton Wanderers and West Ham United.

Over the course of his spells with three separate clubs in two different countries, comprising 711 games, Klopp’s win record stands at 49.4 per cent. Allardyce, over 1010 games in charge of nine clubs in English football, has a win record of 39.5 per cent.

A fairer comparison of the two can perhaps be found by taking away their previous records and focusing on how they have both fared since Klopp moved to the Premier League with Liverpool. 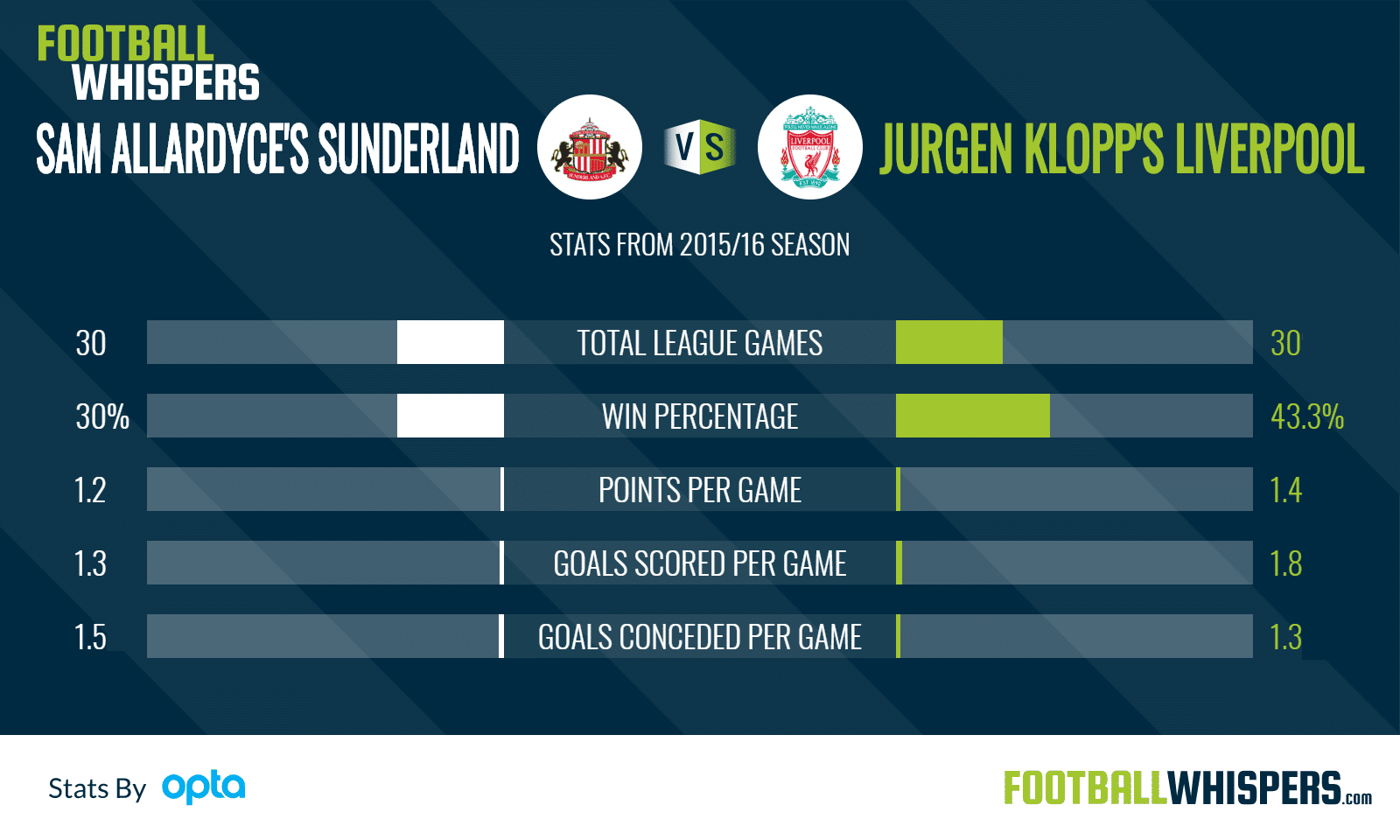 In the 2015/16 season with Sunderland, Allardyce won 30 per cent of his 30 league games in charge, earning 1.2 points per game. His side also scored 1.3 goals per game, while they conceded an average of 1.5 goals.

That same year, Klopp won 43.3 per cent of his 30 league games, earning 1.4 points per game. His Liverpool scored at a rate of 1.8 goals per game, conceding 1.3 per game on average. 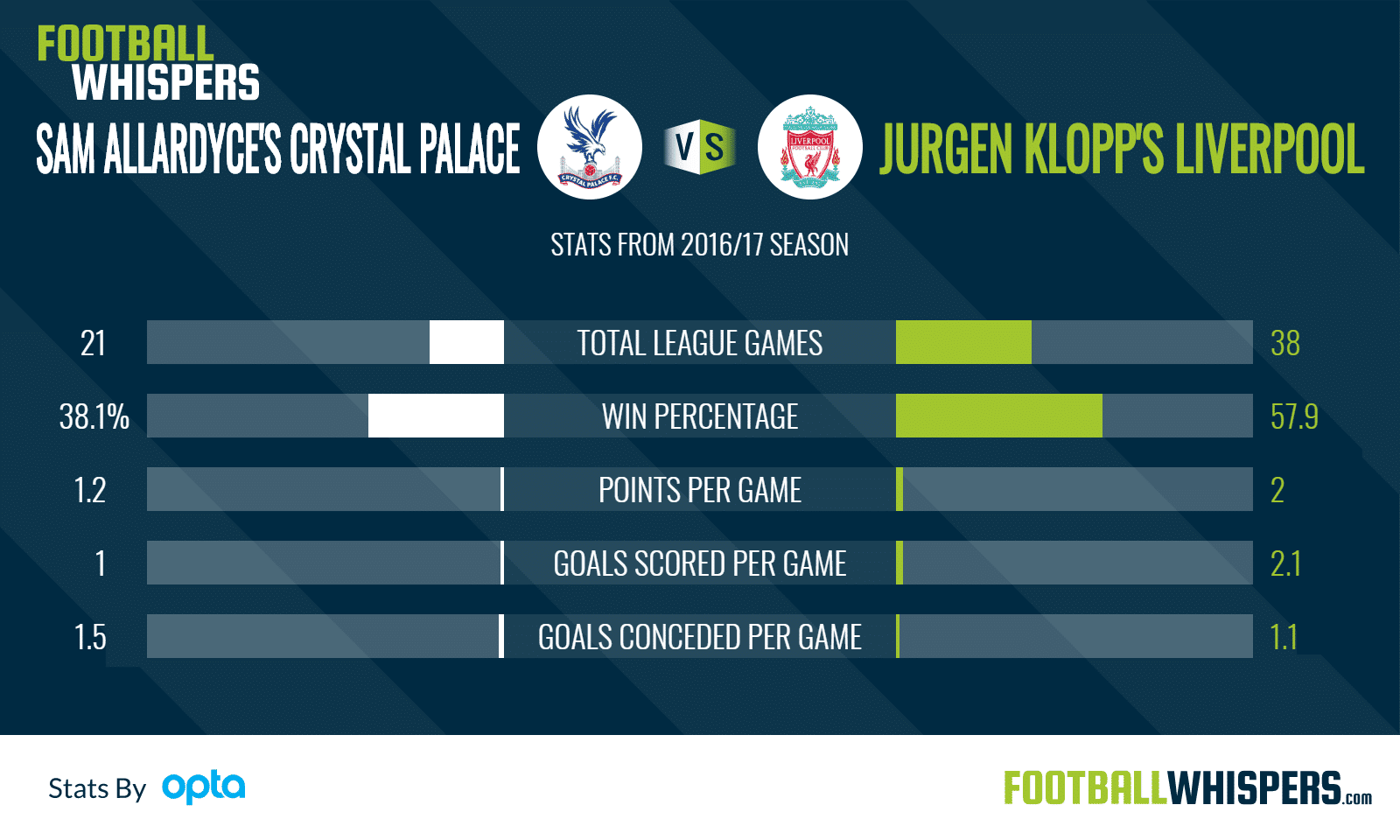 In the 2016/17 season with Crystal Palace, Allardyce won 38.1 per cent of his 21 league fixtures, earning 1.2 points per game – the same as his rate with Sunderland the previous term. His scored one goal per game and conceded 1.5 per game.

Still with Liverpool, Klopp won 57.9 per cent of his Premier League games, earning two points per game. On average, his side scored 2.1 and conceded 1.1 per game.