Out since November with an ankle injury, Eric Bailly has reportedly returned to training this week and could be fit to face Sevilla in the first leg of Manchester United‘s Champions League last-16 tie on Wednesday.

The Ivory Coast centre-back was last seen in the Red Devils' 1-0 defeat to Chelsea at Stamford Bridge on November 5, with his layoff lasting much longer than initially anticipated.

With Bailly out of the side, Chris Smalling and Phil Jones has been José Mourinho's most-used central defensive pairing, with both coming in for strong criticism of late after sub-par performances in defeats to Tottenham Hotspur and Newcastle United.

Reports suggest Mourinho has now lost faith in the England duo and will look to ship them both out of Old Trafford in the summer. But, in the meantime, will Bailly's return cure United's defensive issues? The statistics tell an interesting story.

Having been out for so long, the sample size for Bailly's stats this season is relatively small, with Jones and Smalling both playing around 1000 minutes more than the man signed from Villarreal in the summer of 2016.

As the below graphic shows, Bailly is only able to match Smalling when it comes to tackles per 90 minutes in the Premier League, while he trails both Smalling and Jones in interceptions per 90 and successful aerial duels per 90.

And although Bailly's tops Marcos Rojo in the interceptions and tackles numbers, the Argentinian defender has played even fewer minutes than the Ivorian so far this term.

Bailly is also tracking behind Phil Jones when it comes to passes per 90 and pass accuracy, which should perhaps not be too much of a surprise given the Englishman's experience as a midfielder and comfort on the ball.

But this season's stats don't show Bailly at his best. Last term, with the 23-year-old in peak form and fitness, his defensive numbers were significantly more impressive – 2.6 tackles and 2.6 interceptions per 90 – and sustained over a period of 2060 minutes.

When fit and firing, Bailly is by far United's most effective defender. 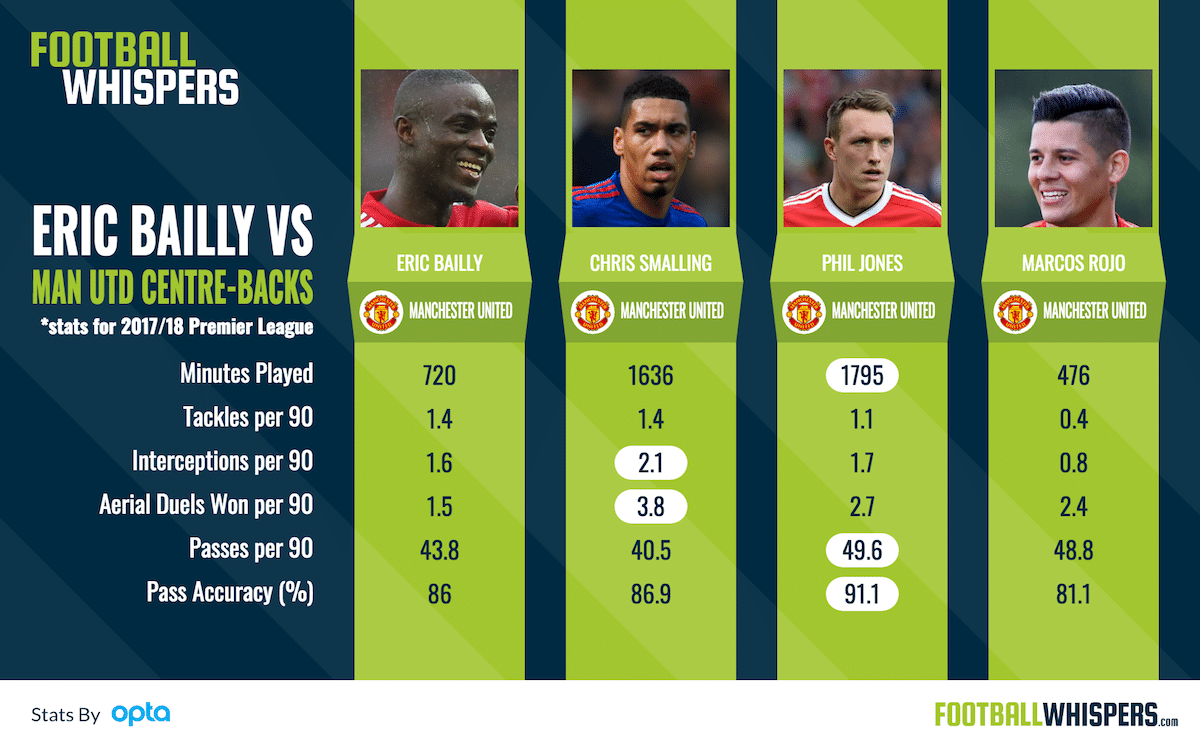 What's more, many of the attributes Bailly brings to the table are not easily quantified. Unlike any of the other central defenders at Mourinho's disposal, the former Espanyol man has tremendous recovery pace, which not only bails him out of trouble on occasion, but also acts as an insurance policy, sweeping up to atone for the errors of others.

As such, Bailly's defensive colleagues are less on edge knowing that they effectively have an extra line of defence should they slip up.

He is also a strong one-on-one defender, often stepping up from the defensive line to apply pressure to the man on the ball in the defensive third, suitably aggressive without overspilling into recklessness.

He won't solve all of the issues currently concerning Mourinho's men, with midfield imbalance and a lack of attacking structure equally as troubling, but Bailly's return is a huge boost for the backline.