Don Revie was one of the greatest club managers of his time. His teams played with flair and skill, not to mention a large helping of passion, as he won two league titles with Leeds United, an FA Cup, the European Fairs Cup, twice, and a League Cup; and probably should have won more. But incredibly his achievements as a manager are often overlooked.

It’s a sad fact that the man who transformed Leeds United from an unfashionable and ailing Second Division outfit into one of the most revered club sides in European football is probably best remembered for his squabbles with Brian Clough and high profile fallings out with the FA, rather than his epic achievements as a manager.

Born in Middlesbrough in 1927 Revie enjoyed a largely successful playing career, starting out at Leicester Revie then moved to Hull, before signing for Manchester City where he would enjoy his best days as a player.

On the pitch, Revie made up for any lack of natural talent or ability with a faultless work-ethic and an insatiable desire to learn from those around him. He wasn't an aggressive or confrontational, instead using his intelligence to out-wit opponents, surprising really seeing the reputation that Revie and his teams would earn in later years.

Revie was named the Football Writers Association Footballer of the Year in 1955 and would feature heavily in England’s famous 7-2 thumping of Scotland at Wembley that same year, just one of only six England caps he would be awarded in his career.

But after something of a disagreement with Les McDowall, his manager at Manchester City during their 1955 FA Cup final defeat to Newcastle, Revie fell out of favour at the club and never quite regained the trust of the City board and three years later he was told by his employers that he had no future at Maine Road.

It might not have seemed like it at the time, but as things turned out, it was probably the best thing that ever happened to Revie as he was eventually transferred to Leeds United in 1958 – a move which would change the fortunes of both parties in a way that nobody could have ever predicted. 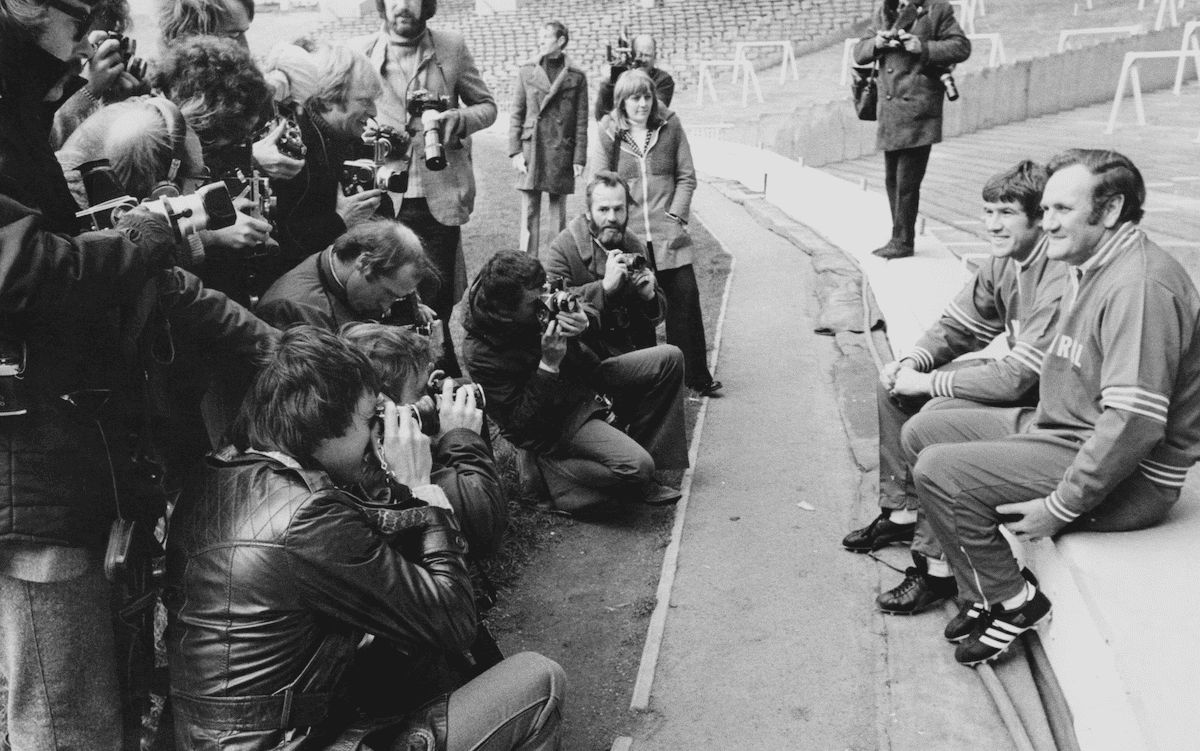 The previous season the club had only just avoided relegation but it was only a stay of execution as they did go down just 12 months later. In an effort to turn the tide the club, somewhat surprisingly, pinned their hopes on a man who had managerial aspirations and appointed Revie as their new player-manager following the resignation of Jack Taylor.

The decision to appoint him as the club’s new player-manager in 1961 didn't go down too well in ll honesty, but as it turned out Revie would eventually become one of the greatest managers in the history of the club.

He immediately began to implement massive changes as he set about making Elland Road the top sporting destination in a city obsessed with cricket and Rugby League.

This included introducing dietary restrictions on his players, ensuring his team only stayed in the best hotels and even changing the club’s kit from the traditional blue and yellow to an all-white strip in the style of Real Madrid.

He also made it his business to take an interest in the lives of everyone at the club, right through from the backroom staff to the star players; nobody was bigger than Leeds United in his eyes.

Revie also used his willingness to learn from those around him to introduce changes around the club and placed a firm emphasis on youth; ruthlessly getting rid of anyone he thought might be surplus to requirements or not up to the job in hand.

The new manager also knew that without significant investment in youth players his team would struggle against even the more modest sides in English football, fortunately for him, his chairman Harry Reynolds shared his vision and was only happy to back his new tracksuited boss.

It wasn’t long before he had developed a youth policy at the club, with notable graduates being Eddie Gray, Norman Hunter, Peter Lorimer and Paul Reaney – all of whom would go on to become Leeds United greats.

In his first season at the helm, the club finished in 19th place in Division Two as attendances dropped to their lowest levels since the club were inducted into the Football League as, aside from the likes of Jack Charlton and Billy Bremner, his squad was comprised mostly of players who had seen better days.

In an effort to concentrate his efforts on the job in hand Revie hung up his playing boots to focus solely on management at the start of the 1962/63 season, his actions proved to be a masterstroke as Leeds finished fifth that season and won the Second Division, and promotion, the year after.

Looking to fill the influential void he, himself, had left in the Leeds side Revie quickly employed the services of a confident Scot by the name of William Bremner. It was a masterstroke and the player who had come through the youth ranks would go on to become the catalyst in what Revie was looking to achieve.

With the formidable centre-half pairing of Jack Charlton and Norman Hunter, along with a certain Billy Bremner in the middle of the park, and a front line of Eddie Gray and Peter Lorimer, Leeds had been transformed.

They took the top flight by storm on their return, finishing runners-up to Manchester United and losing the final of the FA Cup to Liverpool in what would have been the most incredible of doubles. 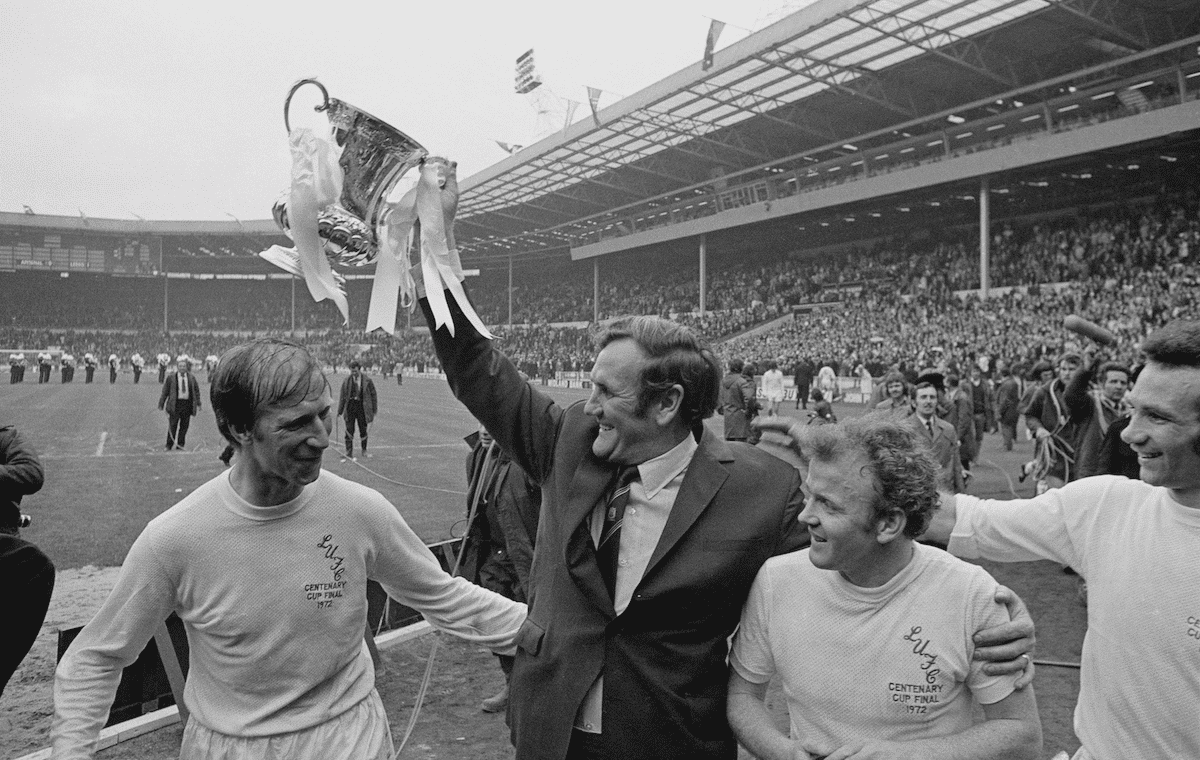 Between 1965 and 1968 Revie's Leeds reached the FA Cup semi finals twice, won the League Cup, and won the Inter-Cities Fairs Cup, as well as securing four consecutive fourth-place finishes including being runners-up twice – an incredible achievement considering where they had been just a couple of years before.

The progression continued at pace and it was only a matter of time before Leeds were crowned the best team in the country,  winning their first league championship in 1969, thanks to stout defensive organisation, a solid midfield and a ruthless front line; not to mention a fair bit of gamesmanship and brute force. The 67 points they clocked-up that season was a Division One record until 1979 and just two defeats in the league all season was a new low in a season that consisted of 42 games.

Leeds secured the title at Anfield in front of 10,000 of their travelling fans and also received a seven minute ovation from the Kop who had just seen their heroes pipped to the title themselves – an acknowledgement that meant so much to Revie.

However, rather than cementing their place at the top of the English game for years to come following their title success, another series of painful near misses followed as they finished runners-up three years in a row, often when it seemed that it was easier to win the title.

But in 1974, the club were crowned champions once again, finishing five points ahead of Bill Shankly’s Liverpool and confirming Revie’s place as one of England’s greatest club managers, while winning over some of their doubters in the process.

This was a watershed moment for Revie’s Leeds as their critics finally started to appreciate that they were no longer just relying on brute force and underhand tactics; something they had been accused of when the team won their first league triumph five years before.

The title that year turned out to be Revie’s swan song at the Elland Road club as his record in the game had seen his stock go through the roof. It wasn’t long before his country came calling as the FA searched for a candidate to take on the job of England manager after Alf Ramsey’s men had failed to qualify for the 1974 World Cup.

Like all great dynasties, many of the team that had brought so much success to Leeds were fast becoming a spent force. Players like Bremner, Lorimar, Jack Charlton and Eddie Gray were past their best and the side was in need of a major overhaul. Revie was more than aware of this and didn’t need asking twice when the England job became available. 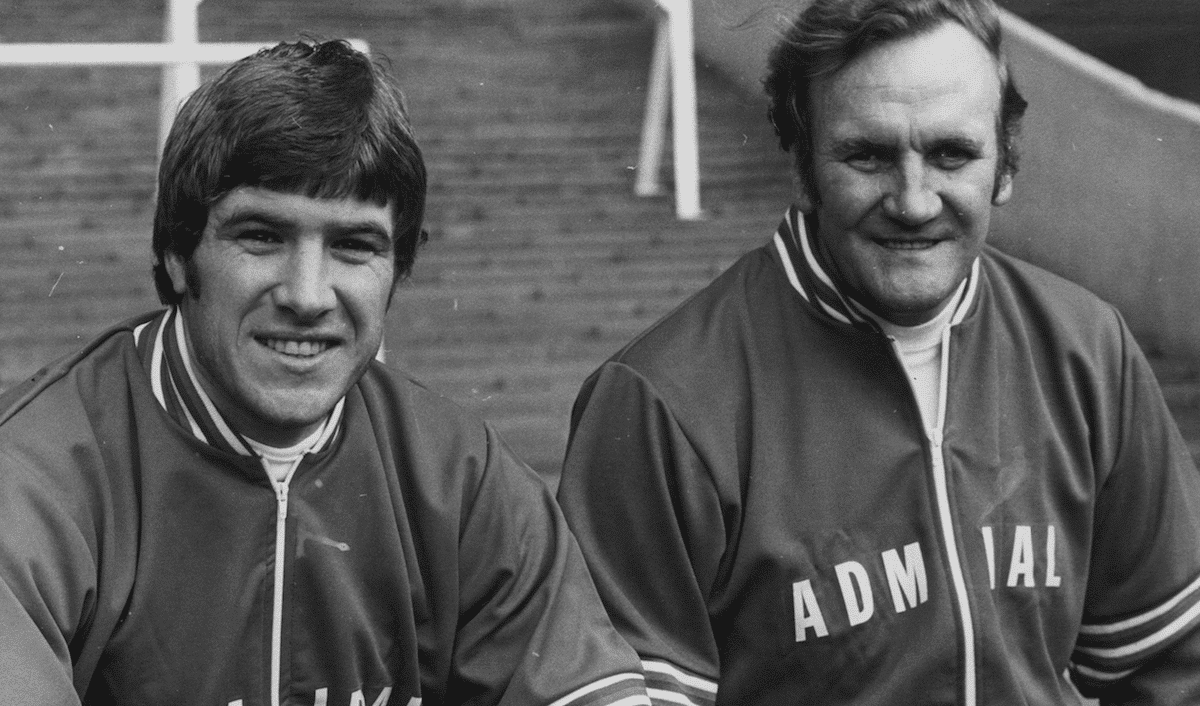 Having achieved so much at Leeds, Revie was the standout candidate for the role, though it proved to be something of an unpopular decision in the eyes of the general public, who favoured the charismatic Brian Clough over the more reserved Revie; not the first time the two men would polarise opinion.

While Leeds, somewhat surprisingly, chose Clough – a man who had constantly criticised the way the club had played in the past and even called the side cheats – to fill the huge shoes that Revie had left, their former boss set about trying to turn around the fortunes of the national side in the same way he had with Leeds in the early 1960s.

But whereas club management allowed him time with his players to build relationships, work on shared beliefs and study the opposition in meticulous detail, the sporadic nature of international management was simply not the same.

During his time at Elland Road, Revie demanded complete control in order to achieve his aims, something which simply wasn’t an option in the England job and confined by bureaucracy, not to mention long-running battles with FA chairman Sir Harold Thompson, Revie was something of a flop.

Failure to reach the European Championships finals in 1976 was followed by elimination in the 1978 World Cup qualifiers and when the FA refused to accept his resignation, Revie went to the press to express his desire to leave and claim a lucrative pay out from the Daily Mail, a decision which only made things worse.

“I sat down with my wife, Elsie, one night and we agreed that the England job was no longer worth the aggravation,” he told the paper. “It was bringing too much heartache to those nearest to us. Nearly everyone in the country wants me out. So, I am giving them what they want. I know people will accuse me of running away, and it does sicken me that I cannot finish the job by taking England to the World Cup finals in Argentina next year, but the situation has become impossible.”

As if adding insult to injury, just days after leaving the England hot-seat Revie announced that he was heading to the Middle East and accepting an offer to become the new UAE manager. The deal saw him sign a £340,000 four-year contract, but ultimately the move damaged his reputation in England and the FA wasted no time in suspending Revie from football for ten years.

He left the UAE coaching role in May 1980 before spending a number of years managing domestic sides in the Arabian Gulf League and the Egyptian Premier League and eventually returned to England in 1984 and though he never managed again he was about to face the biggest battle of his life.

Revie was diagnosed with motor neurone disease in May 1987 and publicly announced his illness in August of that year. He made his final public appearance on May 11, 1988 at Elland Road at a charity football match held to raise money for research into the disease, but he was the shadow of his former self.

The man who wasn’t used to losing was eventually defeated in his ultimate battle on May 26, 1989, and on the same day that Michael Thomas’s last-ditch goal won the title for Arsenal at Anfield, just as his Leeds side had done 20 years earlier, Revie died peacefully in his sleep surrounded by his family.