Over the past couple of years, Dele Alli has regularly been derided by many.

The 23-year-old exploded onto the scene during the 2015/16 season and over the next three campaigns netted 46 goals across all competitions.

However, the 2018/19 season saw him notch just seven times. With Spurs struggling domestically, Alli’s performances were heavily scrutinised. The fact his position had been tweaked wasn’t taken into account, at least not by those in the mainstream media. He appeared to be out of form and, in the eyes of many, out of time.

His place in the starting XI was called into question. Some even thought Spurs should cash in on the one-time Real Madrid and Manchester United transfer target. Injury delayed his start to the 2019/20 campaign and his first appearance didn’t arrive until the 2-2 draw with Arsenal in September.

Alli had to wait until his sixth appearance of the campaign to taste victory. Spurs weren’t performing well but the fact these poor results coincided with Alli’s involvement in the starting XI only seemed to strengthen those claims his time with the club was up.

But then José Mourinho replaced Pochettino. The Portuguese tactician has a way with players: He’s either a fan or he isn’t. If you fall into the former category you’re part of his inner circle. Fall into the latter and you’ll quickly become a pariah.

The jury was out in regard to which category the MK Dons academy graduate would fall into. On paper, Alli appeared to be perfect for Mourinho’s revolution. But football isn’t played on paper and trying to read the former Manchester United manager is near impossible.

It quickly became apparent, however, that Mourinho intended to use the versatile midfielder. Speaking to the media after one of his first training sessions as Spurs boss, the 56-year-old revealed he quizzed the England international.

Though we’re only three games into the Special One’s reign, Alli has already emphatically backed up his answer. He followed up an assist against West Ham United with goals in wins over Olympiacos and Bournemouth as the era of Mourinho got off to the perfect start with three wins from three. 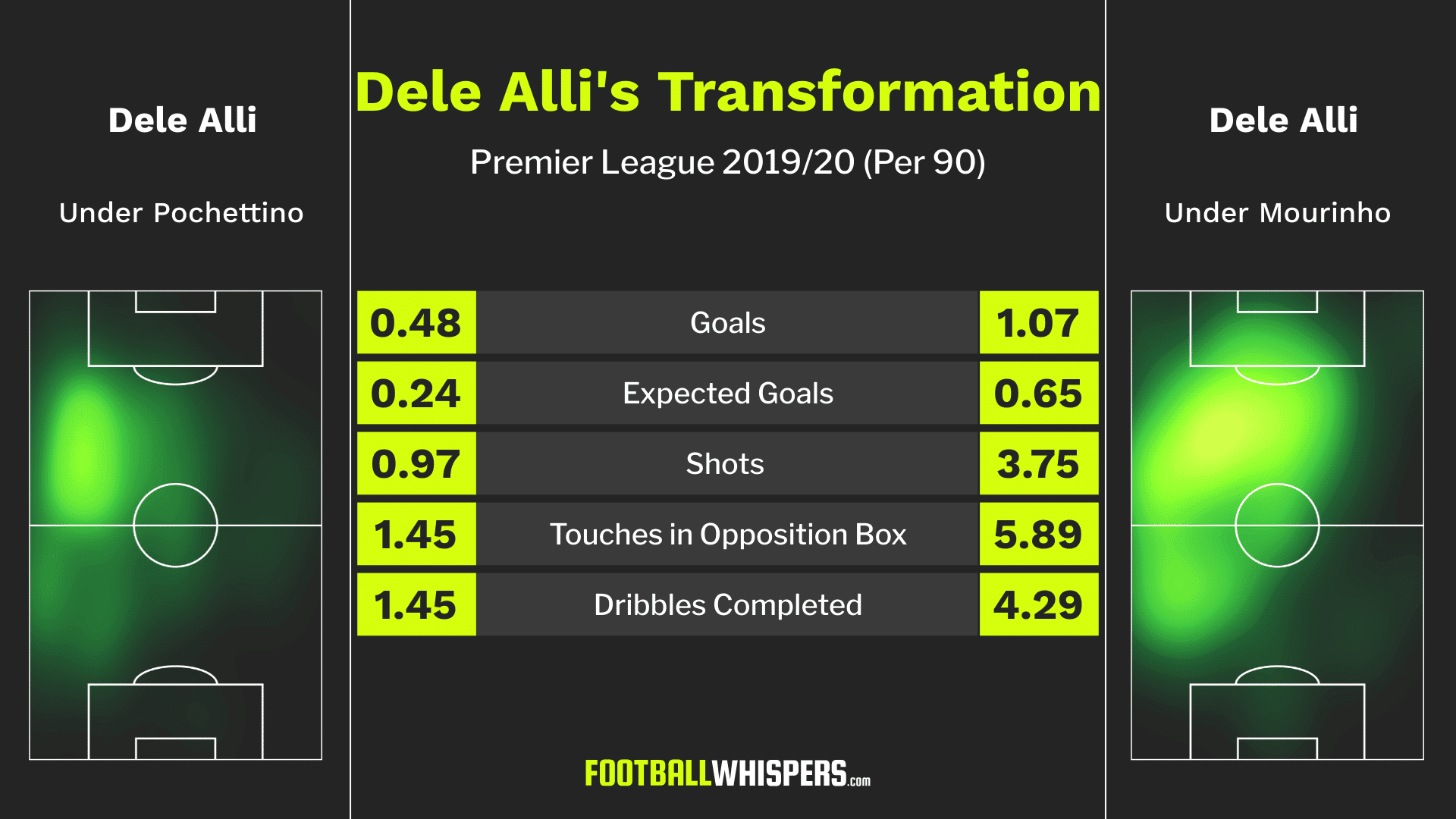 Mourinho hasn't done anything remarkable with Alli. He's just freed him from the more defensively minded role he was in under Pochettino and given him the license to get forward.

Match of the Day highlighted it on Saturday night. During Alli's most prolific season, he often timed his run between right-back and centre-back to perfection. These areas of the pitch are usually exploited by wide forwards but with the Spurs No.20 doing it from more central areas it was causing problems.

His performances against West Ham and Bournemouth screamed vintage Alli. With the England international dropping between the lines before bursting into space behind. He was, essentially, acting as a second forward.

It's backed up by his stats, too. The sample size isn't the largest but Alli's goals per 90 record has more than doubled and his expected goals average has nearly tripled under Mourinho. The 23-year-old has gone from having 0.97 shots to 3.75 and Spurs have found their groove in the final third once again.

He's heavily involved in the box, averaging close to six touches per 90 compared to the 1.45 he was managing under Pochettino this season. Perhaps the most interesting stat, however, is the dribbles completed one. Before Mourinho arrived, Alli averaged 1.45 per 90. Since the appointment of the former Porto boss, the England international has upped that to 4.29.

With Spurs playing more of a counter-attacking game, Alli has more opportunities to beat a man and he's thriving in that role. Given he's not drawn to the ball, he's perfect as this hybrid No.8/No.10 position he's being used in once again. He can do the dirty work required in a Mourinho system but in reality, he's there to facilitate. Alli supports the midfield and the attack.

It's the role Paul Pogba could've played for Mourinho at Manchester United if he wasn't so interested in being in possession. The World Cup-winner wanted to be the player to play the pass and not be the one to finish off a move. His reluctance to get beyond the striker limited what he could do for his manager.

He ended up catching the eye for Ole Gunnar Solskjær as a playmaking No.10 and not a goalscoring one, with the majority of his goals coming from the spot.  Alli falls into the latter category and it's why he's excelling for Mourinho so far.