David Moyes must feel like a dead-man walking. His team are bottom of the Premier League, without a win in 10. They are conceding an average of two goals per game and have scored just seven. Hull City have conceded more, but they’ve picked up two victories. They’ve lost six straight, but still have five more points. The Tigers are perhaps in just as much trouble, but at least they have had some reasons to cheer this term. The same can’t be said for the North-East side.

When Sam Allardyce was battling relegation last season, the former Bolton Wanderers coach signed Lamine Kone and Whabi Khazri from Ligue 1, to try and turnaround their fortunes. Kone, the powerful centre-back, has had his well-document problems, with many fans believing he’ll be on his way out in January. Khazri on the other hand has looked out of sorts.

The Tunisian apparently wasn’t fit enough to take part in the opening few weeks, playing just 69 minutes over the first six fixtures. Subbed on against Everton and Spurs, he made his first start against West Brom in the 1-1 draw. Khazri made his name in France, taking his first steps with SC Bastia before moving up with Girondins de Bordeaux.

Usually played on the left, he was always more efficient playing as a winger. Allowed to cut onto his right-foot, he would come inside to devastating effect. In 189 French league games, he would provide 38 assists and score 42 goals. He gained a reputation as a set-piece specialist, something that Mackem fans got a glimpse of last season in their bid for survival.

Playing against Arsenal early on Saturday, Moyes started with Khazri on the right of his midfield. With the way Arsene Wenger plays his football and the expected domination from the away side, Sunderland would always have a chance to hit on the counter, something that Khazri is very good at, however, playing him in an unnatural position was far from ideal.

In 113 of Khazri’s appearances in Ligue 1, only 14 of them came on the right. Asking him to pick the ball up on the opposite flank, you are instantly taking way one of his most natural movements. No one in the Sunderland team touched the ball more than the Tunisian on Saturday, but he was picking it up in an area where he is not as effective. There’s no point continually giving a player the ball if he’s not in the right situation to make things happen. 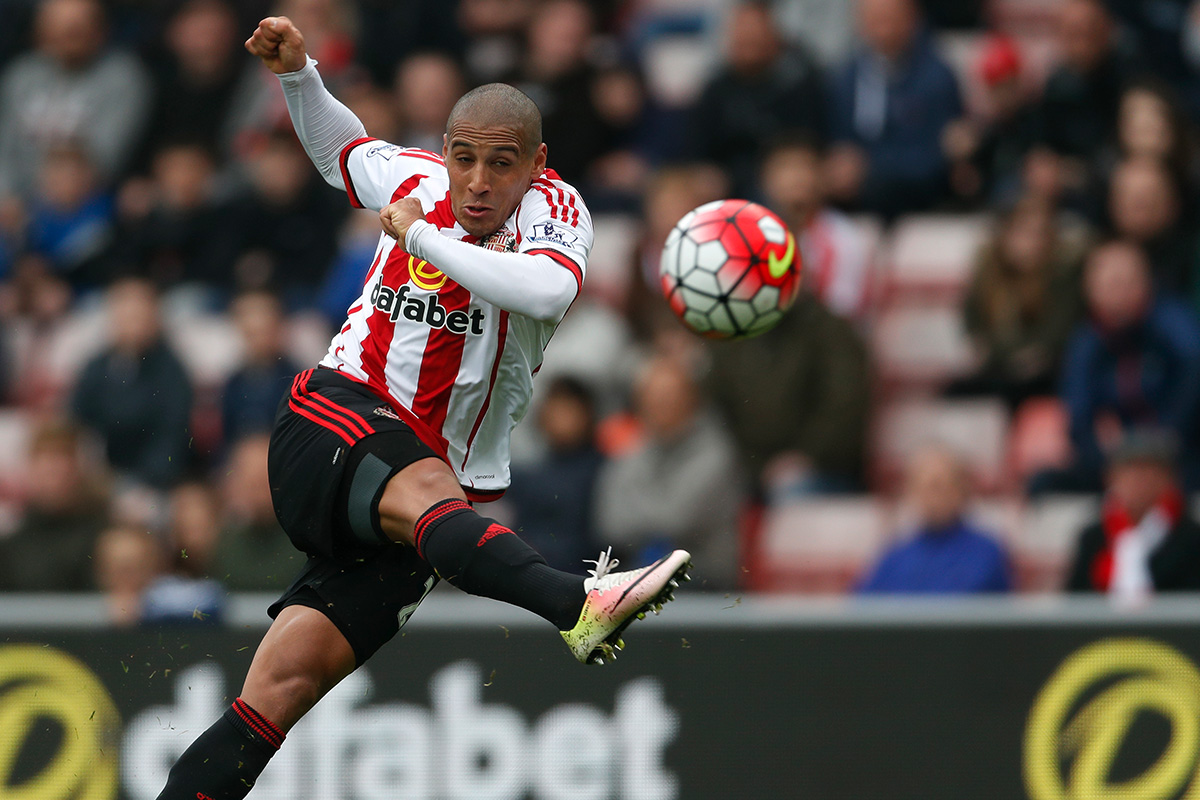 In truth, he’s not losing the ball any more than he has ant any time during his career. For Bordeaux, in his last full season and the campaign where he moved to Sunderland in January, he was dispossessed 2 and 2.7 times per game. At the Stadium of Light he has averaged 1.9 last term and 2 again this season. You are put under more pressure in the Premier League, so the fact his numbers have stayed similar suggests he has actually improved his ball retention.

What has gone done since his move to England is his shots per game and key pass numbers. For Bordeaux it was up over 2 and 2.4 strikes and in his last four months at Les Girondins he averaged 2.7 key passes per game. That’s dropped to 1.3 for both this season. Some of that decrease could be related to how often he is allowed on the ball compared to in France. His passes went from 28.3 in 2014/15, 29.4 for Bordeaux last term and then 23.4 for Sunderland to 19.7 in the games he has played under Moyes.

He’s always been a scrappy fighter. In France, your attacking players aren’t expected to defend, but Khazri would always chase back and make the effort. Before moving to England he averaged 2.1 tackles and 0.7 interceptions per game. If you look at another winger, like Paul-Georges Ntep at Rennes, he averages 0.9 tackles and 0.1 interceptions. It’s just not part of their game, so it’s a credit to the 25-year-old for what he puts in.

It’s clear that something isn’t right this campaign as his tackles are down to 0.7. Perhaps it’s attitude, or his disappointment at playing in an unfamiliar role. Far too often for Sunderland, the gap between Khazri, the other midfielders and Jermaine Defoe is too big. Even if the centre-forward is able to hold up the play, it’s too easy to lose possession, rather than bring his team into play.

At Bordeaux, one of Khazri’s biggest strengths was playing off of the front man. Shifting the ball into feet, making runs close to the forward and looking for quick passes around the box. Khazri isn’t going to beat you off the dribble, he’s not going to consistently win with his pace. It’s drive, determination, movement and skill. That’s his main assets, that’s how you need to play him. To make it work, Moyes needs to find a way to get Khazri on the left-wing, give him licence to get on to his right and put him in a position to create as close to the goal as possible. That’s what Allardyce hoped to get from him, as he explained once the signing was complete.

“It's the hardest place to produce that quality, so if he's got that quality in the final third which helps us provide and score more goals, then he'll be a massive bonus to us – as in the past Youri Djorkaeff particularly, in a similar position, and Jay-Jay Okocha provided in my Bolton time.”

Sunderland are always going to need players that can fight and scrap, that’s the key to any relegation battle. However, you always need that extra level of skill too. That’s what Khazri brings, but he can only be effective if used in the right area. There is no point trying to fit a square peg in a round hole and asking it to save your season. If that’s Moyes only way of thinking, it’s going to be a long, dark few months for the Black Cats.

Keep up to date with Sunderland transfer rumours