The entire Lord of the Rings trilogy with a few breaks to stock up on snacks. The Dark Knight trilogy and the Superman vs Batman film if you missed the post film scenes.

That’s how long Conte’s new look defensive system managed to go without conceding a goal. When Christian Eriksen fired home after 11 minutes on Saturday Chelsea’s run of six consecutive clean sheets, and 601 minutes without being breached, came to an emphatic end.

Pre-match it was billed as two tactical managers going head-to-head with Conte looking to mastermind Tottenham’s first Premier League loss of the season and a lot of intrigue surrounding whether Pochettino could be the man to bring Chelsea’s clean sheet streak to an end. The neutral wasn’t disappointed.

The onus was on Pochettino to break down the Chelsea defence and he went about deploying tactical tweaks in an attempt to do so. The most noticeable was his use of Heung-Min Son. The wing-back system which Conte deploys usually means the oppositions wide players are pinned back and before you know it the striker is isolated and teams can’t get a foothold in the Chelsea half of the pitch. However, Pochettino had Son hold his attacking position in an attempt to stop the right wing-back, Victor Moses, from influencing the attack. Moses is a key part of the Chelsea system and pushed on to support the attack often leaving Son in attacking areas on his own. 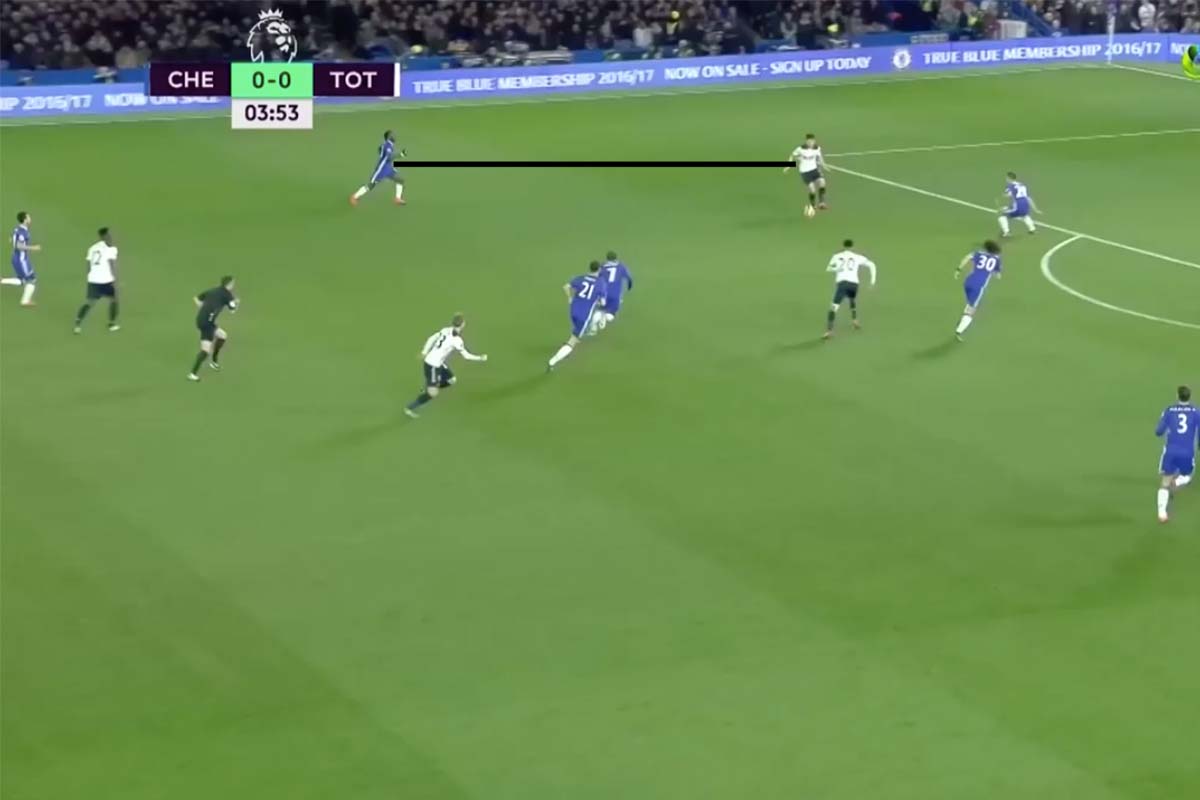 The picture above shows Son receiving the ball. Chelsea are fortunate that the South Korean’s touch is wayward and takes him away from goal because a better one means he’s 1 v 1 with Cesar Azpilicueta with Victor Moses having a lot of ground to make up. 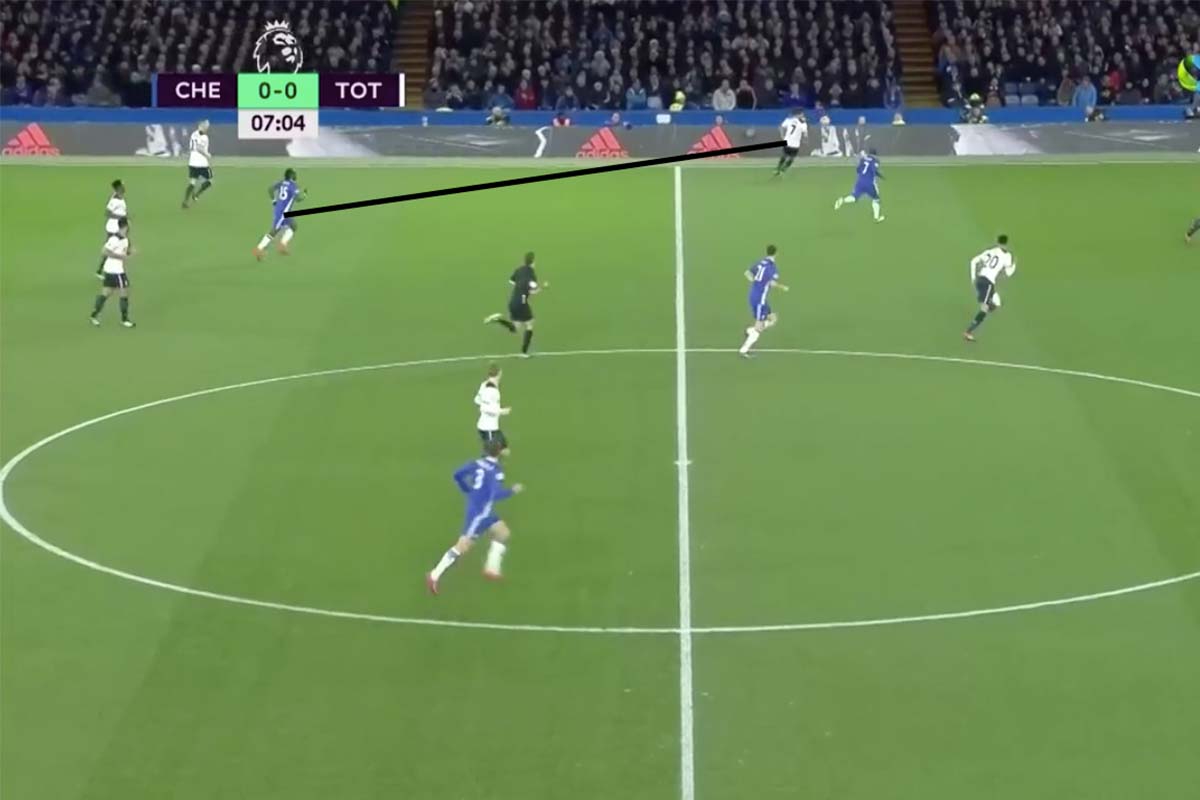 Again we see Son pick the ball up and Moses, who had been supporting the Chelsea attack before the ball was turned over, is nowhere near the Spurs number 7 meaning Ngolo Kante has to get across to cover. 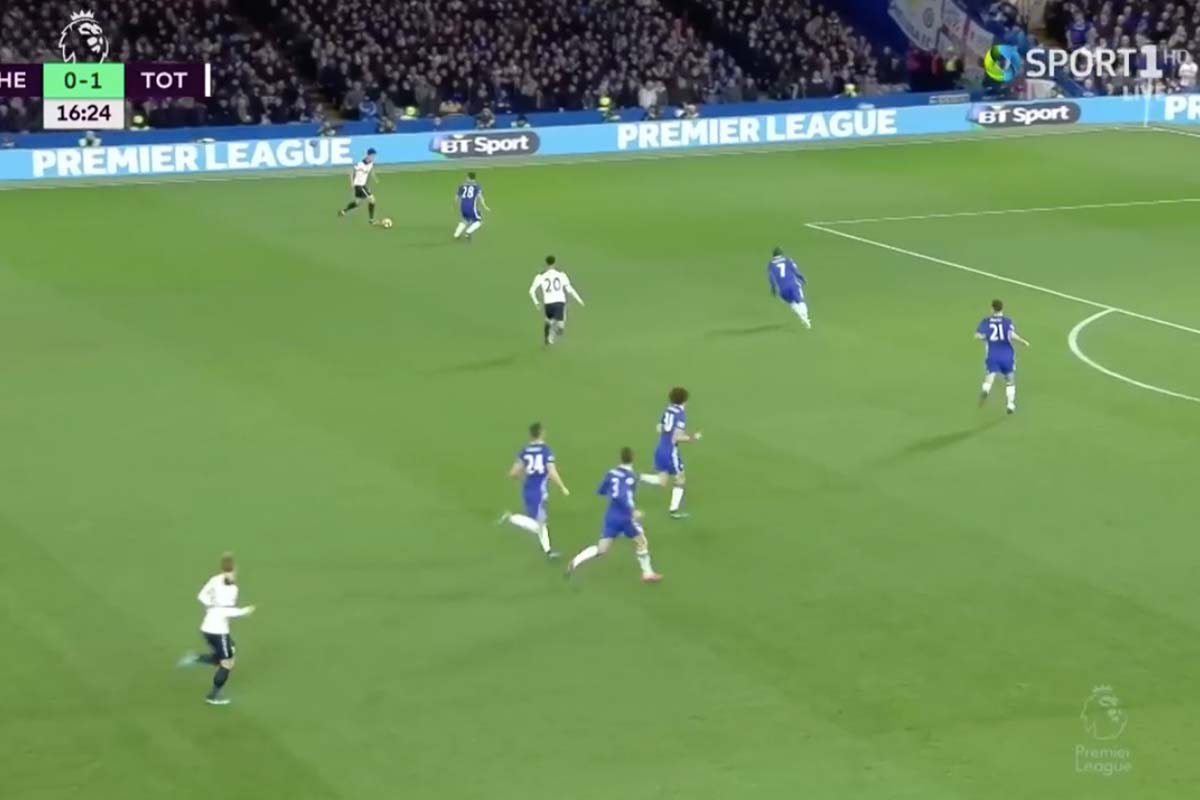 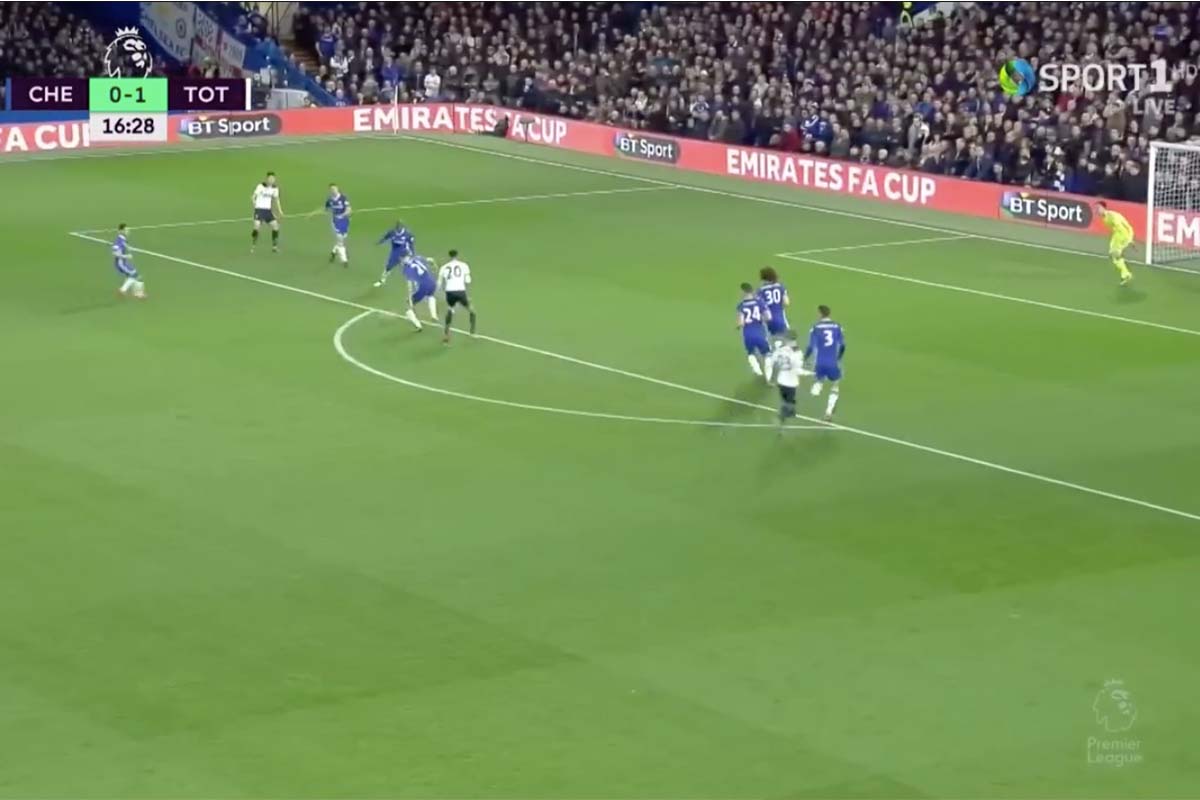 In the first picture Son is 1 vs 1 against Azpilicueta after Spurs turn defence into attack. He’s looking to isolate the Chelsea centre-back and they beat him with trickery as he looks to drive into the penalty area. The Spaniard can’t dive in so just does his best to hold him up so his teammates are able to get back. The second picture is the first time Moses comes into picture during this phase of play. Chelsea eventually clear the ball after getting enough men back to cover but it was clear Pochettino though Son could be a danger down that left side as they looked to exploit the fact Moses, for all of his fine form this season, isn’t a defender.

In a cruel twist of irony it was this tactic/instruction that lead to the eventual Chelsea winner. You would assume this is something Conte and his staff noticed and at half-time he would have told Pedro, the player on the left of the attack, to try to open up as much space down that flank for Moses to exploit because Son wasn’t immediately tracking him. 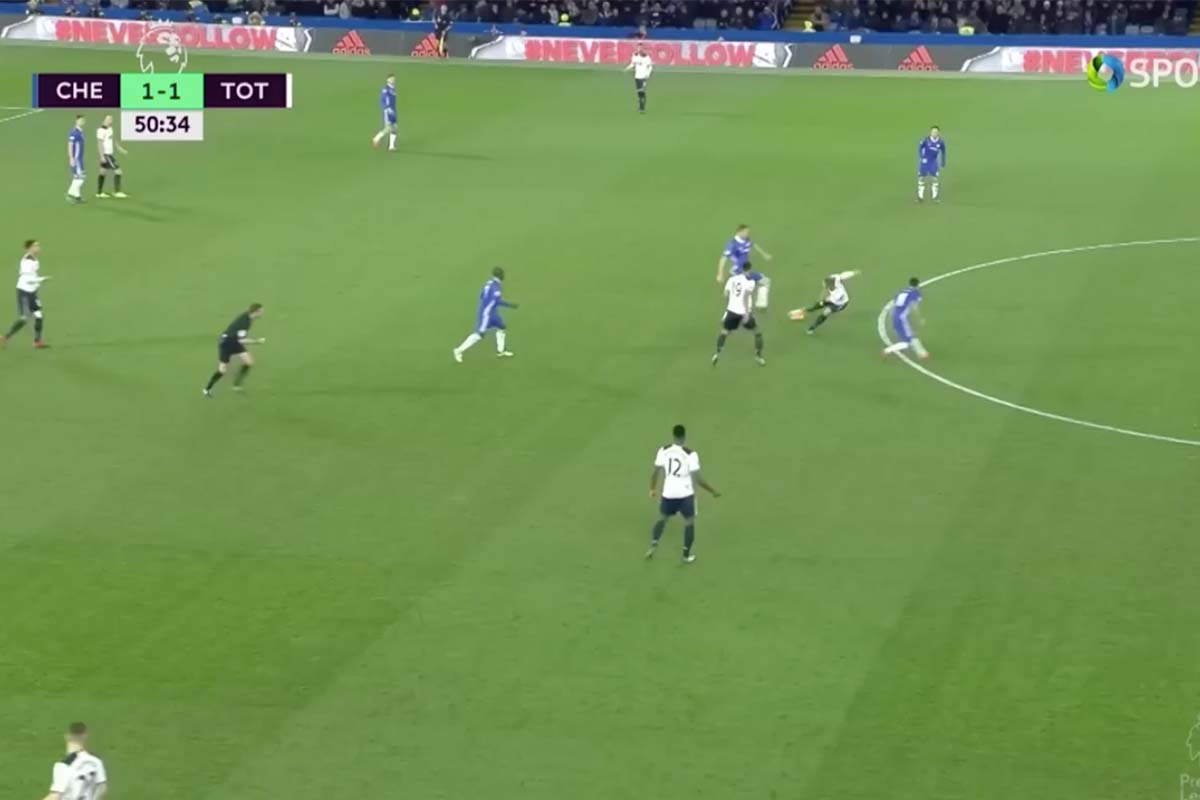 Spurs have possession centrally as Eriksen looks to play the ball forward. Next to him is Dembele with Wanyama to the left and Wimmer, the left-back, to the edge of the picture. Around the ball Chelsea have Matic and Kante with Pedro, Costa and Hazard all in positions to break if they regain the ball. 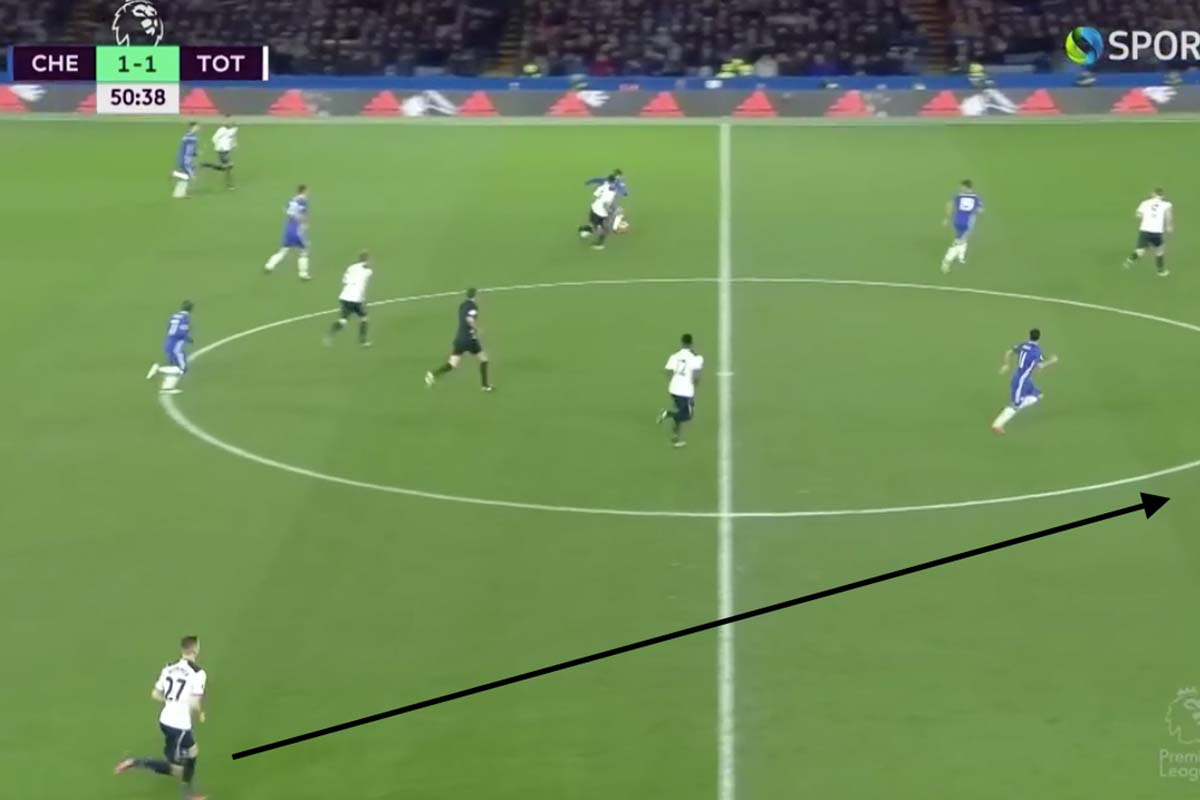 Chelsea do win possession and the ball is played to Eden Hazard. As you can see in the picture it’s 2 v 2 at the back so Wimmer has to get back to help his centre-backs. You’ll also note how high Kyle Walker is on the opposite flank to Wimmer. 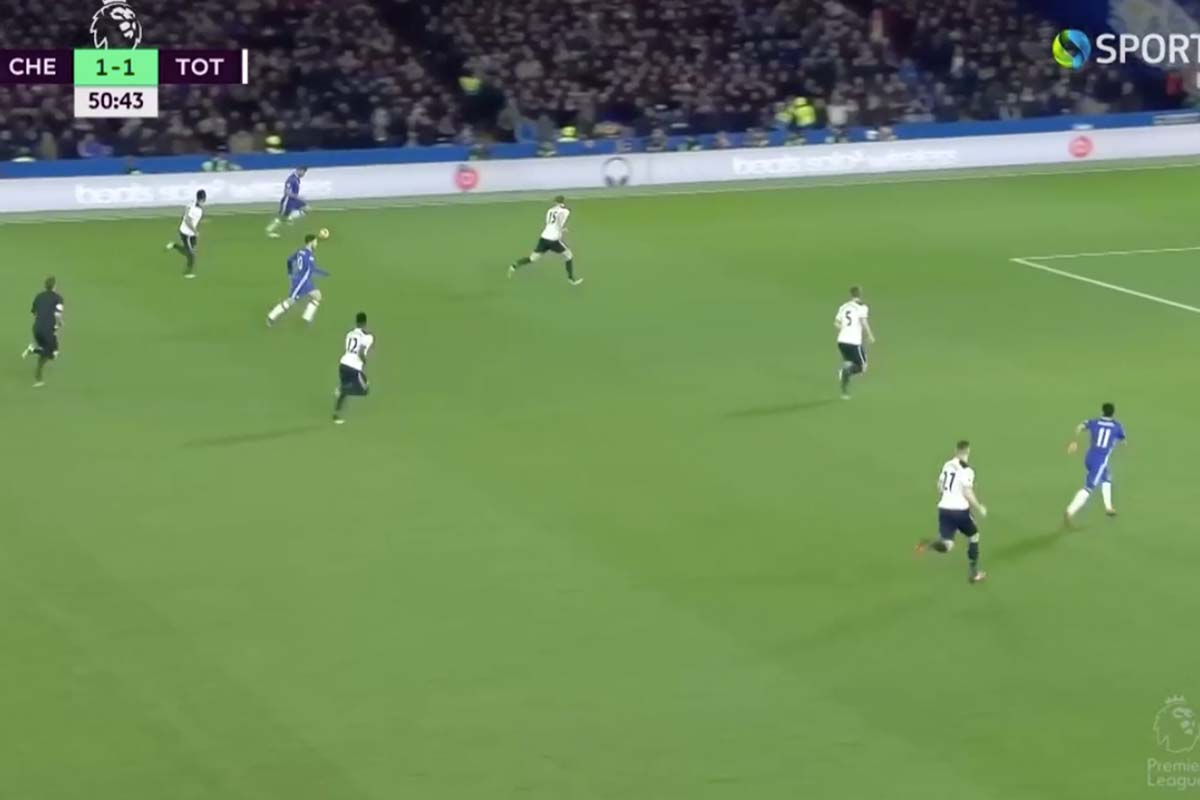 In this picture Hazard has released the ball to Costa, who has pulled away to the left, and the Spurs defence is looking pretty stretched. Just before this picture is taken Jan Vertonghen looks at Wimmer and points at him to cover Pedro. The thought process being Dier has to go out to Costa and Vertonghen has to cover Hazard’s run in behind the Spurs number 15. 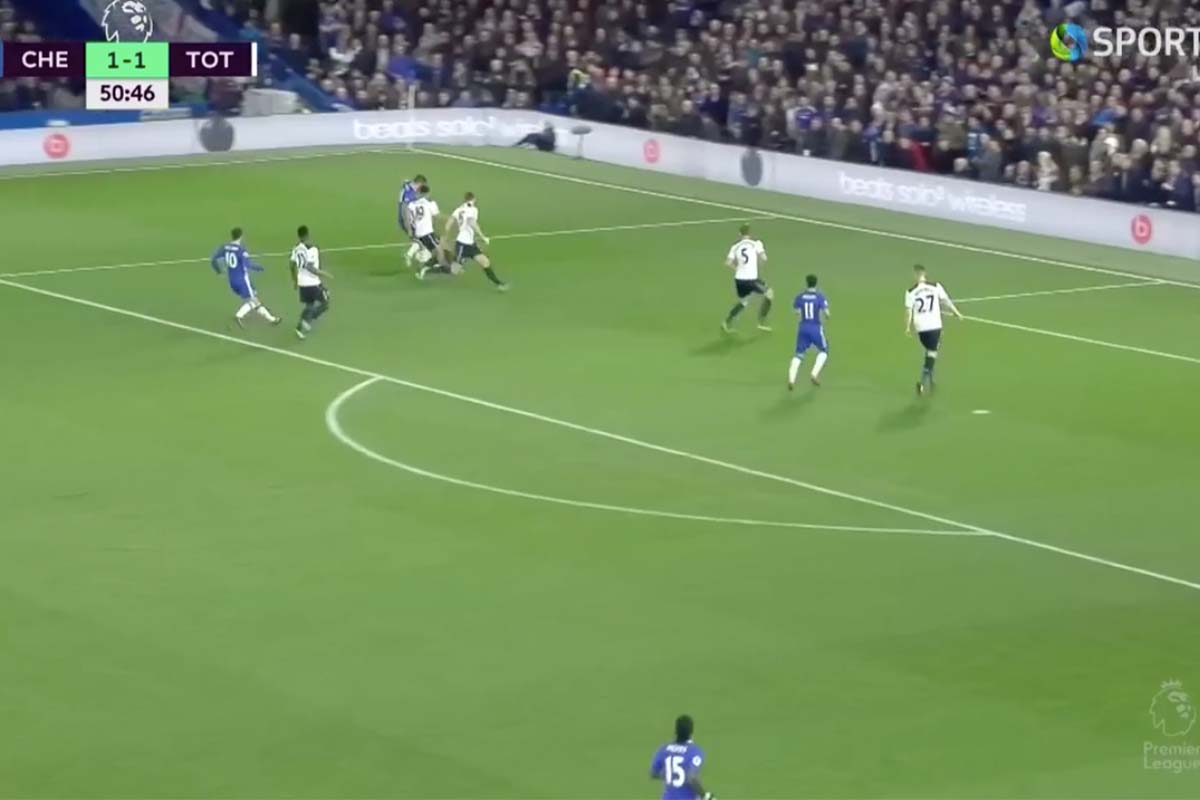 Dembele and Dier look to hold up Costa and Spurs look to have the situation covered. They have two men on Costa, Wanyama is close to Hazard, Vertonghen has taken up a position to block a cross and Wimmer is marking Pedro. 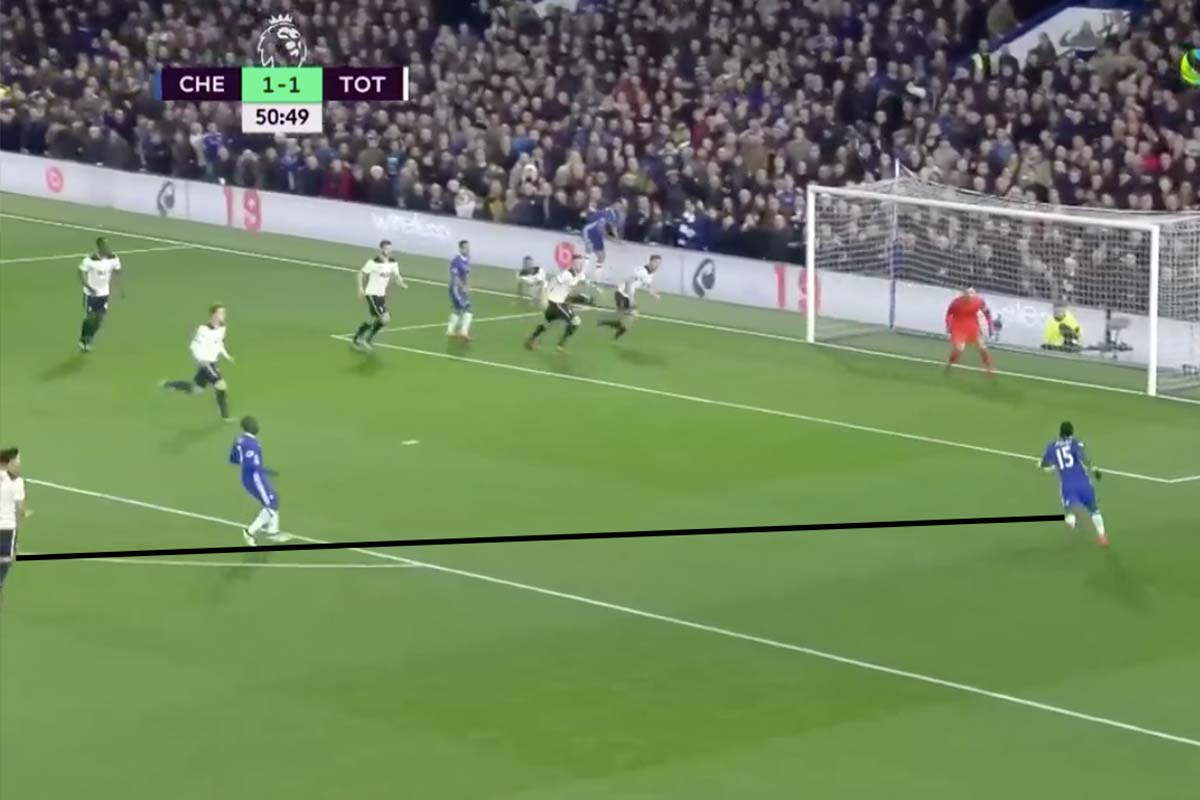 Yet somehow Costa manages to not only get past the Spurs men but put a cross into the area for Moses to have the freedom of the area to fire home. Look at the distance between the goal scorer and the man supposed to be keeping him pinned back. Pundits blamed Wimmer because it’s easy to look at that and assume the left-back has gone AWOL but break it down and it’s actually Son who hasn’t tracked Moses. Wimmer actually did well to get back and cover Pedro after the turnover of possession.

Conte used Pochettino’s own tactic against him to get the win. Some managers would have told Moses to stay back and be a little more conservative to combat the Son threat. Others may have even subbed him off and players a more defensively minded player there but Conte took the risk and got his rewards. Whereas Pochettino’s risk backfired. People may claim Costa was fortunate to get the ball into the area from the position he was in, and he probably was, but there was nothing fortunate about Moses being in acres of space.

Keep up to date with the latest Chelsea transfer rumours