The chances are Bournemouth manager Eddie Howe has spent his international ‘break' meticulously planning his side's trip to Wembley to face Tottenham Hotspur this weekend.

The Cherries have lost their last three away games and have not enjoyed recent trips to North London, losing 3-0 to Arsenal and 4-0 to Spurs when they last met Mauricio Pochettino's side in April.

Add to that the prospect of facing Harry Kane, who is in the form of his life, and the omens are far from good for Bournemouth who are 19th after picking up just four points – and one win – from seven games.

And while it would take a brave man to bet against a Spurs win, there is a possible tactical avenue worth exploring for Howe as he devises his plan for Saturday's clash.

The simple reality is while Howe espouses an attractive brand of neat passing football, that will not work against Spurs. Pochettino's men are too quick, too organised and too technically proficient to be outplayed at Wembley. But Bournemouth can still hurt them with a focused strategy. As you can see below with the WhoScored graphic, the majority of Bournemouth's touches away from home come down the flanks. 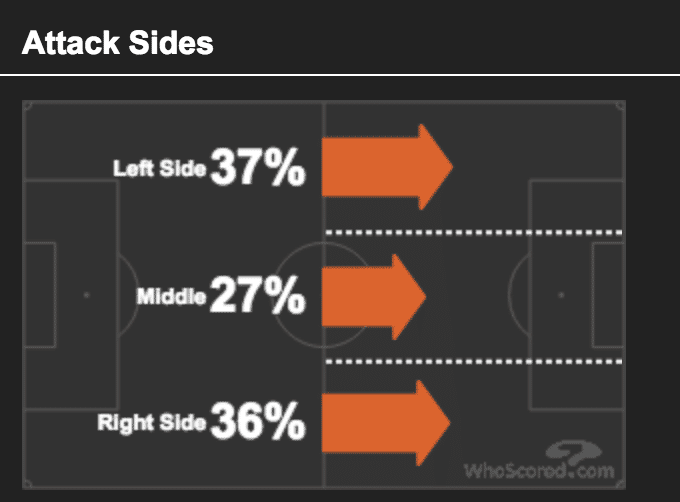 In recent away games, Howe has opted for a 4-4-1-1 formation with former Spurs transfer target Joshua King supporting Jermain Defoe up top, and Junior Stanislas and Jordon Ibe on the wings. Indeed, Bournemouth's goal away to Everton resulted in King scoring thanks to a smart attack down the left flank.

It started with Charlie Daniels laying it off to Stanislas and continuing run. The winger found Daniels with a ball down the line. Daniels then found King, who used a smart decoy run by Ibe to drive into space and fire into the bottom corner, as seen in the screenshots below. 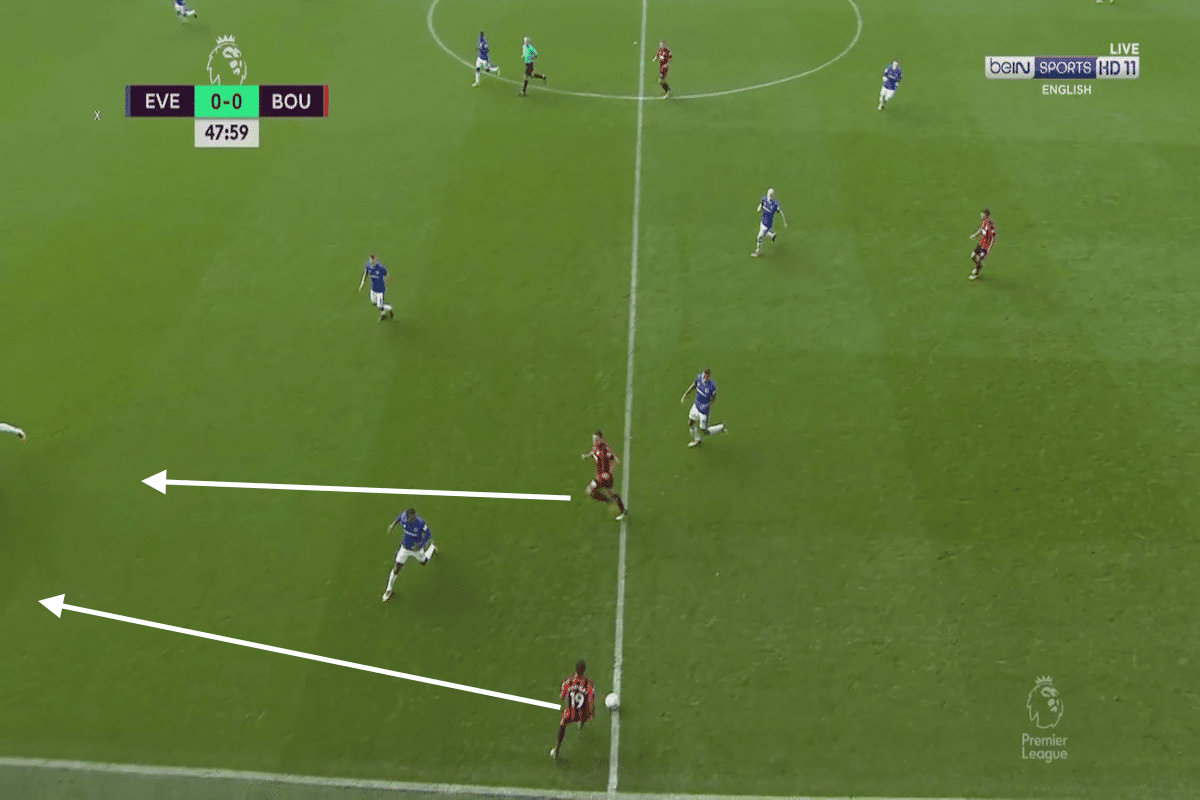 Daniels slots the ball into King who drives into the space marked with the green circle. With Stanislas continuing his run down the left, as well as Ibe's late dash into the box, Bournemouth skilfully constructed an overloading situation to which Everton had no reply. 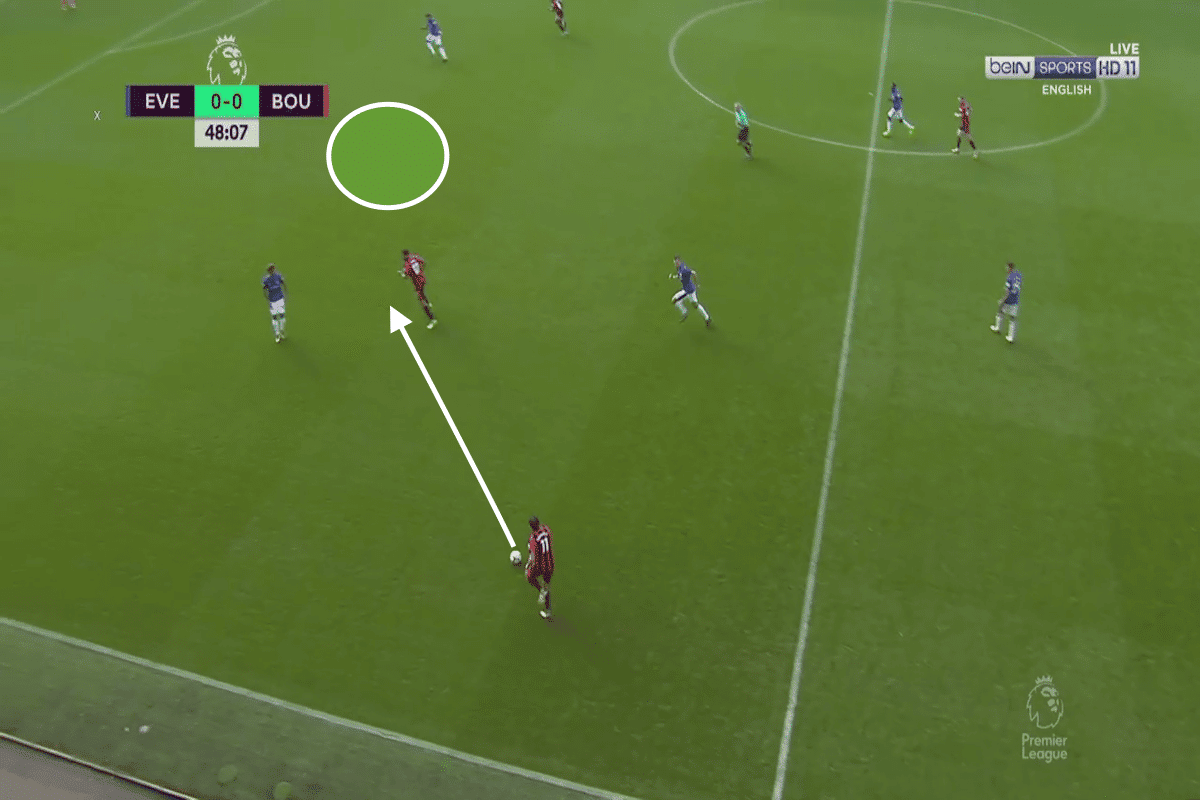 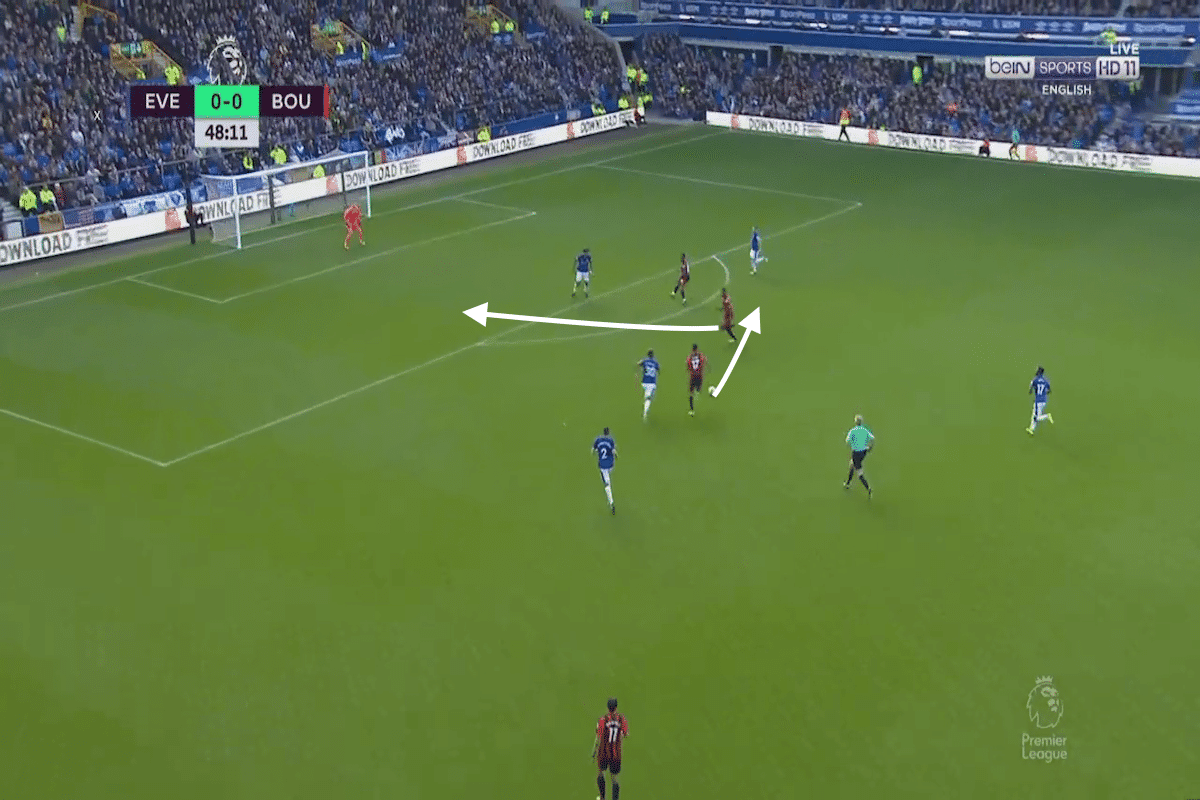 Contrast this effective attack down the wing with Ryan Fraser's wasted opportunity against Arsenal, and you can see why picking the right pass is essential with the limited opportunities Bournemouth will be afforded against top sides.

Defoe nicks the ball and releases the winger down the left. However, instead of getting his head up and spotting the striker through the middle, he attempts to take on Shkodran Mustafi one-on-one and is easily dispossessed. 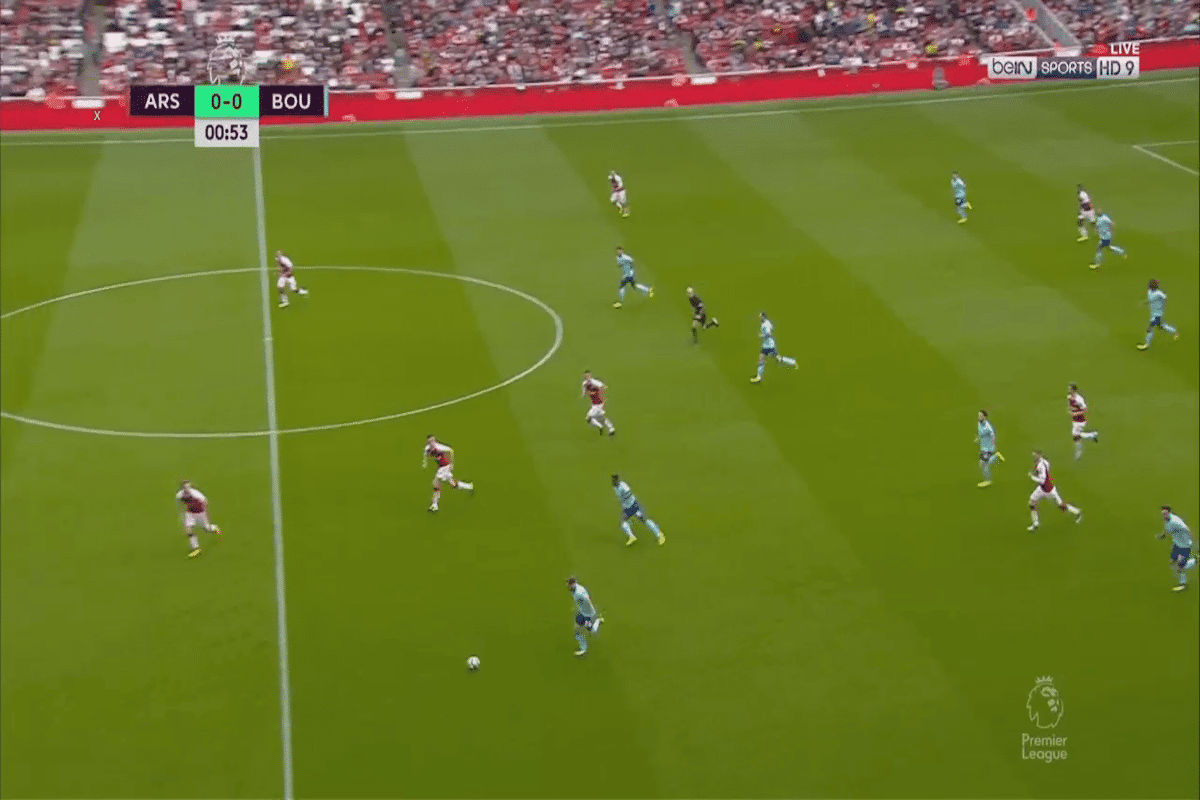 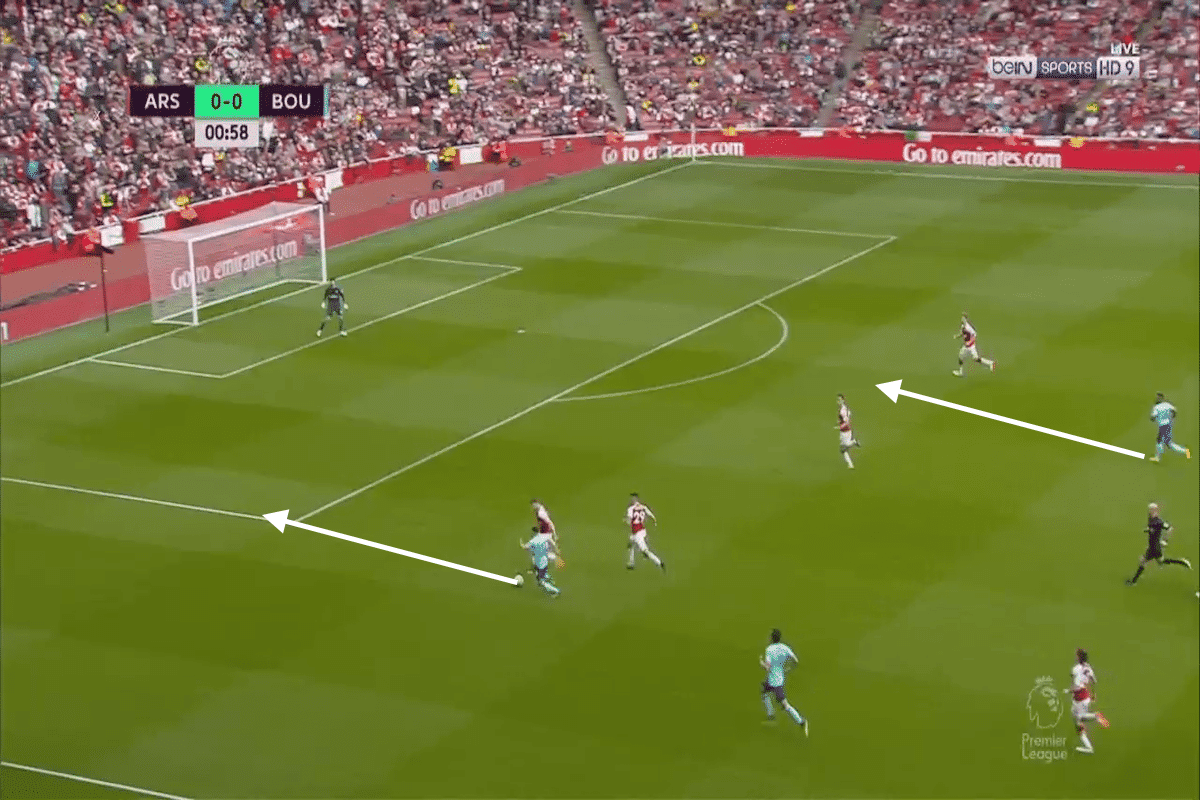 And they may find joy with such an approach against Spurs. For it to work, Stanislas and Ibe will have to be brave, diligent and ready to pounce when there is a chance. Spurs are exceptionally well-drilled by Pochettino, but their full-backs – Kieran Trippier and Ben Davies – can be caught with incisive running and direct wing play.

This can work to Bournemouth's advantage.

In their recent 3-2 win against West Ham United, Spurs' poor defending allowed the Hammers back into the game late on. Below, you can see how West Ham left-back Aaron Cresswell runs in behind Trippier, forcing the Spurs defender to come inside and leave Harry Winks one-on-one with Arthur Masuaku. 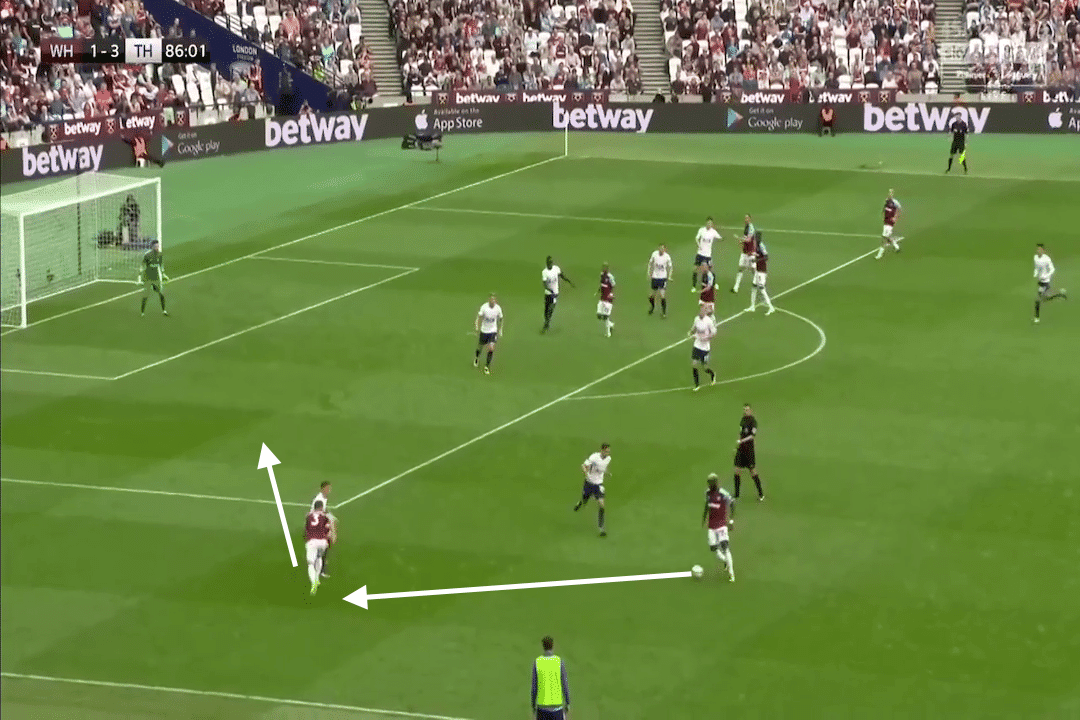 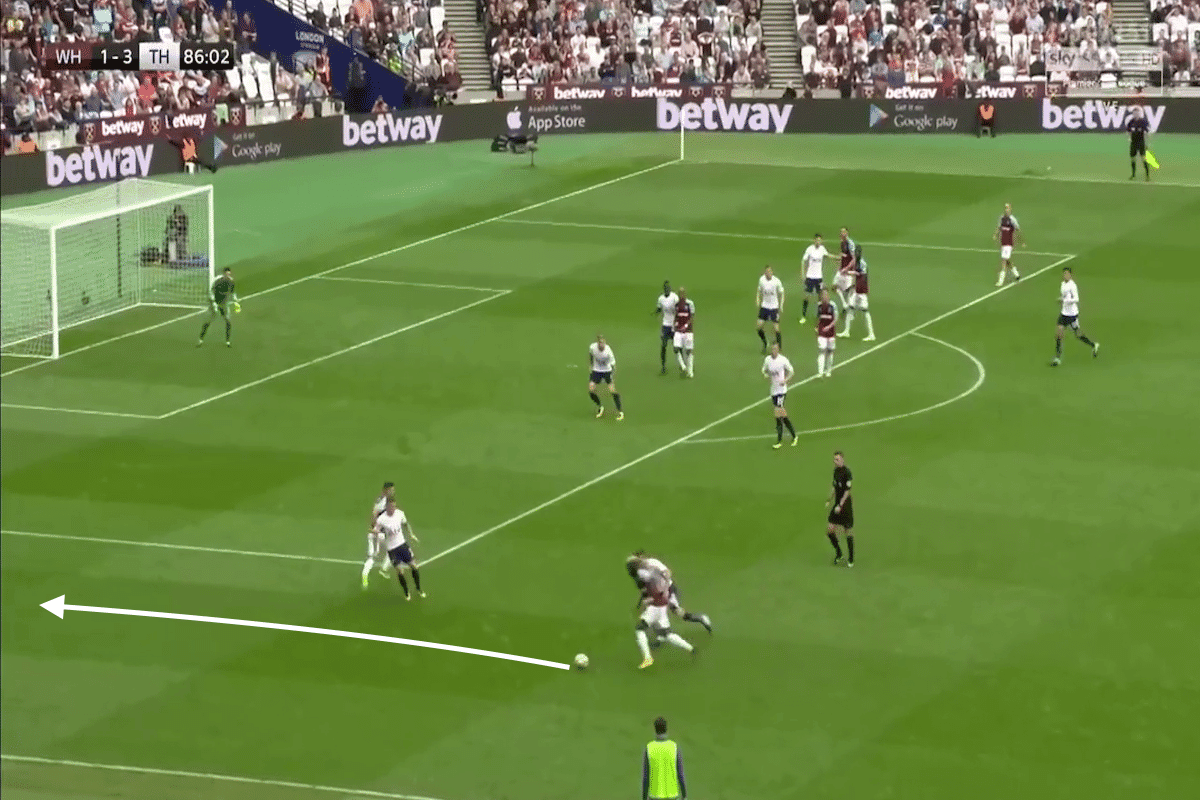 The Hammers full-back takes him on, gets the cross in and finds Cheikhou Kouyate who scores. If Bournemouth can pick their moments to build down either the left with Daniels and Stanislas or down the right through Adam Smith and Ibe, they may well find some joy.

It depends on the choice of delivery, too. King is a good target man, but he is also a doubt for the game after picking up an injury on international duty with Norway. Defoe is unlikely to win headers up against Jan Vertonghen and Toby Alderweireld, so favouring low, firmly-struck crosses would definitely be the preferred option.

With only 18 per cent accuracy from 134 crosses this season, and the possibility of King not starting, Bournemouth need to focus on building their attacks on the wing but looking to find one of their attacking players through the middle.

Defoe is one of the Premier League's best at playing on the shoulder. If the Bournemouth wingers can cut inside and spot one of his trademark runs in behind, they can hurt Tottenham.

The 35-year-old is a studious striker and he will not have missed Chris Wood‘s goal for Burnley at Wembley.

As you can see below, Trippier switches off and allows the Clarets striker to run off his left shoulder. Thanks to a glorious through ball from Robbie Brady, the New Zealand international steals in and equalises. But Trippier has to be held accountable for ball watching. 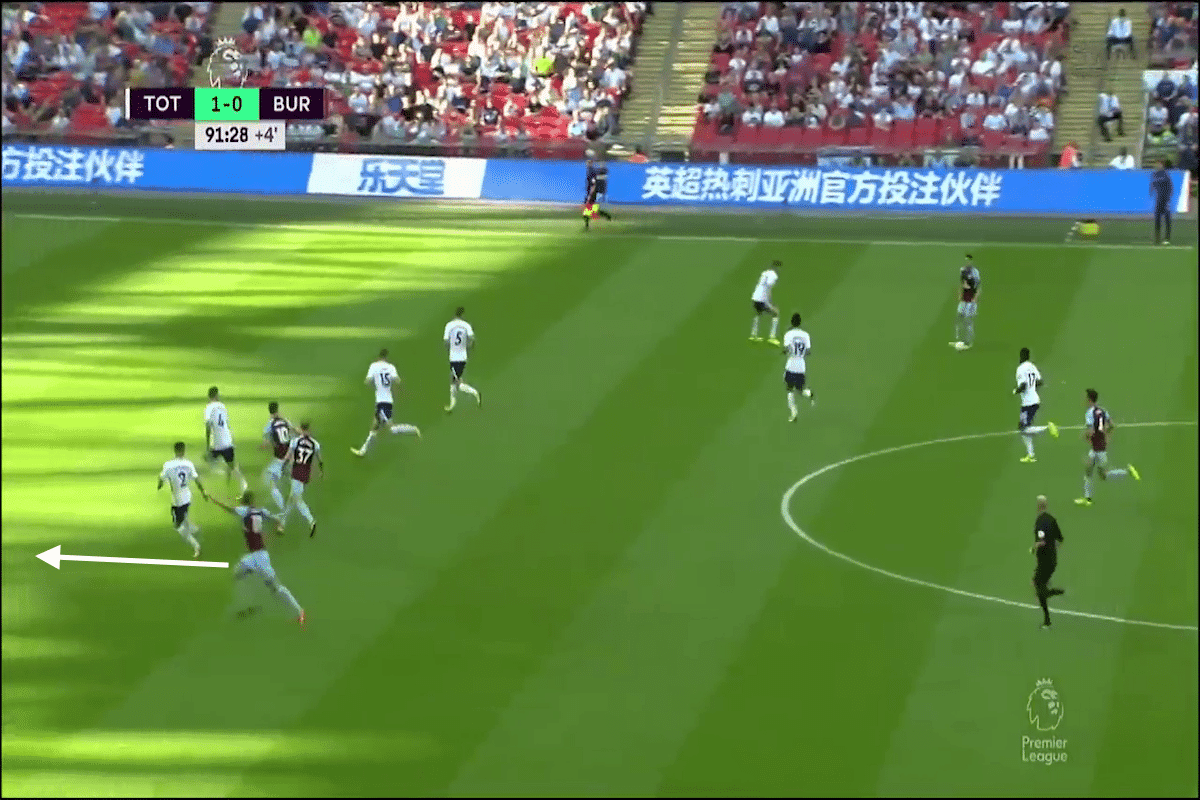 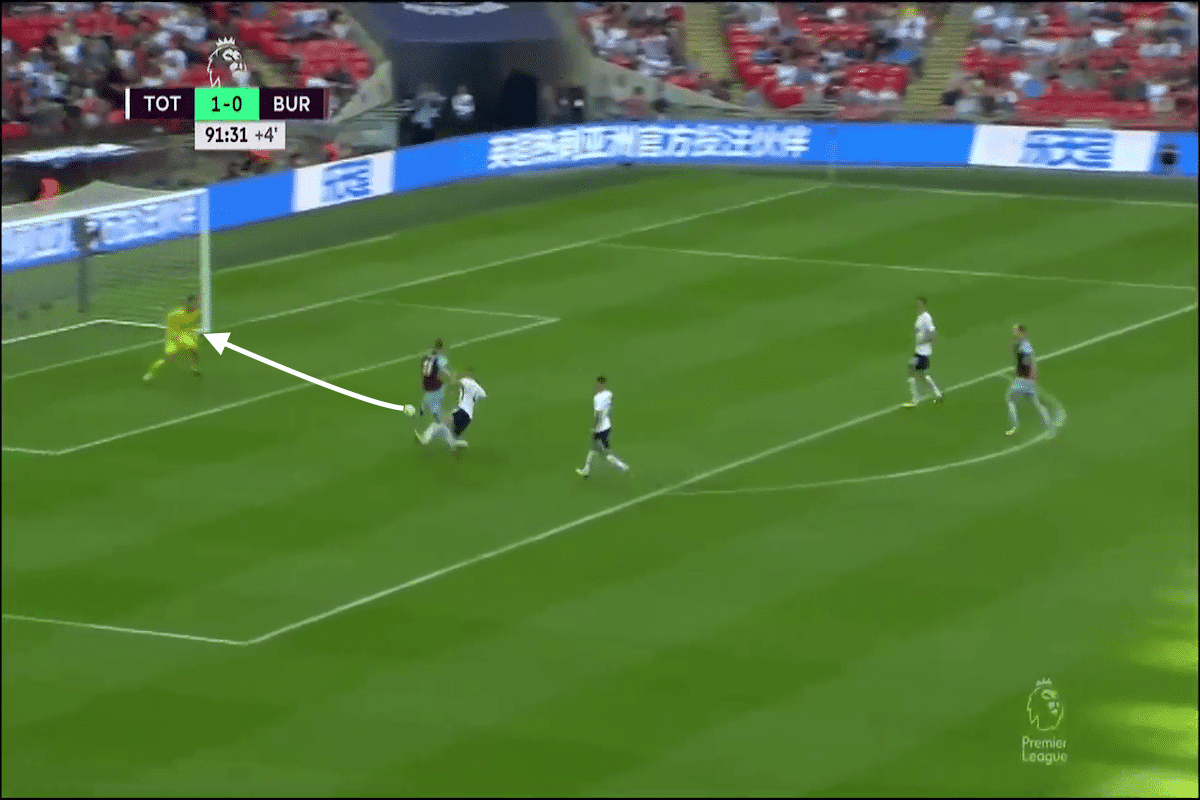 Defoe may not have the same pace in his legs as he once did, but he still has the nous and killer instinct to hurt his former side. Wembley is a massive pitch. The chances are there are going to be gaps, and it's these little pockets in which Defoe is renowned for being deadly from.

Whatever way you frame it, it's going to be a difficult trip to Wembley. But it doesn't have to be another miserable display on the road for the Cherries. If they defend as a unit and spring counters on Spurs, they may walk away from London with at least a point, and boy do they need it.