Regardless of what has come in the past, the future of Arsene Wenger is a subject that still divides opinions amongst the Arsenal fans. Wenger out, or too important to let go. The Frenchman has built an empire at the Emirates and without his guidance, despite not winning a league title since 2004, they wouldn’t be where they are without him.

You could see that he has overstayed his welcome a little and the lack of progression lately is a sign that it’s time to move on, but the respect he has means that no one has the bravery to tell Wenger it’s time to go. There are rumours that Le Professor will step down in the summer, and if that happens, according to The Sun, Juventus boss Max Allegri, wants to take over.

The Italian believes he doesn’t get the respect he deserves in Italy. Since taking over from Antonio Conte, like his countryman has done at Chelsea, he has revolutionised the club. Many were worried when he came in, after being sacked at AC Milan, but the results have been astounding.

With a four-point lead and a game in hand over AS Roma in Serie A, Allegri is on course for his third straight league title. They have won two Coppa Italia’s, a Supercoppa Italiana and reached the final of the 2014/15 UEFA Champions League.

It is believed that Allegri will leave his position in charge of the Bianconeri at the end of the season and The Sun report that his agent has contacted the London club and that signs have been positive.

The Italian is the ideal man to usher a new era into the North London club, just like he did with the Turin side when Conte left. When he was in charge, the Chelsea boss made it clear he thought Juve had to invest to challenge: “When you have 10 euros in your pocket you can’t eat in a restaurant where the meal will cost you 100.” Allegri disagreed.

Ciro Immobile, Mirko Vucinic and Fabio Quagliarella left, but apart from the £17 million deal for Alvaro Morata, all of Allegri’s business was for under £6 million. Signing the likes of Stefano Sturaro and Daniele Rugani, his eye was on the future. It’s clear to see the similarities of how both he and Wenger work and think as coaches.

He was using the same squad, the same core players, the addition of veteran Patrice Evra was an excellent piece of business, but with Andrea Pirlo, Arturo Vidal, and Paul Pogba, the midfield was one of the best, they just need a system and style of play that suited them.

Allegri is very smart. He didn’t rush in to rock the boat. For the first two months, he persisted with Conte’s 3-5-2, it was what the players were used to. Then using a 1-0 defeat to Olympiakos in the Champions League, he would switch it to his preferred 4-3-1-2 and a win over the Greek side at home was followed up with the 7-0 smashing of Parma.

That team and system would go on to challenge a phenomenal Barcelona team in the Champion League final. At 2-1 down in Munich, they had a spell where it looked more likely they'd equalise than the Spanish side. It wasn't to be, but let that take nothing away from with Allegri achieved with that 10 euro squad. 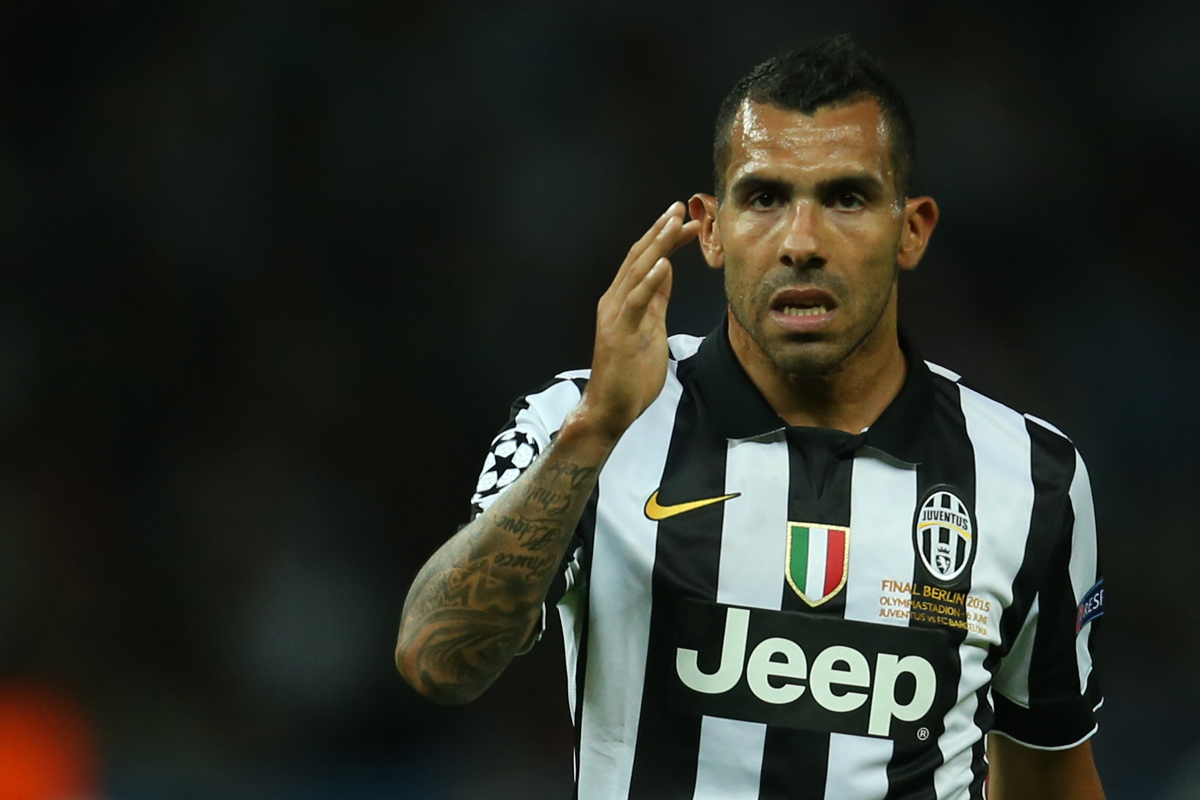 When he lost Pirlo, Vidal and Carlos Tevez, there was no panic, just a transformation of a more fluid system, one that as he admitted to Adam Digby in an interview with The Independent, he didn’t quite know how to label it.

Last season they started poorly, but once the new players were integrated, his systems and philosophy began to work. They won only three of their opening 10 league fixtures, a run of results that would probably get you sacked in the Premier League, but finished nine points ahead of Napoli at the end of the campaign.

Juventus lost four games in that run, but would only lose again once all season. That was against Hellas Verona, their second last game, when the title was already sealed. A phenomenal recovery and all down to Allegri’s vision and ability as a coach.

Their success, as with most of sports greatest teams, starts with the defence. He has developed Leonardo Bonucci into one of the best centre-backs in European football and has found a way to get the best out of the aging legs of Giorgio Chellini and Andrea Barzagli. 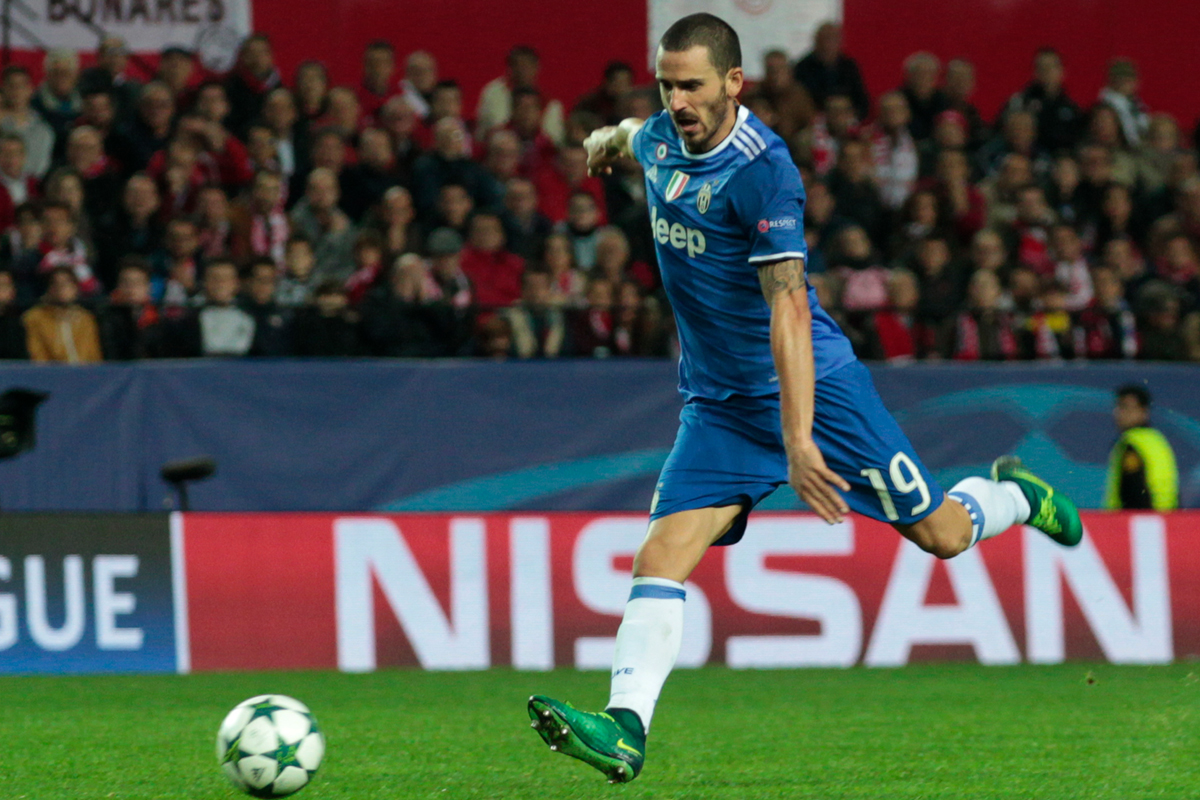 They are supported by a tough and very well-organised midfield in front, with the pace and running ability of full-backs Alex Sandro on the left and Dani Alves on the right. Stephane Lichsteiner and Evra aren’t quite the forces they were in their prime, but Allegri knows where and when to use them and the players to have around them. That means he can rotate and rest his key components when he needs too.

One area that Wenger has lacked over the last five, maybe 10 years, is the defence. Praised for their free-flowing, attacking, stylish football. When it comes to the crunch, as we have seen recently against Everton and Manchester City, lapses at the back have cost them points and taken the Gunners from title contenders, to chasers.

As this season has continued, Allegri has once again favoured the 3-5-2 formation, but it’s been very flexible and not in a way that Football Manager or FIFA 17 aficionados would be able to recreate easily.

Against Napoli, he started with three at the back, which you can see in the graphic below, with Barzagli on the right, Bonucci the centre and Chiellini on the left. Yet, when the ball is in the centre and Brazilian midfielder Hernanes (red) drops back to look for the ball, Barzagli has push out right, but Alex Sandro, the left wing-back stays deep, creating a 4-1-4-1. 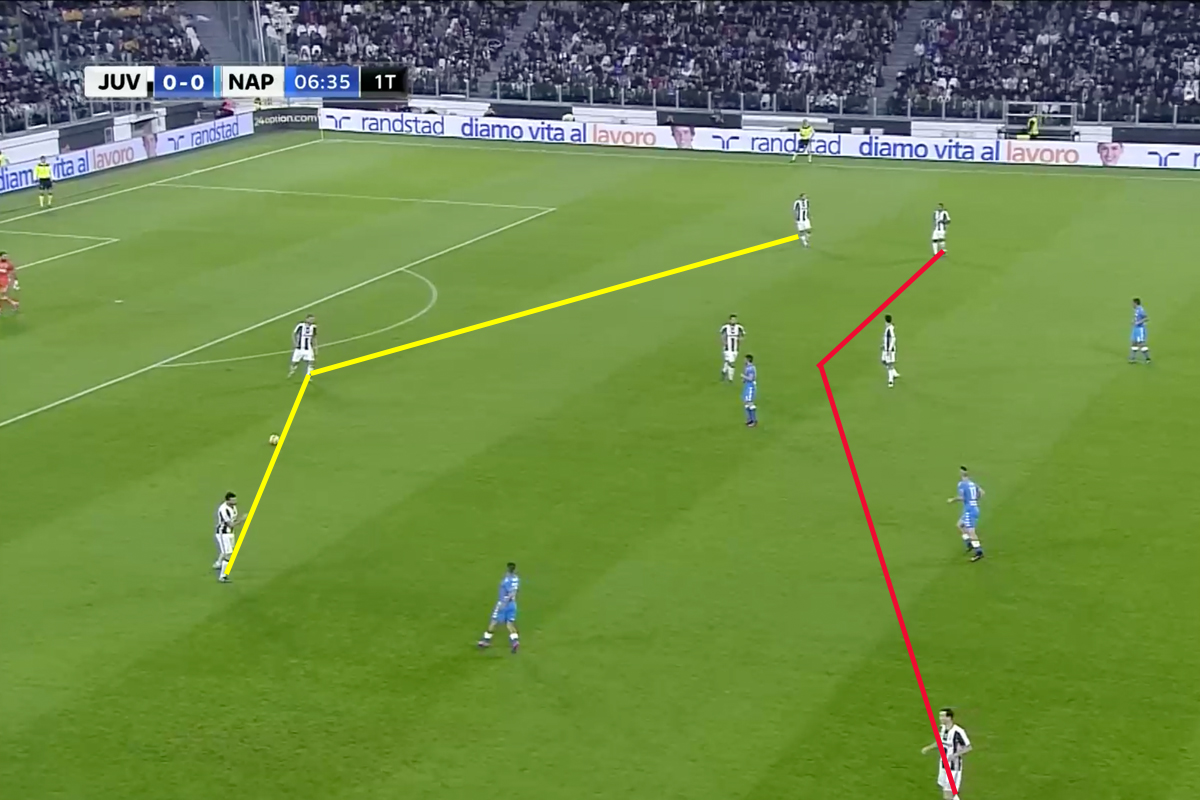 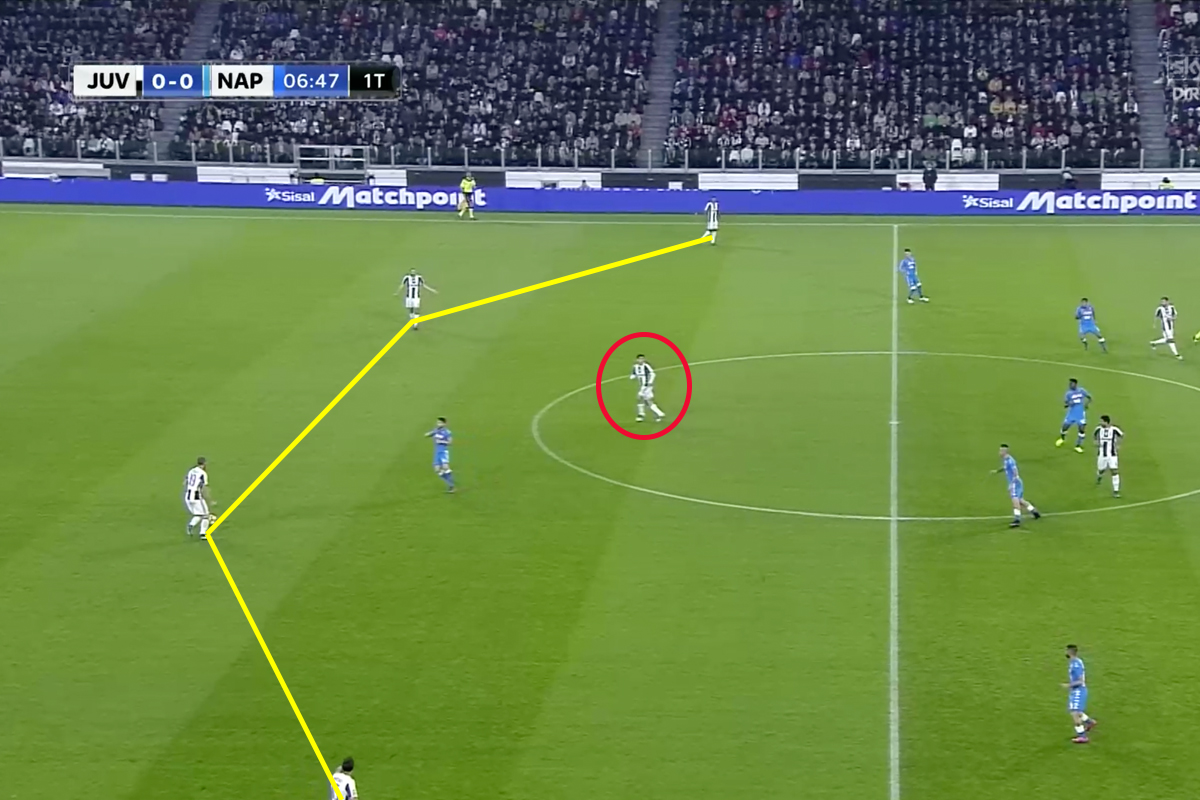 As the play develops, you can see that Lichsteiner, due to Barzagli covering the right-back role, has pushed on further and he is the target for Sami Khedira’s pass. Sandro has now joined level and the five-man midfield is clearly marked out. 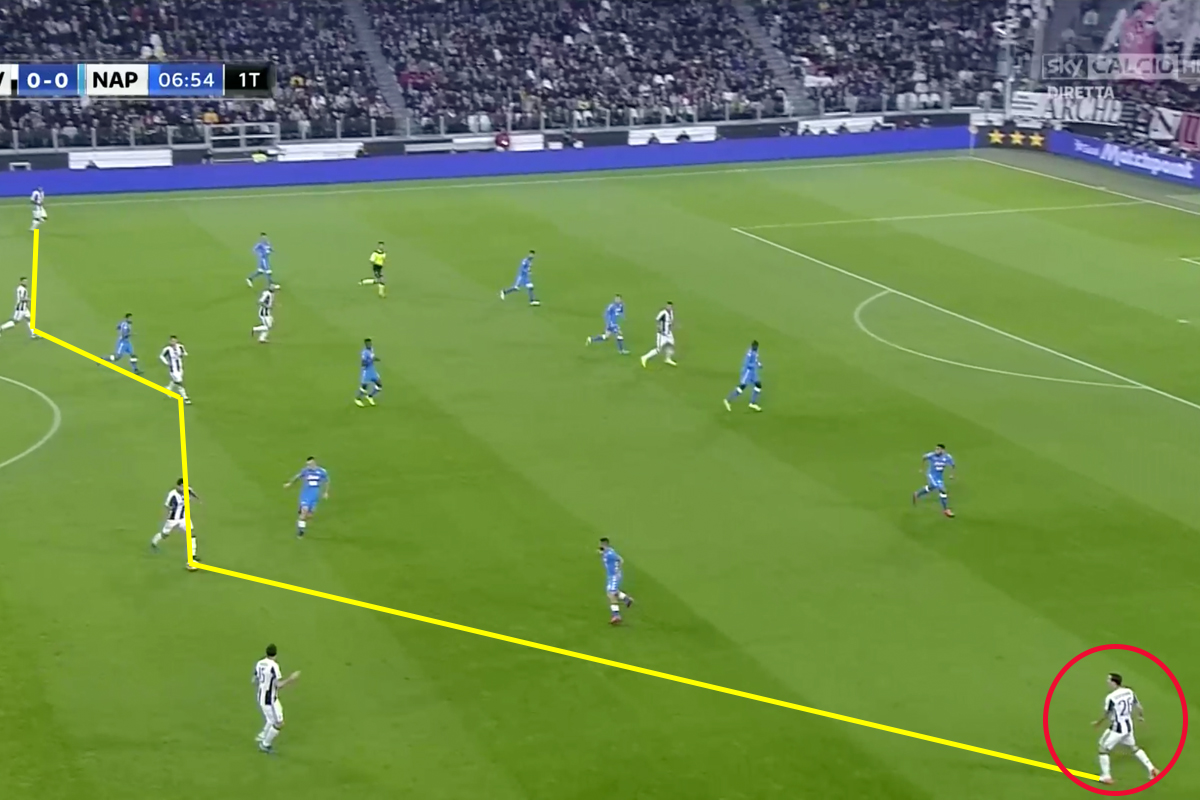 In the space of one move, the switched formations and positions to build the attack. You could see players thriving under the Italian: Hector Bellerin, able to rampage freely down the right, or Granit Xhaka, building moves with the protection of the defence, and then Laurent Koscielny, with more protection and options, becoming even better, despite already being an experienced centre-back.

Even Olivier Giroud, almost used as a super-sub this season, would gain more playing time from the rotation and possible switch up front and the other huge benefit would be with Alexis Sanchez.

The Chilean is perfect for the Pablo Dybala role, that all-encompassing, amazingly talented second-striker, able to play with anyone and in any role in the attack. The Argentine has been injured this year and has three goals in 10 games, but last season he had 19 goals and nine assists, this from a 23-year-old that is still finding his way.

Wenger has worked wonders with Sanchez, but if you can convince him to stay and extend his contract, Allegri could take him to another level. More importantly, as Allegri has shown in the last two seasons, when players like Pogba, Tevez and Vidal leave, he knows how to replace them and how not to dwell on players that want to move on.

Everything about how Allegri approaches football management suits Arsenal perfectly. His systems and styles would not only work at the Emirates, but would be something we’ve not yet seen in the Premier League and that should be enough to get Gunners fans excited.