Ander Herrera and Jose Mourinho are being lauded as the saviours of the Premier League after out-tacticing Antonio Conte’s runaway leaders Chelsea.

The result at Old Trafford meant the lead at the top was cut to just four points, but it was also an important victory for Manchester United who still harbour hopes of a top four finish.

It was a formation-less masterpiece from the manager, whose charges were able to halt his former team in every way possible.

But in the heart of the operation was a Spanish midfielder who’s slowly becoming the most United-like player in the side.

Initially, Mourinho wasn’t sure, but it didn’t take him long to change his mind.

Herrera was becoming familiar with the United bench as the club started a new chapter under the Portuguese.

Having started the first game of the season — a 3-1 victory at Bournemouth — the No 21 found himself among the substitutes for the next four games.

A defeat at home to Manchester City, and a loss away at Watford raised a number of questions about Mourinho’s side, and especially its midfield, but an EFL Cup game at Northampton Town gave a glimpse of what would eventually become the solution.

A goal and an assist from Herrera, plus a goal from the previously unfancied Michael Carrick saw them through against lower league opposition, but the match also provided an opportunity for this midfield duo to show that their strengths were what the team were lacking in the league. 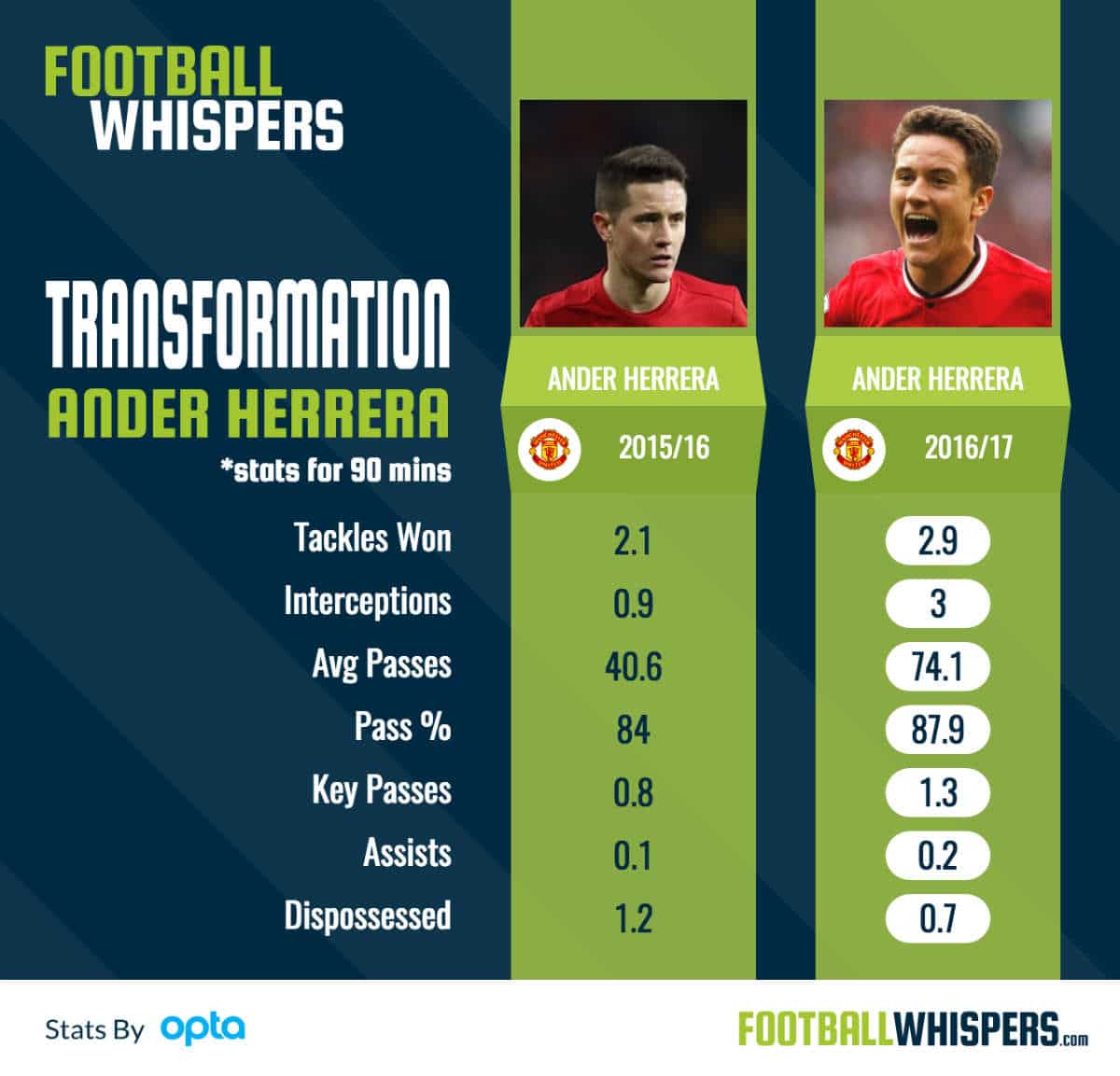 Since that game, the two players have blossomed into the club's most useful midfielders, and even if the pair don’t always play the full 90 minutes together, they’ve provided a springboard for a season which could still produce a European trophy and a top four finish.

Herrera is fast becoming the player opposition fans love to hate. United used to have a team full of these but in recent years their placid squad has been met with indifference by opposition supporters.

Red Devils’ fans have a slogan which reads “hated, adored, never ignored”, but there was a real danger that they were being shunned by the haters, adored a little less by their own, and disregarded by the rest.

In this sense, Herrera’s handball in the buildup to his assist for Rashford against Chelsea was neatly done.

It infuriated many but only added to the joy for supporters in red who’ve also annoyed opposition fans in the past with the chant “we’re Man United, we’ll do what we want.”

Herrera certainly embodies this, and his collection of yellow cards this season, two of which came in a single game, are an indication of the snide he’s reintroduced to a midfield which was in danger of becoming passive and inoffensive.

A Breath of Fresh Air

The early season stodge brought by a midfield trio of Marouane Fellaini, Paul Pogba, and Wayne Rooney, has been replaced by the class of Carrick and Herrera alongside brand Pogba. 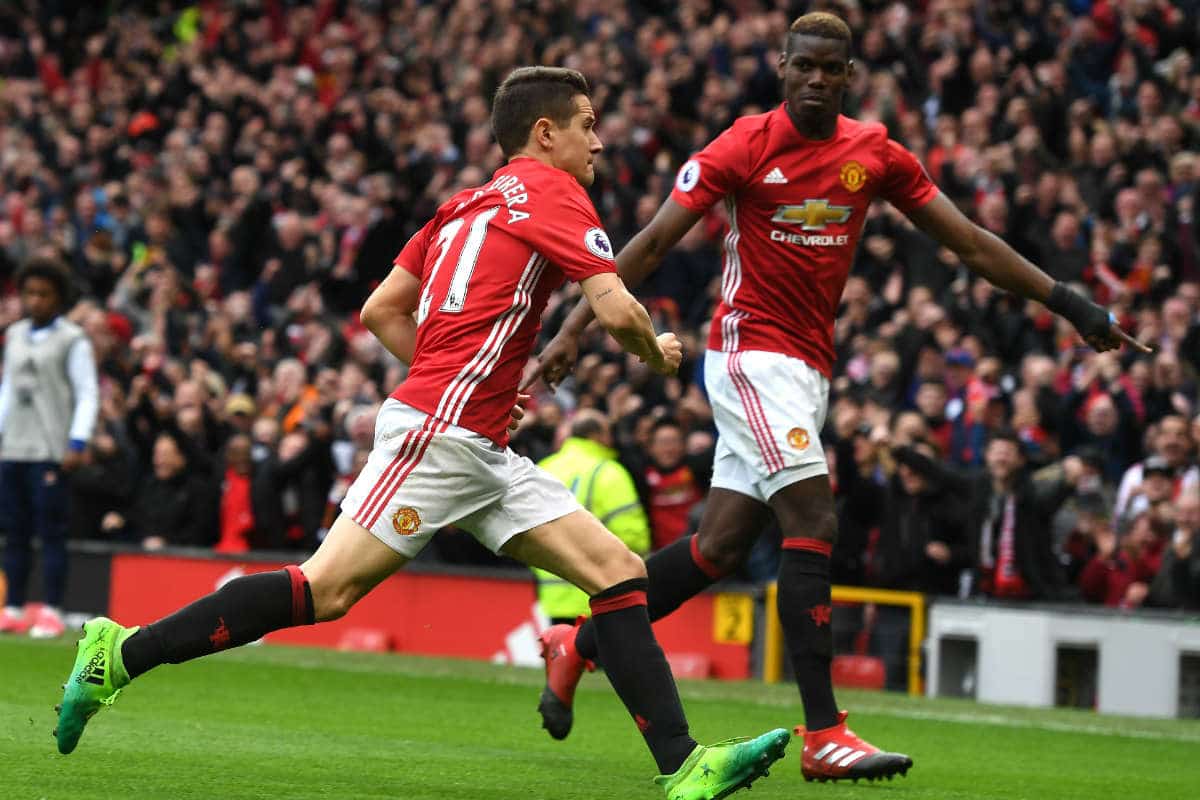 Fellaini is now used as an auxiliary footballer who has opposition managers and players flummoxed as to the latest reason for his inclusion, and the other players in the ranks are also becoming fairly settled when it comes to their roles.

Pogba and Zlatan Ibrahimovic make sure United aren’t ignored, Mourinho ensures they’re hated, and Herrera manages to do both simultaneously while also being fairly good at the football.

Since the aforementioned game against Northampton Herrera has been present for much of the season and, apart from games missed through suspension, he’s been one of few players in the lineup you could be deemed to be a regular.

Only Pogba, David de Gea, and Ibrahimović have played more minutes than him in all competitions, and this is testament to his ability to stay clear from injury as well as his rise through the pecking order from substitute to indispensable.

Fans are now calling for him to be named captain, and going into next season he could have a strong case for taking the armband, such is his availability, style, and mentality.

“I think the most important thing for a player is the manager and the fans,” Mourinho commented on MUTV at the end of last year.

“Ander has [the backing of] both the manager and the fans.”

The midfielder’s stock will only have risen since these comments were made, and while he may not be the next Roy Keane or Paul Scholes, he’s certainly United.

IS JOE HART GOOD ENOUGH FOR MANCHESTER UNITED OR CHELSEA?