Unlike in England, where you have local derbies in Manchester, Liverpool, Birmingham, and just about every major city, France can’t boast the same type of rivalries.

In Ligue 1, Saint-Etienne versus Lyon is about as close as it gets. The Derby du Rhone is the country's fiercest local rivalry, with the two sides just 60km apart.

Faced with the ferocious Green Angels at the Stade Geoffroy-Guichard it takes a cool head to not only remain calm but to excel.

Heading into the first derby of the season, a heated Sunday night fixture in November, Lyon started as clear favourites.

game coming close to abandonment with just five minutes to go and his team 5-0 up.

Bertrand Traoré and Mariano were newcomers, but it was Houssem Aouar, the 19-year-old local boy, who stepped up to the occasion, playing with a maturity beyond his years.

His performance in a hostile environment is just one of the reasons he has been picked out as one of Football Whispers' ten best teenage footballers in Europe.

“It was pretty good for my first time, especially with the historic score, said the teenager after the game. “We are very happy and very proud to win the derby given the way we played.”

As an eight-year-old, Aouar began his career at AC Villeurbanne, the same club where Fekir was given his first chance. Lyon spotted his potential and signed him up as a promising 11-year-old.

Since then he’s picked up an Under-17 league title, a campaign in which he 27 goals and added 15 assists, and made his Under-19s debut at just 16.

In 2016, after 11 goals in 19 games, he helped OL’s Under-19 side finish second in the country. It was only a matter of time before he was given his opportunity in the first team.

And after Lyon had dropped into the knockout stage of the Europa League last season, Aouar got his chance, coming on for the final six minutes in the 4-1 win at AZ Alkmaar. 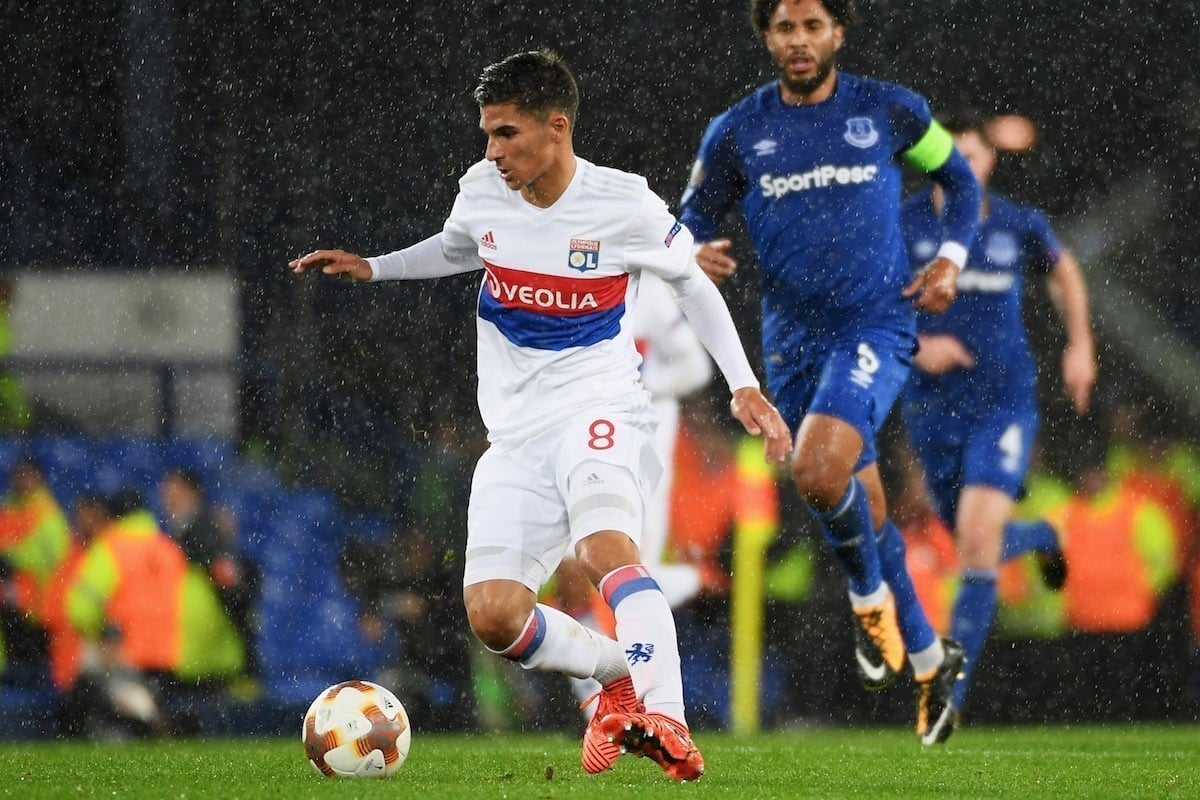 A week later in the return fixture he would score his first senior goal, ghosting into the box off the shoulder of the last defender and finishing low with his right foot.

It was a small glimpse at Aouar's instinctive movement and composure under pressure.

He didn’t get picked again as OL made it through to the semi-finals but was rewarded with his Ligue 1 debut in April’s fixture against Bastia – sadly the game was abandoned after 45 minutes due to crowd trouble.

Lyon’s faith in their teenager was made very clear this summer. Corentin Tolisso, Alexandre Lacazette and Maxime Gonalons all left the club and even though the Ligue 1 side signed several replacements, they rewarded Aouar with the number eight jersey.

Handed his first league start against Dijon in September, he repaid some of that faith with a crucial equaliser.

A goal down, the youngster made a well-timed run off the link wing to the back post and finished with close range shot with his right-foot.

Aouar's senior career is still in it's infancy, it’s far too early to tell exactly what sort of player he will develop into. Standing just over 5ft 7ins, he’s not the tallest, but has long legs and a stride which allows him to glide past defenders.

He doesn’t look the quickest, but possesses the drive on the ball that turns defence instantly into attack. 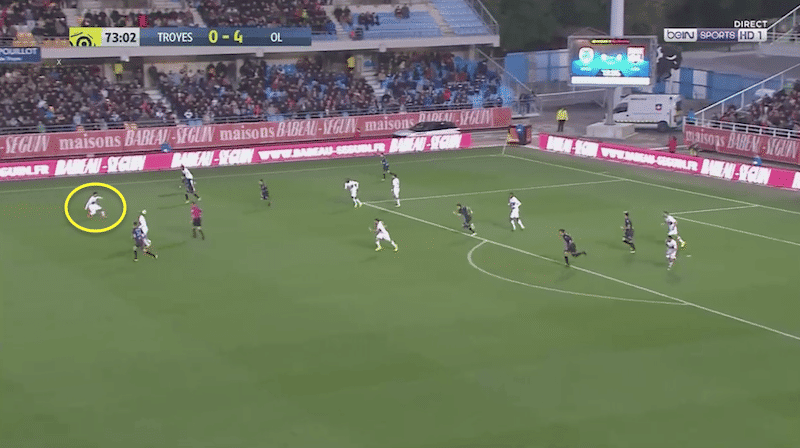 Against Troyes in the graphic above, you can see the midfielder is ready to instantly attack. Playing on the half turn, he hits the accelerator with one touch and is away. 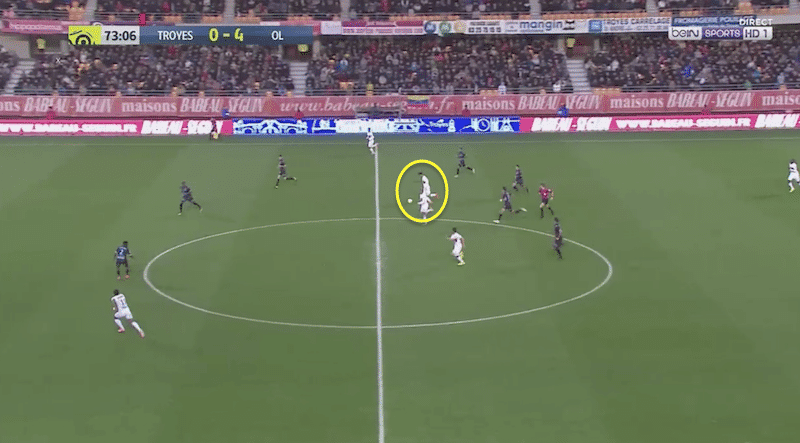 Within four seconds he is on the half-way line and, playing with his head up, spots the run down the left.

The 18-year-old then needs to show he has the ability in his right-foot to pick the pass. Which he does with ease. 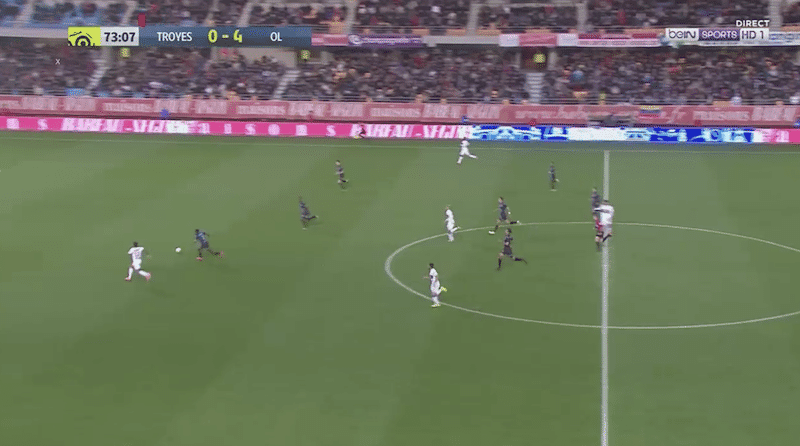 Memphis Depay is through on goal, but sees his shot saved by Mamadou Samassa saves the Dutch winger’s effort. It wasn't a finish fit for what had gone before it.

However, that proved to be just a warm-up for the excellent piece of vision and execution Aouar displayed against Saint-Etienne. 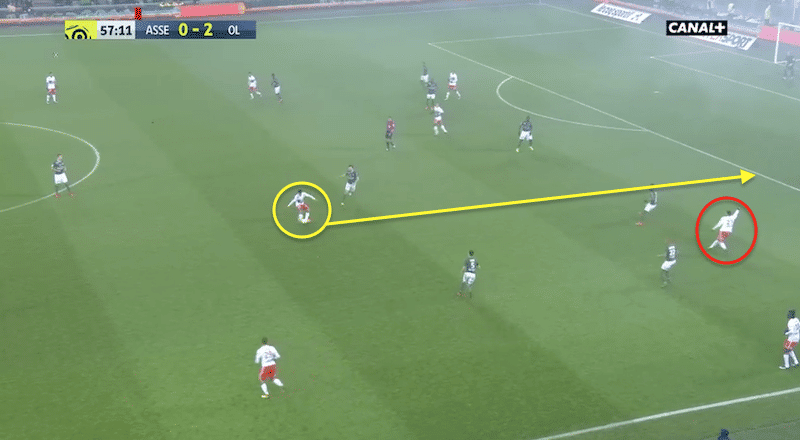 With Lyon already leading 2-0, he picked up the ball with time and space and beautifully thread it through to the on-rushing Kenny Tete.

Considering the vision to see the pass, and the skill to play it with the exact weight and angle needed, plus adding in the occasion, you’d believe he had been doing it for years.

“I try not to take it all in and just work more,” said Aouar when asked about the hype around him. “That’s why I can still learn a lot from playing today. The coach and team trust me.”

Recently Aouar's played deeper in the midfield beside Lucas Tousart, Lyon’s anchor. It has given him space to create and dictate.

Able to read the game well, he’s not just a playmaker, but has the aggression to put a foot in and contribute to the defensive side too.

Aouar tries hard to stay on his feet as much as possible, but as soon as he smells blood, he pounces to try and win possession.

And his adaptability, able to play on the wing, as the No.10 or in the midfield, make him a key component in OL’s squad for now and the future.

Everton have already seen at close hand what he can do – he scored in Lyon’s 3-0 Europa League win over the Toffees – and as he continues to grow and blossom in this team, it’s only a matter of time before other Premier League clubs start to take notice of Les Gones next home-grown talent.