Celtic’s transfer policy is a varied one. They have a knack for spotting talent from afar – see Victor Wanyama, Virgil van Dijk and Jozo Šimunović – but they also tend to sign the best domestic players. Stuart Armstrong and Leigh Griffiths – the former was signed from Dundee United, the latter after a loan spell with Hibernian – are the best examples of this in the current squad, and Jack Hendry could soon join them.

The 22-year-old has impressed for Dundee this season, attracting interest from south of the border thanks to his performances at centre-back. English Premier League sides such as Newcastle United, Southampton and Crystal Palace are said to be keeping tabs on the youngster, but the reigning Scottish champions are the latest club to be linked with him.

The rumours come after a start to the 2017/18 campaign that has seen the Celtic back line undergo turbulence. Brendan Rodgers has experimented frequently with a back three, switching between that and a back four more often than he did in his debut season at the helm. He has done this while at times missing some of his key players in central positions, such as Šimunović and Erik Sviatchenko.

Injuries to the pair led the Bhoys boss to bringing natural full-backs Kieran Tierney and Mikael Lustig, as well as natural defensive midfielder Nir Bitton, into central defensive roles. However, these do not appear to be ideal long-term solutions, so a new centre-back is a priority in January.

Celtic will have to beat off competition from Newcastle, Southampton, Crystal Palace and, potentially, other teams to sign Hendry. Why exactly is the Scotsman causing so much fuss? Here, Football Whispers answers that question.

WHO IS JACK HENDRY?

Born and raised in Glasgow, Hendry broke through at Partick Thistle, making his debut for the club on 23 May 2015 against Motherwell. He looked set to play a key role alongside Liam Lindsay in central defence the following season, but instead moved to Wigan Athletic in September of that year.

He joined the Latics for a fee of just over £300,000 but would fail to establish himself in the first team. During his maiden year he was loaned out to Shrewsbury Town, while in 2016/17 he had another loan spell, this time with Milton Keynes Dons.

Hendry gained experience of English third tier football thanks to those two spells, but his three outings for Wigan came in the Football League Trophy. He would leave two years after his arrival on a free transfer having not made a single league appearances for the club.

The youngster’s departure from the DW Stadium already looks to be a blessing in disguise, however, as it has allowed him to play regular football with Dundee and get his career back on track in the process. Having been linked to Everton two years ago, now could be the time for his big Premier League move.

Alternately, Hendry could join Celtic, who he played for as a boy. “I spent seven or eight years at Celtic, until I was about 15,” he said prior to his move to Wigan, adding that former Hoops centre-back Gary Caldwell was an inspiration. “Gary was at the club then and I looked up to the centre-halves.”

WHAT ARE HENDRY’S STRENGTHS AND WEAKNESSES?

The first things that stand out about Hendry are his physical and athletic capabilities. He’s tall and strong, meaning he is able to outmuscle opposition strikers and dominate in the air. He’s also fast, meaning he can move to close down or recover quickly when balls are played into the space behind.

Rodgers noted these qualities after Celtic beat Dundee in October. “The boy Hendry at the back I thought was excellent,” he said. “He’s quick and strong, and is a good size. Scotland need centre-halves and he looks a talent.”

In Football Manager, those comments tend to come filed in the ‘declare your interest in player’ category. And it can be no coincidence that the recent rumours of a move to Celtic have occurred following the aforementioned praise from Rodgers.

However, to play for the Scottish champions requires more than brawn alone. Brains are also key when playing in central defence for them, and Hendry appears to have the positional sense on and off the ball necessary to make the step up. 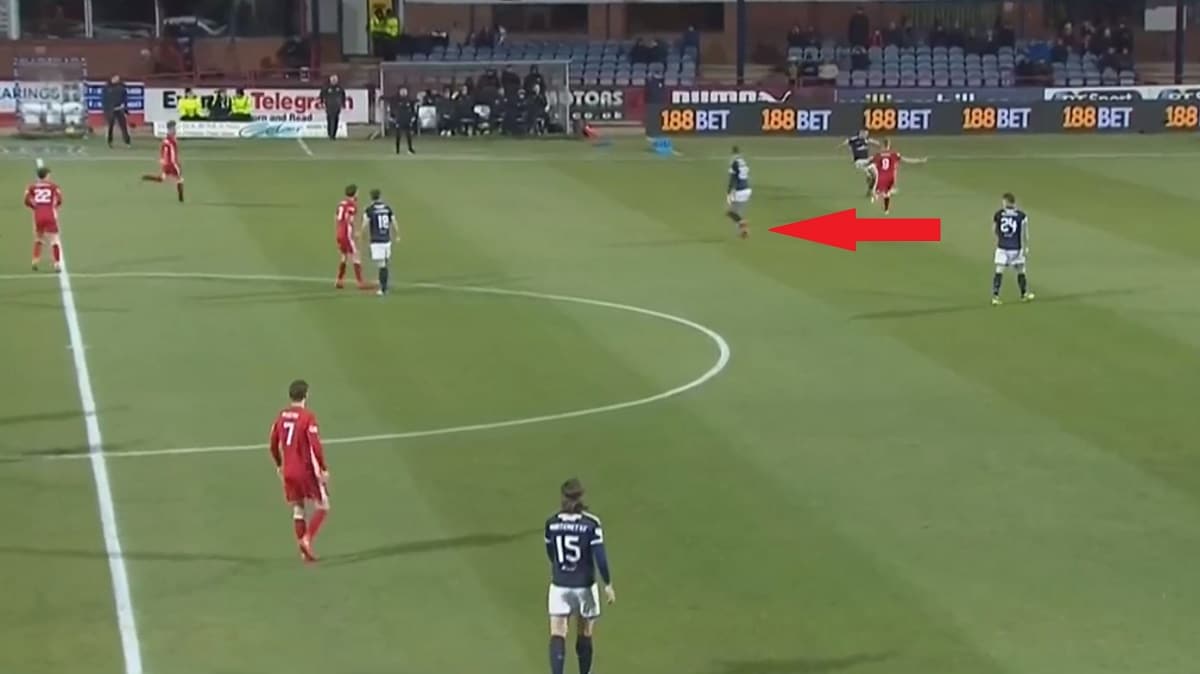 As seen in the above graphic, the 22-year-old understands where to place himself in order to facilitate a pass. Having laid the ball off to the Dundee right-back, the natural inclination for most centre-backs here would be to sprint to the right and offer a safe backwards pass. However, recognising the back-pass to the goalkeeper already exists, Hendry instead moves to the left and offers a penetrative forward pass to his team-mate.

He has a similar nous for reading the situation defensively, however his possession game is stunted. One of the most familiar sights in Celtic build-up is that of one of their central defenders – usually Šimunović or Dedryck Boyata – striding forward into the middle third with the ball at feet. But Hendry rarely does this for Dundee, and his passing range is not quite as noteworthy either.

These aspects of his game would need to be developed in order for him to succeed at Celtic Park, but under Rodgers’ tutelage he would get all the guidance he needs.

Ironically, while many would see a move to the Premier League as the tougher move, it may be the easier option for Hendry in the short term. Playing for teams such as Newcastle and Crystal Palace, where the emphasis is on defensive solidity, could be an easier tactical transition for the Scotsman to make.

While he is a highly promising young player, signing Hendry is not necessarily the right thing for Celtic to do at this precise moment in time. He is, essentially, a long-term solution to a short-term problem.

Their lack of options in the centre of defence is something that needs to be resolved immediately with the signature of a quality player who can adjust seamlessly to the pressures of playing for a big club with ambitions of dominating domestically and challenging on the continent.

Hendry has impressed for Dundee, but trusting him for a Europa League clash – Celtic play Roberto Mancini’s Zenit Saint-Petersburg in the knockout rounds – is a huge step up. For player and club, it makes sense to wait.

With his contract with Dundee expiring in 2019, there are potentially financial benefits to waiting, too. Come this time next year, the Scottish champions could potentially consider a pre-contract agreement for the youngster with a view to signing him on a free transfer.

And, by that time, they should have much better understanding of the player’s talents.

Hendry has quality, which is why links to the English Premier League and Celtic have arisen. However, for the time being, the sensible decision for all involved would be to let him develop for at least another six months.