Horoya and AmaZulu will play their sixth group stage game in the CAF 2022 Champions League on the first day of April. Both teams have limited chances of securing a playoff spot. AmaZulu needs to win this game by at least 6 goals to nil if they are to have any hope of participating in the playoffs. Read our match preview for more details, including detailed analysis, free betting tips and odds for the big game.

A narrow 1-0 win in the first leg handed AmaZulu the much-needed breather ahead of this second leg. But will the South African football club get a win in their first trip against Horoya in Guinea? Here are our best free predictions, tips and odds for this CAF Champions League 2022.

A tough duel to end with few goals

AmaZulu must score at least six goals and win by as many a goal-margin to book a place in the playoffs. However, that will only happen if second-placed ES Setif loses the next match. The visitors are three points shy of second place but a huge goal difference is the puzzle they will fight to solve. With that, and the fact that Horoya look to avenge their loss in the first leg, this game will not be easy for either side. We expect U2.5 goals at full-time.

Second tip for this CAF Champions League group stage fixture backs goals on both ends of the pitch. It is a do-or-die for Horoya, especially in the quest to avenge 1-0 defeat in the South Africa when they played AmaZulu in the first leg. Horoya has failed to score only once in their last seven home matches. Moreover, both teams have defensive problems ahead of this game, which is why we are tipping the visitors to equally score in this second encounter with Horoya.

Read below for the latest stats for Horoya vs AmaZulu as well as the best handpicked odds for this important fixture.

Horoya is six points off second place and that means they have no chance in the playoffs. For them, this game will be more of a revenge mission against a team that beat them narrowly in the first leg.

On the flip-side, AmaZulu may have the 1-0 advantage in the first leg but faces a hefty task of scoring six goals to progress. Most importantly, chances of AmaZulu progressngi is pegged on second-placed, ES Setif, losing their next game. In a nutshell, there is little for play for in this duel, if any, so we expect an open game where both teams will like score. Horoya lost four of the last five games while AmaZulu fell to three defeats in as many run of games. The visitors failed to score in three of the last four games while Horoya didn’t find the net in two games within the same run of fixtures.

Let’s see how these teams will likely lineup against each other on matchday. 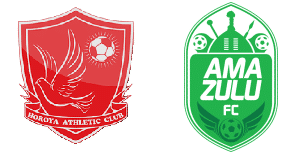 Where will Horoya vs AmaZulu game take place?

Which side are we backing in this return leg?

We expect Horoya to serve revenge after losing 1-0 in the first leg.