Top free betting tips and odds for Honka vs KuPS

KuPS aim to strengthen their top position when they travel to face Honka for their next engagement. Yellowblacks return to their home after an away league victory.

Away win for KuPS

Honka has been inconsistent in the recent games and confirmed two defeats, two wins and one draw. Yellowblacks have also won only one in the previous three home attempts. On the other hand, KuPS are yet to lose a game in the league and won four of the last five. The Canaries were also impressive in the H2Hs and got three victories in a row before this meeting. So we back KuPS to add three more points to their position from this visit.

Forwards to strike across the aisle

Both teams failed to score in only one of the last five attempts, ending in draws. Honka scored in the consecutive seven home outings before the last one while KuPS have netted the ball in all of the recent away outings. Moreover, four of the last five H2Hs at the home of Honka displayed BTTS outcomes. Hence, we see both teams scoring at the same time in this duel.

Honka vs KuPS: Check out the best odds and the latest stats

Honka vs KuPS: Check out the team lineups

After two winless games, the Yellowblacks returned to their league-winning sequence in the last game with a 1-2 victory against HIFK. With the help of five wins and two draws, Honka are third in the standings after playing nine games. The club manager Vesa Vasara doesn’t have any fitness issues to speak of before this game.

The Canaries advanced to the next round of the Suomen Cup with a narrow lead of 0-1 in the last game against Mikkelin. KuPS won eight out of the ten league attempts and ended the remaining two in draws. Fabio Schneider cannot be considered for this game due to fitness concerns.

Questions About Honka vs KuPS 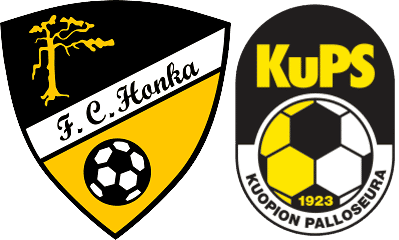 Where is the game being played? Tapiolan Urheilupuisto (Espoo).