Holland’s European Championship winning team of 1988 relied on a group of key players who not only came together to make the team tick; but also inspired a whole generation with their ability, guile and will to win.

Not only did that Dutch side conquer Europe with their blend of skill, determination and attacking football, it also contained a trio who would inspire AC Milan to a run of success the likes of which they’d never known before.

Having bought the Serie A club in February 1986, Silvio Berlusconi was looking for a way to make Milan a megaclub with his millions but little did he know that he would ultimately be creating one of the most formidable trios to play on the international stage too.

Ruud Gullit was signed from PSV and Marco van Basten also arrived from Ajax in 1987; but the addition of Frank Rijkaard 12 months later was to send the Rossoneri into the stratosphere while also having a huge knock-on effect at international level.

Rijkaard would become regarded as one of the world’s greatest defensive midfielders while van Basten continued to develop his reputation as the globe’s most clinical marksman against the most unforgiving of defences and Gullit was seen as one of the greatest attacking players in what was, at the time, the best league in the world.

In their first season playing together the trio would win the Scudetto for the first time in nine years and that title would signal the beginning of a period of domination for Milan not just domestically, but in Europe too. So when Holland arrived in Germany for the European Championships of 1988 there was much reason for optimism for the serial underperformers of international football.

At the helm was the man who is generally considered to be the founding father of the “total football” movement Rinus Michels and although he hadn’t delivered in terms of trophies he had changed football as we know it. Having three of the world’s greats at his disposal was enough to tempt him out of retirement and back into international management. 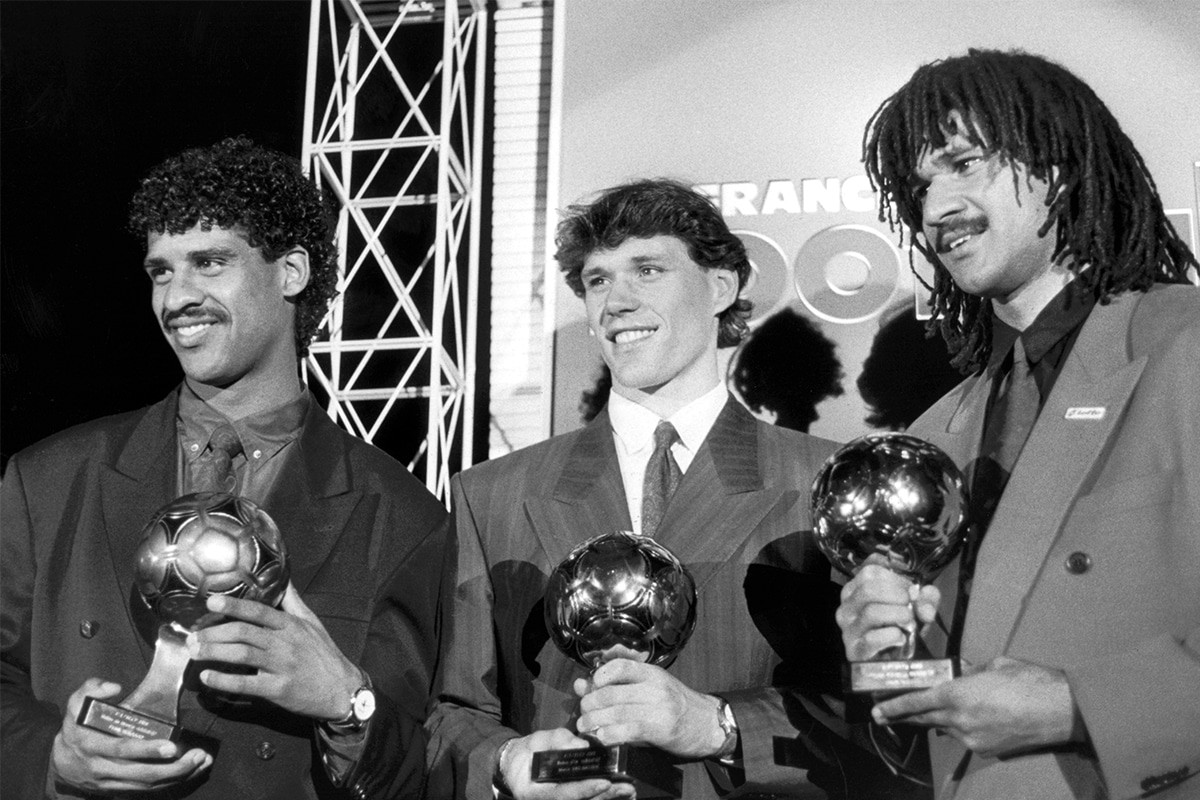 Michels had lifted four league titles with Ajax and led them to the first of the three European Cups with which they started the 1970s, as well as seeing them beaten in the final in 1969. He won La Liga with Barcelona and the Copa del Rey a few years later, but his biggest disappointment was that 1974 World Cup final, where Holland were guilty of throwing away their grip on the trophy rather than being beaten by a superior West Germany side.

Euro ’88 then was to be the chance for redemption, the opportunity to close out unfinished business and show the world that Holland were the real thing and their campaign couldn’t have got off to a better start.

In the qualifiers they were sublime, romping away with their group – scoring 15 and conceding just once in their eight games as van Basten, Gullit and Rijkaard came into their own, backed up by the likes of Ronald Koeman, Vanenburg, Wouters and Johnny Bosman.

But Holland in an international tournament wouldn’t be the same without a few twists-and-turns or bumps in the road along the way and the opening stages of Euro ’88 were no exception. They were beaten in a friendly with Bulgaria just weeks before the tournament and would then get off to the worst possible start when the competition began for real.

As van Basten sat on the bench nursing a recurring ankle injury Vasili Rats’ stunning low shot for the USSR ensured the Dutch would lose their opening group game, much to the surprise of those who had tipped them and their enigmatic trio to go all the way and win their first ever tournament.

It was England next, the side they had played off the park in a friendly at Wembley a few months previously but somehow only managed to draw with. It was a must-win game for both, as England had been turned over by Jack Charlton’s Ireland in their opening match, much to everyone's surprise.

Desperate for the points Michels decided to take a gamble and play a half-fit van Basten to lead the line – the risk paid off as the explosive front man ran England’s defence ragged, scoring three times in the process. 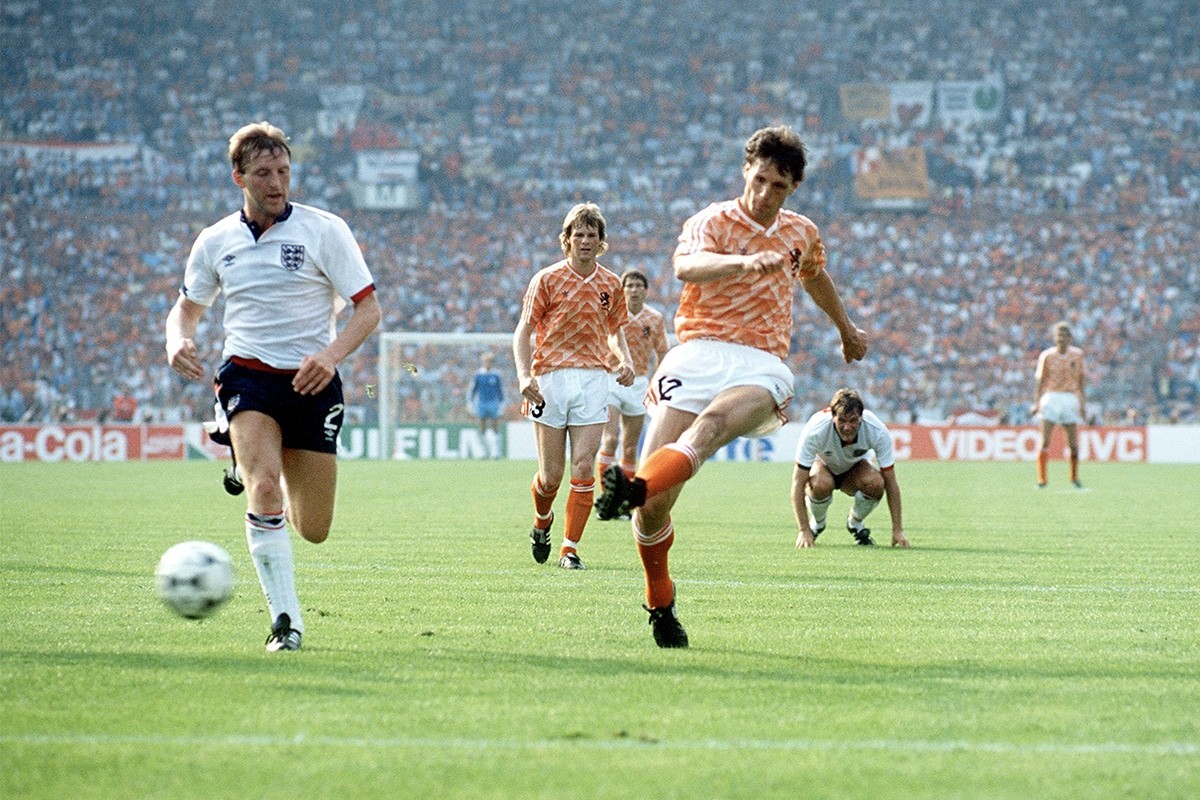 It was a return to the total Football that the Dutch had become known for under Michels in the 1970s and completed a total humiliation for Bobby Robson’s England as Gullit pulled the strings and played the game at his own tempo to ensure they would be exiting the championships at the first hurdle and Holland would live to fight another day.

They would still need to beat Ireland to progress though and thanks to a freakish header from Wim Kieft, whose header spun almost at right angles to end up in the back of the net, the win was secured and Holland would indeed go into the knock-out stages where they would meet their old foes the Germans.

In Munich in 1974 Holland had imploded against Germany in the final of the World Cup and a team which many believe was the greatest to never win a tournament were put to the sword. This, then, was not only a chance for revenge but an opportunity to put right the many wrongs which the Dutch had experienced on the International stage in the past.

In a bad tempered affair the Dutch abandoned any thoughts of trying to play their opponents off the park; opting to out-muscle and bully their opponents that night. Holland were, perhaps, a little fortunate to keep all their players on the field as they repeatedly kicked and harassed their opponents into submission and after going a goal behind were handed a reprieve when they were awarded a dubious looking penalty, which allowed Ronald Koeman to cancel out Lothar Matthaus’ earlier spot-kick.

But with the game heading for extra-time it was perhaps fitting that it would be that man van Basten who was to illuminate such a cynical encounter with a beautifully taken goal on the stroke of full time.

That win didn’t necessarily exorcise the ghosts of 14 years earlier, but the way the Dutch celebrated both on the pitch and in the stands showed what it meant to put out the hosts and their most bitter rivals in front of their home crowd.

And so it was the Soviets, who had beaten them in the opening game just a couple of weeks before, that they would play in the final in Munich’s Olympic Stadium – the very same stadium where Michels, Cruyff and total football had been humiliated in 1974. But this side was a stronger and more resolute as well as offering plenty of artistic flair. 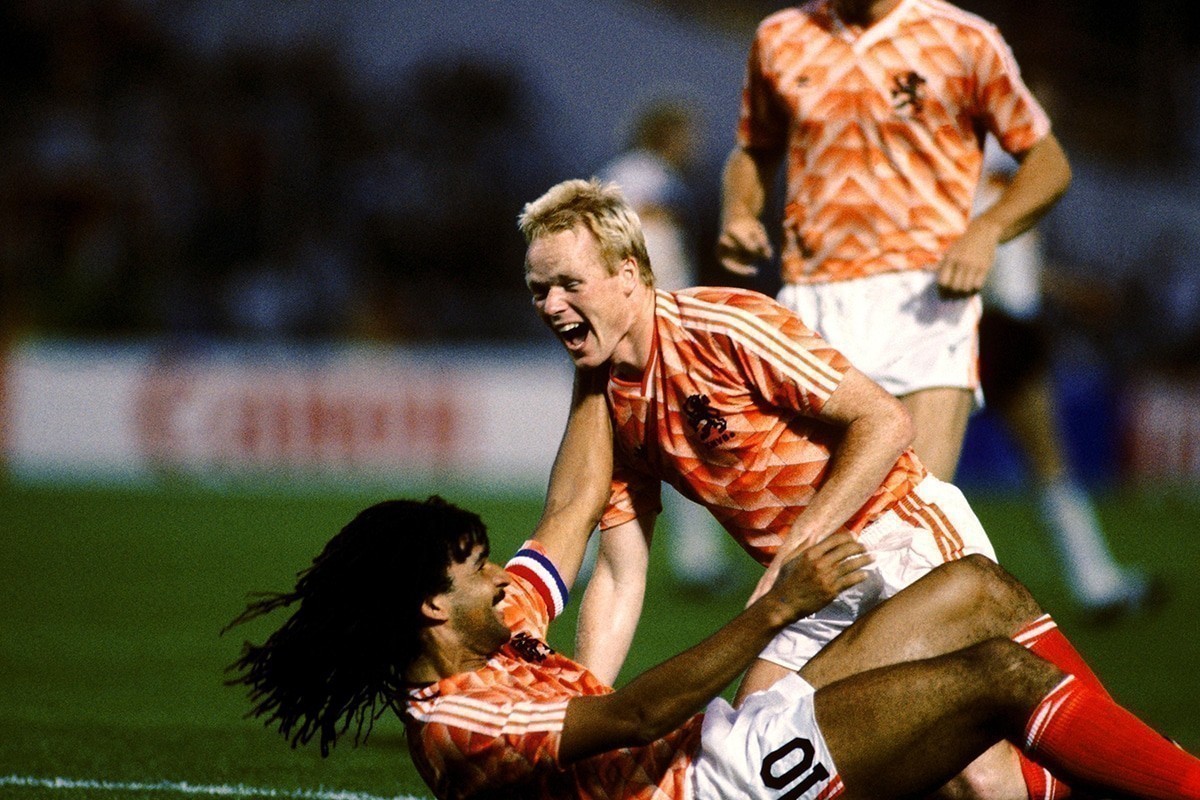 This time, in the final, on June 25th 1988, there would be no disappointment, no sign of previous failures and no capitulation. While not entirely one-sided the Dutch were the deserved winners, and to top it off the win was sealed by one of the greatest goals in the history of international tournament football when Muhren’s speculative centre was met by van Basten on the right hand corner of the Soviet box and the striker’s volley flew past Rinat Dasayev in a flash.

1988 ended a long, often tortuously frustrating chapter for the Dutch national team and the joy – combined with understandable relief – was there for all to see. The demons had been banished; the albatross removed from around their necks and after more than two decades of work Michels had finally led the Dutch to the pinnacle of European football.

With a squad that contained such quality the world should have been their oyster for years to come; but as so often with Holland old habits die hard, and before long the bickering and back-stabbing started once again. However, not before a side which contained three of the most coveted players the game had ever seen had left their mark on the game – if only for the shortest time.