In this Bundesliga fixture, midtable outfits, Hoffenheim and Mainz take on each other to continue their start of the season. Only two points separate the visitors from the trailing hosts, providing an interesting spectacle for fans and neutrals alike.

Hoffenheim's end of season form spared them relegation battle blushes. Even in that brilliant run, Bo Svensson's men managed to spurn their ambitions. The Carnival Club claimed a 1-2 victory at the Rhein Neckar Arena and we are expecting a similar result for them this time around. With the hosts coming on the back of a defeat to Borussia Dortmund, Mainz will fancy their chances against them.

Two of Mainz's last four competitive matches have seen at least three goals. Hoffenheim's tally across the same period read a perfect four in four. Given the tendency of both sides to score and concede, a high scoring affair is expected in this meeting. Historical records also support our prediction as three of their last four matches have concluded with an Over 2.5 goals scoreline.

While Mainz has only seen one match where both sides have troubled the scorers, Hoffenheim has seen this happen on three occasions in the same period. Staying on past duels, both sides have scored in their last four meetings since August 2020. Consequently, we expect both sides to be represented in this Bundesliga fixture at the Rhein Neckar Arena.

Hoffenheim vs Mainz: Check out the best odds and the latest stats

Match Preview of Hoffenheim vs Mainz

Hoffenheim will want a return to the top-seven places and European adventures this season. Sebastian Hoeness has not settled in his new surroundings and will want to make his mark at the Rhein Neckar Arena. His charges have answered his rallying call in earlier exchanges but their 3-2 defeat to Borussia Dortmund will leave them thirsty for success.

Mainz trip comes at an interesting juncture for Hoffenheim. While the Carnival Club has no injury concerns, the hosts have five players out due to injury. Bo Svensson will take any advantage offered to him, especially as he looks to assault the top half of the table with Mainz. Their scoring proficiency will come under question and it remains to be seen how his players react to their newfound reality.

Questions About the Hoffenheim vs Mainz 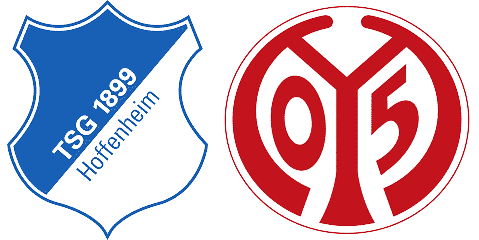 Where is the game being played? Rhein Neckar Arena.