Hodgson was Viking boss when he last worked in Norway, quitting in 2005 to take up the Finland job before moving to England to take over at Fulham. Unsurprisingly, Sørloth is even more an an unknown to Premier League fans than his new boss was once upon a time. But his name has been tossed around the analytics community for a little bit – with his performances this season highlighted.

Not only did he leave Denmark with ten goals and eight assists in only 19 matches, he boasted some great underlying numbers as well. His considerable number of assists was backed by an impressive xA (expected assists) score, while his goals were also backed up by the xG (expected goals) metric – indicators that pointed us away from the possibility of his performances being a fluke.

It’s also rare that you see a 6ft 4in forward who doesn’t simply act as a target man. He can provide for his team-mates as well as leading the line, so his profile is intriguing at the very least.

Hodgson kept the Norwegian on the bench against Newcastle United but gave him his full debut away at Everton a fortnight ago in a 3-1 defeat. The result was a blow to the Eagles' survival hopes but Sørloth's display was an indicator of what he will bring to Selhurst Park.

Palace were expected to line up in the 4-4-2 shape they have played in for much of this season, but in-game it was a well-defined 4-3-3 with Sorloth occupying the left side of the attack, as shown below.

With the home side keeping control of the ball for most of the time, there was plenty for Crystal Palace attackers to do off of it and Sørloth didn’t disappoint. Defending the left side of the pitch ahead of Patrick van Aanholt, the Norwegian international finished the match with four tackles and two interceptions to his name – an impressive defensive output for a wide forward.

Upon recovering possession, either himself or once a turnover in Palace’s favour occurred, Sørloth's importance in transition was clear. His combination of ball control, speed and his imposing physical frame meant he often helped his team carry possession from their initial third into the opposition half, either leading to dangerous counters or simply to relieve the pressure his team was under for most of the game.

Sørloth finished the game with four dribbles and having won two fouls, most coming from transition situations. Having these kinds of powerful dribblers from deep who can turn a defensive moment into an offensive set-piece is extremely important for a team like Crystal Palace who have the most shots per game from set-plays in the Premier League (4.3).

Talking set-pieces and beyond, the Norwegian forward’s aerial ability was put to use by Hodgson at Goodison Park. Sørloth won six aerial duels, five of them in offensive situation. Most came from open play, with Sørloth an outlet for long-passes out wide where, more often than not, he is superior in the air to the opposing full-back.

Coming out victorious in these areas opens space for Palace’s attacking trio to run at the opposition backline. Between Sørloth and Christian Benteke the Eagles boast plenty of aerial threat and the pair contested 24 aerial duels against the Toffees. 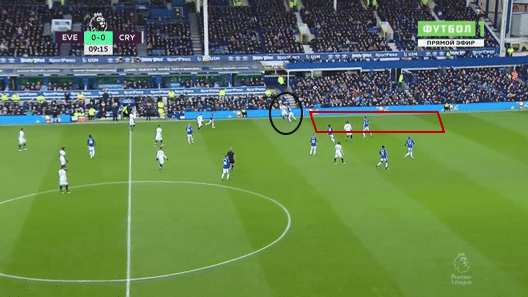 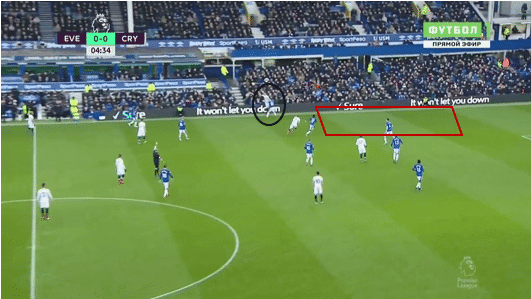 In the two examples above of goal-kicks aimed towards Sørloth (circled) we see the Palace forward force a duel with a full-back which opens space in behind for Benteke to run into.

When Palace were on the ball, Sørloth had a roaming role that allowed him to open up spaces for team-mates with his movement, provide a passing option for combinations with midfielders and moving into the box to be a target for crosses without just being stationary.

Through all of this he ended up without many chances to shoot – only really getting one solid chance with a header in the box – but finished the game with four key passes played, two of them into the central area of the 18-yard-box. 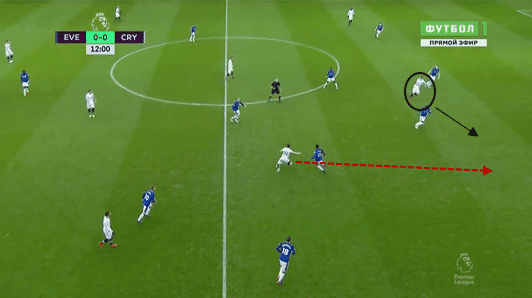 Above we see an example of Sørloth’s roaming role. After moving centrally, he makes a diagonal run towards the space on the right-hand side of the attack where he receives the ball facing goal and with space to run into.

On Sunday against Tottenham Hotspur, regardless of the fact the game is at the intimidating Selhurst Park, Palace will be expected to see even less of the ball than they did against Everton. That means Sørloth’s role will be focused on breaking Tottenham’s high press by carrying the ball from deep and creating counter-attacking situations for the Eagles.

Spurs coach Mauricio Pochettino is likely to line-up with a back four, with one of Kieran Trippier or Serge Aurier at right-back facing off against Sørloth for most of the game.

The Norwegian will have to adapt depending on the opponent, but he can trouble either man. Aurier is one of the best full-backs in the air in the league (winning 2.8 aerial duels per 90) but is also one of the ones who commits more fouls with 1.6. Meanwhile, Trippier doesn’t have the same physical presence, but only commits 0.7 fouls per 90.

Whoever gets the nod from Pochettino, Sørloth will be a threat either by winning duels and taking advantage of his hold-up play, or by earning fouls leading to free-kicks which he could end up on the end of.

The Palace newcomer appears to be a clever addition, offering a new range of offensive possibilities for Crystal Palace – especially important with Bakary Sako and Wilfried Zaha both ruled out. Hodgson is revered in Scandinavia for his impressive work earlier in his career. He will be due a little more respect on these shores if the signing of Sørloth proves a success.