In the land of total football, all eyes will be cast towards De Kuip on Sunday afternoon as table-topping Feyenoord host second-placed Ajax in what is already shaping up to be a crucial encounter in this season’s race for the Eredivisie title. But whilst it’s set to be a passionate battle between the players, the fans will be at full out war; after all, this all-encompassing rivalry between the respective giants of the Netherlands’s two largest cities is one that’s built on decades of animosity that has transcended the beautiful game to highlight divides between locations, class, religion, and race. For many, the ongoing conflict is life; for some, it has even resulted in death. Welcome to De Klassieker!

Geographically, just 54 miles separate the homes of Sunday’s sworn enemies, but the DNA of Rotterdam and Amsterdam could scarcely be different and those contrasting perspectives on culture and society can be traced back as far as the 13th century. Since the beautiful game emerged on Dutch land in the early 20th century, Feyenoord and Ajax have provided symbols of the city. And in many ways, the evolution of the rivalry reflects the progression of the cities two.

On the pitch, the respective alumni of the two clubs paints a clear painting of the two respective cities: Ajax’s list of former heroes – including the technically gifted maestros of Marco van Basten, Dennis Bergkamp, and Johan Cruyff – boasts the style and grace that reflects cosmopolitan Amsterdam. Conversely, the club of working class Rotterdam, which prides itself on being the Club of the People has often idolised the tenacious stars, with current skipper Dirk Kuyt epitomising those sentiments. That’s not to suggest that Feyenoord hasn’t produced attractive teams over the years. When it comes to total Dutch football, however, Ajax are the undisputed kings. 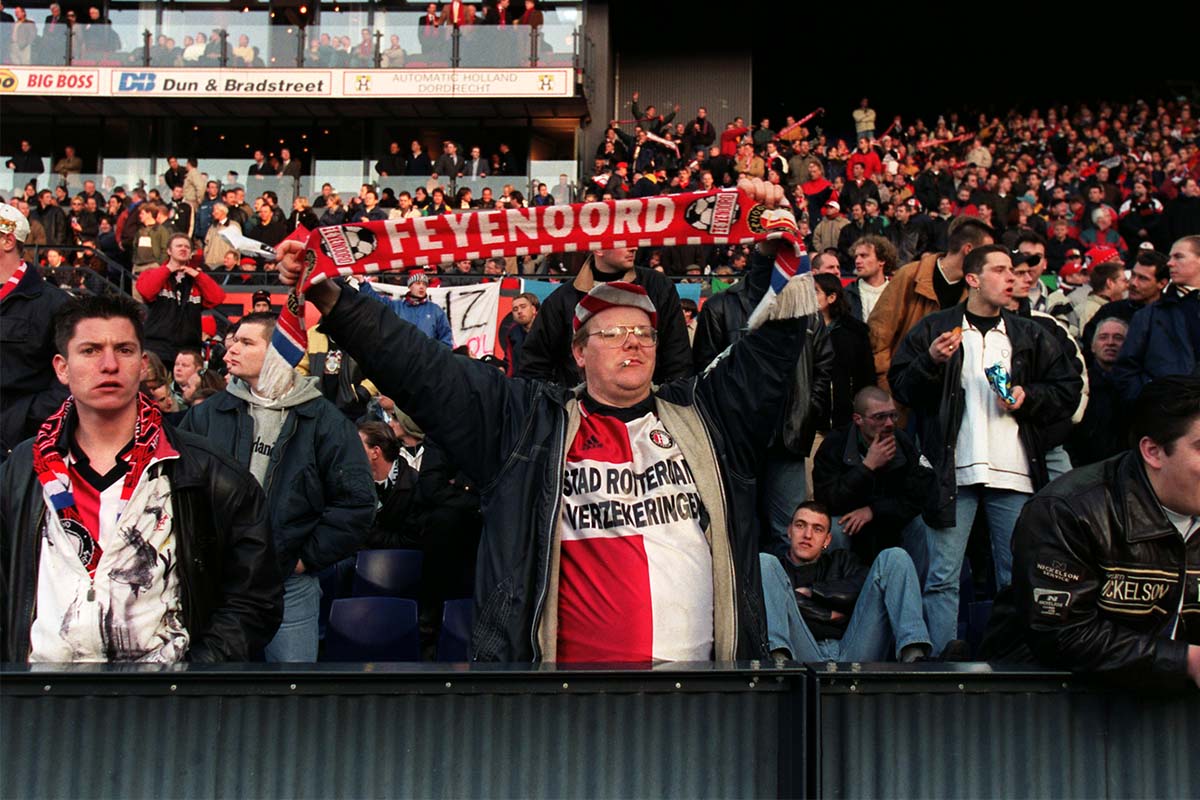 Amsterdam has also been the home of far greater success, particularly since the rivalry truly sparked into life during Dutch football’s heyday of the 1970s. Since the 1970s, the Rotterdam club has won just five Eredivisie crowns in comparison to Ajax’s far superior 20. In fact, Feyenoord are yet to win a league title in the 21st century; it’s a slump that mirrors hardships suffered by the entire city in recent decades too. An even greater source of frustration and envy for Feyenoord, however, stems from Ajax’s success on the continent.

Despite boasting a great team of their own during the early 1970s, Feyenoord had to endure the agony of seeing Cruyff and co. crowned kings of Europe for three successive seasons between 1971 and 1973. That generation of Ajax stars is largely considered one of the greatest teams of all-time. But while the standard of football on the pitch was beautiful, the scenes in the stands were starting to become ugly.

The Ajax-Feyenoord rivalry had always been hotly contested, even the first ever meeting between the sides was surrounded by controversy as the result was changed from a 3-2 Ajax win to a 2-2 draw following a successful appeal from Feyenoord regarding the legitimacy of one of the goals. However, it wasn’t until the middle of the 1970s that warring in the stands starting to gain the headlines. Fighting between Feyenoord and Tottenham Hotspur at the 1974 UEFA Cup final would be the catalyst for a new breed of ultra fan emerged across Dutch football. The English disease had spread to the Netherlands and, unsurprisingly, it would influence De Klassieker more than any other fixture.

Battles in the stands became commonplace from the latter part of the 1970s and throughout the following two decades. The flames of hatred burned stronger than ever during the early eighties as both teams saw club legends cross the border to enemy lines. At the start of the decade, Wim Jansen (Feyenoord’s second-highest appearance maker) moved to Ajax while Cruyff made the reverse switch just a few years later after falling out with the management team in Amsterdam. Neither transfer went down particularly well, fuelling even greater animosity between the two sets of supporters. 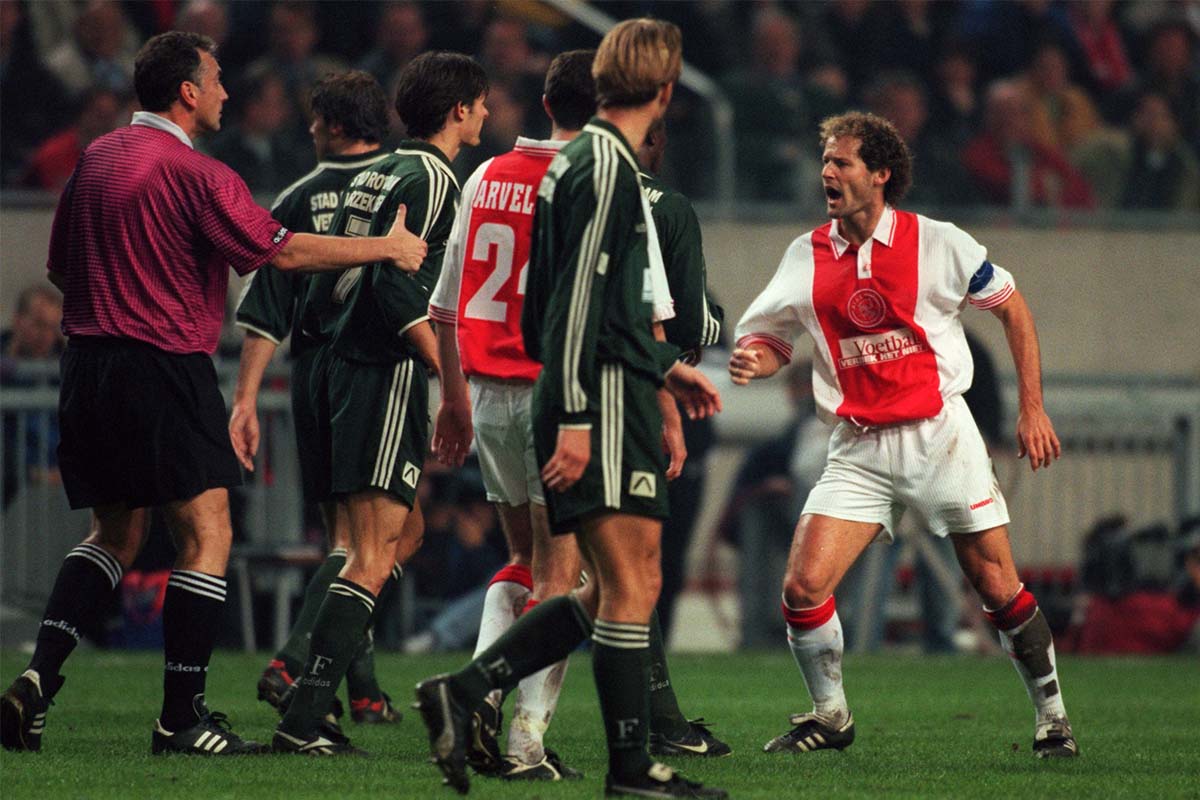 It would be easy to assume that the hatred of their respective rivals is the main feature of supporting either Feyenoord or Ajax, but it isn’t. Hooliganism has become a major element for both the S.C.F (Sport Club Feyenoord) and F-Side firms, but pride and passion are the overwhelming factors that carry the rivalry on a sea on undiluted adrenaline. Whether it’s the pumping beat of Rotterdam’s famous gabber music or the pyrotechnic displays witnessed in both cities, the atmosphere is undeniably incredible. Even at a time where Dutch football is considered a long way short of Europe’s elite, the matchday experiences of De Kuip and the Amsterdam Arena retain their spots at club football’s top table.

In truth, Dutch football generally boasts a fantastic blend for modern day fans. For the most part, the matchday experience is a family-friendly zone that is expected of 21st-century football in Europe. At the same time, ultras aren’t made to feel unwelcome. Instead, all teams have designated ultras clubhouses while this section of the fanbase is additionally represented on the board. Rather that fight the potential problems, Dutch clubs tend to work with supporters to find a suitable solution for everybody. The aim is to keep the passion and atmosphere, but without the violence and brutality.

Clubs have had to step in over the last decade or so largely because the situation had threatened to spiral out of control. Physical clashes had become commonplace during the eighties and nineties, and even the introduction of CCTV and other security forces failed to cure the problem. At one time, Dutch hooligans were the talk of global media; due to sheer volume, Feyenoord and Ajax were deemed the biggest problem. Throughout this period, fighting between the Klassieker rivals had evolved beyond fists and bottles.

The rivalry became plagued: a 1989 encounter saw homemade nail bombs used by Feyenoord, causing 19 serious injuries. Thankfully, nobody was killed on that occasion; sadly, the same couldn’t be said eight years later as a pre-arranged meet between the two hooligan firms, which would later be donned the Battle of Beverwijk, resulted in the brutal death of a well-known Ajax Ultra. When the sides met six months later, taunts were more common than remorse.

Like any heated rivalry built on the division of two cities, De Klassieker has its fair share of regrettable stories. Aside from the physical atrocities, both sides boast a chorus of songs directed at their rivals. Class, religion, and historical tragedies are common themes. Meanwhile, clubhouses have been regularly targeted.

Problems surrounding the rivalry resulted in away fans being banned from travelling for five years starting in 2009. The success of this initiative saw the ruling extended, resulting in a noticeable reduction of violence. It has come at the expense of the electric cauldron like tensions, but even the absence of visiting supporters hasn’t stopped De Klassieker from being one of the hottest derbies in world football. As far as matters on the field are concerned, it could be about to undergo a revival. Given the struggles of Dutch football on the whole, both at club level and the international stage, it couldn’t come at a greater time.

In league meetings, Ajax have totally dominated in recent times, last losing in January 2012. However, Feyenoord’s victory en route to winning last season’s KNVB Cup, which gave the Rotterdam club its first trophy in eight years, could signal a changing of the tides. After four title wins on the spin, Ajax are now two seasons without a trophy and are currently in a state of transition under new manager Peter Bosz. Feyenoord will feel that they’ve never had a better time to end their dismal league run against their fiercest rivals. Even if they lose, Giovanni van Bronckhorst’s men will end the weekend top of the table. It might be a little premature to start touting the current leaders as champions elect, but the significance of their return to relevancy cannot be ignored – for either the rivalry or Dutch football as a whole.

Both clubs have had to settle for playing second fiddle over the past couple of seasons as the Eredivisie crown has gone to PSV Eindhoven, the club that completed Dutch football’s big three. But make no mistake, De Klassieker will always be the biggest match in the calendar. Given that continental success is little more than a pipe dream for either club right now, gaining the domestic bragging rights is the unambiguous priority. For this reason, along with many others, a love of red is far from being the only thing that links the clubs and fans of the country’s two greatest cities.

While the two sets of supporters may concentrate on the differences, the similarities are clear for all outsiders to see. This is an ongoing battle between two passionate armies who will do anything to celebrate the love of their respective soldiers on the pitch. Ultimately, that’s what makes it the Classic.