While there remain questions marks over how well the Chelsea squad have adapted to the unique playing style he espouses, having guided the Blues back into the Premier League's top four and safely through to the Europa League knockout stage, Maurizio Sarri's first season in charge at Stamford Bridge is going according to plan.

Chelsea are currently fourth in the table, defeated only three times and own the second-best defensive record in the top flight, their 16 goals conceded bettered only by leaders Liverpool. And they were even the first side to inflict defeat upon reigning champions Manchester City this term, winning 2-0 in December.

But the Blues could have been on even firmer footing at this stage were it not for a lack of a reliable, top-class striker. Álvaro Morata continues to struggle in his sophomore campaign in England, Olivier Giroud is yet to convince leading he line and the recent experiment of fielding Eden Hazard at the point of the attack hasn't worked.

So, according to reports, Sarri will turn to a familiar face in an effort to resolve Chelsea's need for a goal-scorer, with Chelsea hopeful of securing a loan deal for Gonzalo Higuaín.

Sarri and Higuaín worked together previously at Napoli. Under the Italian tactician's tutelage, the former Real Madrid and River Plate poacher notched a record 36 Serie A goals in the 2015/16 season. So prolific was the Argentinian that champions Juventus resolved to break their transfer record to sign the then-28-year-old, meeting his €90million release clause.

But, two and a half years after he last worked with the striker, would Sarri still recognise Higuaín? 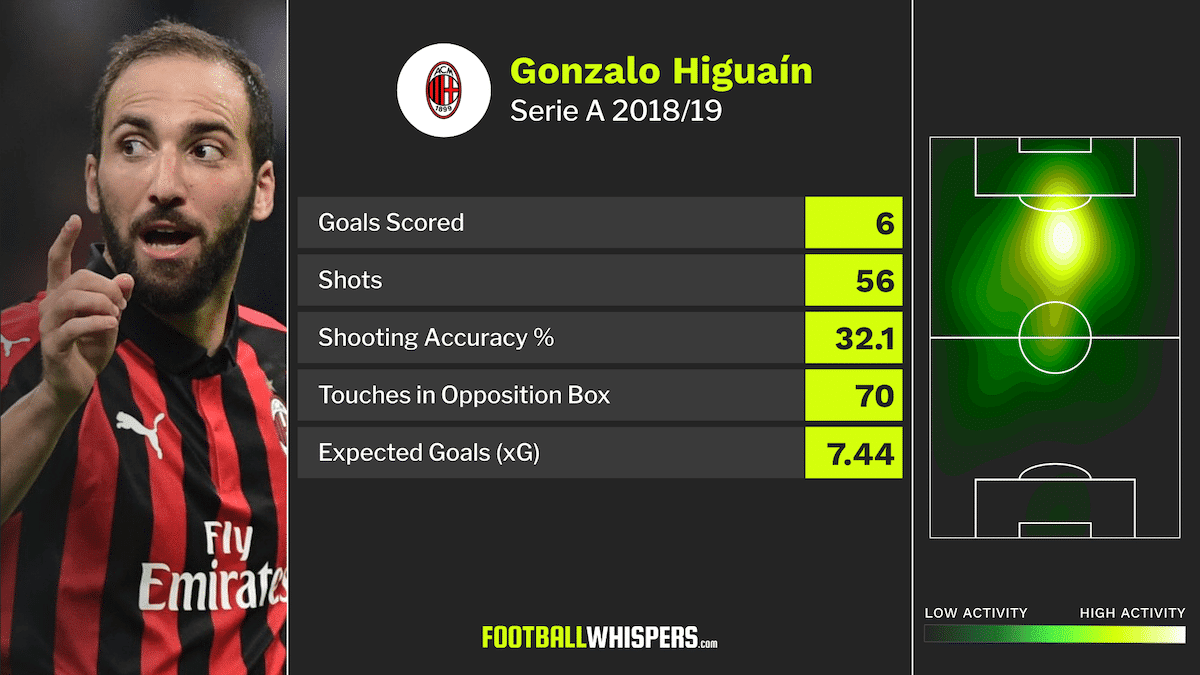 After scoring a more-than-respectable 55 goals in 105 games across two seasons with Juventus, the Bianconeri shipped Higuaín out on loan last summer to make way for the arrival of Cristiano Ronaldo from Real Madrid.

Higuaín had struck up a profitable partnership with compatriot Paulo Dybala at the Allianz Stadium, and his goals return, while not reaching the stratospheric heights of his final Napoli season, maintained his standing as one of Serie A's most-feared strikers.

But Juventus are intent upon landing their first Champions League crown in 22 years, embittered by losing efforts in two finals in the last four years. In Ronaldo, a five-time winner and the competition's all-time leading scorer, they procured as close to a guarantee of success as possible.

By contrast, Higuaín had failed to make enough of a mark at Europe's top table, netting ten goals in two campaigns but failing to lay a glove on Ronaldo's Madrid in the 2017 final.

At Milan this season, things started promisingly for Higuaín. Like Chelsea, the Rossoneri were in desperate need of a top-class marksmen in their efforts to re-establish themselves as a top-four force. With seven goals in his first 11 games for the club, the 31-year-old appeared to have answered Milan's prayers.

However, he has scored just once in ten games since. Starting against his parent club in November and surely keen to prove them wrong for discarding him, Higuaín was sent off for two bookings in quick succession in the closing stages. Juventus won 2-0 with Ronaldo on the scoresheet; Higuaín had mustered just one shot on target before being dismissed.

The loan deal that took Higuaín to the San Siro included an option for Milan to buy the player outright at the end of the season for £32million, one they are highly unlikely to trigger. It is believed Juventus will insist on a similar arrangement with Chelsea, should a loan to Stamford Bridge be agreed.

In Sarri's free-flowing Napoli side, Higuaín was the focal point of the attack. While all around him buzzed, interchanging positions and shredding defences with incisive passes to meet perfectly timed third-man runs, the Argentinian striker employed his instinctive movement and finishing to dispatch the steady stream of chances created.

Napoli were among the most entertaining teams in Europe under Sarri's rule, adept at overloading opposition defences and crafting high-percentage cut-backs into the penalty area. Higuaín has never been the quickest or most skilful striker, but few possess equal savvy when it comes to stealing a yard on defenders and improvising finishes from all angles; he was a perfect fit for Sarri's system.

He may have lost a yard of pace and his reactions might not be as razor-sharp as Sarri will remember, but Higuaín would still be a major upgrade on Chelsea's current options for the position.

A more reliable finisher than Morata with better movement than Giroud, Higuaín's arrival would allow Hazard to return to his natural position on the left wing.

At 31, he would be only a temporary solution, but no striker better understands Sarri's system and how to profit from it than Higuaín, and that makes him an astute short-term solution for Chelsea.