The warning signs were there for Chelsea in January. Yet they decided to ignore them. Gonzalo Higuaín was who they needed, was who Maurizio Sarri needed. With him at the spearhead of the Blues attack, everything would be alright.

“This season he had some troubles but I think that's part of every player's career, you have your down moments,” Sarri said about the Argentine's disappointing six-month spell with Milan earlier in the campaign.

“We hope we can regenerate him quickly so he can pay us back with his goals. It's very difficult in January to find one of the most important strikers in the world. So I think the club is working very well.”

During his brief stay at San Siro, the Argentine striker, one of the most prolific over the last decade, struggled. After an early flurry of goals his form soon tailed off. Higuaín looked sluggish, off the pace, and went into Serie A's winter break with just one goal in eight.

“He’s the first to be disappointed by the situation,” Rossoneri boss Gennaro Gattuso said in December. “He needs to give us his experience and character, his goals come after that. In difficult times the priority isn’t goals, but leadership, he needs to carry his teammates even if some make mistakes.”

Gattuso was willing to be patient with Higuaín. The Milan hierarchy were not and decided to move for Krzysztof Piątek, the 23-year-old Genoa striker who had struck 13 goals during the first half of the season.

The Polish international was the other name on Chelsea's shortlist in January. The Blues needed a replacement for Álvaro Morata, loaned to Atlético Madrid for 18 months, and it came down to Piątek or Higuaín. The Blues opted for the latter, backed by the belief Sarri had in the 31-year-old from their time at Napoli.

It's clear that was the wrong decision, Chelsea's distrust in youth proven costly once again. Higuaín has netted just three goals since his arrival at Stamford Bridge, against bottom-of-the-table Huddersfield Town and Fulham, who are also relegated.

The lack of goals isn't, however, the biggest concern. It's Higuaín's failure to adapt to English football and lack of impact that is the big issue. He has drifted through matches, constantly on the periphery even when the Blues attack. He has averaged fewer than five touches in the opposition box per 90, and only just over one short on target per 90.

“He [Higuaín] said to me that it's difficult because the physical impact of the defenders here is really very strong,” Sari admitted at the start of this month. “I think he needs time, but we have no time. So we need him at his top level.”

Sarri may have backed his striker publicly but it's telling since those quotes the on-loan Juventus striker has started just one game; the victory over West Ham United in which Eden Hazard scored twice.

Against Liverpool in Chelsea's last league game, Hazard was used as a false nine. Olivier Giroud, meanwhile, was given 90 minutes against Brighton and Hove Albion at the start of April.

Chelsea won that game 3-0 and it was arguably their most convincing display in 2019. They were always in control of the game, were never troubled by the Seagulls, who admittedly are in awful form.

The importance of Giroud was highlighted in that match. The French striker has never been prolific but he is an excellent facilitator for those around him. Hazard has publicly admitted he prefers playing with the 32-year-old and a happy Hazard can be a devastating Hazard.

It's why, with four Premier League games and a Europa League semi-final to come, the World Cup winner must be Sarri's go-to striker. As the graphic below highlights, he is more involved in Chelsea attacks than the club's current No.9. 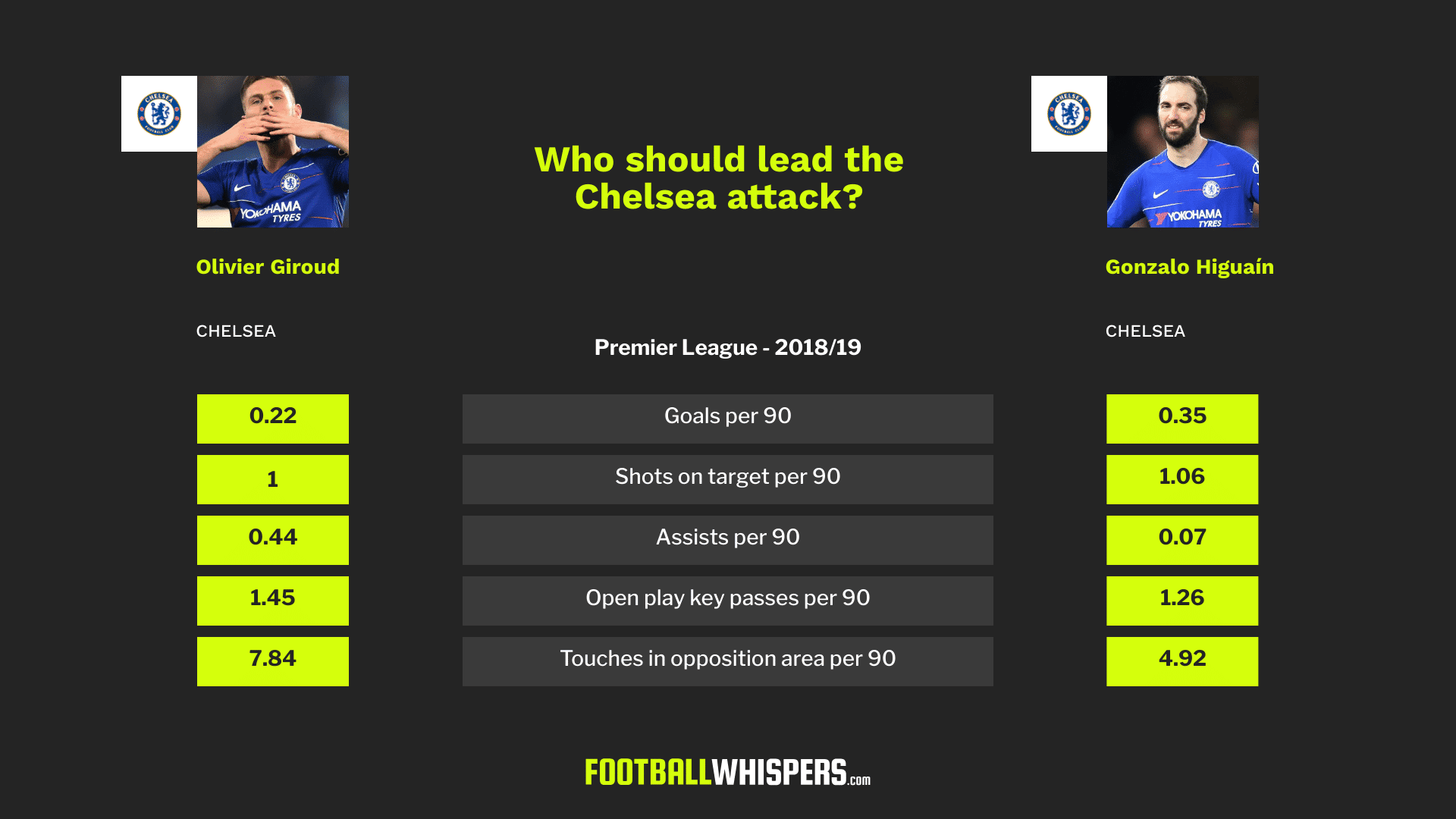 Making Giroud the first-choice striker is a decision that might irritate Higuaín but at this stage of the campaign, it is needs must. Chelsea can't afford another season out of the Champions League limelight.

And from a club point of view, it's important to keep Giroud onside.

Chelsea still don't know if they'll be able to sign players this summer; their transfer ban appeal is still being heard and no decision is imminent. But if the Blues can't bring in a new striker, they'll need the former Arsenal man.

“I am frustrated when I'm not on the pitch but I just don’t want to show it,” Giroud said ahead of Chelsea's Europa League clash with Slavia Prague last week.

“I am not happy to be the second striker. I don’t know if I will be here next season, you have to speak to Marina [Granovskaia]. I want to enjoy my football. My future must be decided by the end of the season.”