Second season syndrome is a term with baggage. It’s was initially used to describe the downturn in form of a club’s fortunes after a successful first season but was adapted to cover all things related to football. Managers and players are no longer immune to second season syndrome.

It’s traditionally a negative saying. But, as more imports arrive from leagues all over the world, it’s slowly turning into a phrase with positive connotations. These players arrive and take a season to settle in before showcasing their true talent during their second season.

Tottenham Hotspur's Heung-Min Son is one such player. His second season at White Hart Lane has surpassed his debut campaign in England and the £22million Spurs paid for him now looks like a bargain.

It's been quite the turnaround for the 24-year-old. Just 12 months after his move from Newcastle United on the final day of the season was the final nail in his coffin.

Matt Law went on to say: “The 23-year-old was dragged off at half-time in  for a performance that left some of his team-mates enraged and may have sealed his fate under Pochettino.”

It was reported that Wolfsburg wanted to bring the South Korean star back to the Bundesliga with Spurs targeting Crystal Palace winger Wilfried Zaha to replace him. Neither move materialised but Son's future in England was still up in the air as the summer transfer window closed.

It was revealed by the Times that the versatile attacker asked to leave the club after returning from the Olympics. But Mauricio Pochettino rejected his request – a decision which looks increasingly shrewd by the week.

Speaking after netting a double against Middlesbrough early in the season it was clear the Argentine manager's words had an impact on the former Hamburg forward.

“I am very happy now,” Son said. “It was good to talk to the manager. All I have wanted to do is play in the Premier League, it is the best league. I am very happy to stay here and to be out on the pitch.

“I wanted to ask him to play more. This is true, every player wants to play games. The gaffer gave me a chance and I am very grateful to him, he has given me this chance to play. I am very happy now. He was very honest with me.”

In a cruel twist of fate it was Harry Kane's injury in September which was the springboard for Son's resurgence. He stepped in during the absence of the Spurs talisman and delivered in a central role with summer signing Vincent Jansen failing to impress.

His two goals against Watford at the weekend took him into double figures in the Premier League. He has 11 league goals to his name compared to last season’s three and he's matched the four assists from the 2015/16 already.

He's played 419 more league minutes – more than four matches extra – than last season. In his maiden campaign Son averaged a goal every 276 minutes. This year he's finding the back of the net every 152 minutes. A marked improvement.

Goals aren't the only area of his game which has improved during his second season in England. He's attempting 0.8 more shots, 0.5 more key passes and completing 0.7 more dribbles. He's not just more involved, he's much more effective in general.

He's back to his Bayern Leverkusen form which saw him score 21 league goals in just two seasons.

Why Son's form isn't a flash in the pan

The real question for a player in form is whether or not they can sustain it. Is it just simply form or is this class they're showing permanent?

When analysing Son's performances it's clear to see it's more than just a purple patch. He's got great technique, he can use either foot and he's appears to be one of the most intelligent players in the league when it comes to manipulating space.

In Dele Alli and Son Spurs have two players who have perfected the art form of finding space and arriving late into the penalty area. It guarantees goals. 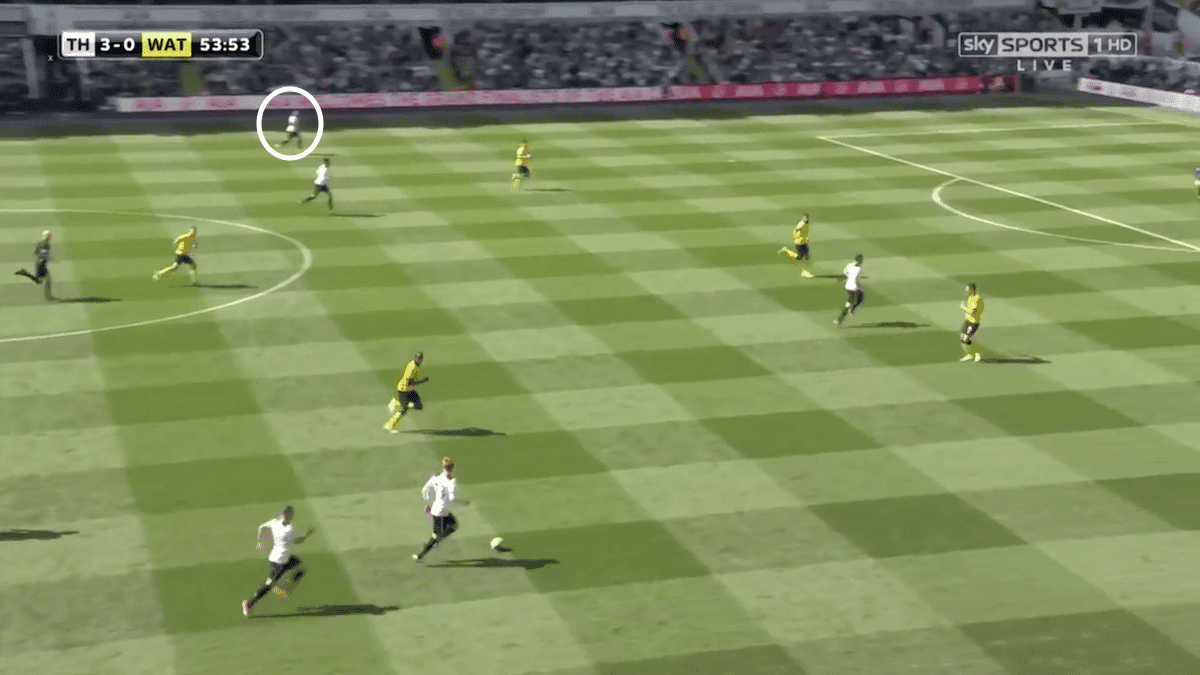 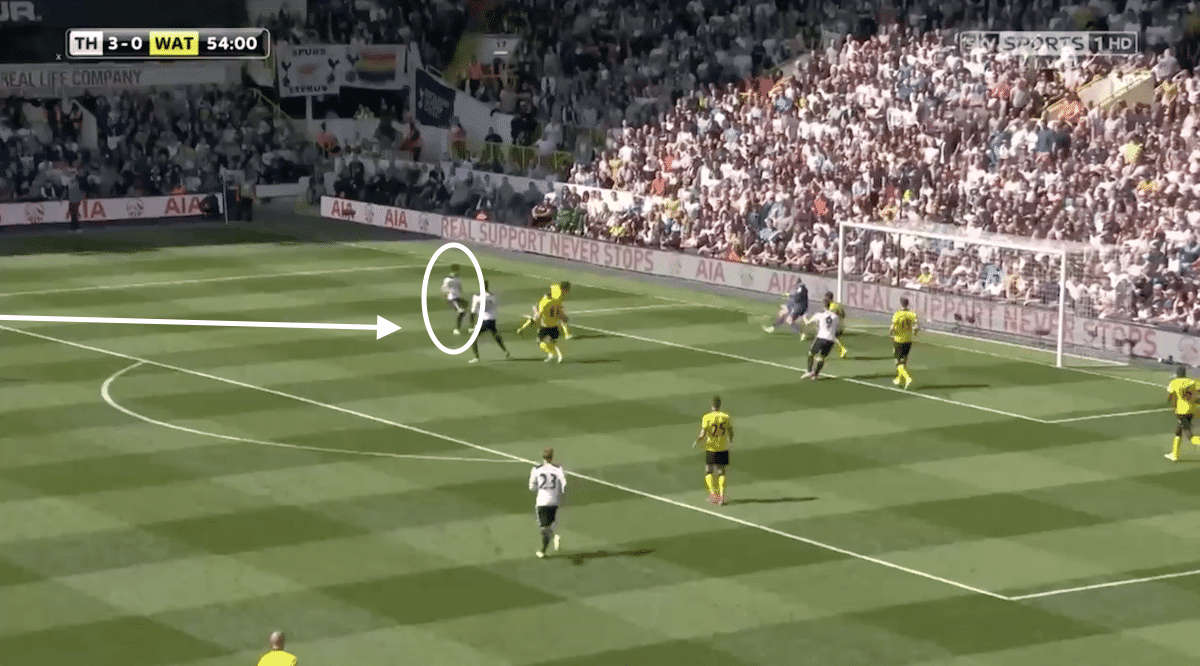 In the two pictures above, taken from the 4-0 win over Watford, you see Son's movement prior to his second goal. In the first picture you see him circled in a  wide right area.

As play progresses the ball is worked into the box and in the second picture you see the South Korean in the Watford penalty area firing the ball home.

Coaches and pundits are forever talking about the need for wide players to get into the area and show real desire to put the ball in the back of the net. However, more often than not a wide player in this scenario lingers on the edge of the area and doesn't show the ruthless streak Son does. Spurs benefit from it and their goal difference is improved because of it. 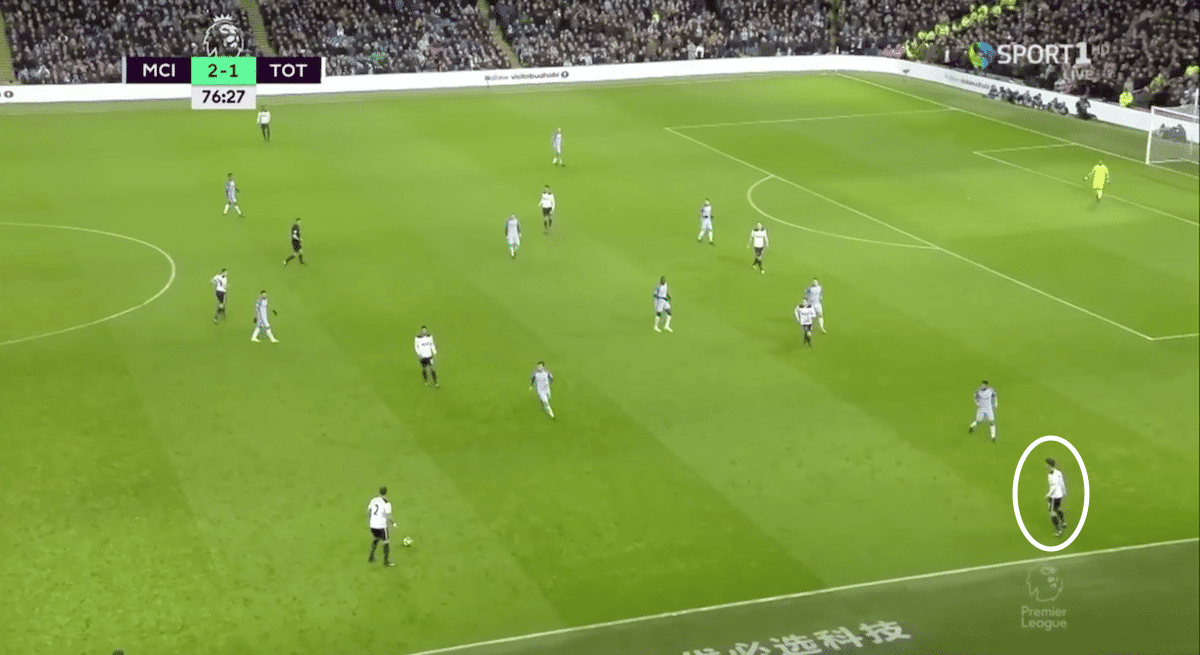 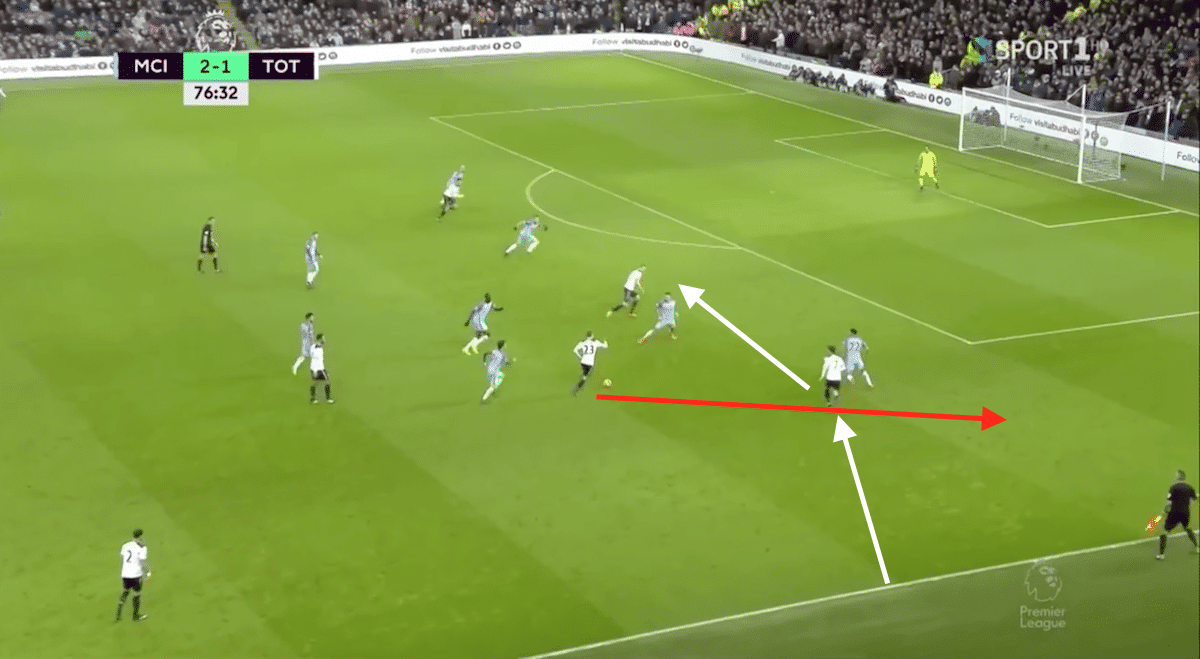 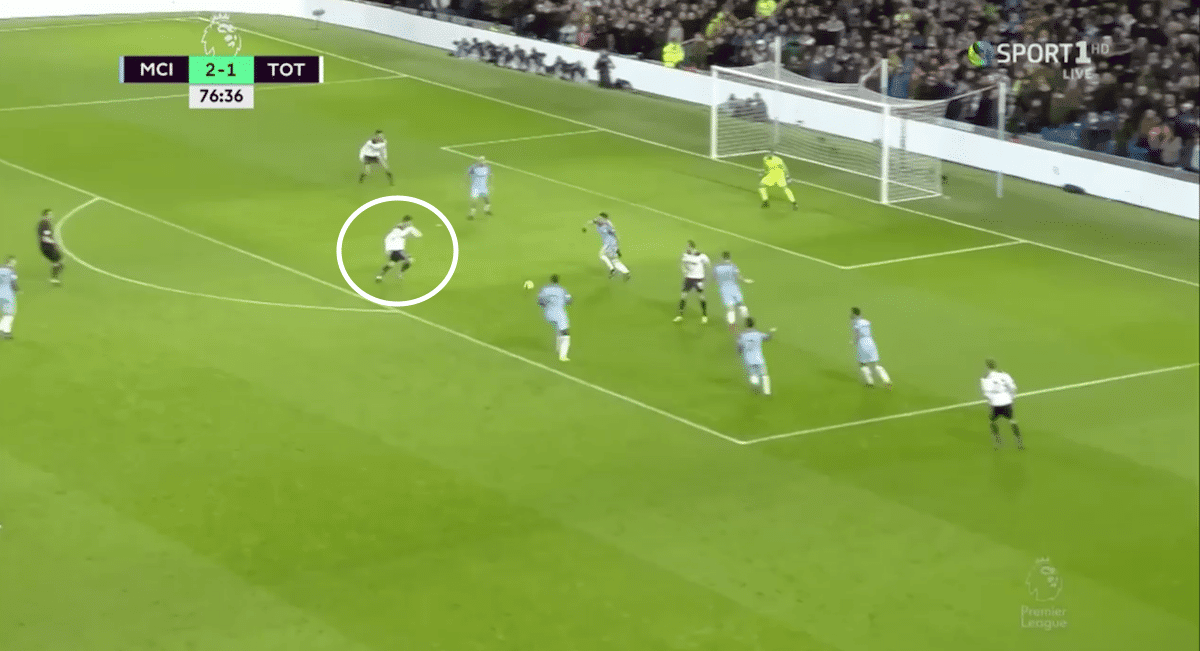 In the three pictures above, taken in the build up to Son's goal in the 2-2 draw with Manchester City at the Etihad Stadium, you get to see what the Spurs no.7 excels at.

His selfless, intelligent movement creates the opportunity and results in him rounding off the move and getting the away side back into the match.

He starts off hugging the touchline which stretches the Man City left-back, Gael Clichy. As Christian Eriksen picks the ball up Son makes his move. He runs across the face of the former Arsenal full-back and drags him centrally which creates space down the Tottenham right. Eriksen attacks that space and the home side are all drawn to the ball.

Son's movement is straightforward; he just runs into the space in the penalty area. The Danish playmaker picks him out and he fires home the equaliser.

Alli and Kane are rightly lauded for their performances. But Son's contribution shouldn't be ignored. He's scored big goals for Pochettino's side. In his current form – as goal scoring threat from wide areas who puts in a shift defensively – he's arguably a £50million player.

He's only going to get better and everything is in place for him to have an even better third season in England.