Struggling Hertha Berlin take on the challenge of an equally unreliable Borussia Monchengladbach at the Olympiastadion on October 23. Both sides are separated by two points and two positions, leading to question marks about the men in charge of the respective dugouts.

Here are our predictions for Hertha Berlin vs M'gladbach.

Adi Hutter is finding it difficult to justify his move from Eintracht Frankfurt as Borussia Monchengladbach continue to struggle. The Colts have found success of late, going unbeaten in their last three fixtures. We are backing them to add to Hertha's woes, continuing their four-match unbeaten run against the capital club.

Three of the last five duels between Hertha Berlin and Borussia Monchengladbach have concluded with Over 2.5 total goals. We are expecting a similar conclusion to their upcoming meeting. Confidence is high in the eventuality as all eight of Hertha's Bundesliga fixtures have seen at least three goals during the 90 minutes of regulation action.

Gladbach and Hertha have scored ten goals apiece in their eight Bundesliga outings, whilst conceding 11 and 21 goals respectively. The bulk of these has come in their last five fixtures, as both sides average 1.6 goals against their names after a slow start. With their defensive issues yet to be reconciled, expect both sides to concede in this meeting.

Hertha Berlin vs M'gladbach: Check out the best odds and the latest stats

Hertha Berlin avoided the drop with an end of season rally that was only bettered by Bayern Munich. Pal Dardai would have hoped to avoid a repeat of similar circumstances but has failed to rouse his charges from an induced sleep. They have the worst defensive record in Bundesliga thus far and need to act upon it to get their campaign back on track.

Adi Hutter does not have defensive ailments at Borussia Park with 11 goals conceded. However, it is at the other end of the pitch where his charges are continuously letting him down. With a paltry 10 goals scored, they are moving further away from their Champions League ambitions with every failure.

Questions About Hertha Berlin vs M'gladbach 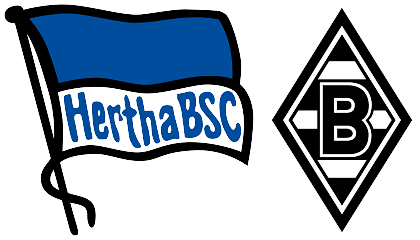 Where is the game being televised? Viaplay, Sky Bundesliga and Sky Sport Football.